You may have noticed the massive influx of NVMe SSDs with the Phison PS5012-E12 controller just coming to market. There are many, and the supply is plentiful. These market conditions have helped to lower E12-based SSD pricing at a quicker rate than many other SSDs, like those from Samsung and others using Silicon Motion controllers. This is great news for shoppers and performance enthusiasts, and we want to show you why today. 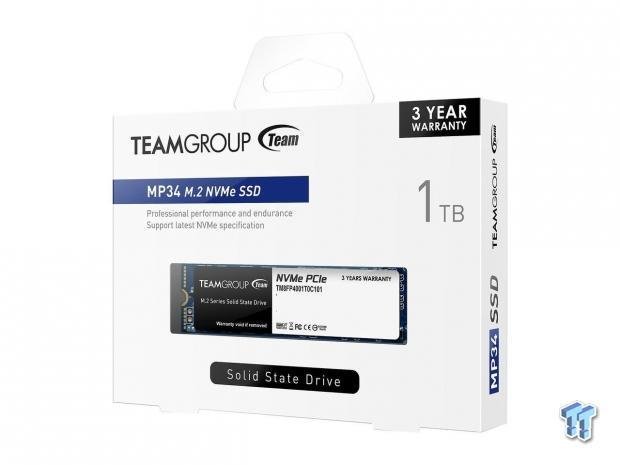 The Team Group MP34 is a new to market well-priced NVMe SSD that delivers disproportional performance. We can't call this reference design product unique; there are several others similar. That's not an issue for us, and it shouldn't be for you, either. The Team Group MP34 starts at just $39.99. That's a full $20 less than the PNY CS3030 we reviewed last week.

Team Group used CrystalDisk Mark to measure base performance for the MP34 specifications. The numbers are down compared to similar products on paper, but we didn't notice any abnormalities in testing. Most of our four-corner results surpass the specifications by a decent margin.

The MP34 series ships with similar endurance we see from other E12-based drives. Team Group backs the series with a 3-year warranty, and that's two years less than some of the others. 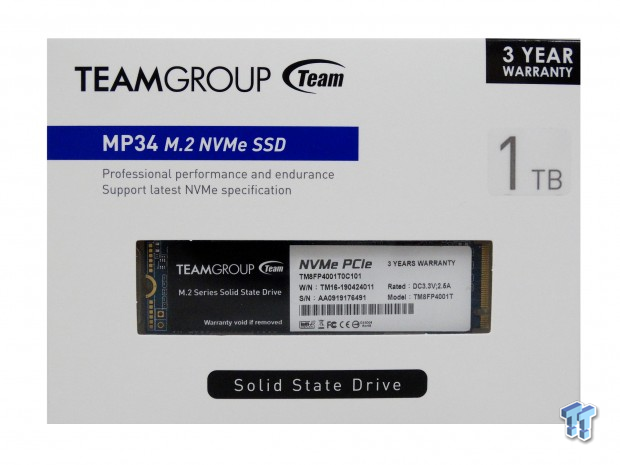 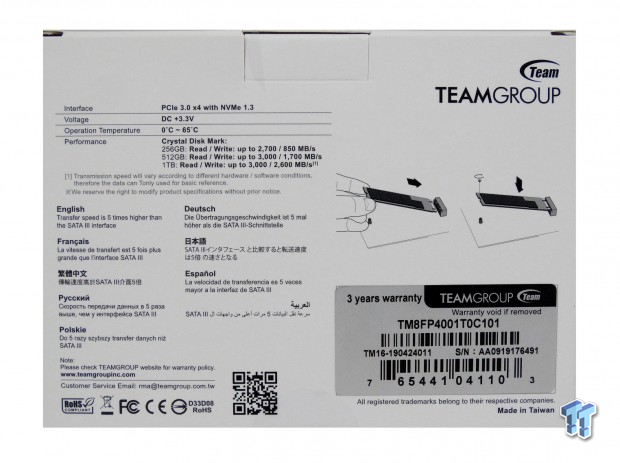 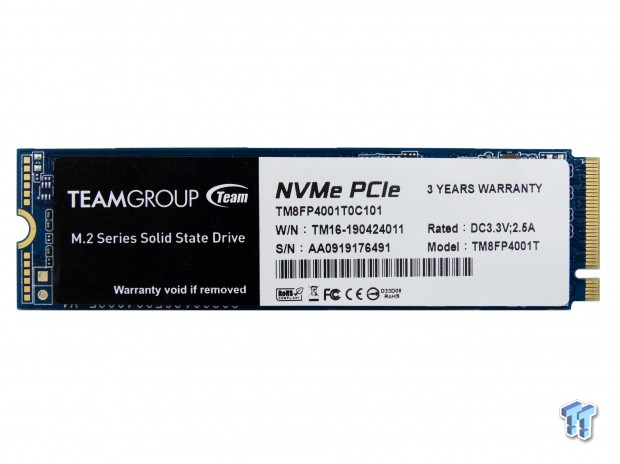 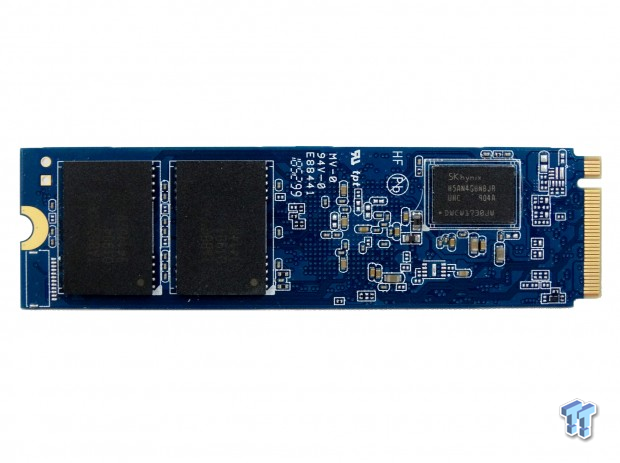 The Team Group MP34 is a no-frills series that lets its performance and low price do the talking. The series ships in a retail ready package but the drive doesn't feature a heat sink like many of the new E12-based drives that recently came to market. 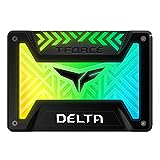 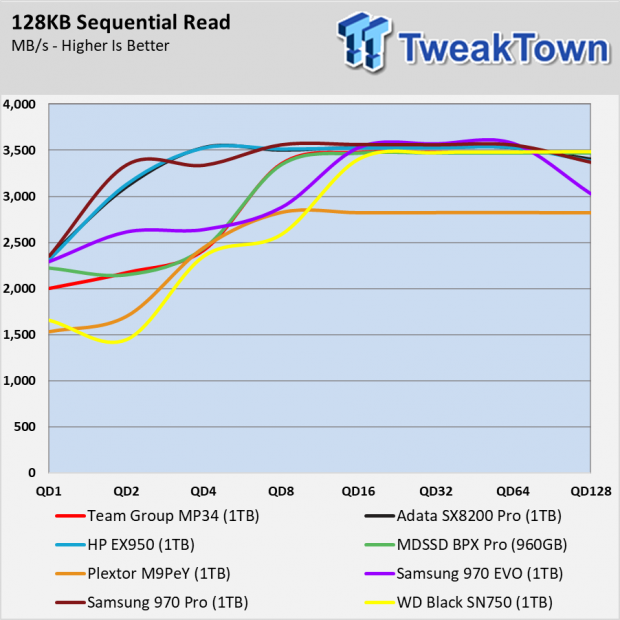 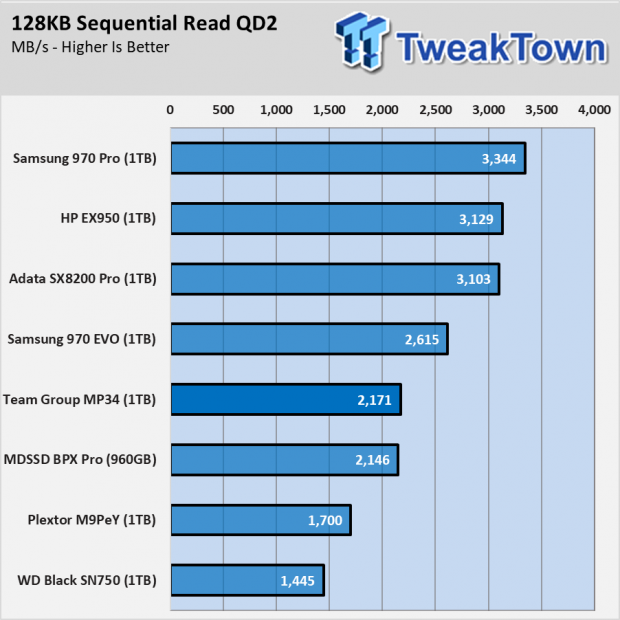 The Team Group MP34 shows the same issue with our testing as every other Phison E12-based drive. The queue depth 2 and 4 results are low but it's actually not the drive. Other testing software shows different results. We will look at low queue depth sequential read performance later in the review. 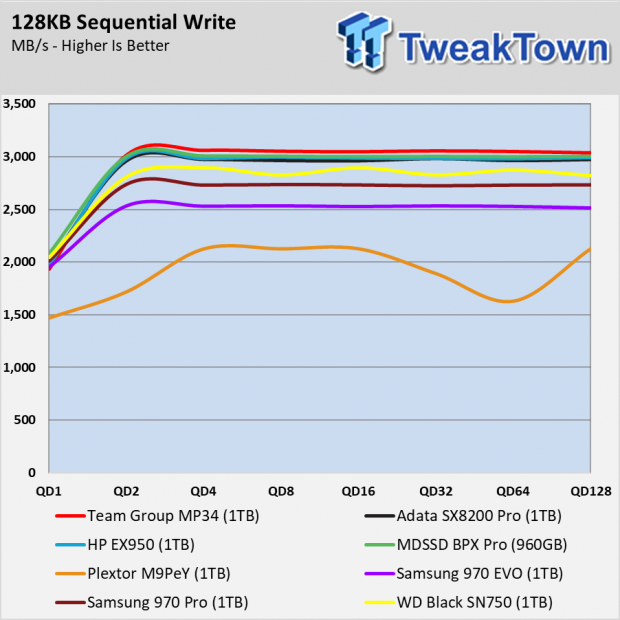 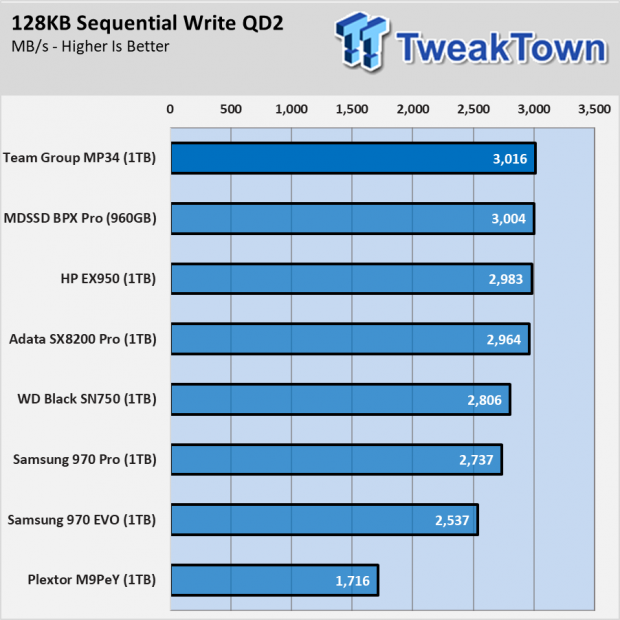 The 1TB MP34 outperforms the other drives in sequential write burst performance. There is tight competition, but as you can see, the MP34 pushes well past the 2,600 MB/s rating. 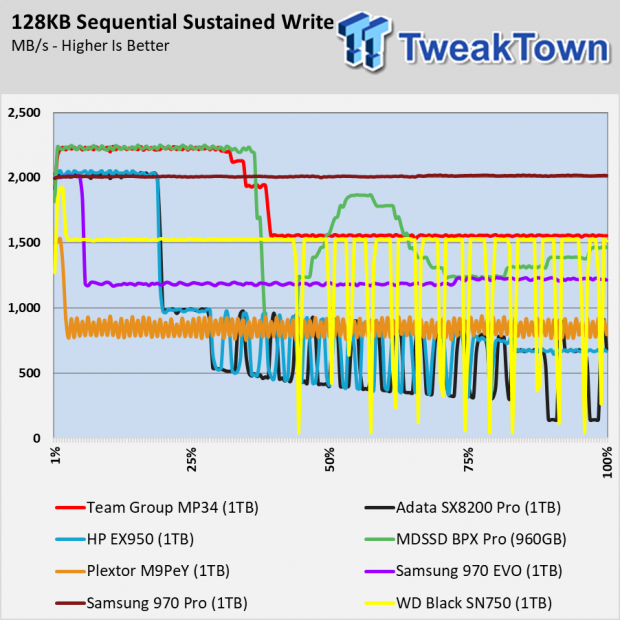 The write performance is a bit different from what we found with the MyDigitalSSD BPX Pro. The two share close to the same amount of SLC buffer space in this test but the MP34 doesn't show the sharp drop off. The TLC write performance is more consistent on the trailing end of a long sequential write. 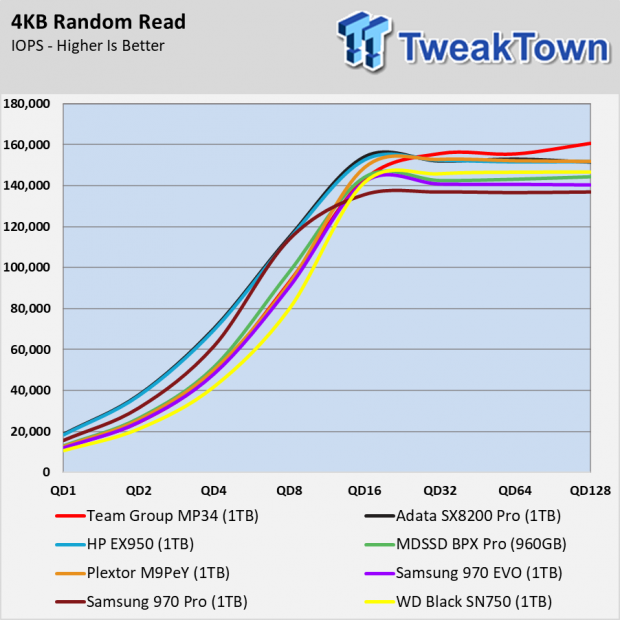 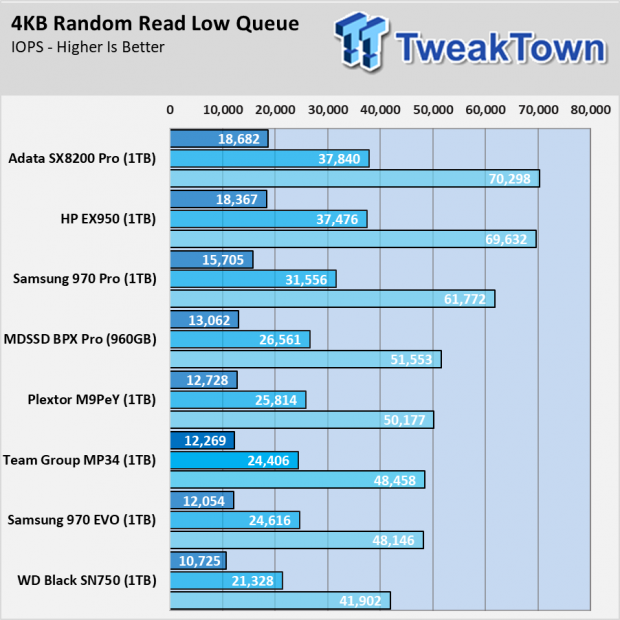 Team Group's MP34 delivers just over 12,000 random read IOPS at QD1. The drive scales well and doubles the random read performance at QD2 and then again at QD4. 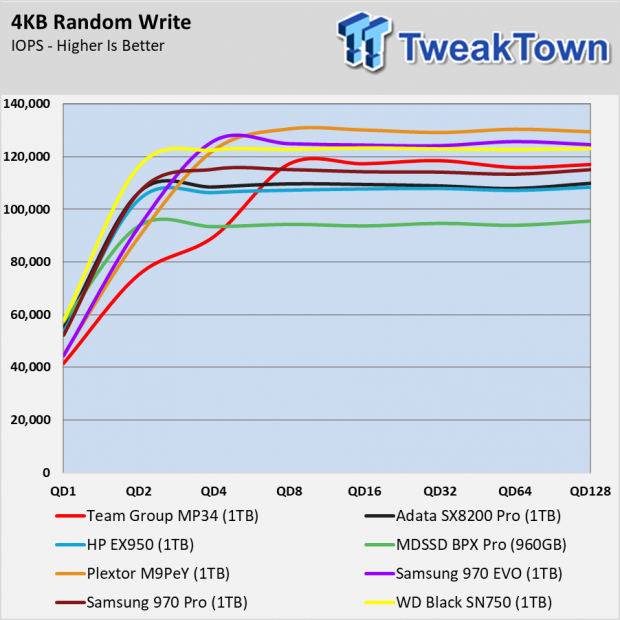 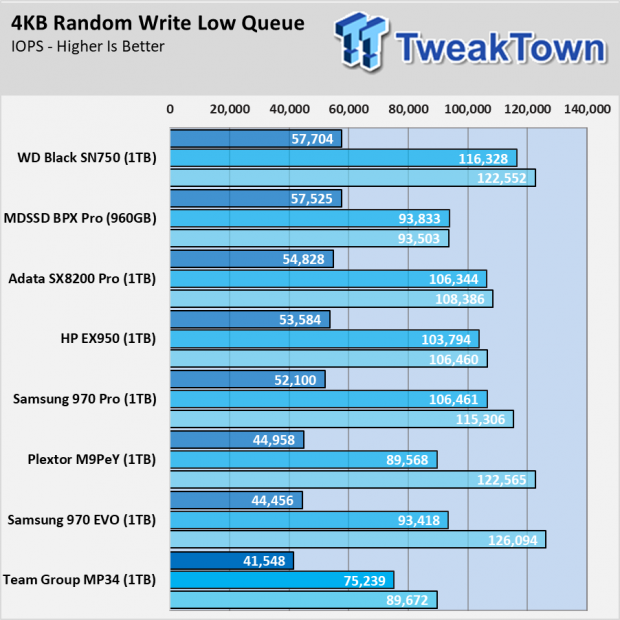 Some of the recent changes to firmware and the hardware has also changed the E12's random write performance. We saw a similar write profile on the 1TB PNY XLR8 CS3030. The low queue depth performance is much lower than the BPX Pro, but the peaks are much higher. 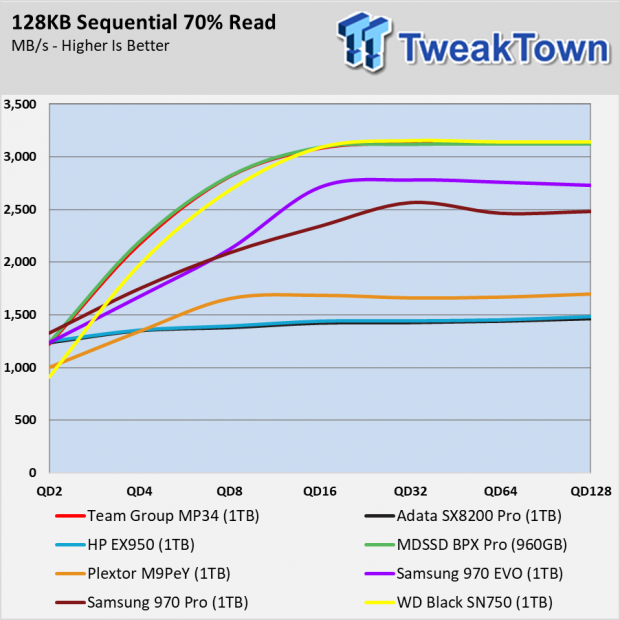 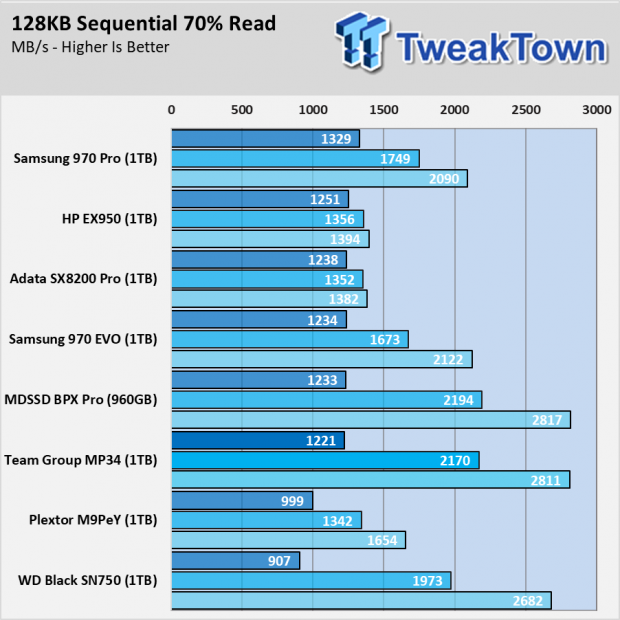 We can't say that about every area of performance. For instance, the new Team Group MP34 and the BPX Pro show identical sequential mixed workload performance in every queue depth. Both drives show an excellent profile on the ramp up that is unmatched by the other drives in the charts. 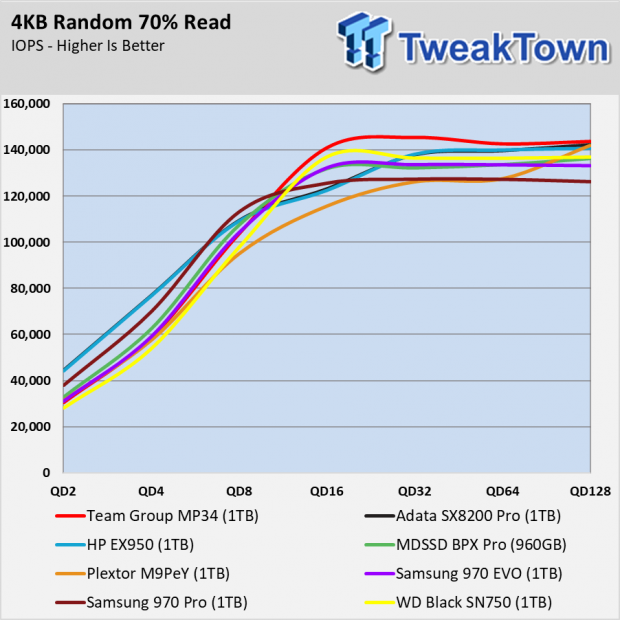 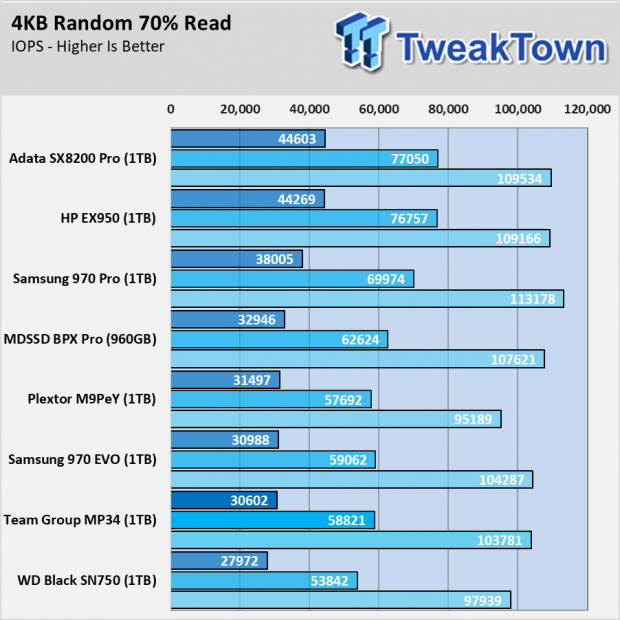 For most of the scale-up in our random mixed workload test the MP34, BPX Pro, and a few other drives, how very similar performance. At higher queue depths, the MP34 shows it can scale slightly higher before leveling off at QD16. 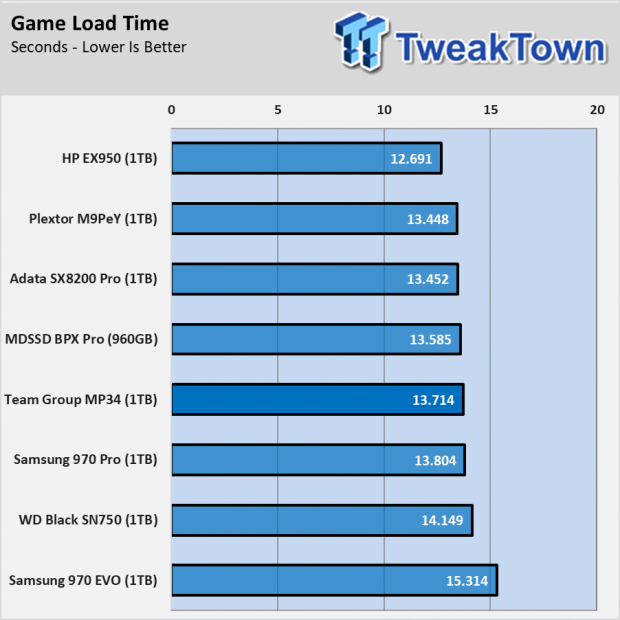 On this page, we move over to real workloads. The first is loading scenes from the game Final Fantasy: Stormblood. The 1TB Team Group MP34 performs well in this test, loading the scenes in less than 14 seconds total. 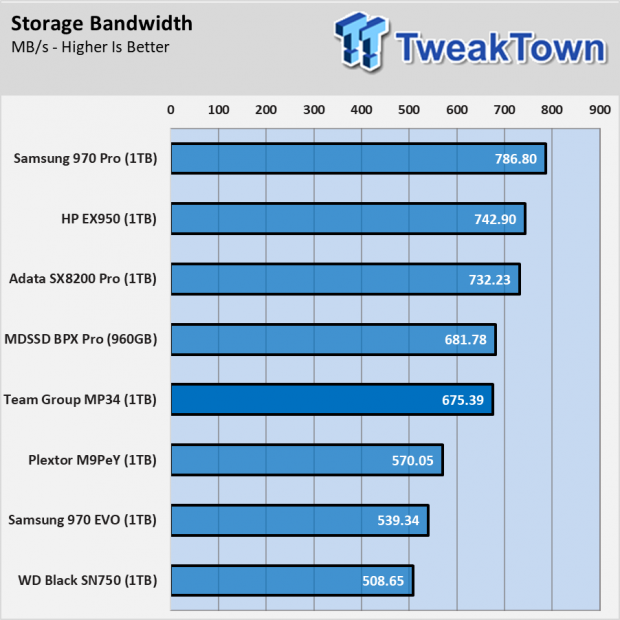 The PCMark 8 Storage Test uses a wide range of applications that we put into an average throughput score. The 1TB MP34 performs around the same as the other E12-based drives we've tested like the BPX Pro and the PNY CS3030 from last week. 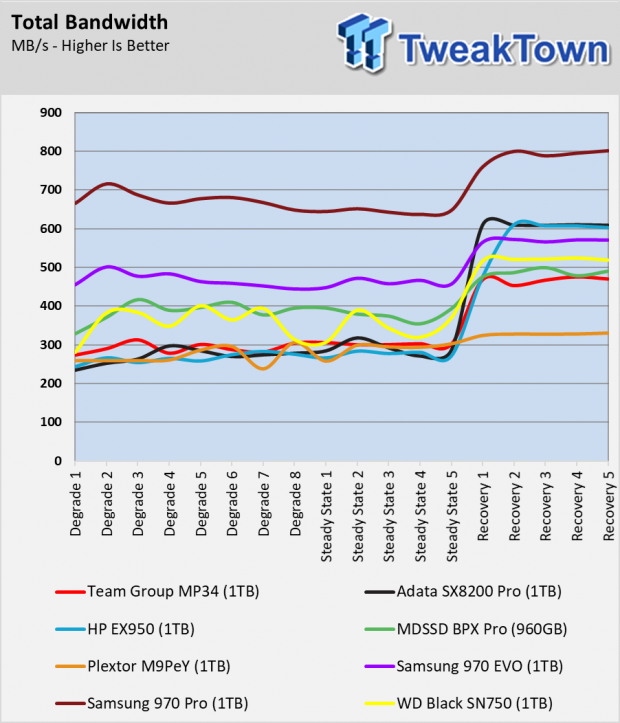 The PCMark 8 Extended Storage Test uses the same nine applications as the previous test but starts with by preconditioning the drives into a dirty state. The applications run in different stages with the recovery phase being the most similar to a drive after you've put some miles on it, so to speak. This is where we see a much larger divide between the BPX Pro and the newer MP34. Both perform about the same in the recovery phases, but the MP34 doesn't have the same performance under heavy workloads. 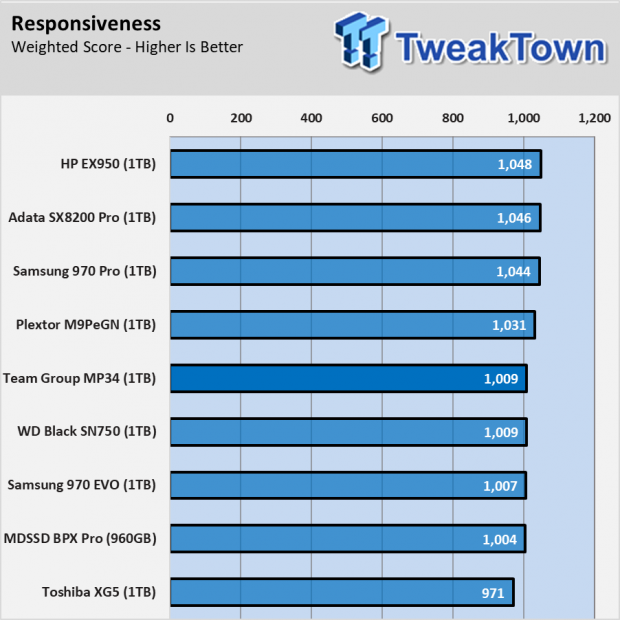 The Responsiveness Test comes from the SYSmark 2014 SE suite that uses real-world applications in an office environment. The software walks the PC through a typical day in the office all the way down to the coffee breaks.

In this test, we want the highest score possible, but anything over the base score of 1,000 is good for a modern SSD. The 1TB MP34 breaks past the barrier that we determine to be acceptable in our Lenovo Y700-17 gaming notebook. 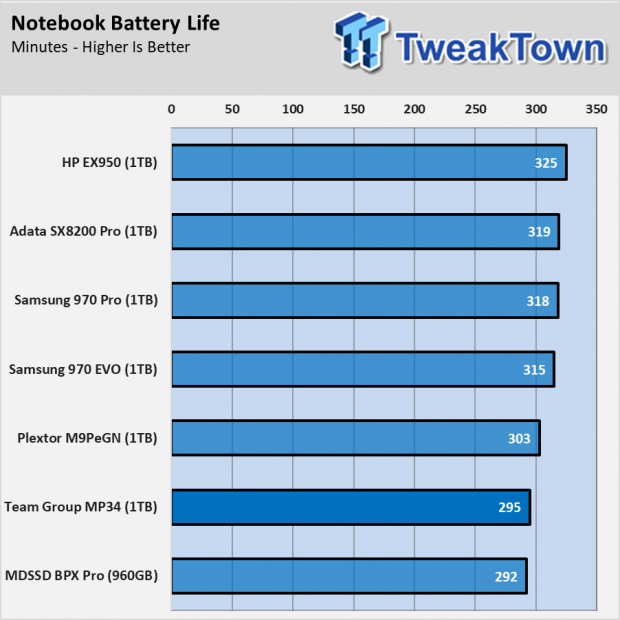 We use the same notebook in our battery life test. The software changes to MobileMark, and it uses a typical office day model. Notebook battery life is the weak link with Phison E12 SSDs. The 1TB MP34 gets close to, but doesn't surpass the 5-hour mark.

The Team Group MP34 we tested today sits in a strong position. This isn't an elite performance SSD with a premium price point to match. Instead, this bang-for-your-buck product delivers more bangs for less bucks. 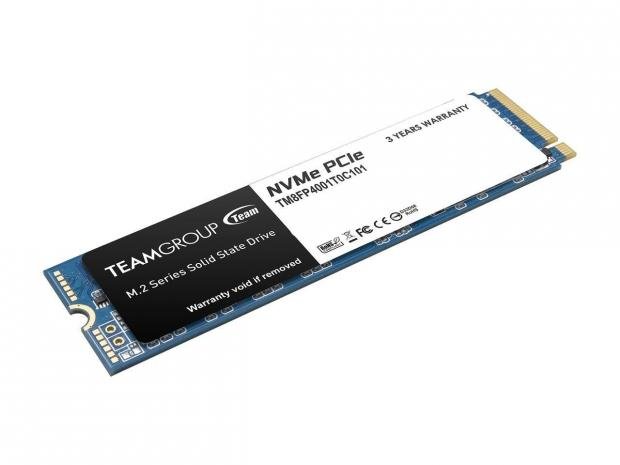 Value-focused NVMe SSDs are not new. The Phison E12 has led the way in this segment since it first came to market. These drives are now as low as the QLC NVMe models like the Intel 660p and Crucial P1, but they are not far off either.

Spending a little more, gives users a better experience with moderate workloads. The harder you push the drive, the more it gives back in lower response times compared to the ultra-low-cost QLC products shipping today.

We tested the 1TB model, but the other capacities with the E12 controller perform well in relation to the other comparable products. With prices starting as low as $39.99 for the 256GB MP34 model, there isn't a reason to buy a SATA SSD unless your system doesn't support the speedy NVMe interface.

Team Group takes the MP34 to new heights for TLC-based NVMe SSDs. This drive fights the low-cost QLC models and delivers greater performance. Starting at just $40, it's difficult to even consider a SATA SSD at this point.