Gigabit ethernet has long outlived its welcome in SOHO NAS platforms but for the longest time consumer infrastructure has been lacking the supports for anything more. With the release of 802.11ac and now 802.11ax consumer routers are ready more than ever for a 2.5Gbe future. To this point, nearly every vendor that pushes an 802.11ax or Wi-Fi 6 router will have a solution with at least a 2.5GBE LAN connection.

Making the jump to 2.5GBE in a "mainstream" platform, Asustor created an entirely new segment aimed at creators, gamers and enthusiasts that would enjoy the ability to save livestream content to their NAS along with typical media; music, photos, and video. The Nimbustor lineup includes both 2 and 4-Bay models and is really the second generation of Asustor' "enthusiast" appliances with the 4002 and 4004T of 2018 being first gen. Moving from the first generation units, Asustor took a step back and came back with a gaming angle full of glossy black plastics and dragons breathing fire.

As for the hardware, I'm happy to say Asustor didn't cut corners offering a Celeron J4105 from the Goldmont Plus family, operating at 1.5GHz burst to 2.5GHz paired with 4GB of DDR4 upgradeable to 8GB. The J4105 also carries with it UHD 600 Series graphics and Asustor includes support over HDMI. Onboard eMMC carries a 4GB capacity, plenty for storing the OS, currently ADM 3.4.

Further supports include four SATAIII drive bays compatible with 2.5 and 3.5" drives, max internal raw capacity is 54TB using 14TB drives. The Nimbustor 4 does support use of three AS6004U expansion units bring total capacity to 16 drives and 224TB. Expansion is done over the three USB 3.0 ports two on back and one on front. Ethernet connectivity is provided by two 2.5GBe ports both supporting Link Aggregation. The Included HDMI port is 2.0a compliant supporting 4K output.

The Nimbustor 4 offers a class-leading three-year warranty. MSRP comes in at $479.99 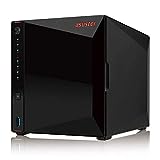