We already declared the end of SATA SSDs for enthusiasts, but the assault has trickled down to the mainstream. With deep price cuts to existing products, there is only a sliver of space for a company to bring up a mainstream NVMe SSD, and we think WD hit the target. 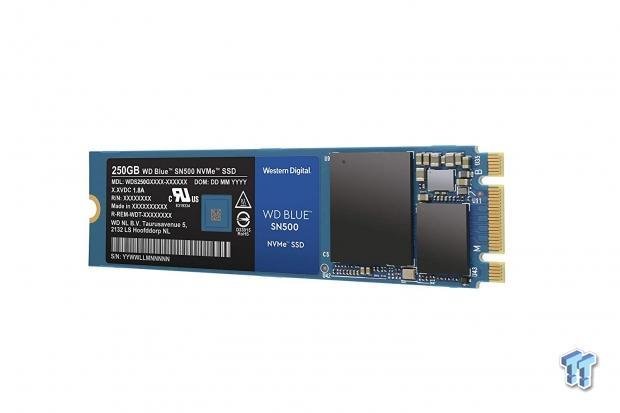 On the technical side, there are only two paths to make a mainstream NVMe SSD today. The first we've seen from Intel and Crucial. Both companies used 4-bit per cell memory on the SSD 660P and P1. There products results are what we expected. Crucial has a DRAM wing in the company and managed to undercut Intel's pricing on a similar product because Intel's doesn't have the luxury of in-house DRAM.

Western Digital doesn't have an in-house DRAM manufacturing business but still wants a mainstream NVMe SSD to compliment the premium Black SN750 NVMe. Instead of increasing the BOM cost to purchase DRAM, the company simply found a way to do without the expensive component. This brings us to the second way to make a profitable mainstream NVMe SSD today, go DRAMless. 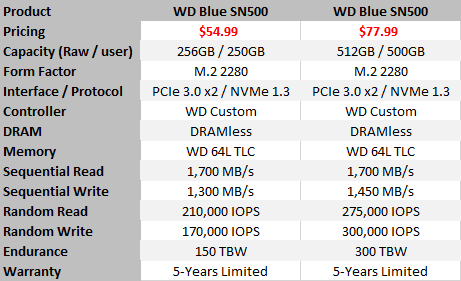 To keep costs down and to focus on the mainstream, the new WD Blue SN500 NVMe SSD only ships in two capacities, 250GB and 500GB.

The performance comes from a custom WD controller that first started development under SanDisk before the acquisition. The PCIe 3.0 x2 controller uses a DRAMless design, but it does not take advantage of Host Memory Buffer technology (HMB) to increase performance. HMB uses a small amount of system memory to cache the SSD's table map and is all but standard now for DRAMless NVMe SSDs.

WD hit a strong balance between performance and cost with the Blue SN500 NVMe Series. The 250GB model starts the series out at just $54.99. The larger 500GB model reaches just $77.99. Both capacities carry an impressive 5-year warranty that we usually find reserved for premium models.

The Blue SN500 endurance is the weakest part of the warranty. The series includes just 150 TBW for the 250GB drive, but that does double to 300 TBW on the larger model. 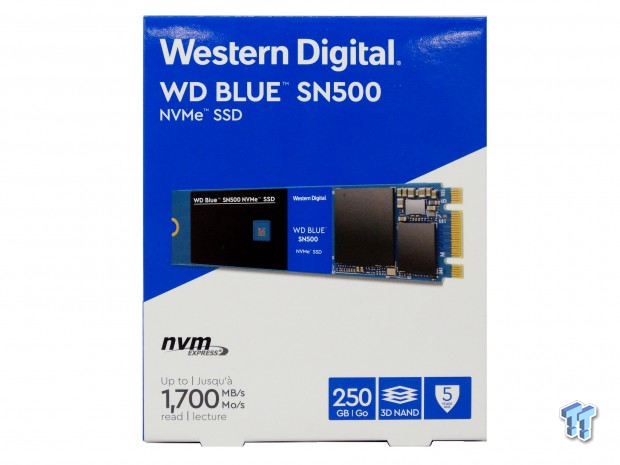 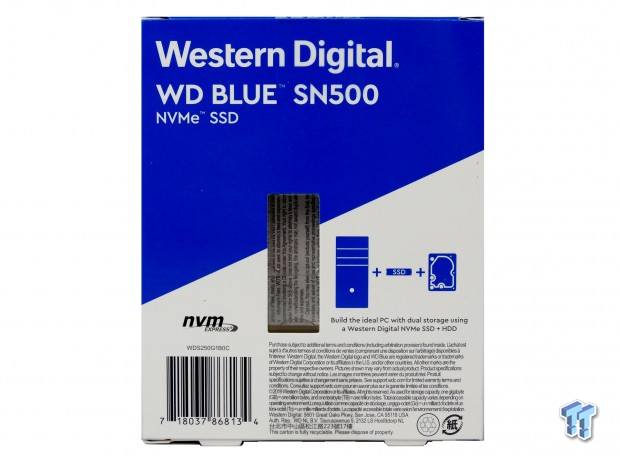 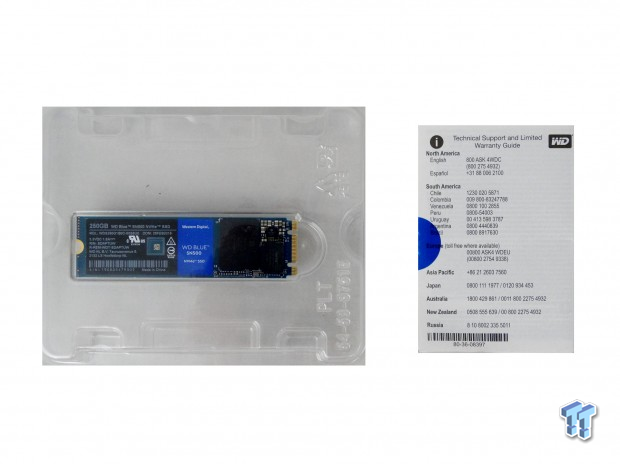 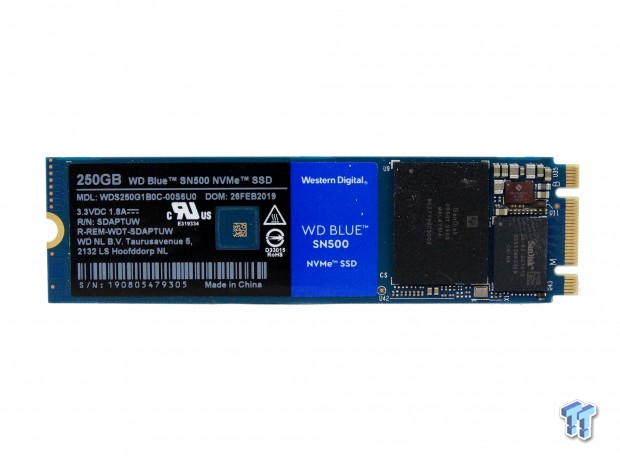 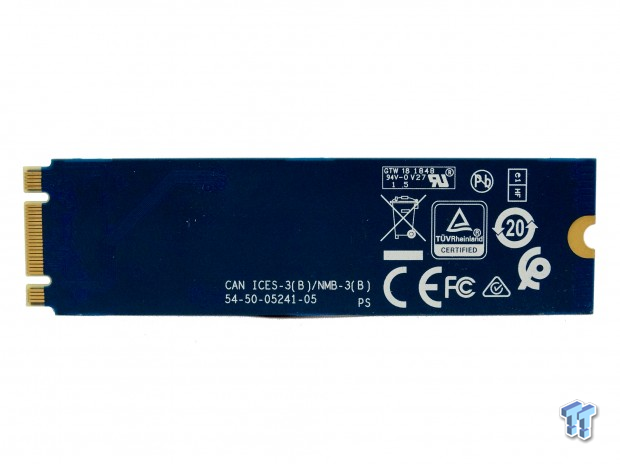 WD stuffs all of the components in a small section of the drive. There are only two main packages, the controller and the flash. 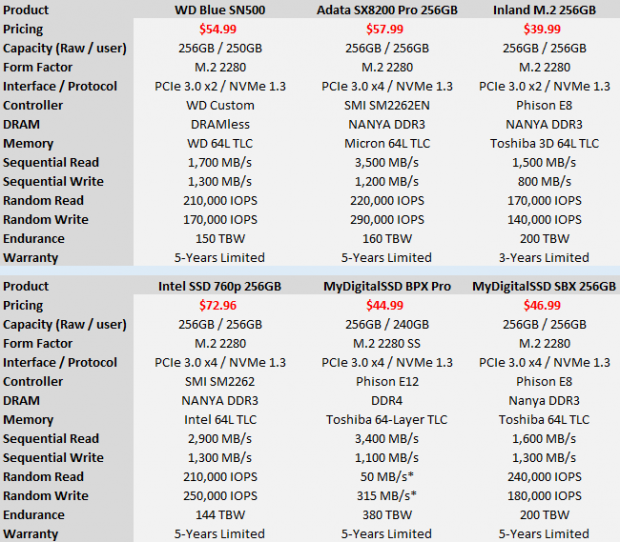 The new 250GB SN500 doesn't stand up very well against similarly priced models shipping today. Prices have fallen so low that the window between premium SATA and premium NVMe is really just a sliver compared to what it was last year with 256GB class models. We expect to see the SN500 price to shrink over time, as with all new SSDs. That hasn't happened just yet with this new release, but the other drives in this review have all hit record lows. 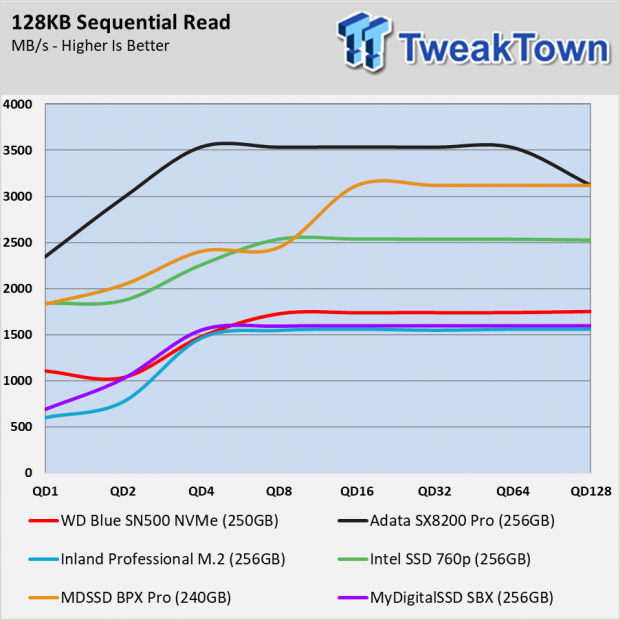 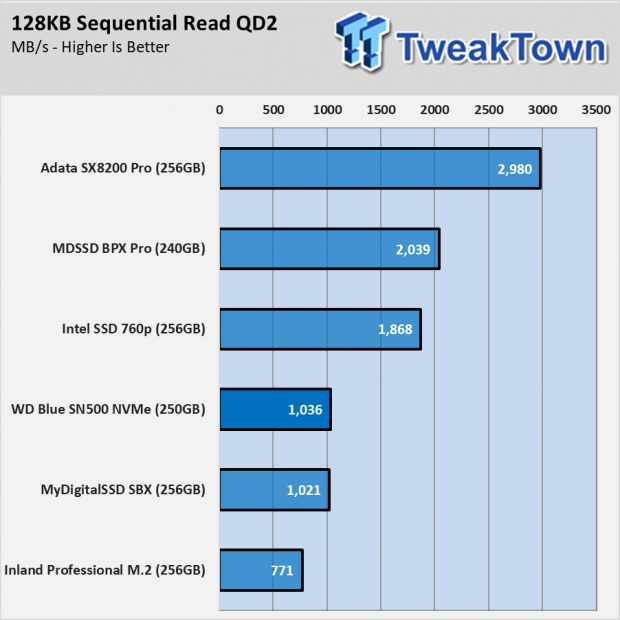 The new WD Blue SN500 NVMe delivers similar sequential read performance that we found in other purpose-built entry-level and mainstream SSDs. The PCIe x2 interface doesn't allow the drive to reach the same sequential levels as the drives with twice the available bandwidth. 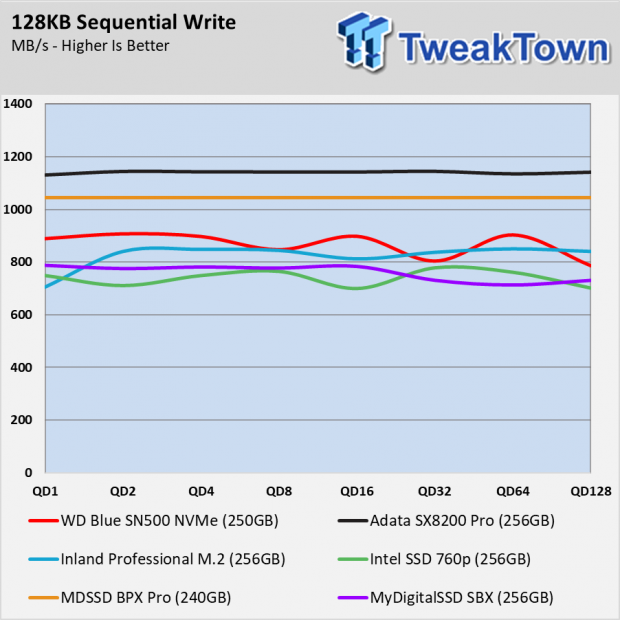 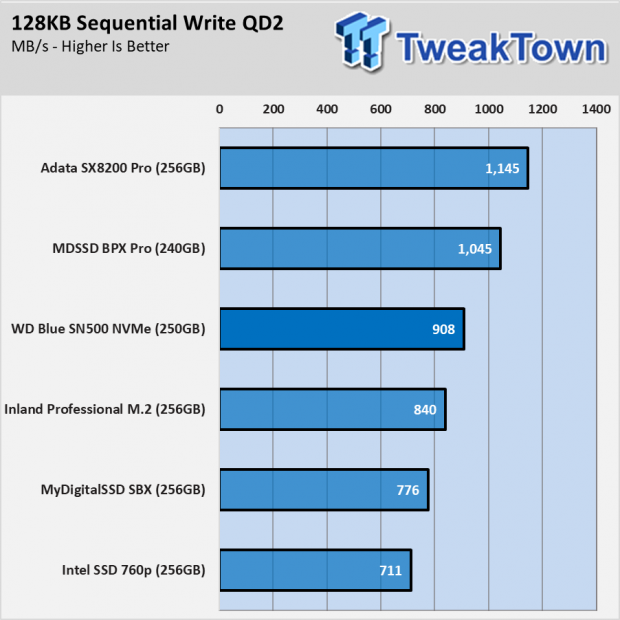 We can say the same when it comes to large block size sequential writes. The SN500 delivers better than expected sequential write performance. The small number of flash die limit the write performance of modern 256GB SSDs. We point to the SN500 outperforming the Intel SSD 760p (with a x4 lane interface) and use the results to show how efficient BiCS FLASH can be. 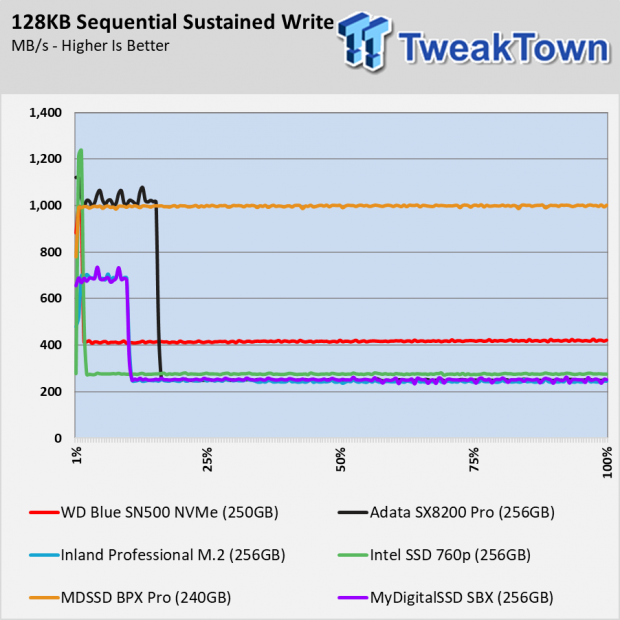 The 250GB SN500 uses a relatively small SLC buffer size compared to many of the new controller designs with dynamic buffers. The cache is large enough for incoming random data but doesn't do a lot for your large block size files, like movies and music. The native TLC write performance is just over 400 MB/s, around 100 MB/s higher than many other SSDs in this capacity. 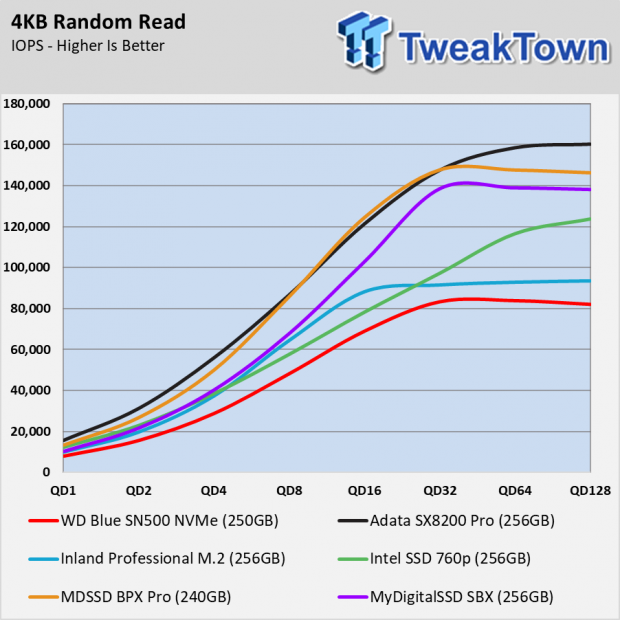 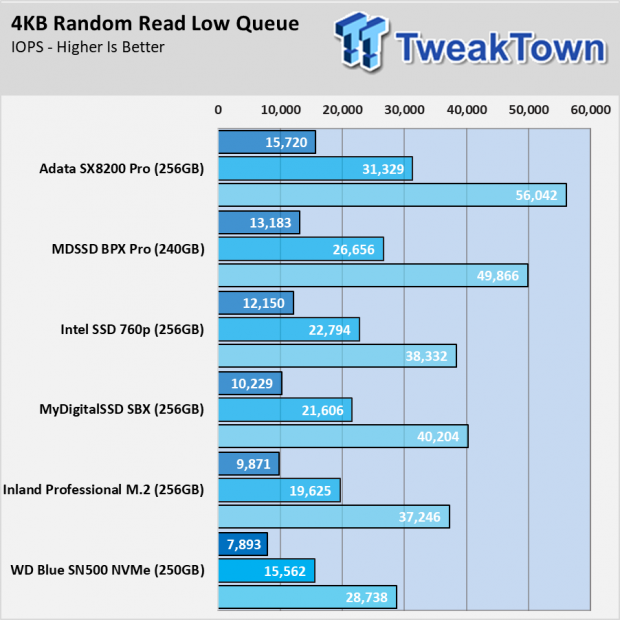 Of the drives tested for the charts today, the 250GB SN500 delivers the lowest random read performance. At QD1, the drive doesn't hit 8,000 IOPS and that's unfortunate in a world where mainstream SATA SSDs surpass 11,000 IOPS at the same queue depth. 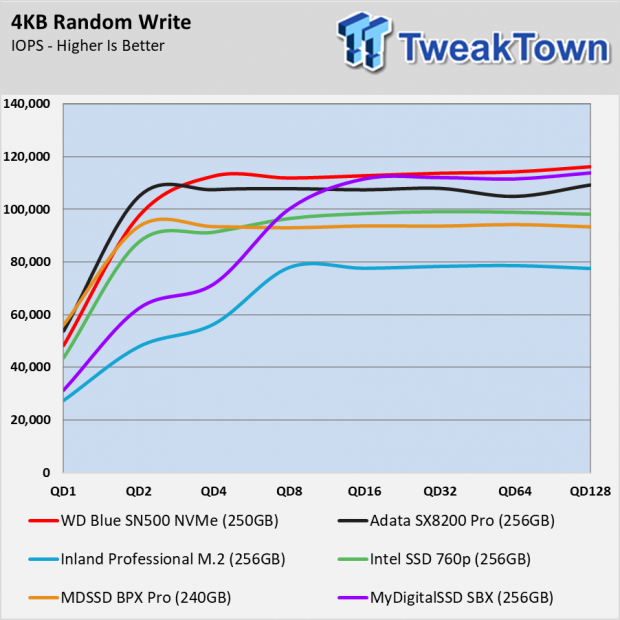 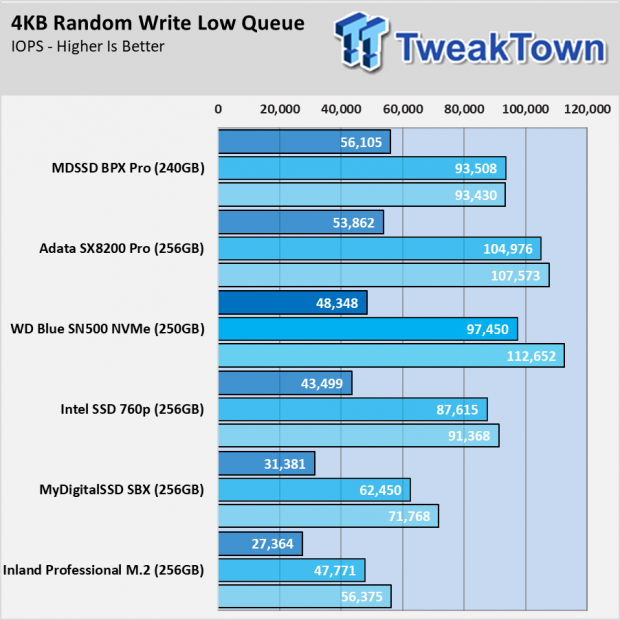 We asked a WD representative about host memory buffer technology and were surprised to learn the drive doesn't use this technology. The drive still performs well in small block size random data writes. It performs much better than we expected, but we do foresee some issues with mixed random workloads without the technology. 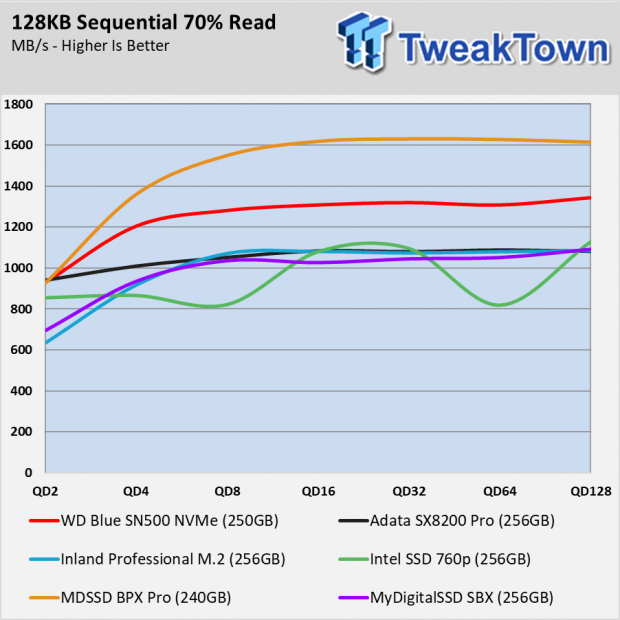 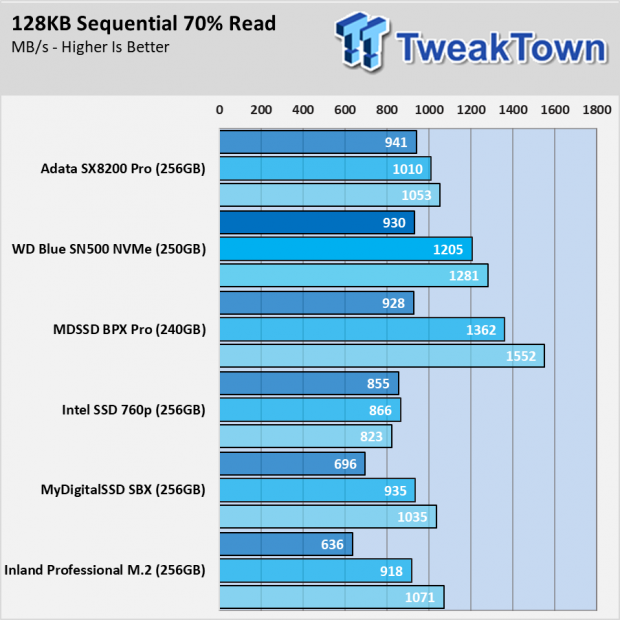 Despite its interface disadvantage, the SN500 delivers strong sequential mixed read and write performance. The drive outperformed nearly every other drive on the chart other than the MyDigitalSSD BPX Pro with a similar controller architecture. 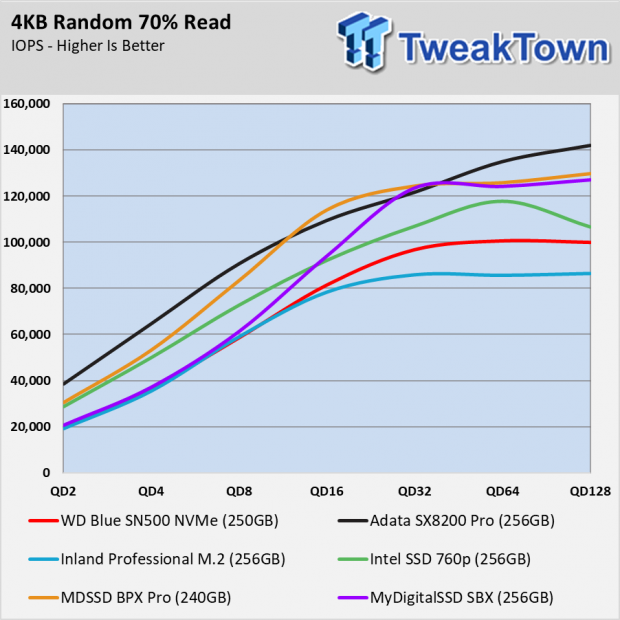 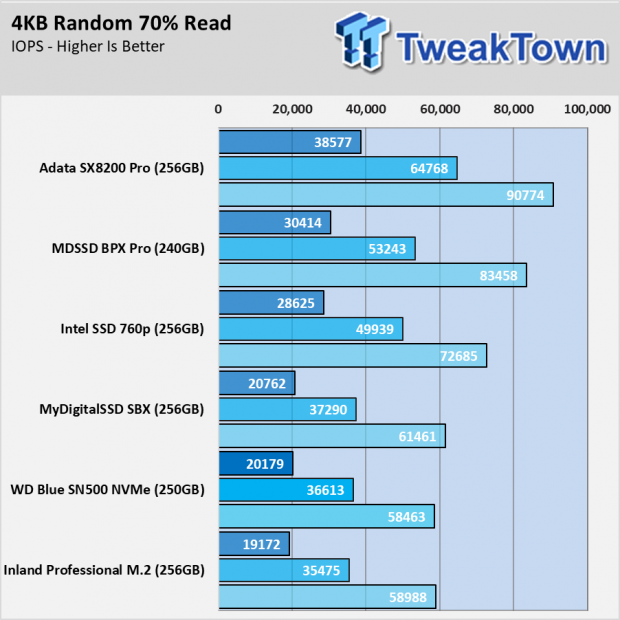 The weak random read performance is difficult to overcome in the mixed test with 70% reads. At lower queue depths, the SN500 is in line with the other mainstream NVMe SSDs on the chart. 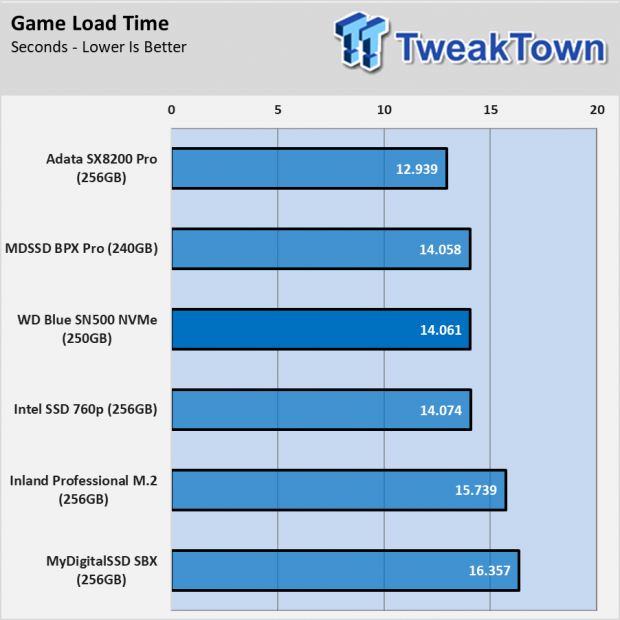 Loading video games on your PC is far from the most strenuous activity for your storage system. SSDs accelerate performance a great deal over hard disk drives, but most have learned that moderately priced SSDs are more than capable of delivering excellent performance. The 250GB SN500 delivers strong game loading performance in our Final Fantasy: Stormblood test. 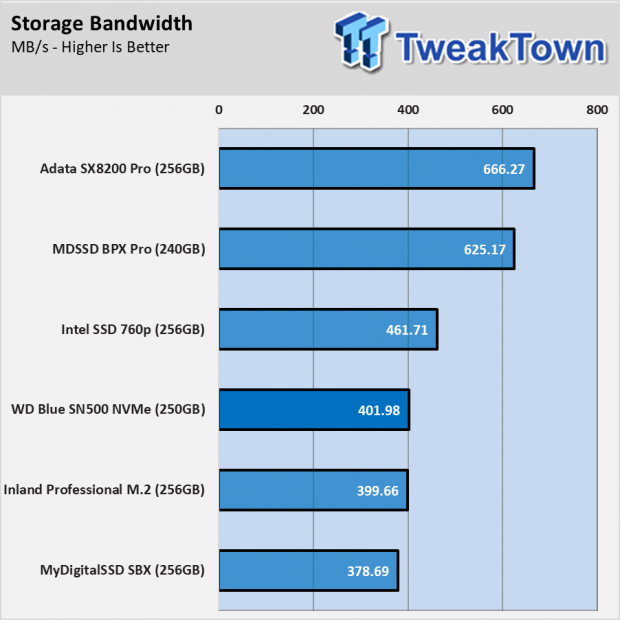 The PCMark 8 Storage Test uses a wide range of applications to measure disk performance. We take the individual results and present them as an easy to read throughput score.

The 250GB SN500's score of 401 MB/s bests every SATA SSD we've ever tested thanks to the drive's ability to read and write sequential data at a higher rate than what the SATA bus is capable of. 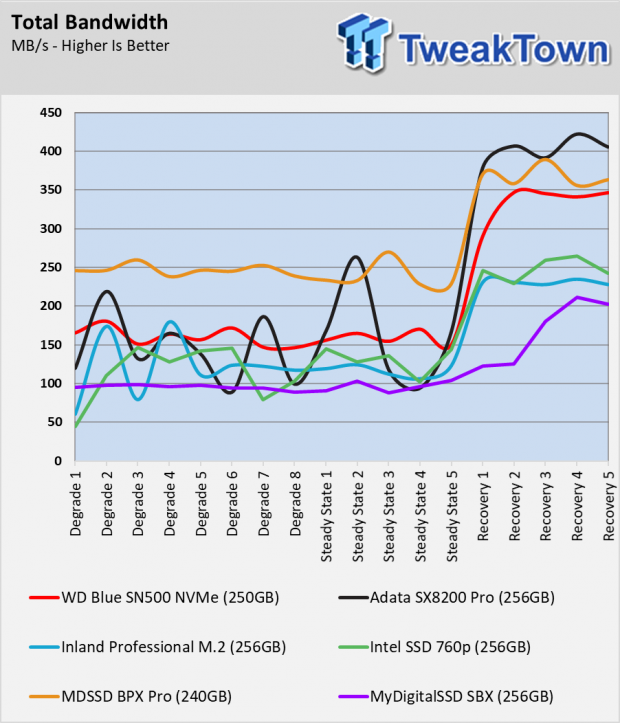 The PCMark 8 Extended Storage Test uses the same applications as the standard test but starts the automated process by pushing the drives into a steady-state condition. From there the test starts and continues to work the drives in the degraded performance state. The recovery phases of the test are what we focus on with consumer SSDs. This state injects 5-minutes of recovery time that allows the drives to perform background cleanup operations to increase performance. We're looking at how long it takes a drive to recover performance after the heavy workout.

The 250GB SN500 recovers well in our testing and easily outperforms the other purpose-built mainstream NVMe SSDs. The performance during the recovery phases is closest to the two premium models, SX8200 Pro and BPX Pro. 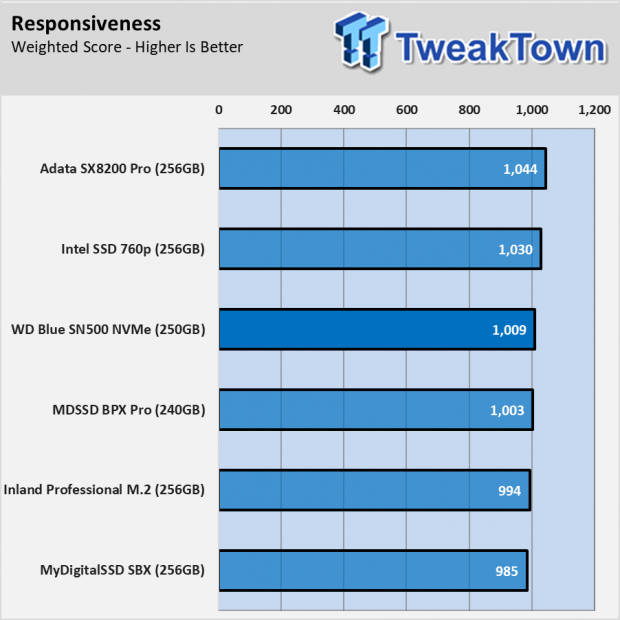 The SYSmark 2014 SE Responsiveness Test from BAPCo measures disk performance from a latency perspective to show the user experience. The base score, 1000, was set in a system using an OEM version of the Samsung 850 EVO. The new WD Blue SN500 NVMe delivers slightly higher responsiveness compared to the base system. 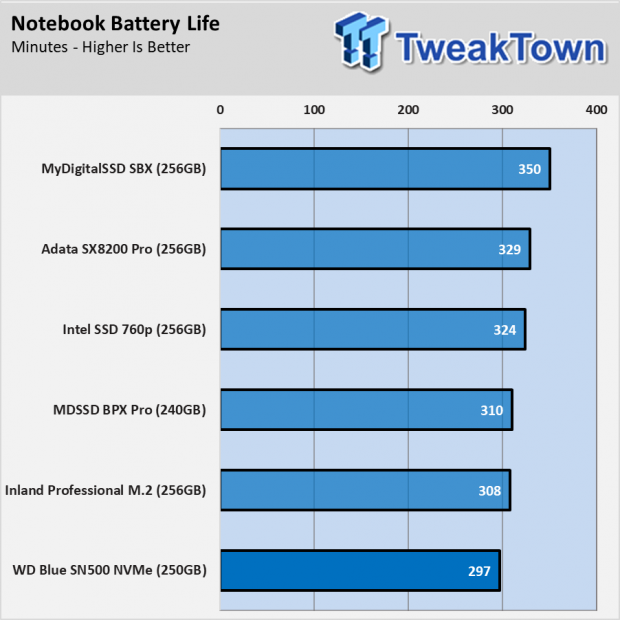 BAPCo also developed our notebook battery life test. We use MobileMark for this test with a Lenovo Ideapad Y700-17 gaming notebook for this test. The 250GB SN500 delivered just under 5 hours of "on" time with the office-focused workload. This is below average for all SSDs (SATA drives usually produce better results) but just at the tail end of NVMe models.

WD took another SSD designed for the OEM market and repurposed it for the aftermarket. As SSDs move closer to commodity products, we'll see this this practice continue until there are no longer any true enthusiast SSDs. For the most part, all of the flash fab companies have moved in this direction. Toshiba (and with it the remains of OCZ), Micron, Intel, WD (with SanDisk) and even Samsung currently sell SSDs first designed for the large system builders and relabel a few for retail shoppers. 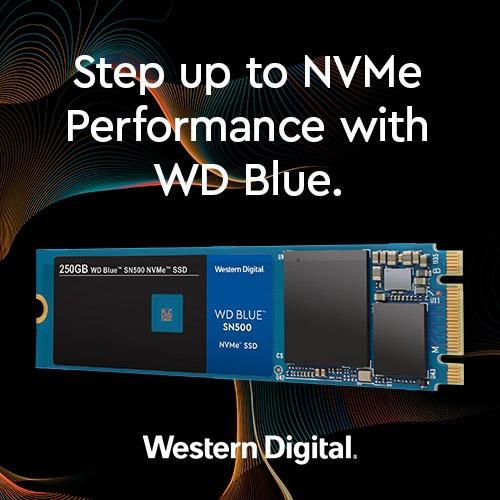 We've seen some good drives come to market under this practice, but for the most part, these are retail products held back by system builder requirements. For instance, the system builders want single-sided designs, but more flash packages lead to better performance and lower prices (from less die per package). That's why we see WD, a company with the ability to pump out hundreds of thousands of drives, having a difficult time bringing a product to market to compete on performance and price with MyDigitalSSD that isn't concerned with meeting the system builder template.

The industry has made great strides in putting a boot on the throat of consumer SATA SSDs. For enthusiasts, we've already declared SATA dead with the release of Micron's P1, Intel's SSD 660p, and MyDigitalSSD's BPX Pro. These drives closed the price gap between mainstream SATA and mainstream NVMe. The new WD Blue SN500 NVMe just piles on. The Blue series from WD is the very definition of mainstream when it comes to computer storage, it's the benchmark. If you needed a sign for the end of 2.5" SATA as the industry standard, you have it now.

As an upgrade, the WD Blue SN500 NVMe isn't a giant leap in performance over most existing drives. Some could be argued that even some SATA SSDs can best this model in general use workloads due to the low random read performance. That said, for a new system build the Blue NVMe is a strong low-cost choice for shoppers. It's not the best, it's not perfect, but it is a name you know from a company you can trust.

A name you know from a brand you trust. The new WD Blue SN500 NVMe is a low-cost mainstream SSD with a strong warrnty and SATA killing performance.