For those that have been tinkering with memory as long as we have, Corsair is no stranger when it came to getting some of the best clocks attainable. In the DDR days we hunted down the TWINX sticks, with DDR2 we opted for the XMS2, which is where top fins started for Corsair. With DDR3 and DDR4, if you wanted the best Corsair had to offer, you simply opted for the Dominator kits. Nearly seven years Corsair has delivered various aesthetic implementations of what they though the Dominator line has needed to evolve as time goes by, but we have to say, it will be hard to top what they have given to us to test.

We have, in our hands, the Dominator Platinum RGB DDR4, and it is one of the many kits available from Corsair. Densities can be had in as little at 16GB or as large as 128GB, and speeds range from 3000MHz up to an amazing 4800MHz, but keep in mind, as density increases, speeds are kept lower. Out of that group, we have what everyone considers the sweet spot for DDR4, and that is a 32 GB kit of 3200MHz memory with 14-14-14 timings in the CMT32GX4x4C3200C14 we were sent.

This is not just any ordinary Dominator RAM from Corsair. Not only have they redesigned the shape, style, and look of the heat spreaders, they have also added more fins across the top of the sticks, while keeping the top bar similar to others. On top of that, the Dominator Platinum RGB memory had individually addressable RGBs, which can be controlled with motherboard lighting software, but is also fully controllable via iCUE, Corsairs all-in-one software for all their RGB needs. In what you are about to see, your gut will lead you to want to buy this kit, but we still need to have a closer look, gauge the performance, and see if the cost is justified. 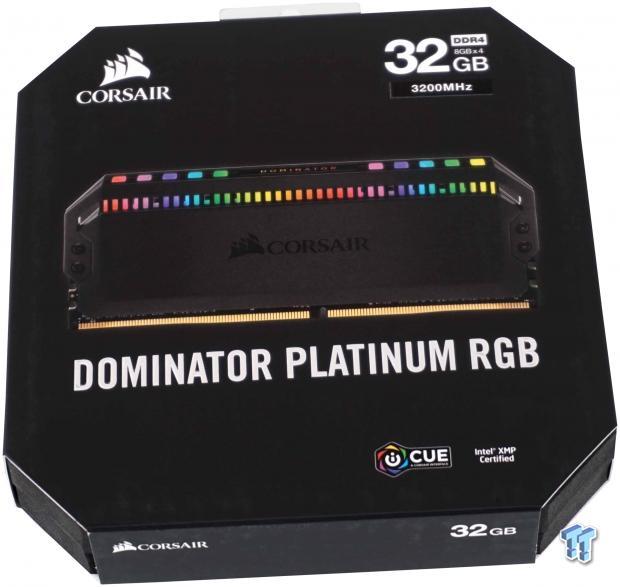 Our 32GB kit of 3200MHz Dominator Platinum RGB memory comes in high-end packaging, with a cardboard sleeve showing the DIMM in life-size, wrapped around two layers of dense foam. In each layer of foam is a pair of plastic clamshell packs, which keep the modules in place, and well protected from harm in transit. 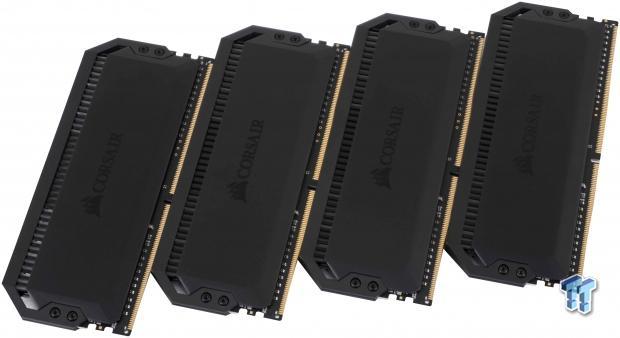 The package contained four sticks, each with 8GB of density, with the black on black on black murdered out aesthetic. The top bar and fins are black, the anodized aluminum spreaders are black displaying the Corsair name in black, and even the 10-layer PCB is black. 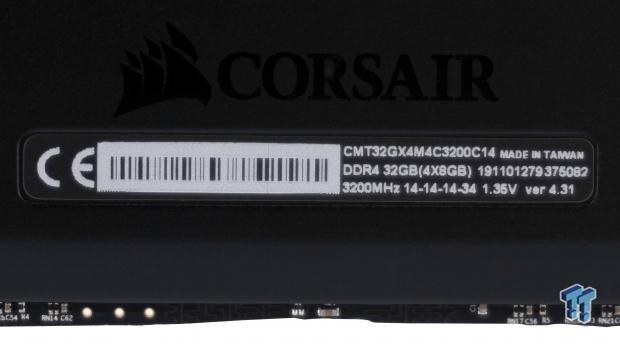 On the reverse, the aesthetic is the same, except for one small detail. Under the Corsair name is the product sticker, which displays the model number, density and serial number, and even the XMP 2.0 profile settings, as well as the version number. 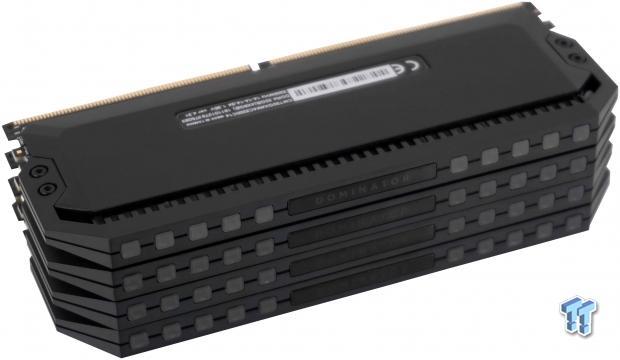 Across the top is a new look for Dominator RAM as well. Where there used to be rounded slots on either side, this time we see a total of ten squares for the CAPELLIX LEDs, and another two LEDs are under the Dominator name in the black plastic center part. It may not look that amazing now, but wait until the system is fired up. 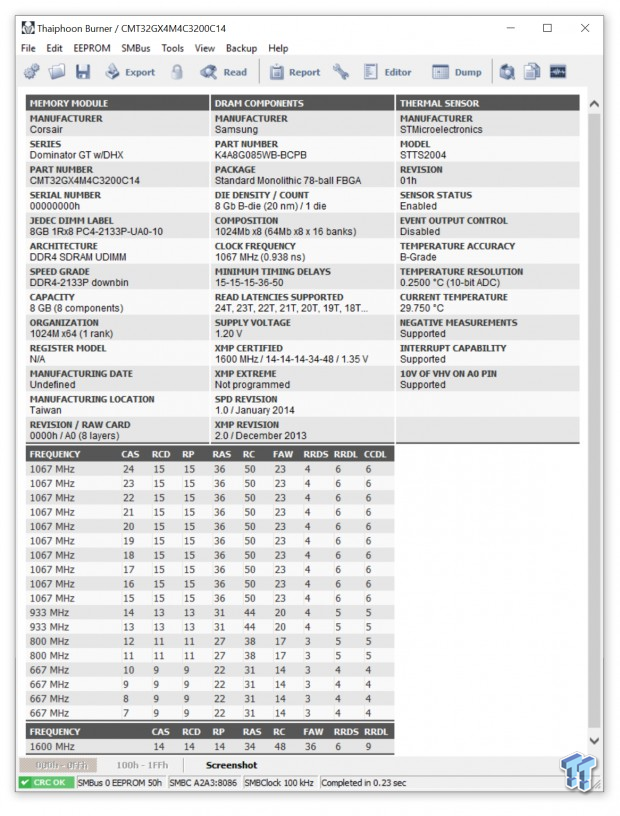 With the complicated nature of the removal of the heat spreaders, we opted out of that challenge and looked to Thaiphoon Burner for the IC specifications. What we see in the chart is that K4A8G085WB-BCPB Samsung ICs are used, and yes, they are B-die. An additional bonus is the thermal sensor, for those who want to take this kit to extreme overclocking levels, there is a built in way of monitoring temperatures. 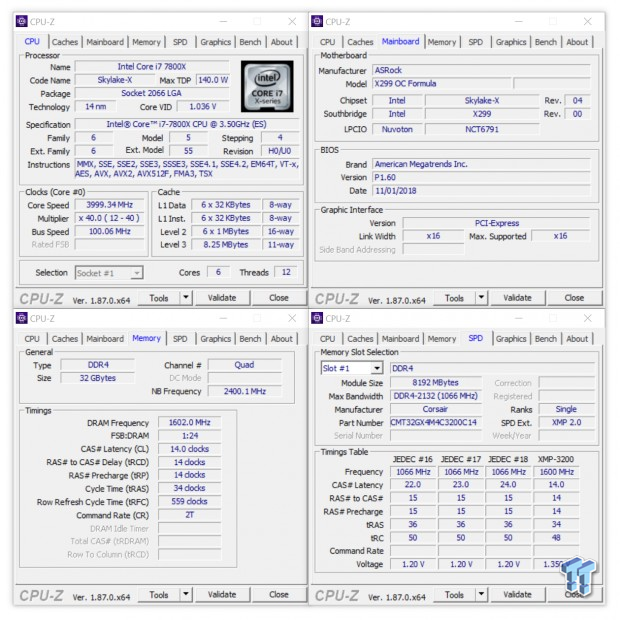 Using the 7800X to boot this kit in quad-channel, we went into the BIOS and set the XMP 2.0 profile to run, saved, exited, and went right to Windows for this screen capture. The Dominator Platinum RGB are indeed running at 3200MHz with 14-14-14-34 timings. Back to BIOS we went, and verified the 1.35V used for the VDIMM, and also saw the 1.20V VCCIO and 1.35V VCCSA. 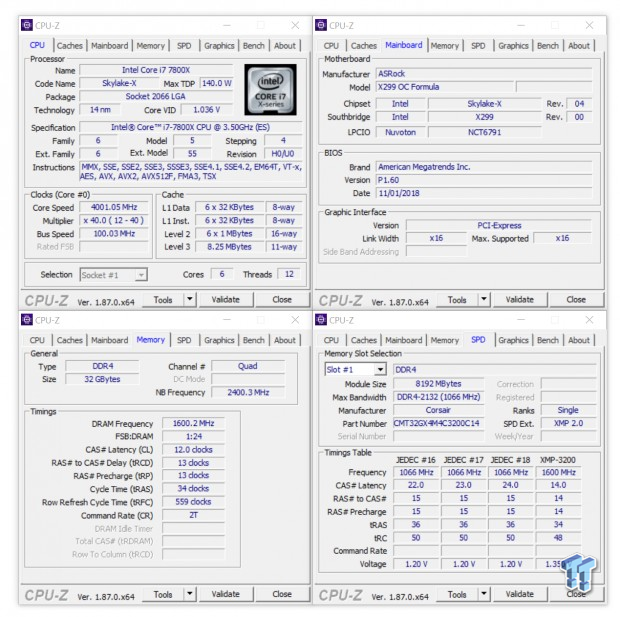 Still running at 3200MHz, we honestly did not expect much movement in the timings with four sticks in use. However, we were pleased to see that by bumping the three voltages with 0.10V, we were able to test this kit at 12-13-13-34 2T timings, and the kit is rock solid stable doing it. 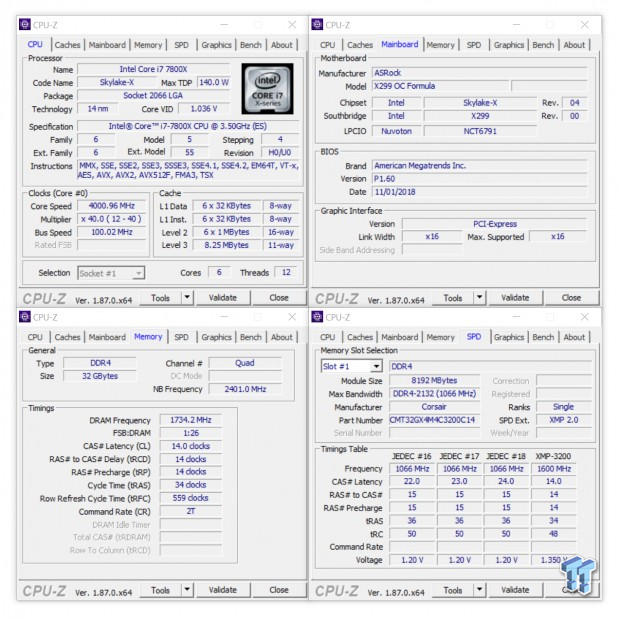 Suing the same voltage parameters as we do with the lowered timings test, we also try to achieve the most speed possible. Again, we were not expecting miracles here, and are pleased with the 266MHz increase with full stability. That being said, keep in mind, we are still using 14-14-14 timings right now, and we see no DDR4 on the market that has an XMP 2.0 profile of 3400 or 3466MHz with CAS 14 at the same time. 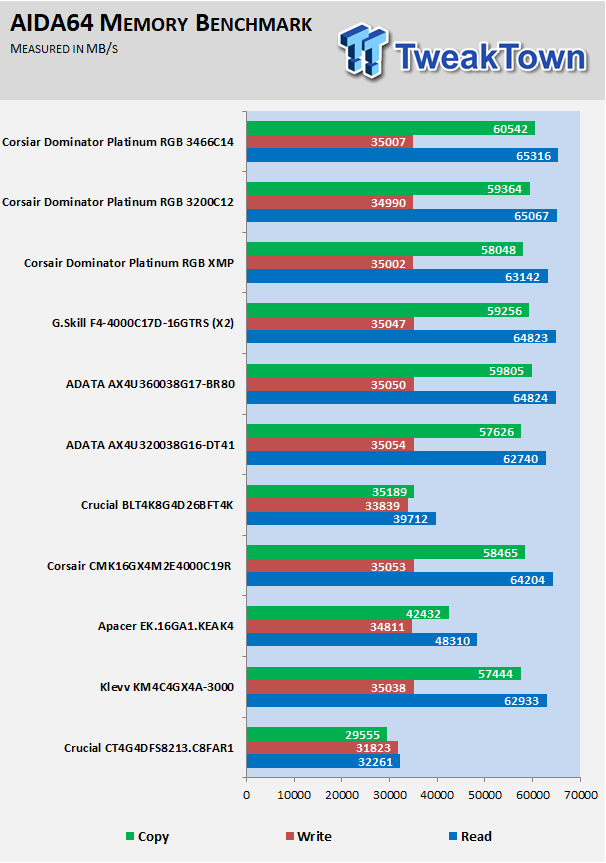 Using the XMP 2.0 profile to compare to the rest, we feel this Corsair kit does rather well considering most of the memory tested is faster and only slightly better, while other similar or slower kits are handily beat. Running with the lower timings has defined advantages and puts up some of the best results, and with the Dom Plats running faster, the read and copy speeds are the best in the chart. 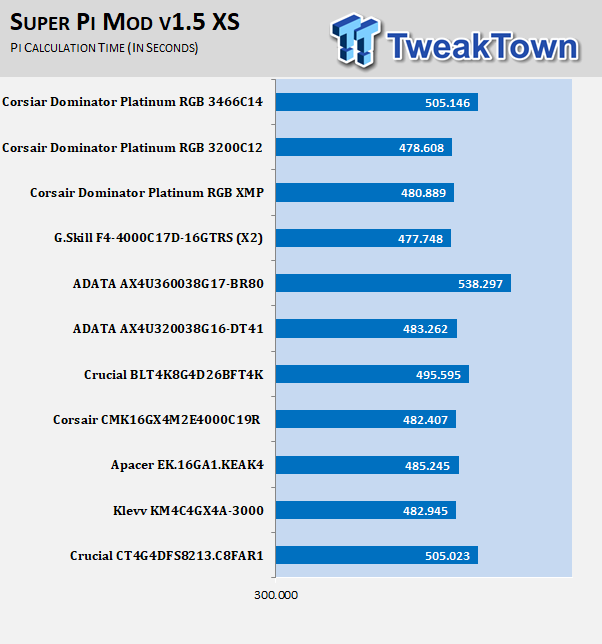 The Dominator Platinum RGB puts in the second-best score in the chart, and is only beat by a kit running 4000MHz. Opting for the lower timings will gain you just over two seconds of time back to your day when crunching numbers, but at top speed, things went backwards, in repeated testing, resulting in a comparison to the 2133MHz kit at the bottom of the chart. 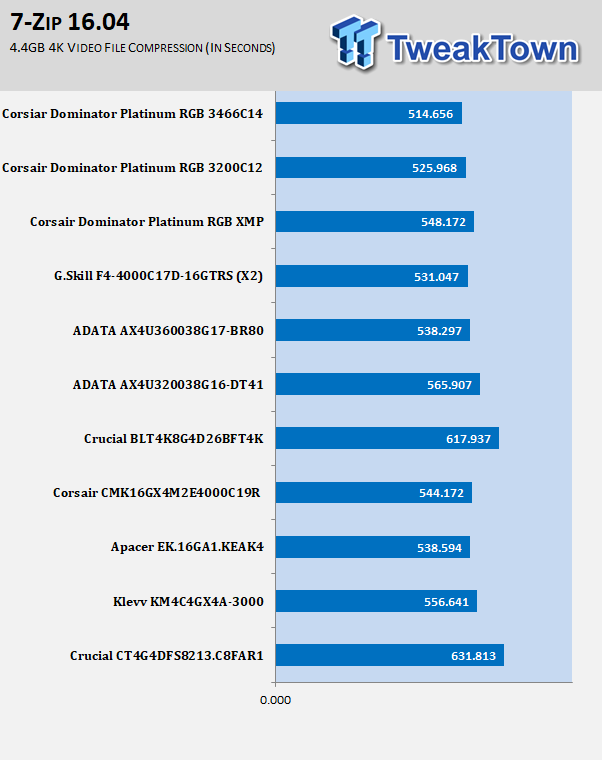 Fresh out of the box, when it comes to video compression, the XMP 2.0 profile settings lack that "power" we expected to see, resulting in a fifth-place finish overall. There is hope though, if you lower the timings or raise the speed, nothing else in the chart is comparable.

In the end, Corsair has impressed us with the Dominator Platinum RGB memory, and we still have yet to get to the RGB part. We have to agree that with the specifications of the kit we were sent, 3200MHz CAS14 kits doe tend to deliver quite a bit of bang for the buck, and throws a bunch of shade on kits that are faster.

Even though many would consider the overclocking headroom a bit tight, in reality, it is great. 3200MHz at CAS12 is impressive for air cooling the memory with the little bump in voltage that we used. We also enjoyed the free speed while still keeping the tight timings the XMP 2.0 profile offers. On top of that, the results in the charts speak for themselves, and if not at the top, the Dominator Platinum RGB placed better than expected except for that single run of SuperPi. As far as performance goes, the Corsair kit is tough to beat. 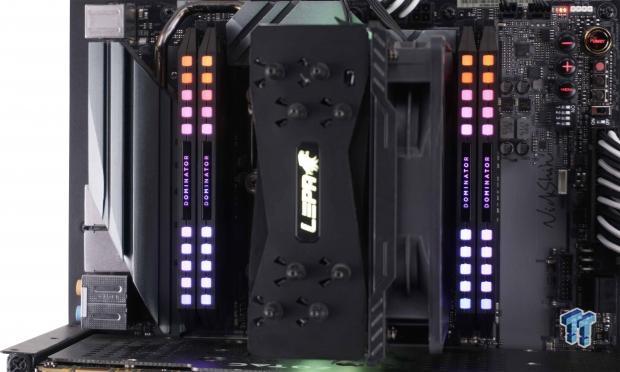 Beyond the main reason for memory, there is also aesthetics and lighting to consider as well. We like the smoothed over style of the black anodized aluminum heat spreaders, we like the look of the added fins across the top under the light bar, and the newly designed LED cover that we all see day to day is appreciated too.

By default, a rainbow of colors will shift from the top to the bottom of the sticks, but keep in mind, these are compatible with all of the motherboard RGB systems, so they can also match what is going on everywhere else in the system. If you want total control of the individually addressable RGBs, there is iCUE software for that, with various modes of display and the ability to address each LED to define the parameters as you see fit.

Corsair opted for the best ICs out there to populate the Dominator Platinum RGB memory, at least in the version 4.31 kits. The murdered out appeal is something that will fit within any build theme, and the fluidity of the way the lights change color is smooth and the LEDs are bright, much brighter than many other RGB DDR4 out there.

The only stumbling point is the price. The Dominator Platinum RGB memory we tested will set you back $519.99 at Newegg, which is less than the MSRP of $554.99 seen on the Corsair product page. On top of that, the G.Skill Royal RAM at the same speed, with the same timings, is $40 less at Newegg, it makes it a tough choice.

While we prefer the aesthetics of the Royal over the Dominator Platinum RGB, we can see where this kit will fit into more builds and will likely appeal to more customers. All of that being said, we would still use the Corsair Dominator Platinum RGB, as the performance is most important to us in memory, and Corsair was able to do very well in this department.

They are seriously expensive, but the Dominator Platinum RGB kit we have is a beast! The perfect match of speed, timings, and density to please most users. On top of that, they look great, and offer the most RGB LED controls of any DDR4 we have seen so far!