The 1TB Addlink S70 brings the fundimentals but falls short of being impressive. You just want the basic for gaming this is an option, but there are so many others available too.
Buy at Amazon

Addlink, a Taiwanese manufacturer of flash-based products, has received positive praise for its products on Amazon in the US. The company has a span of SATA and M.2 NVMe drives available with strong pricing and performance specifications. 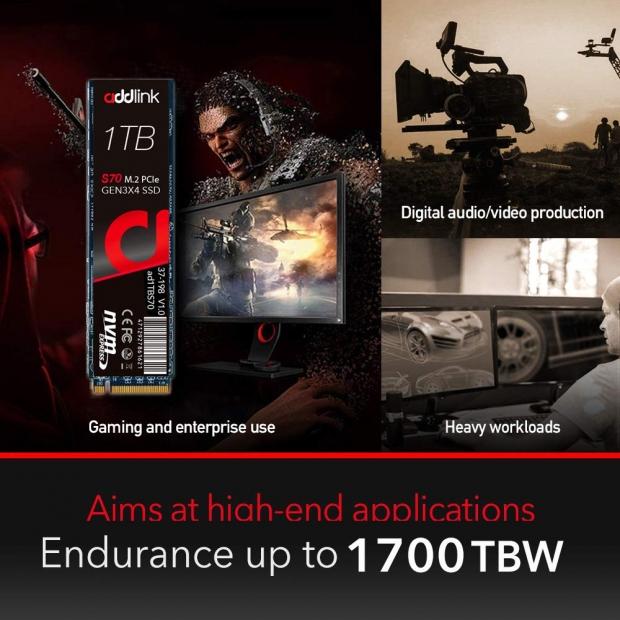 Technically, the company name is addlink with a small 'a'. My grammar, and word processor, won't let that pass. The company goes the extra mile to make the small "a" in the marketing material. The 'a' is red, and the rest of the letters are white. With that out of the way, we can get into the substance of this review.

The addlink S70 is a high-performance NVMe SSD using the Phison PS5012-E12 controller. We've tested this controller previously with the MyDigitalSSD BPX Pro and Crucial Force MP510. Both products also paired the controller with Toshiba 64L 3-bit per cell flash, just like the S70.

The addlink S70 differs from the other two E12 drives we've tested. This model doesn't reserve data capacity; a practice formally called overprovisioning. The S70 gives users the full capacity of the flash. Most E12-based SSDs shipping today use overprovisioning, so a 1TB model that has 1024GB of space actually gives users 960GB. If you are a gamer, the extra space is welcome given the size of modern games today.

Addlink advertises this model for more than just gaming though. Digital audio/video production and "heavy workloads" actually benefit from overprovisioned space by reserving cells for background use. The reserve space allows the drive to keep some clean cells so writes can complete faster. We haven't tested the E12 before without overprovisioning so this is a good opportunity to see how the controller reacts to heavy workloads in this configuration. 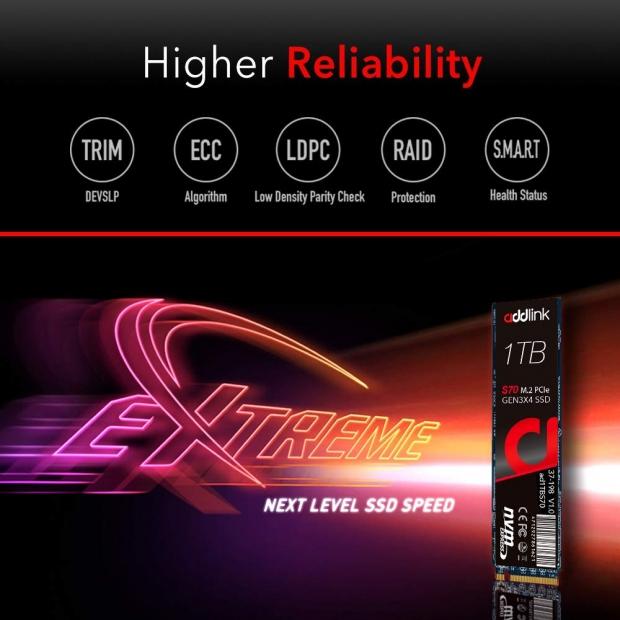 We've covered the Phison E12 several times over the last two years and detailed the technology built into the controller. The E12 is Phison's most advanced controller currently shipping.

S70 pricing starts out as low as $47.85 for the 256GB drive. It's amazing how low NVMe pricing is right now with ample flash available to allow companies to compete for your dollar. The 512GB drive is only $88.44. The 1TB drive we're testing today is a much higher leap. It costs $184.88 but there is an even larger jump to $429.99 for the S70 2TB drive. The pricing shows how demand for higher capacity drives, and thus more demand on denser flash packages, has kept those sizes much higher in cost per byte than smaller capacity models.

Addlink back the S70 series with a strong 5-year warranty. This series gets an equally impressive endurance rating that ranges from 2,000 TBW to 400 TBW. 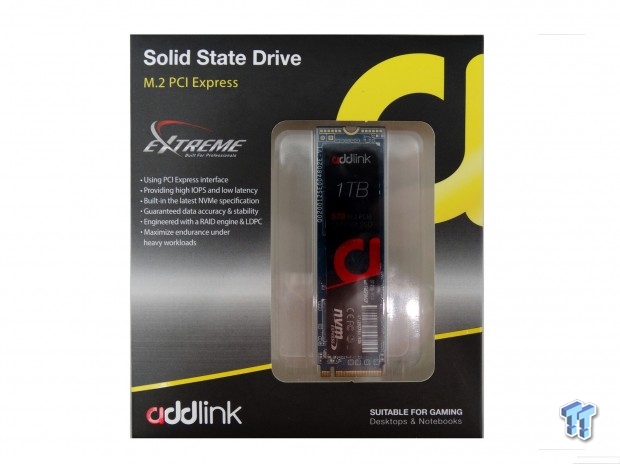 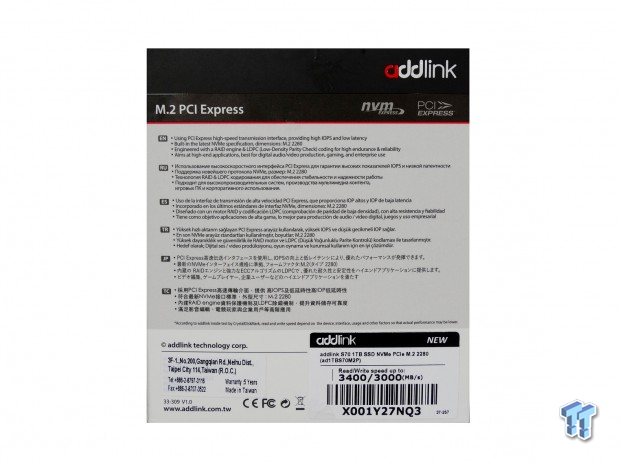 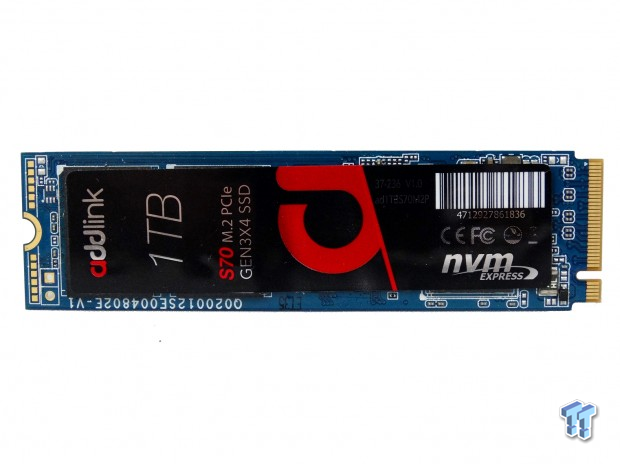 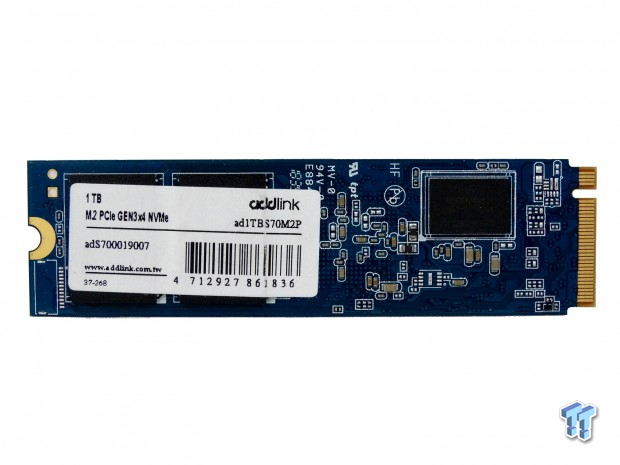 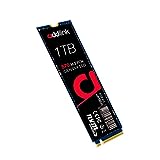 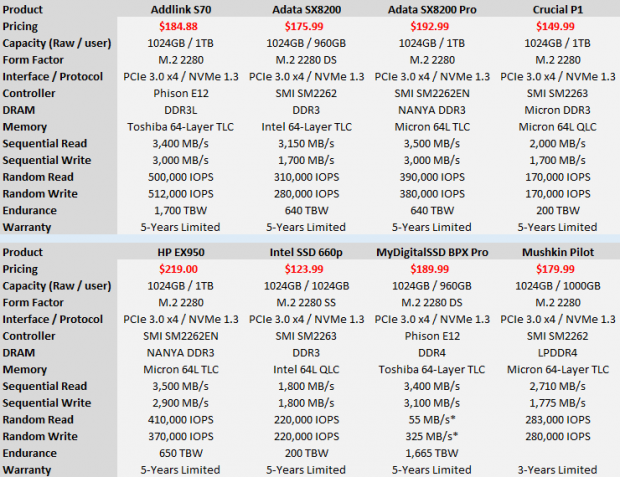 We searched Amazon to find products priced close the new 1TB Addlink S70. You will find the $243 Samsung 970 EVO Plus (and original 970 EVO) off the list.

You will find seven mainstream and premium consumer SSDs with varying flash and controller technologies.

The MyDigitalSSD BPX Pro is a near twin to the addlink S70's hardware. The specifications are slightly different, but the core controller and flash are the same.

The rest of the products come with Silicon Motion, Inc. controllers. There is a mix of SM2262, newer SM2262EN, a lower-cost 4-channel model in the Intel SSD 660p and Crucial P1, both paired with 4-bit per cell memory. 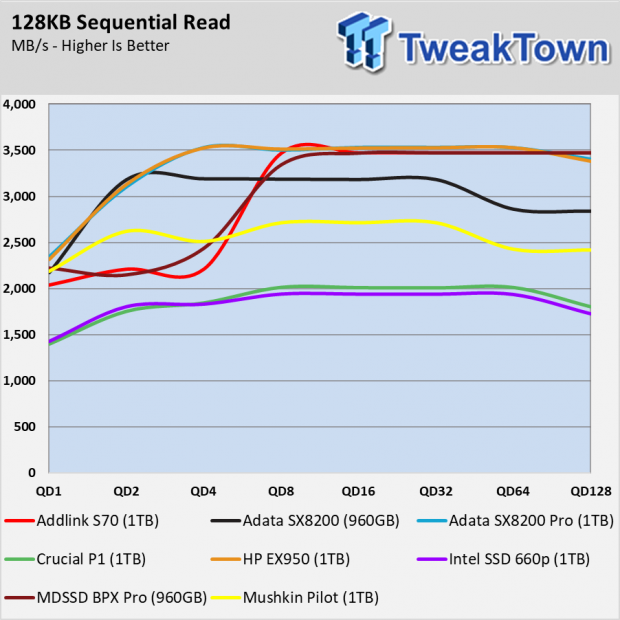 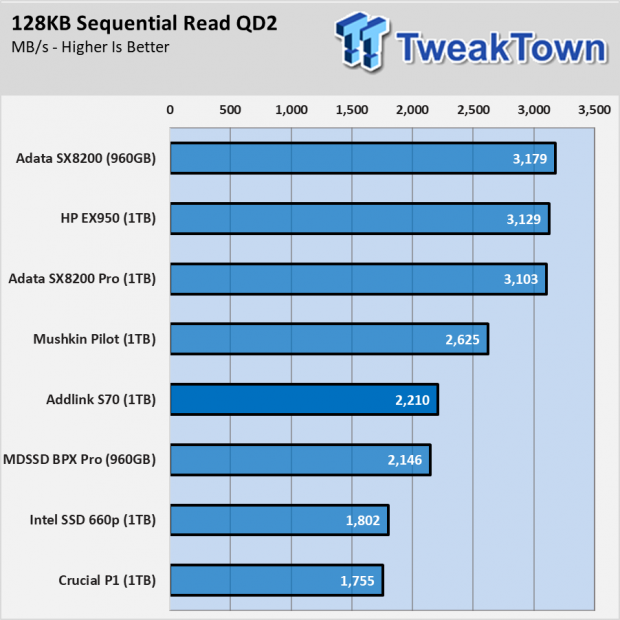 The Phison E12 controllers don't like our test software for measuring sequential read performance. This has been an issue with the controller since we first started testing it prior to the official release. The low queue depth numbers are false. We generally ignore this test with this controller and use the mixed workload test to evaluate sequential performance. 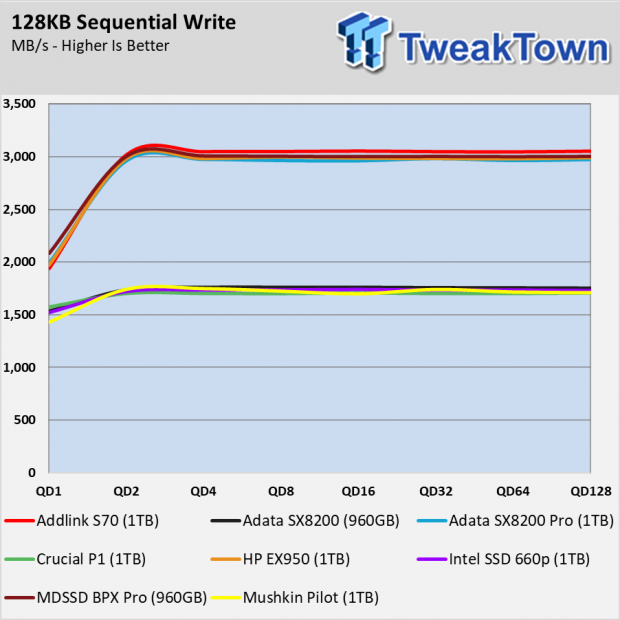 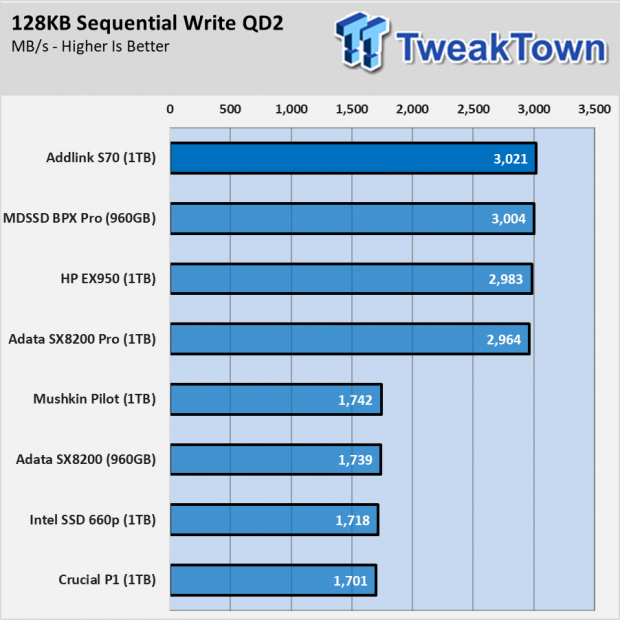 We often talk about the divisions between SSD product classes. The chart above shows exactly what you pay more for, or in other terms, what you can get when you open the wallet a little more.

The addlink S70 joins the premium performance class in the sequential write burst test. At queue depth (QD) 2, the S70 outperforms the other drives. 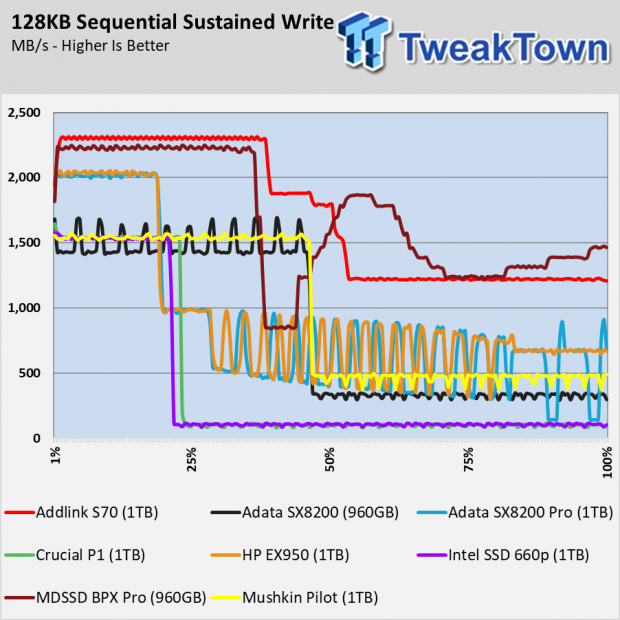 The slight performance lead writing sequential data carries over to the sustained write test. The S70 has exceptional SLC mode writes with a generous size, then the performance drops off at a predictable rate for 3-bit per cell flash. 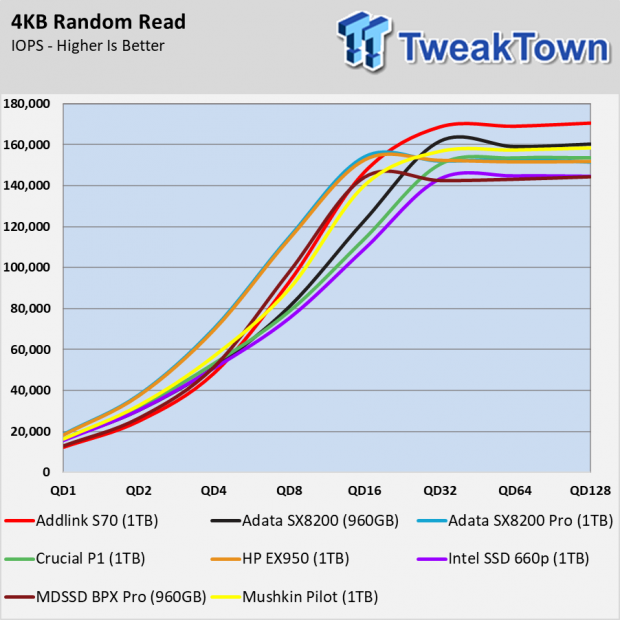 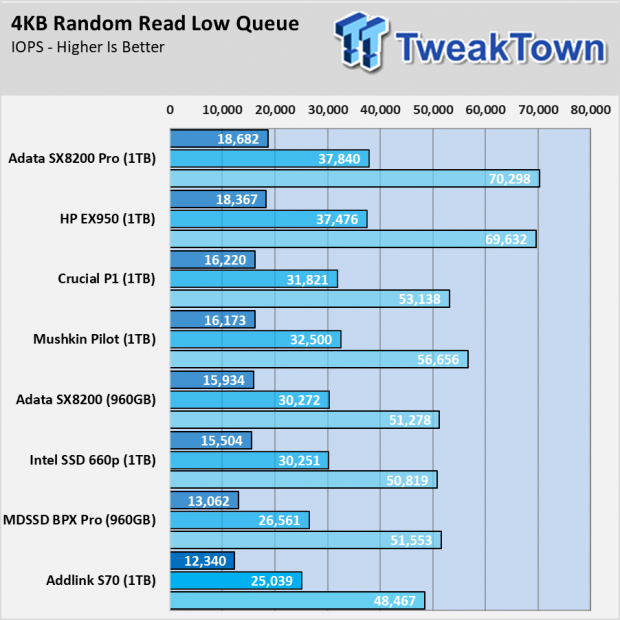 The 1TB Addlink S70 didn't fair well in the random read test at low queue depths. The drive uses Toshiba 64L TLC flash, so it's at a disadvantage to the drives using Micron's 64L TLC. The QD1 read with just over 12,000 IOPS is still a strong score that will increase desktop application performance for those moving from a SATA SSD. 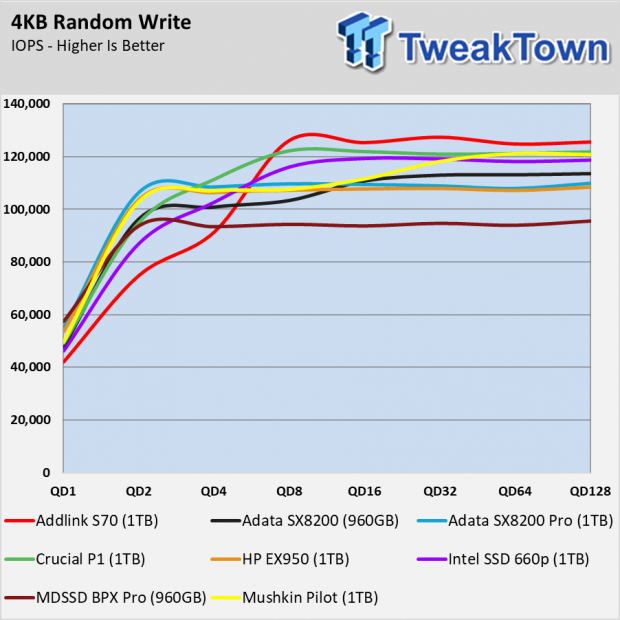 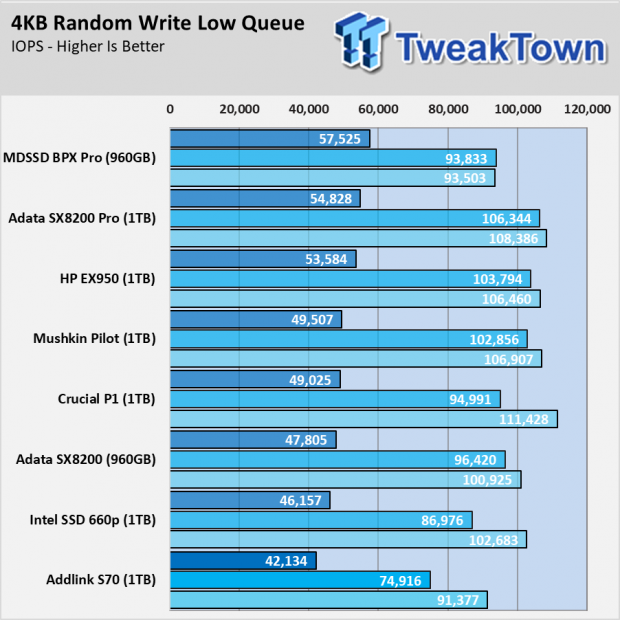 We were surprised to find the S70 at the bottom of the random write chart while the MyDigitalSSD BPX Pro sat at the top. The drives are nearly the same, but there are a few key differences. The S70 doesn't overprovision the memory, and that can decrease performance later in the drive's life.

This is the first time we've been able to compare the overprovisioned Phison E12 against another E12 without the extra reservation of memory. 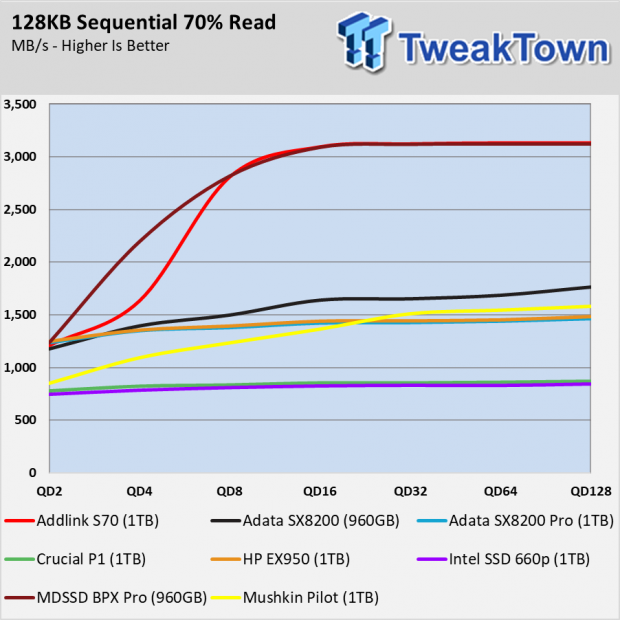 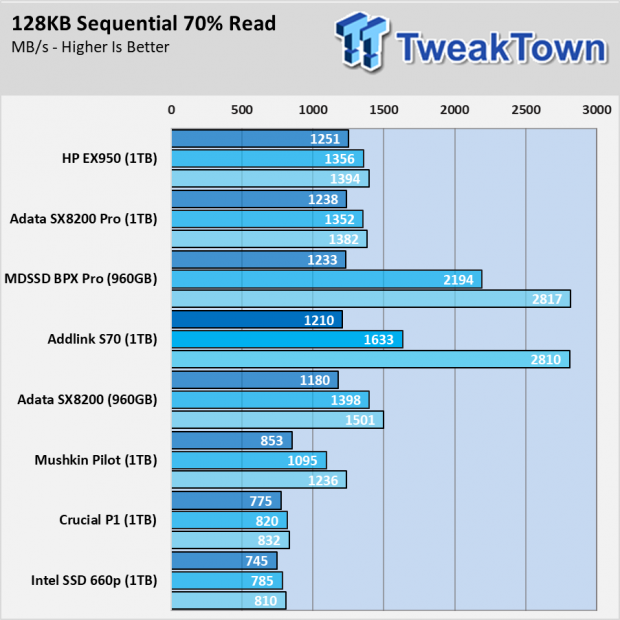 The Phison E12 is a very powerful controller with a processor and co-processor that allows the drives using the technology to performance complicated IO tasks quickly. We will see this carry over to the more stressful tests on the next page where we look at application performance. 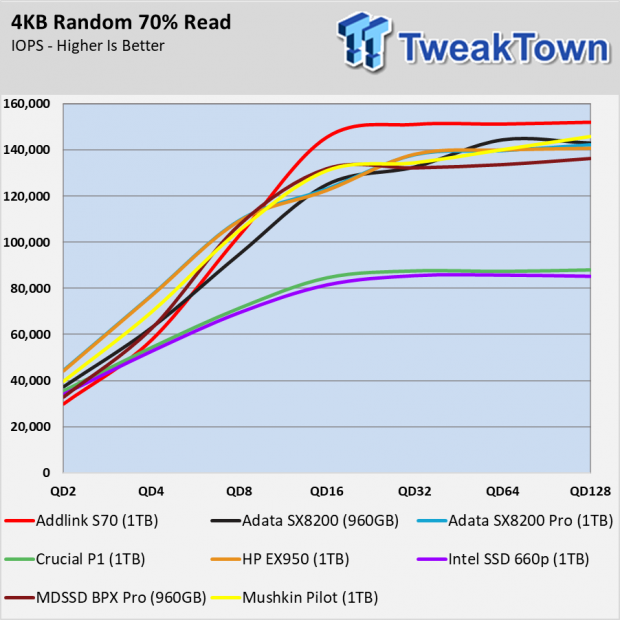 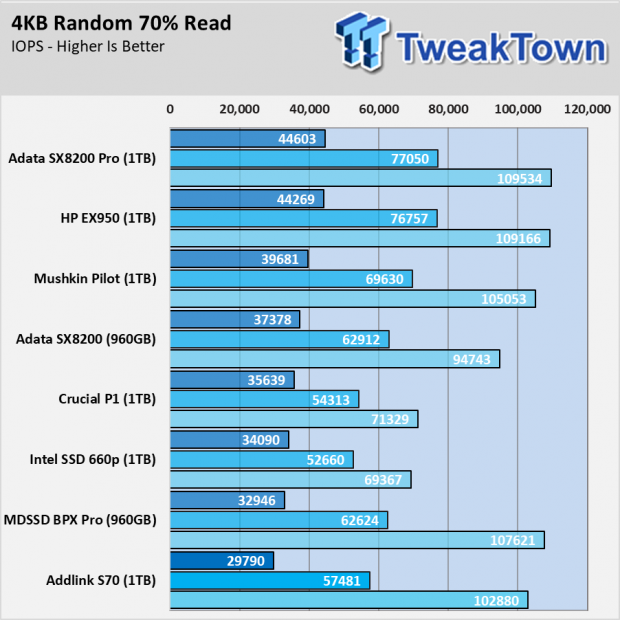 The 1TB addlink S70 reaches a very high peak performance in a mixed random workload. The performance is a little underwhelming at lower queue depths, but it takes off at QD16 and above. 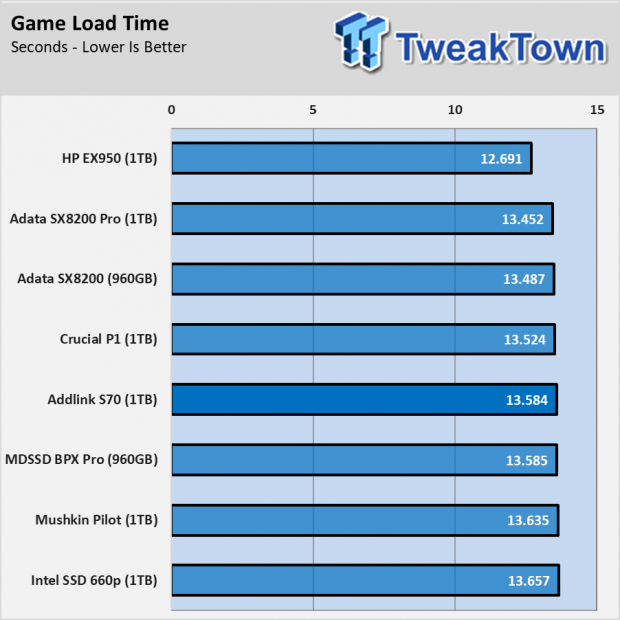 All of the drives in the game load-time test using Final Fantasy: Stormblood score within a second of each other. This is common with high-performance SSDs in this price range. The workload isn't all that difficult, so we're not stressing the drives. 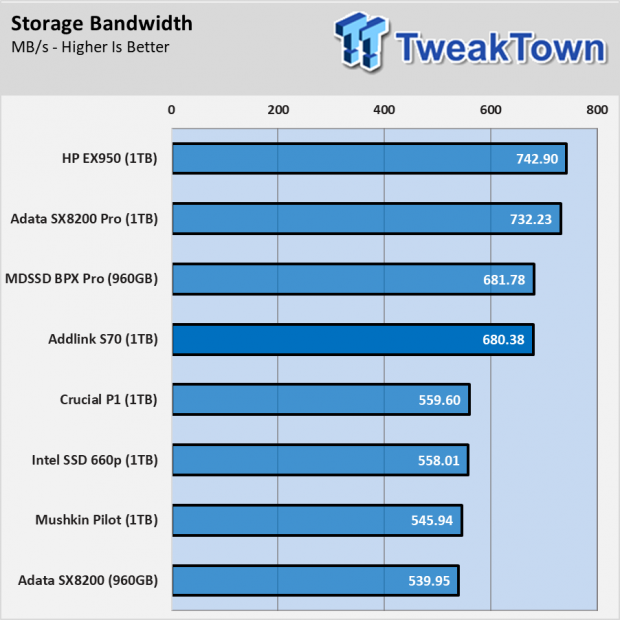 Even though we spotted some differences between the BPX Pro and the addlink S70 with synthetic workloads, the two drives performance nearly the same with a wide range of applications as the measuring stick. 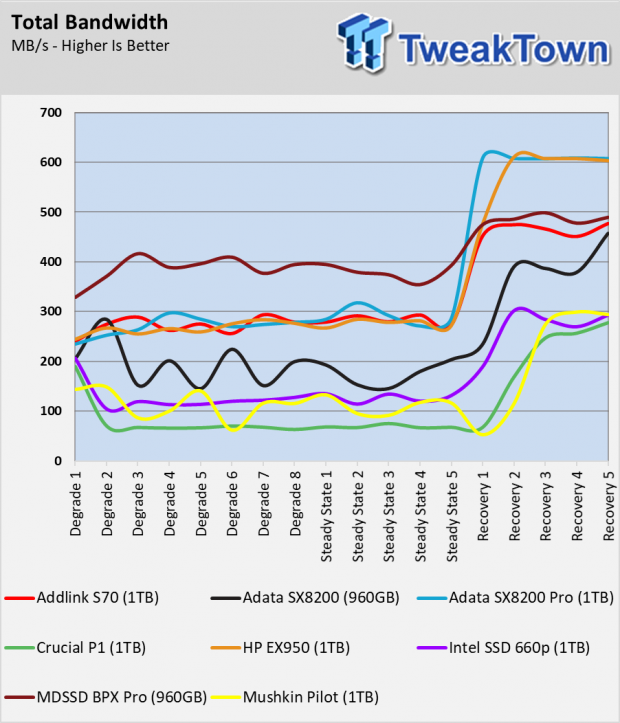 The addlink S70 lacks the same high performance we observed under heavy workloads with the MyDigitalSSD BPX Pro. This comes down to the overprovisioning space reserved by the BPX Pro. The practice of holding some cells back from the user started with the idea of increasing performance and endurance. 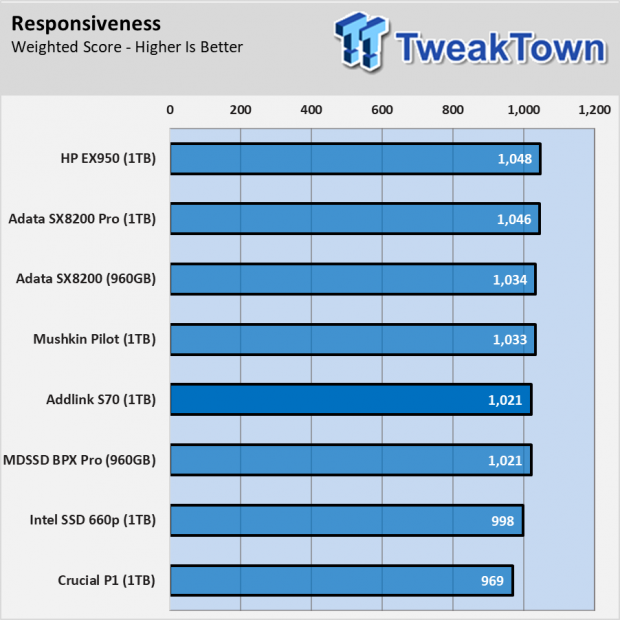 The Responsiveness Test comes from BAPCo's SYSmark 2014 SE suite. The software runs a number of office-focused applications. The base score of 1,000 comes from an OEM version of the Samsung 850 EVO.

Most of the drives deliver a more responsive user experience than the 850 EVO including the addlink S70. 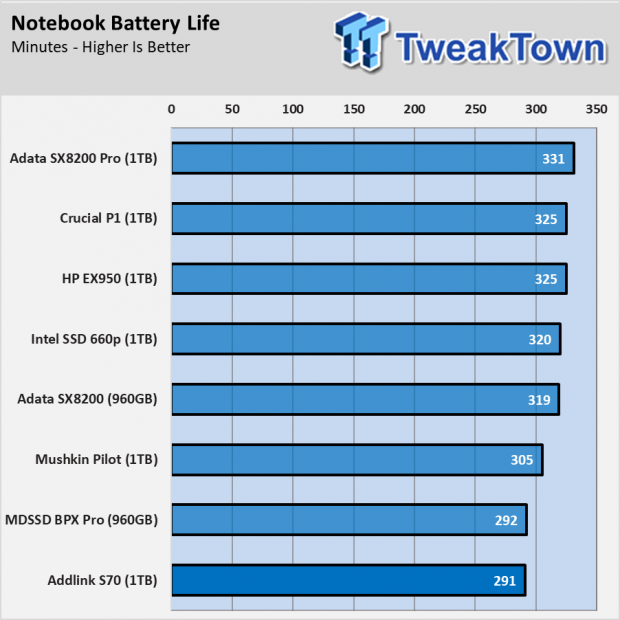 Power consumption has historically been a weak point for Phison-based SSDs. This is also true for the Addlink S70. The drive delivers nearly 5 hours in our Lenovo Y700-17 gaming notebook. It's a decent score, but far from the best that we've measured with an NVMe SSD.

This is the first Phison E12 we've tested with full user access to the flash. For gamers, this is a welcome configuration. You can install more applications, including games, and it lowers the cost per usable byte. For power users, having dedicated capacity in reserve is a blessing. Heavy write workloads like the clean cells just waiting for incoming data. The marketing materials show the addlink S70 can do both, but this drive is clearly setup for one workload. 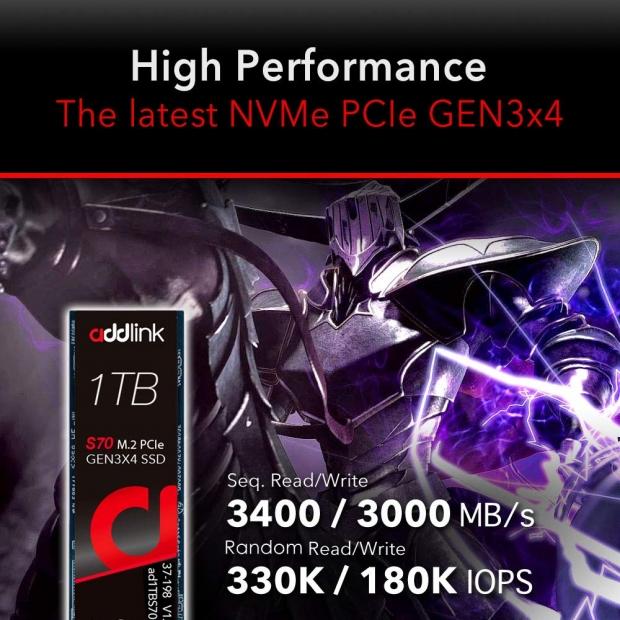 For gamers, the addlink S70 is a strong SSD. It really doesn't take a lot to load game levels. A drive needs good read performance, a lot of capacity, and a low price given the average age of the target market. The 1TB S70 we tested today checks all of those boxes. The performance is above average for this category. The price is in the middle, and that's a good place for an established brand with an SSD optimized for a target market.

Addlink is not an established brand in the US, so we feel there should have been more to make this a stronger release. Don't get me wrong; the fundaments are there, this is complete consumer SSD, but it could use something to sweeten the deal to entice users to spend their month on the S70.

The 1TB Addlink S70 brings the fundimentals but falls short of being impressive. You just want the basic for gaming this is an option, but there are so many others available too.