Currently, we are looking at the inbound side of the Ninja 5. Starting at the bottom, we can see the six heat pipes as they angle outward to align with the holes in the fins. There are forty fins in the stack, and not all gaps are even along the edges, but there is a defined section of them missing in the middle. The top fin is black while the rest are aluminum, and the bottom six are cut shorter to allow for memory clearance. Looking now at what would be the top edge of the cooler when installed, we get a better look at a few things. We see that the pipes are spread across the fins and that there is a similar gap in the middle of the stack. The notches for RAM clearance is easy to see at the bottom of the fins, and we can also see the crazy bends needed for the pipes to get through the cooler. Also note, the crossbar is already mounted to the base of the cooler. At the back of the Ninja 5, we changed the angle to get a better look at the fin stack shape. Both the front and the back are identical in shape and are longest near the edges of the cooler. After the small tabs, the fan rests against the next level of indentation. The bulk of the fin stack is even sorter, which allows a fair bit of room for the airflow to build pressure before entering the tower. We did the same for the last side of the cooler. One point is that the gap is more clearly defined from this angle, which all sides have, resulting in a tower with four defines sections, all tied together at the center only. We also see the notches near the edges of the fins, which are there to allow the wire fan clips to lock into the fin stack. Once we see the Ninja 5 from the top, this four-part stack is more visible. All of the sections are tied together in the center and is also where the curved throwing star is embossed into the top aluminum fin, and we even see textured edges of the star to add a bit of contrast. The heat pipes are perceived to be equally spaced in the four sections, which should make for good heat transfer and being offset, airflow can get to all of them as well.

Even though we have addressed the pipes and bends needed to make this design work, we still wanted to show off the base of the Ninja 5. We can also see how the crossbar locks into a groove in the aluminum pre-cooler, as well as the contrast of nickel plating of the copper base plate to the aluminum above it. As most are, the base of the Ninja 5 is slightly convex, or higher in the middle than it is near the edges. The base is highly reflective, not quite mirror finished, but is why we had to use the light and the angle to show off the circular machine marks left on the base. 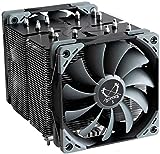