With large bay platforms like the 8D, you are choosing based on hardware, platform and ecosystem. Drobo has all three.

Over the years I have had a number of Drobo platforms in the lab for testing, all the way back to the 5D in 2013. With the brand going through several transitions since then it's great to see they have continued forward, launching their latest model; the 8D

The 8D builds upon the success and popularity of the 5D and 5Dt platforms, offering increased capacity through the addition of three drive bays. BeyondRAID maintains as the platforms major selling feature and platform, offering consumers the ability to migrate with ease as their data needs grow. With the 8D, we find an extra drive slot on the back of the unit, ready for SSD caching accelerating the performance of hot data.

A new feature to the Drobo platform with the 8D is Intelligent Volume Management, allowing users to create up to 16 volumes with a maximum 256TB storage pool. Thunderbolt 3 has been chosen for its superior performance with the 8D offering two-ports and six devices through daisy chain.

Compatibility includes macOS 10.12 and later. MSRP comes in at $1299 with a two-year warranty. 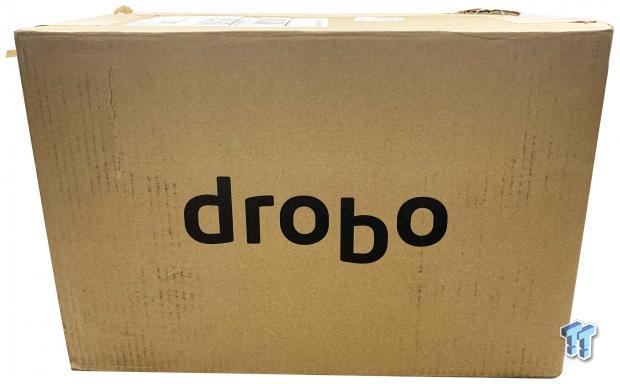 Packaging is quite simple, brown box with branding. 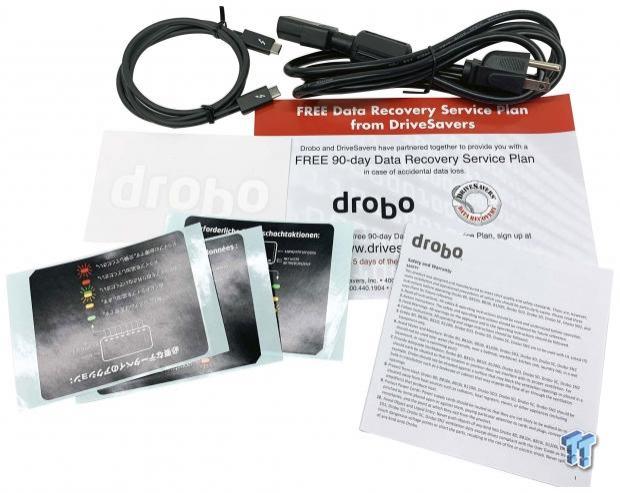 Included with the 8D, we have the power cable, Thunderbolt cable, and stickers for the bay cover.

The front of the 8D offers that iconic Drobo design. LEDs are off to the right side, branding at the top. 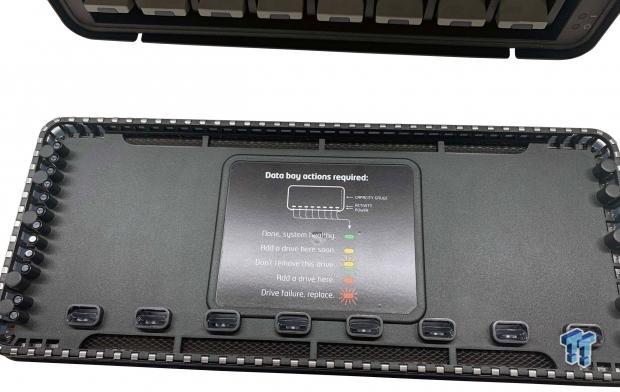 Inside the front cover, we have a sticker with the LED color legend. 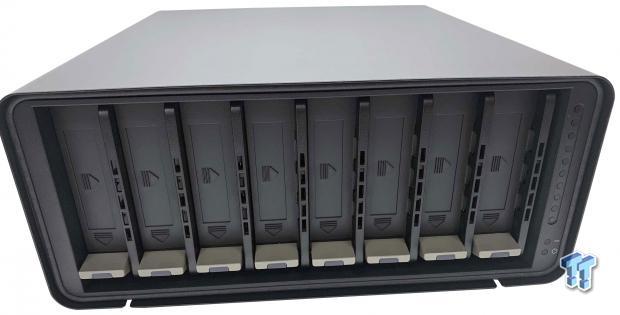 With the cover removed we have all eight bays lined up, you can now see the LEDs to the right, and each bay has one below it as well.

On the backside, things stay simple with power input to the left and button to the far right. In the center, we have the 2.5" SSD slot, dual cooling fans, and Thunderbolt 3 ports. 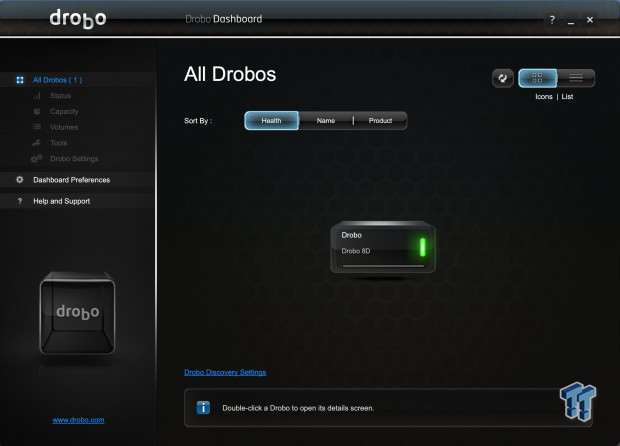 The interface hasn't changed too much over the years, once your unit is detected it will show up in the center and to the left, we can navigate settings. 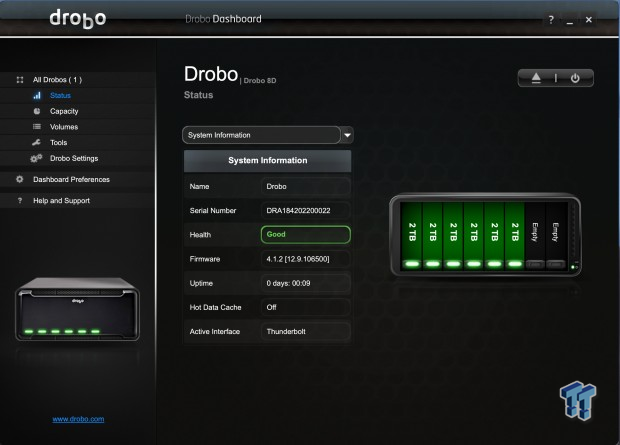 Navigating that side panel, we have the status of the 8D. We have six Toshiba drives installed for testing along with a 256GB SSD for testing cache. 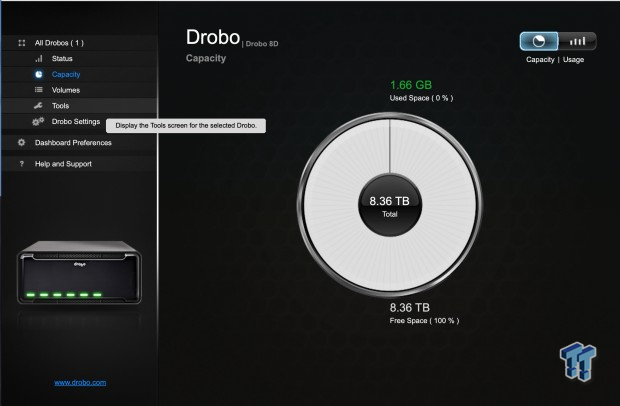 Moving through, you can see we have 8.3TB of space free in the pie diagram above. 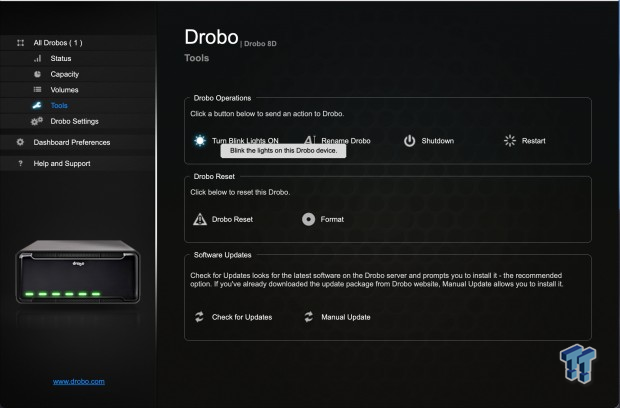 In the tools menu, you can rename, shutdown or restart the unit. Down below we can reset it or format the drives along with flipping the unit into dual redundancy mode.

With this unit being a macOS only platform for compatibility, I used DST from Black Magic Design to get a feel for the performance cached and uncached, single and dual redundancy with my 2017 iMac 4K. 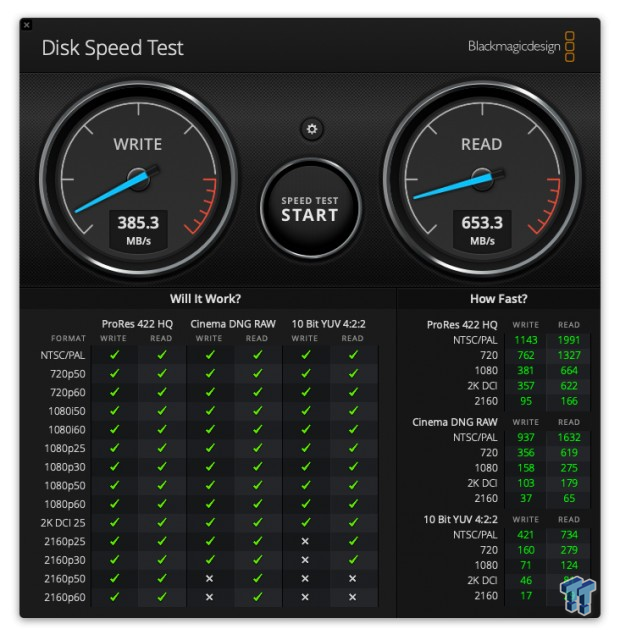 I started with single disk redundancy uncached. As seen above with our six drive the unit reached 653 MB/s read, and 385 MB/s write. 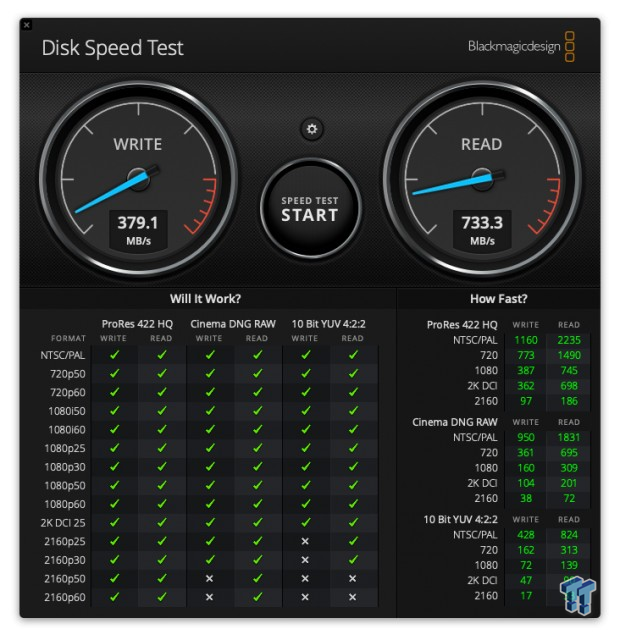 Adding in SSD caching to the single disk redundancy we have an increase to 733 MB/s read with similar write performance at 379 MB/s. 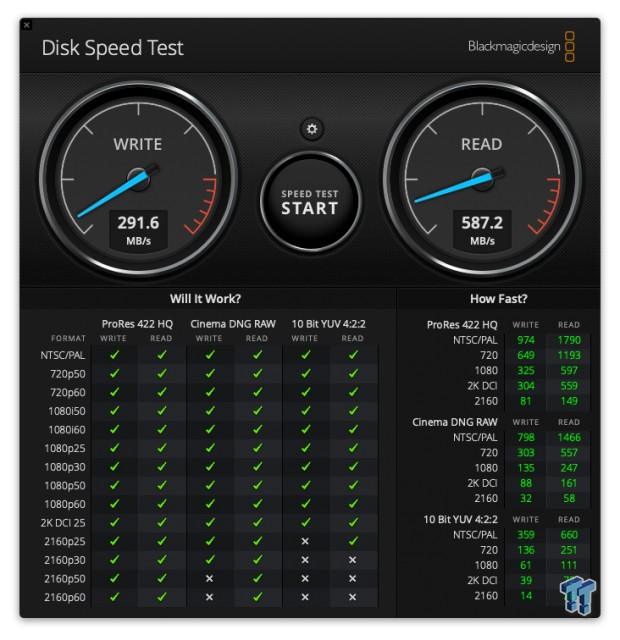 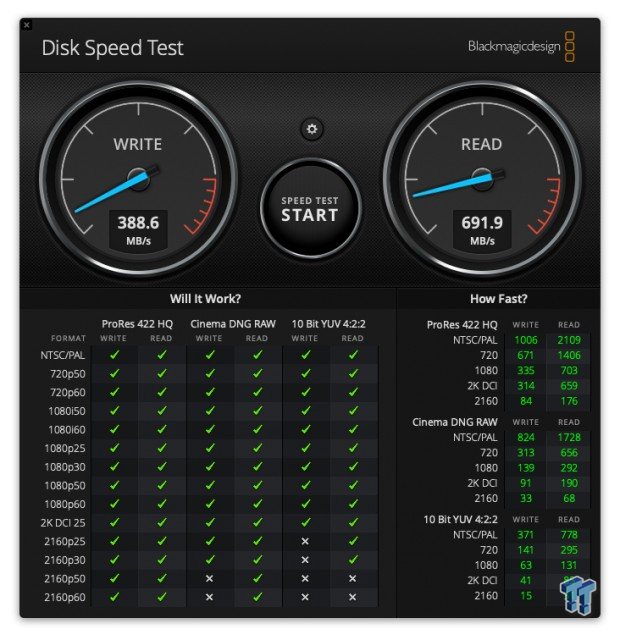 Drobo has been bounced around quite a bit over the last five years, but one thing has seemingly remained the same, quality, something the new 8D can be proud of. With this new platform, we have a mix of a metal chassis and plastic bits on the ends. The front drive panel is magnetically attached and allows those that want a refined aesthetic to run with it and those that want something more industrial to leave it in the box.

With only six of the 8 bays populated we did sacrifice some performance but were able to reach 650 MB/s single disk and 580 MB/s dual redundancy. Adding in the cache, we gained roughly 100 MB/s in each scenario. That said if we were to populate the unit fully, we would likely gain another 100-150 MB/s.

The dashboard for Drobo has never been cleaner, in fact, keeping with the same platform for so many years and across so many platforms only makes it easier for consumers to integrate with your portfolio as their data needs grow. Even with the minor changes, like the addition of intelligent volume management and caching the app stays quick and snappy through the menus and easy to navigate and get things done.

The Bottom Line: With large bay platforms like the 8D, you are choosing based on hardware, platform and ecosystem. Drobo has all three.