A while back ADATA sent us a kit of memory, and to clear the air, before we continue, there is a bit of a backstory you must understand. After receiving the kit, going through all the steps to bring forth the review, an email was sent to us, asking that we not go forward with our findings yet. The basis of this request had to do with marketing, where some at ADATA wanted to ensure that the market was fully aware of what is going on here. That notion is that while there is a tube of 3M Novec 7500 fluid at the top of the memory heat spreaders, that in fact, it does nothing actually to cool the kit, but was done more for aesthetic reasons.

In this instance, we are looking at a 32GB kit of "Jellyfish Project" Spectrix D80, which has gained a lot of hype since images and videos of the RAM has gone live on the internet. These kits are available in single 8GB stick densities on up for four 8GB sticks, and even comes in 16GB density sticks as well. Speeds range from 3000MHz on the low-end, currently topping out at 4133MHz, with plans to go as high as 5000MHz by the end of Q1 in 2019 when motherboard BIOS options for such speed are available. The lowest latency option at this time is CAS16 and tops out with CAS19 on the higher speed sets, they come with the choice of red or black heat spreaders, and require a range of 1.35V to 1.40V set in the XMP profiles for functionality.

Getting to the specific kit we have on hand today; we are looking at the AX4U360038G17-BR80. Decrypting that model number, this is a 3600MHz kit with 17-18-18-38 2T timings, and the BR80 at the end denotes the red heat spreaders, along with it being the D80 memory. Our kit is comprised of four 8GB sticks for a total of 36GB, which requires 1.35VDIMM for proper operation, and is backed with a lifetime warranty. Not only that, but the Spectrix D80 we have on hand is also built with Samsung ICs, which we hope will help overshadow the fact that the visual addition to this kit is just that, with plenty of overclocking potential. 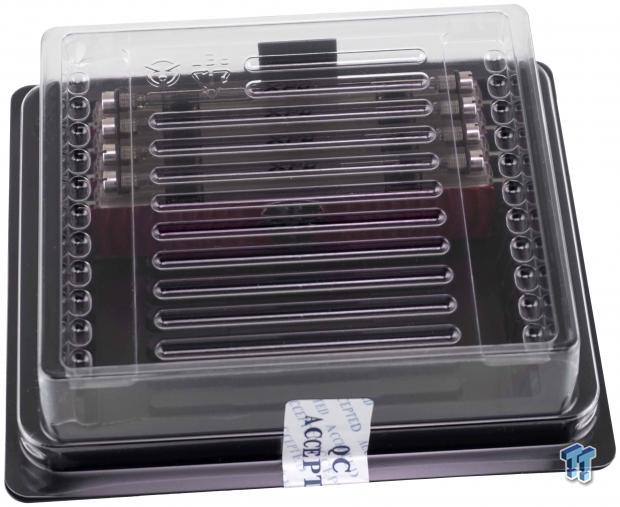 The memory we had been sent arrived so early that ADATA had not yet worked out the retail packaging. In a nondescript brown cardboard box, we found that our kit of XPG Spectrix D80 had shown up in an anti-staticESD memory tray with a transparent cover, which had been taped on either side to ensure the lid stays on as well as making sure nobody tampered with the kit once it left the hands of ADATA. 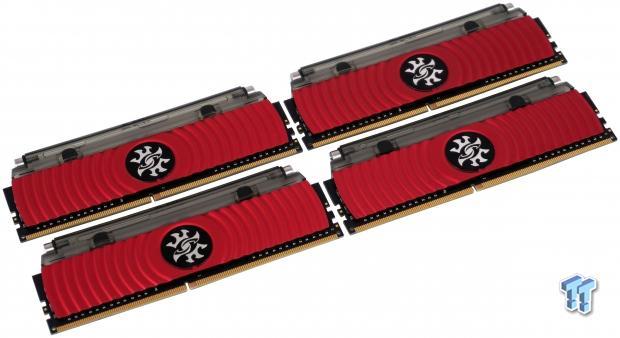 Out of the package, we can see the Spectrix D80 in full view. Starting with black PCBs, XPG then covers our kit with red heat spreaders with concentric curves emanating from the new logo in the center. The top of each stick has a tinted plastic section containing the fluid, there the RGB lighting passes through, and we can see that both ends of the tube have polished caps that seal the Novec inside of it. 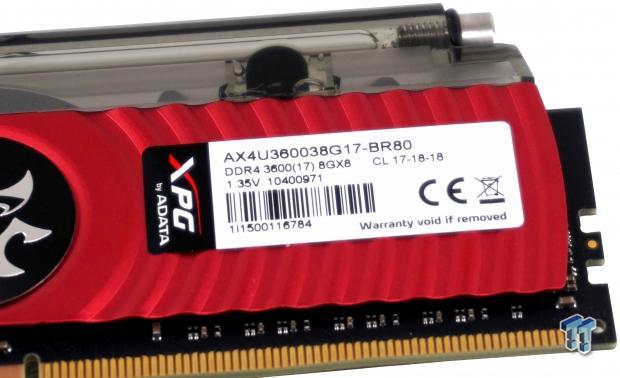 The product sticker on the back side of each stick looks like what we see here. The part number, speed, timings, and voltage are all displayed, along with the serial number under the barcode. We also want to point out the black metal tab at the top, which is how the heat is to transfer to the Novec, but note the tab is surrounded with plastic and does not make direct contact with the fluid. 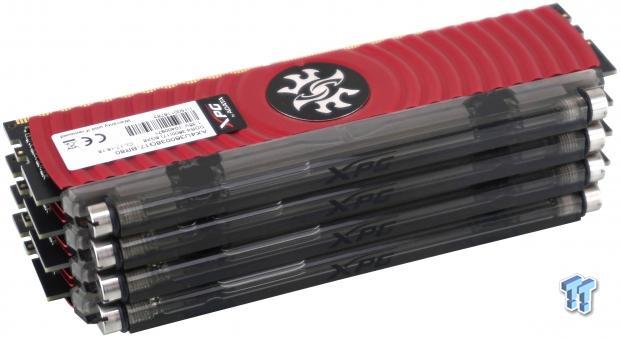 Examining the top of all of the sticks, with just hints of the red heat spreaders poking out between them, the view of the tinted plastic, which has the XPG name painted on them. The majority of users will be looking at the darkened plastic illuminated with RGB lighting, offset by the brightly polished screws on either end of each module. 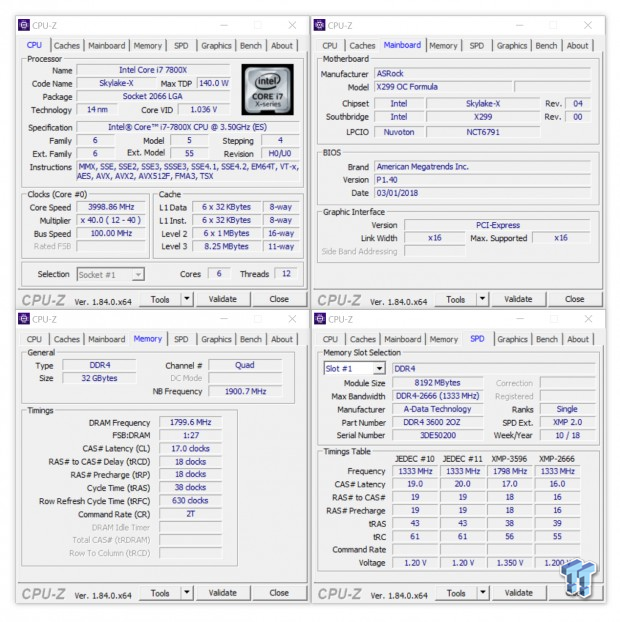 Our first trip into the BIOS has us enabling the first of two XMP profiles. XMP1 is what you will use to allow the full potential of the Spectrix D80 memory, as XPG intended it. As of now, the RAM is running at its rated 3600MHz with the same timings the sticker, and the web page tells us we should be running at. 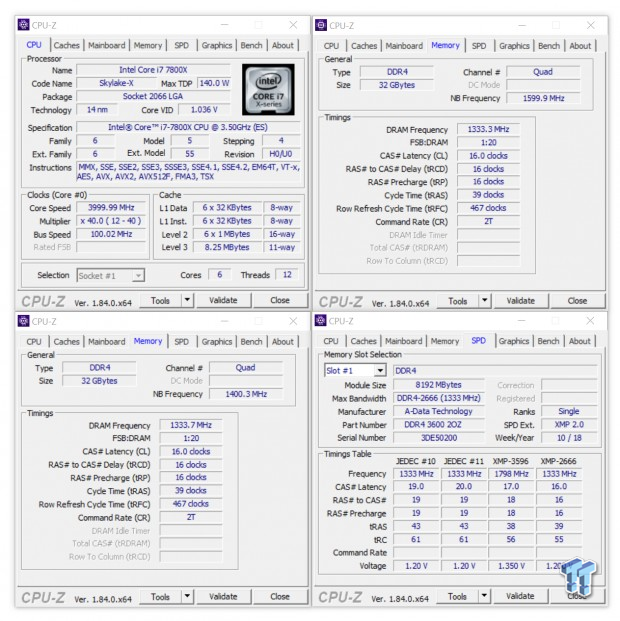 XMP2 is offered for those who either cannot hit the rated speed with the IMC, those wanting to use less power. Once employed, the XMP2 profile has the Spectrix D80s at 2666MHz, and the timings are lower, at 16-16-16-39 2T with only 1.20VDIMM needed. 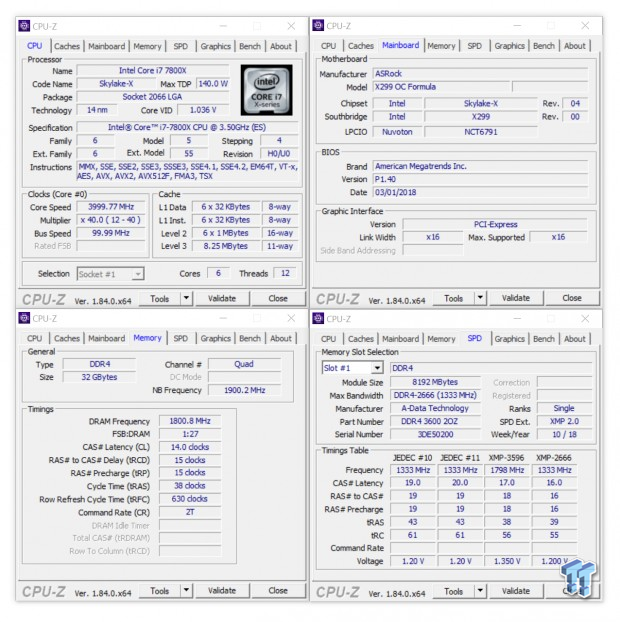 As we do, what you see here is the use of the XMP1 profile, as we lower the timings as far as we can, while still keeping the stability. VDIMM was increased for 1.45V and the VCCIO and VCCSA both set to 1.35V to achieve this, but we can get the timings down to 14-15-15-38 2T and still be running 3600MHz. 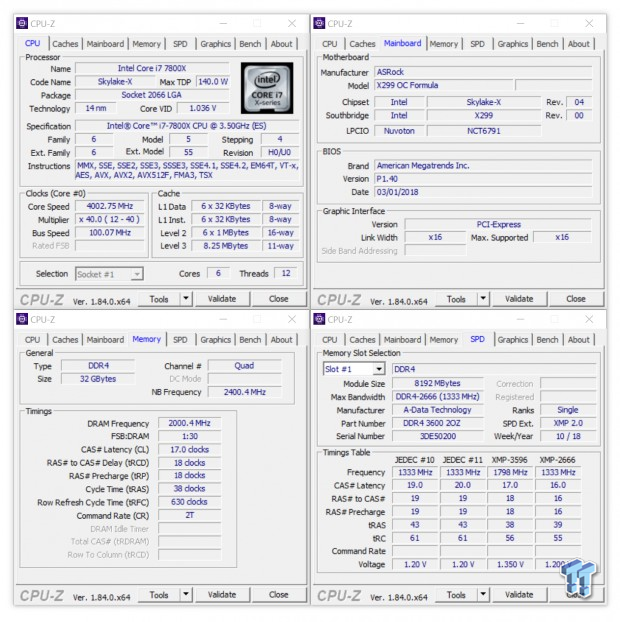 If you would rather increase the overall speed versus lowering the timings, the Spectrix D80 still had some room to go. We were able to run these modules at 4000MHz using the XMP1 timings. Keep in mind too, that this is across four sticks. Had this been a dual channel kit, there is a high probability we could have gotten higher overall speed from them. 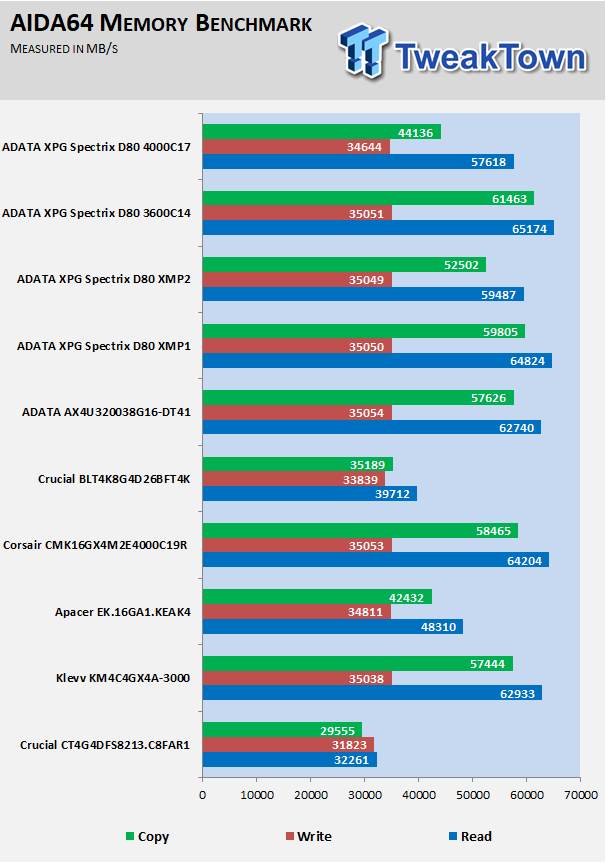 Right out of the box, using the XMP1 profile, we see the best read results in the chart from the Spectrix D80. The read results are in the top three, but the copy results are also chart-topping. The XMP2 profile performs as expected, and we see that for AIDA64, lower timings perform better than raw speed. 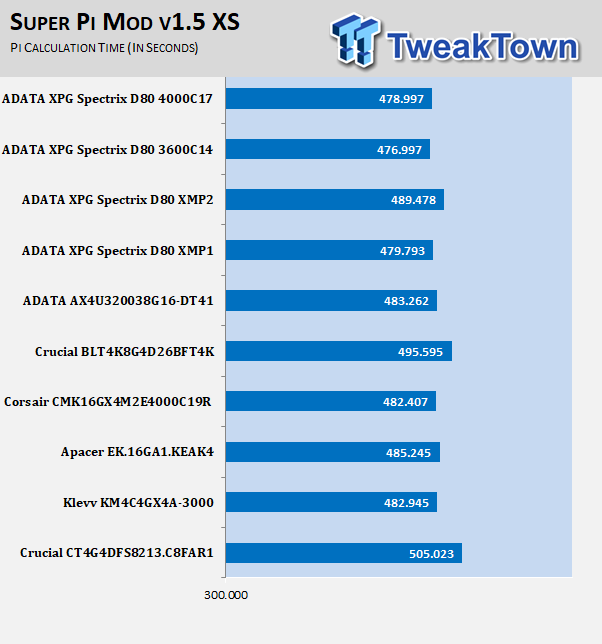 Looking at the Super Pi times in this chart, we again see that the Spectrix D80 delivered the lowest times overall. Using the XMP2 profile performs better than similar kits at similar speeds, and again, lowering the timings won out overall. 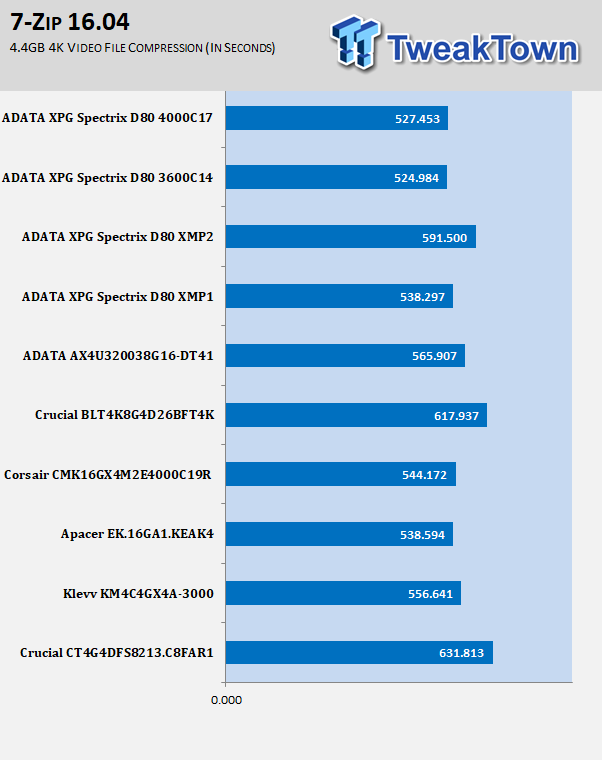 While just by the slightest of margins, the Spectrix D80 comes out the winner again, although very closely trailed by the older Apacer 3200MHz kit near the bottom of the chart. Opting for the second XMP profile loses a lot of steam when compressing files, but we do notice that overclocking is much closer when comparing lowered timings to overall speed.

Even without considering the obvious yet, the Spectrix D80 from XPG are beasts in performance and overclocking potential. In all of our charts, they come out on top, and numbers don't lie. Use of Samsung ICs is a considerable part of this, but with the advantages of dual XMP profiles to cover all types of users, and the headroom left when dropping the timings or attempting to hit the maximum stable speed, XPG left us with enough to keep us more than happy. The time it took to accomplish said overclocks were worth the effort whether looking to run synthetic benchmarks for glory, reducing the time needed for productivity tasks, and are snappy when it comes to gaming as well.

As you can see, in the image below, once powered and running in a motherboard, things get even better. While we do appreciate the opaque RGB LED lighting in many other kits, there is something to be said about the distinctly visible LEDs shining through the tube of Novec. The fluid bends the light, which makes each LED seems more significant than it is, allowing the color for one light to the next to bleed into each other. We realize many do not like the RGB of all things in the market right now, but we still have to give props where they are needed, and XPG did an excellent job on the Spectrix D80 as far as visual appeal. 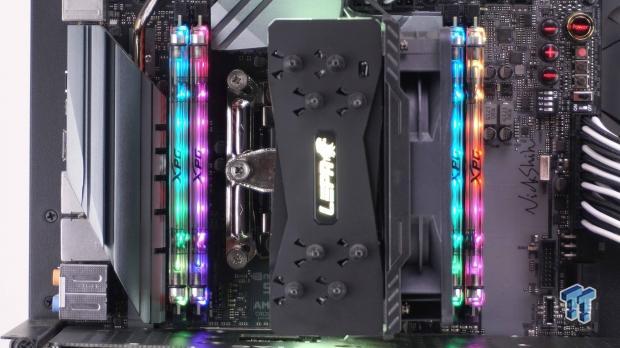 At this time, we do not see what the wait was all about, as the XPG product page still states that this memory is hybrid cooled. The reality is that it really is not though, and while we were asked to be gentle on this aspect, it is just hard to ignore. We attempted to see if thermals were reduced, and seeing forty-four degrees when testing this kit with everything we could through at it for load testing; we realized that the Spectrix D80 memory is not cooler than any other kit of DDR4 we have abused thus far. So please, if you are looking at this memory for the sole purpose of buying it to tell all your friends you now run liquid cooled RAM, the reality is, in this aspect, it is all show and no go.

As we attempted to locate this kit in the wild, we ran into an issue. We can find 3600MHz kits with the same timings, in both red and black heat spreaders, but the most density we can buy on this side of the pond are 16GB kits. Retail pricing on said kits is $199.99, and while we would assume buying more sticks would benefit from a slight price reduction, the XPG Z1 memory is $399.99 for a similarly timed and speed set of 32GB worth of memory.

Considering there is both the inclusion of the Novec, along with RGB LED lighting with the XPG Spectrix D80 3600MHz 32GB kit we just tested, we have a feeling you may even have to shell out more than $400 to obtain this kit. That being said, with the market what it is currently, the pricing is not all that bad, but for the masses, this is something that you will want, but have to save a while to obtain them. While the Spectrix D80 from XPG certainly have a lot going for them, the marketing and pricing of this product does cast a huge shadow that is hard to look past. On a personal level, we like them anyways, but the reality is, you are paying for things that do not work as advertised, and that is a tough pill to swallow.

The Bottom Line: Even with martketing written as it is, the performance, overclocking head room, and aesthetics still have us liking what we see! However, the price is restrictive to many, and we do wish all of the included features worked as intended!