Stellar fans if you have deep pockets! For the money, we would opt for the LL140 fans as they have the best features but for a subtler look, the ML140 PRO RGB fans are a good choice. Beyond the lighting, we do feel that the ML-Series is the better fan of the two!

Corsair has been selling fans with magnetically levitation blades for quite some time now. What started as single and twin-pack fans with gray blades and black frames has evolved.

The ML fans were next offered in solid LED color options of white, red, and blue, to deliver a bit of bling to case builds, but Corsair did not stop there. With all the hype that is RGB these days, it only makes sense that Corsair takes the ML120 and ML140 fans into this realm, and is why we have you here today.

Just like with the Dual-Light Loop fans, Corsair offers the ML-Series fans in single-pack or twin-pack configurations, but the singles LED effects will not work on their own, as they are sold to be additions to the twin-pack kits. Since the single-pack fans do not come with the RGB lighting hub, nor do they come with the Lighting Node PRO, this completely makes sense.

Aside from the extras that come in the twin-pack boxes, all of the ML140 fans are designed to deliver 55.4 CFM of airflow with 1.27 mmH2O of static pressure. Sound levels are rated at just 20.4 dB(A), they are PWM controlled, and come with a five-year warranty.

Pricing of the ML140 fans is as follows. To start things off, you need the ML140 RGB PRO twin-pack, which will set you back $99.99 to obtain it. Beyond that, if you want to use more than just that pair of fans, for each additional ML140 RGB PRO fan, you will have to fork out $39.99 per fan.

To us, this is asking a lot for a fan, but with what Corsair sends along, incorporating LINK software into the mix, outside of the LL Series of fans, these are some of the most feature-rich fans we have seen. 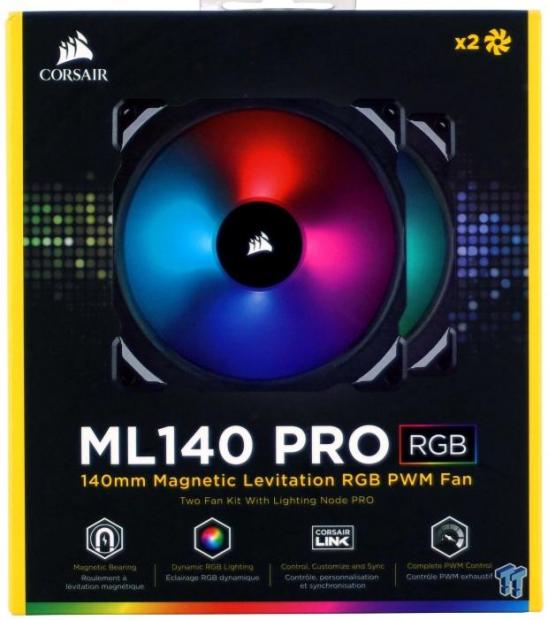 In typical Corsair fashion, the ML140 PRO RGB fans come in a black box with yellow highlights. We see a pair of fans on the cover, one with many colors displayed, while the one in the back is solid green.

Along with explaining that these are 140mm Magnetic Levitation RGB PWM fans, icons are denoting the maglev bearing, the dynamic RGB lighting, use of Corsair LINK, and that they have complete PWM control. 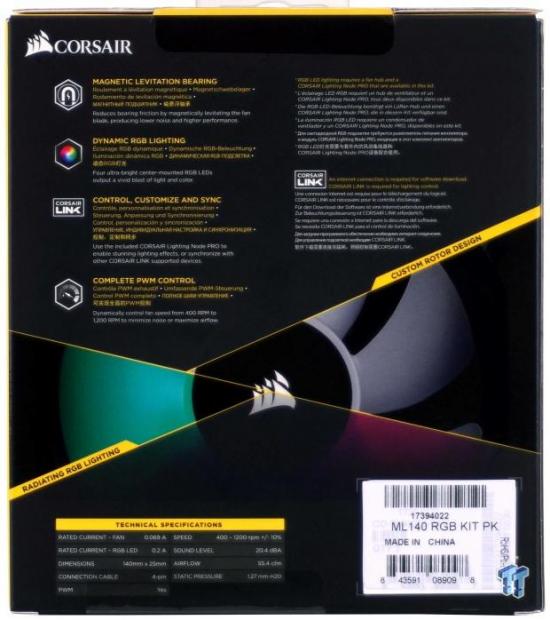 The information on the back of the box starts out with the same icons as we saw on the front. To the right is information about the need for the fan hub and Lighting Node PRO to make the RGB functionality work, and an additional section on the Corsair Link. The bottom half is where Corsair lists the specification and is also where the product sticker is located.

Inner packaging is robust, and stacking fans with the hardware box between them keeps the heaviest bits apart from each other. Wiring for the fans is contained in the thicker part of the yellow boxes, and everything else you need to get the ML140 PRO RGB fans up and running is contained inside of the thinner box in the middle. 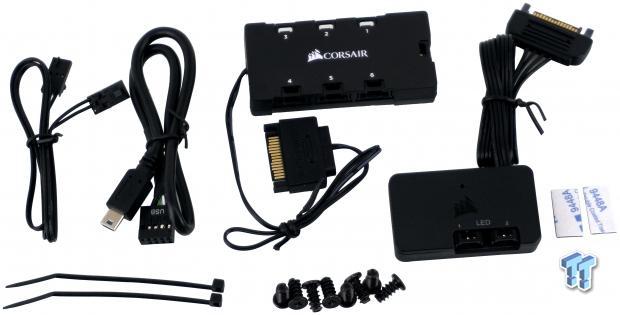 Accessories are quite abundant in the twin-pack. From left to right, we have the 3-pin but two wire cable which connects the hub to the Node, and next to it we see the USB cable that allows for software control.

We next run into the SATA powered fan hub, with the SATA powered Lighting Node and two 3M mounting pads next to it. At the bottom are the pair of zip ties to help with wire management, and eight fan screws to mount the pair of fans into the case. Single-pack fans come with only four screws and zip ties.

To ensure everything goes as planned, Corsair provides detailed instructions for proper connectivity of this system, that way they work the first time, without the need to go back later and troubleshoot them. They also include a second insert which goes over what Corsair will and will not cover for the duration of the five-year warranty.

At first glance, these ML140 PRO RGB fans look like all the rest, with the black frames, gray rubber anti-vibration pads in the corners, and the Corsair sticker covering the fan hub. What is different is that the seven blades are white, and each hub on the CO-9050078-WW fans has four RGB LEDs inside of it to provide quite the light show. The fans come with two wires, 4-pin fan power connection and a much thinner 4-pin connection which goes to the fan hub. 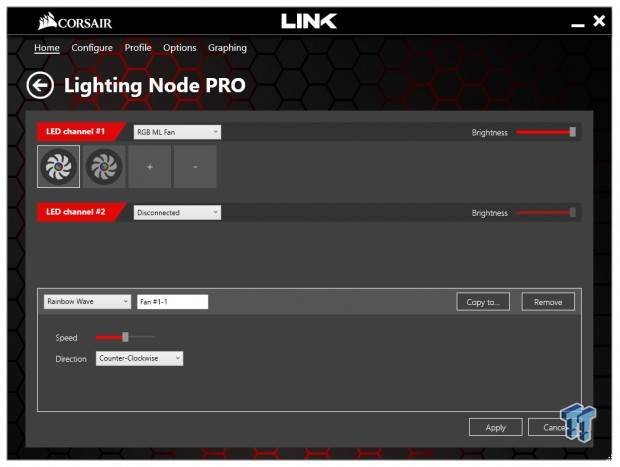 After the installation is complete, you may then power up the PC, and go to Corsair and grab the latest version of LINK software. Once installed and on the Home page, you can click on the section for the fans.

Once done, this is the window you will see, where fans can be added to the channels of the on the Lighting Node Pro, each of which can control six fans. Make sure the proper fan type is selected, click on the fan icons, and with the section below, you can change the modes, speed, direction, and sometimes the color. For more on this topic, see the video below.

We chose the most impressive mode for these fans to be displayed, in our opinion. Many times the LED lighting on the box is nothing like what the fans can do in reality, but with the ML140 PRO RGB fans, you can have exactly that.

Of course, there are other options as well, but there is no doubt in our minds that these are an attractive addition to any chassis with 140mm fan support and a way to view them.

While we do like the abilities of the Dual-Light Loop fans over these, the ML140 PRO RGB fans are a very close second place. The airflow has been raised, but the static pressure has been reduced, comparing the earlier LL fans to the newer ML fans, but the difference is minimal.

When placed behind a restrictive fan filter, they can lose up to half of their airflow, and noise will increase if the filter is very close to the fans. In normal testing, we find the ML140 PRO RGB fans to deliver only 32 dB to the room at maximum speed, and the airflow is sufficient to help keep a chassis well ventilated. We also noticed a lack of vibration with maglev fans, and while we expected as much, it is notably missing, and is impressive.

Once you go through all of the trouble of wiring, routing, connection, and selecting the proper fans in the software, then the fun begins. The fans can be turned off, but why buy RGB LED fans if you want to turn them off, but we can see where at night it could be a handy feature.

Outside of that, you can use two version of the rainbow modes; you can set them to any single color, you have an option to use them with just two colors on each fan. You can even see the thermal spectrum of the PC, as well as a couple of other modes you will see in the video as well.

The only problem we have with the ML140 PRO RGB fans is that Corsair only sent us two of them, as we wanted more to fill a chassis and see the effects in action on a larger scale.

Cost is a huge factor in whether or not the ML140 PRO RGB fans are right for you. Of Course, for $99.99 you do get a super attractive addition to cases with tempered glass bezels or those with large windows to see them hanging in the top or the back of the chassis.

However, if you have dreams of filling a chassis with say five of these fans we are already topping $200 in fans. While fancy and the Corsair fans do offer the best options for LED control and user-friendliness of the UI, you are going to have to pay up for that privilege.

To us, the fans are amazing, not quite as spectacular as the LL140 RGB fans we tested, but damn close to it. While pricy. Corsair and their ML140 PRO RGB fans are out to impress, and that is something they have certainly accomplished.

The Bottom Line: Stellar fans if you have deep pockets! For the money, we would opt for the LL140 fans as they have the best features but for a subtler look, the ML140 PRO RGB fans are a good choice. Beyond the lighting, we do feel that the ML-Series is the better fan of the two!