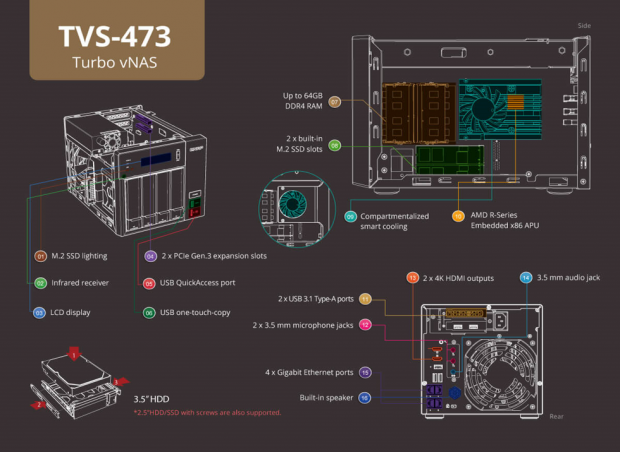 The SMB NAS market has seemingly begun to merge with the mainstream PC market. QNAP has thrown all of its chips on the table outright leading this charge with its full range of solutions from high powered Intel and AMD platforms aimed at providing all of your storage needs at home and on the road along with doubling as an entry-level PC with their Q vPC platform.

QNAP continues its tradition of a gold finish on its AMD platform with the TVS-473. This, as the model number should dictate, is a four-bay solution, built on the AMD Merlin Falcon platform launched in 2015. This SoC houses two CPU units with two cores and eight GPU Compute Units. This solution is clocked at 2.1GHz and consumes 15W TDP. This solution is capable of processing both DDR3 and DDR4 with QNAP opting for 8, 16, and 64GB DDR4 configurations.

At the core, this solution runs on the QTS 4.3 software platform with client support for Linux and Unix platforms along with MacOS and Windows 7 through 10 and Server 2003 through 2012 R2. 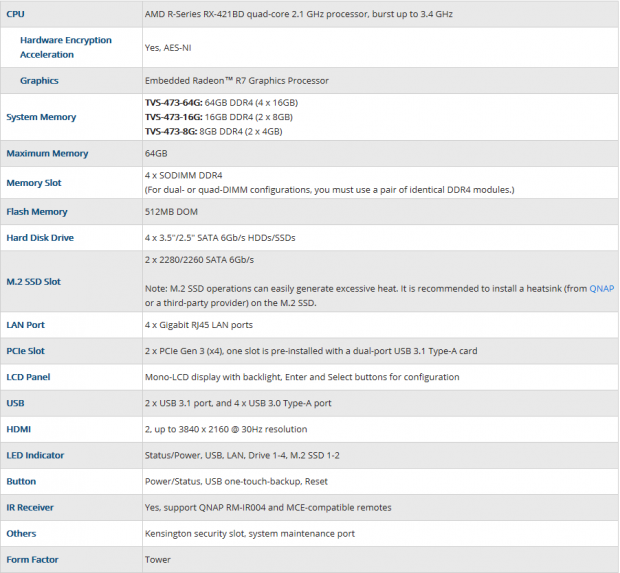 Hardware specs above go into more detail on the NAS. As mentioned, we have an AMD platform with three memory options available direct from QNAP. With that comes hardware encryption via AES-NI and support for a maximum of 64GB. Memory is slotted using four onboard SO-DIMM slots. The software or firmware of the machine is installed on a 512MB SATA DOM while the unit supports four 3.5" HDDs along with two 2260 or 2280 SATA SSDs.

On the rear of the unit, you will find four Gigabit Ethernet ports below three USB 3.0 ports and two HDMI 2.0 capable of pushing 4K30p video via the R7 graphics core. Expandability is furthered with two PCIe 3.0 slots, one occupied by a USB 3.1 card while the other lies empty. For our testing, I installed a Mellanox ConnectX-3 Pro in the TVS-473 and set it up on our 10Gbe network. 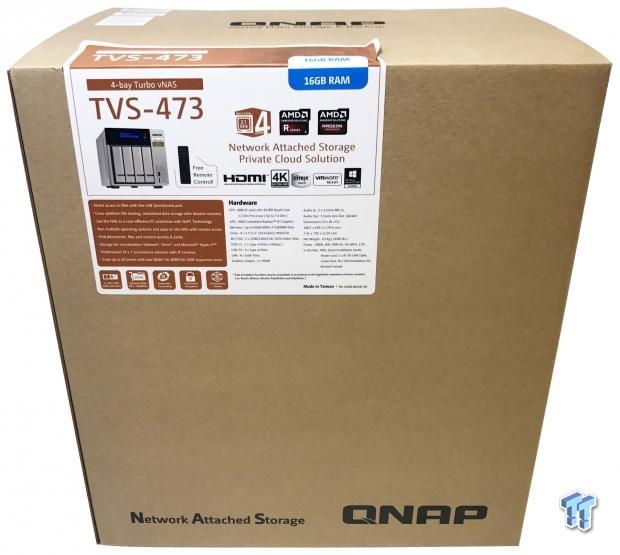 Packaging is a familiar brown box and sticker attached with model info and features. As you can see, I have the 16G model in for testing. 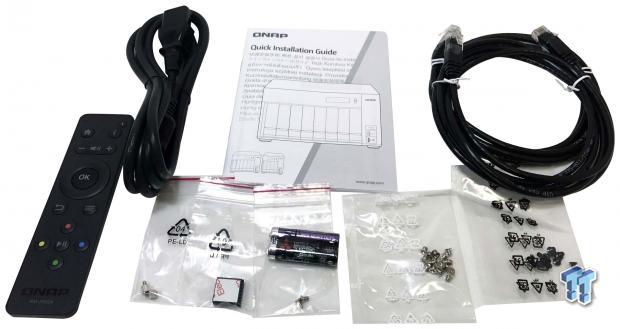 The scope of delivery is complete with a media remote, power cord, and ethernet cable. The smaller bits include drive screws for 2.5 and 3.5" drives and a heat sink should you install an m.2 SSD. 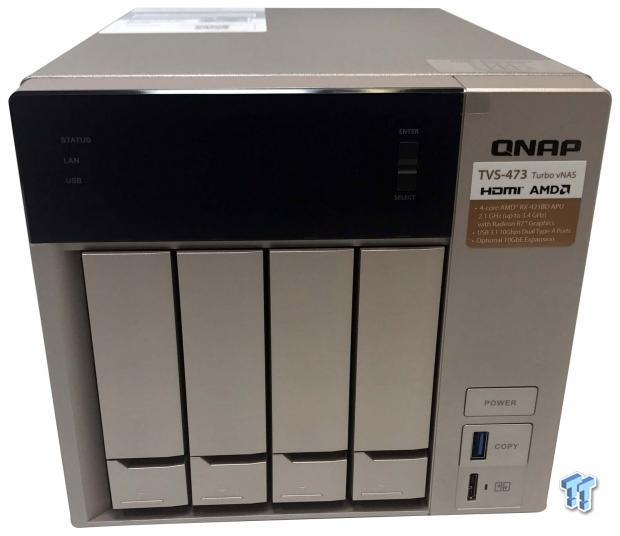 As mentioned briefly, AMD units are catered to this gold finish. The front housing an LCD panel up top with the power to the right. 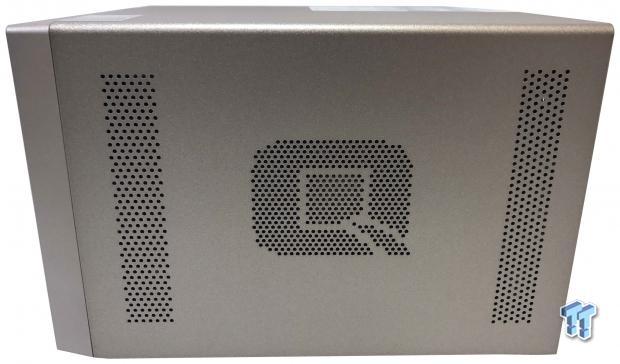 The side panels are punched through with a QNAP logo. 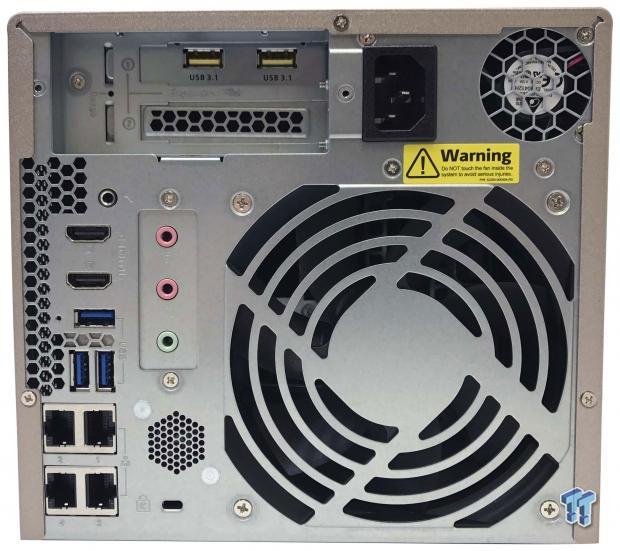 The rear I/O includes dual USB 3.1 on the PCIe Expansion card, power to the right of that. Down below two HDMI ports along with 3.5mm jacks for mic input and speaker output. USB 3.0 is up next in blue, and we round out with quad RJ45 Ethernet ports. 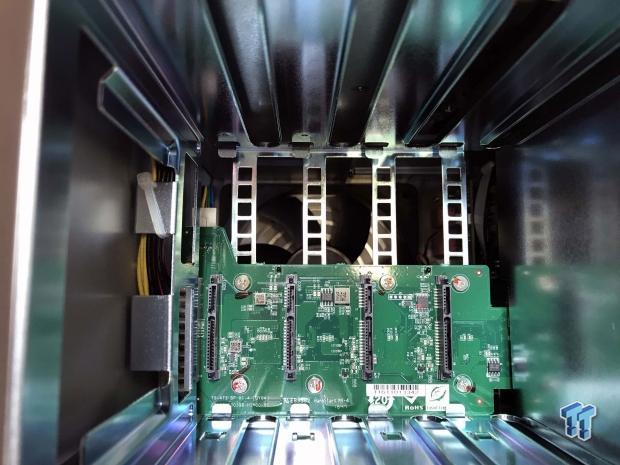 The backplane is SATA only, so order your drive accordingly. 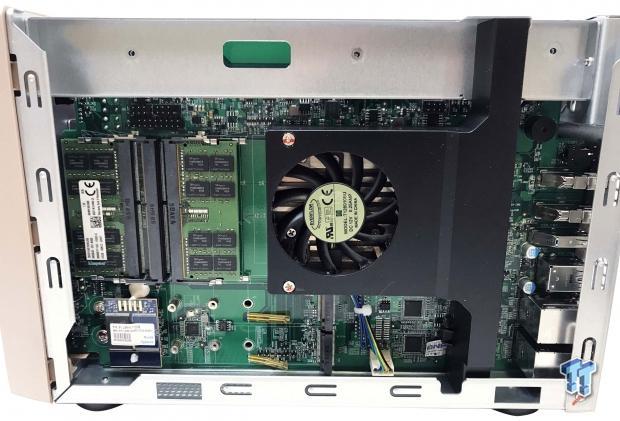 Removing the side panel, we have access to the memory slots, cooling fans, and m.2 slots down at the bottom. 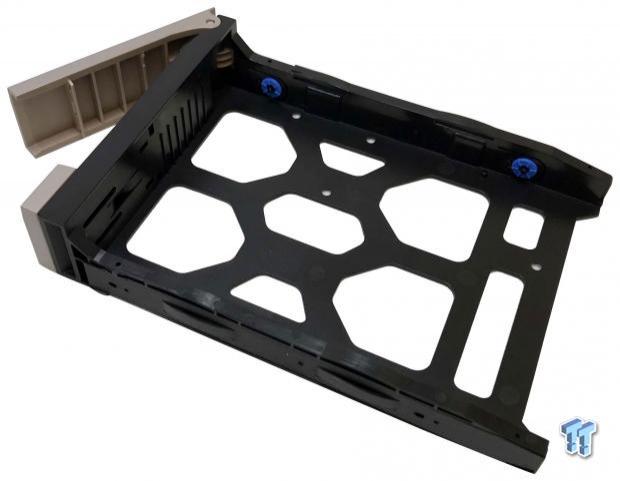 The drive trays follow the gold design but are 100% tool-less and plastic. 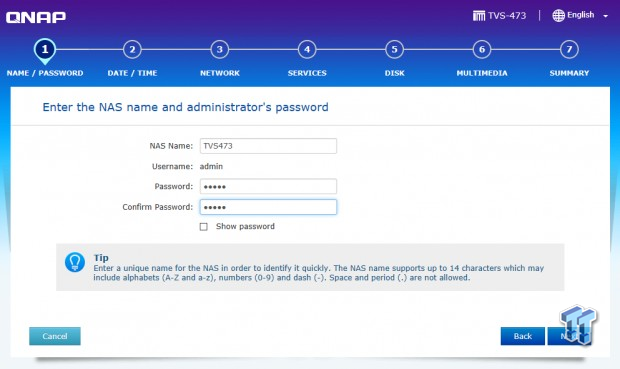 Setup hasn't changed much over the years. For the TVS-473, we start with configuring the password and naming the NAS. To continue, we follow the wizards through date/time, network setup and services.

The desktop offers several icons or navigating the interface. From the left, we have a control panel which will house many of the features you will need during set up. File Station allows you a way of managing your files locally, and myQNAPCloud is the gateway to your NAS on the go. Of course, we have App Center for running services such as Plex, QvPC, and others. 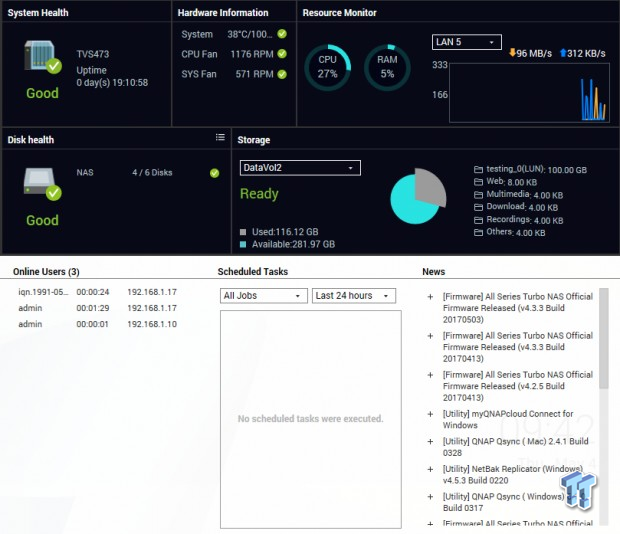 QTS gives you a peek of the overall system resources along with a news feed at the bottom right. 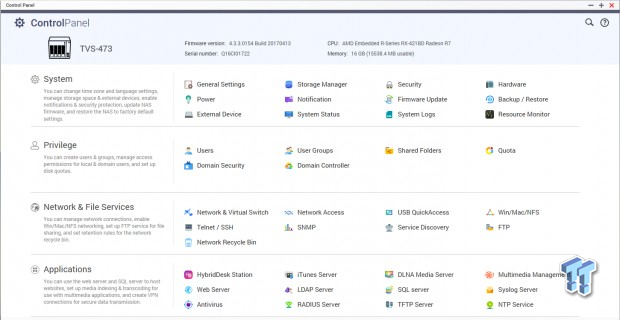 Diving into the control panel, QNAP has done a remarkable job cleaning thing up and organizing them into groups making it easier to find what you need. 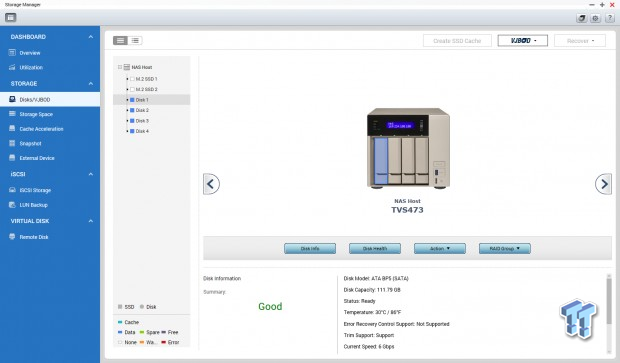 Storage Manager has its own full menu to the left. 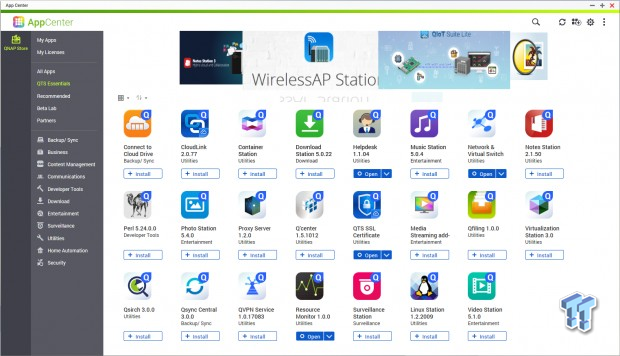 The app store seems to have grown since our last look at a QNAP appliance. The left sidebar breaks things down into groups, and the right side gives a broad overview of the apps available. 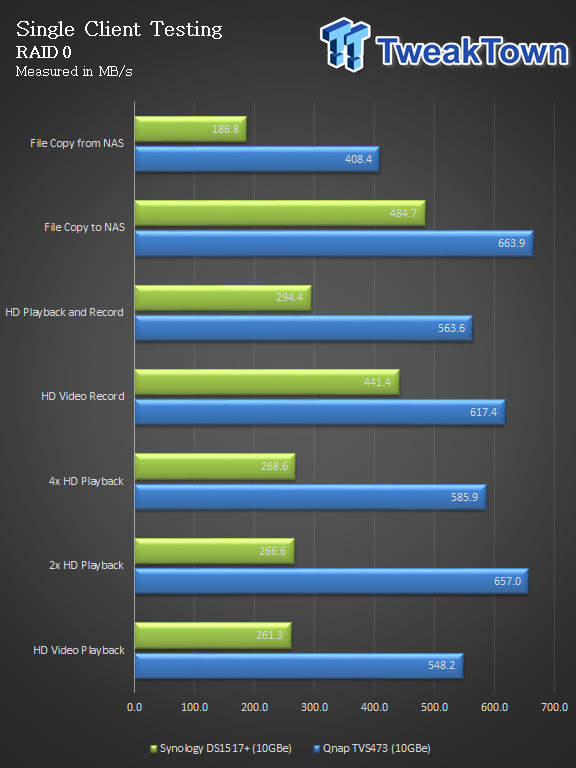 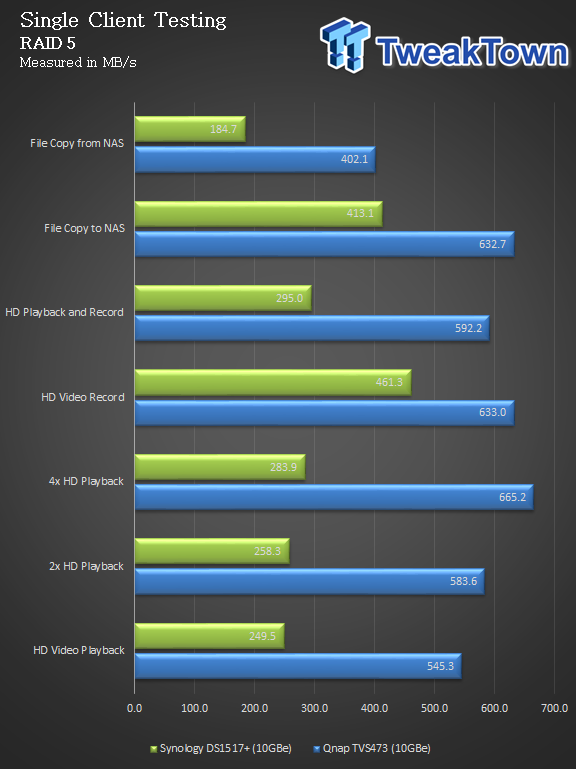 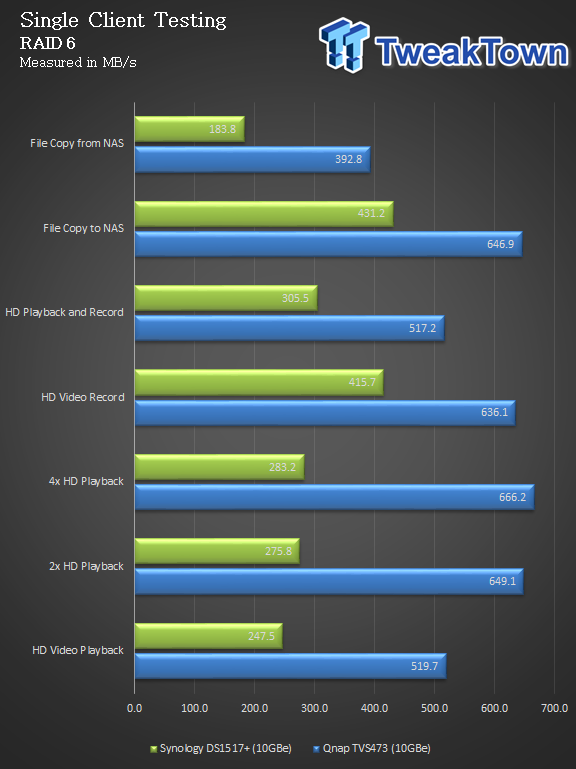 Stepping to dual redundancy, we see a peak of 665 MB/s in playback with Record touching 636 MB/s. Our file copy numbers took a slight hit coming from the NAS at 392 MB/s, but to the NAS we still see 646 MB/s.

Our Sequential read/write workload is centered on 128K transfer sizes 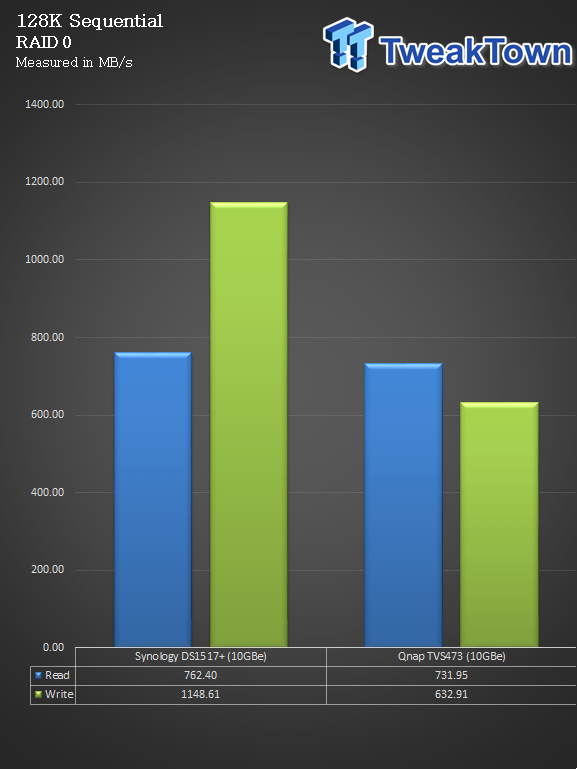 Sequential read, in RAID 0 topped out a touch under 800 MB/s. Write performance was slightly lower starting at 240 MB/s and increasing up to a peak of 663 MB/s. 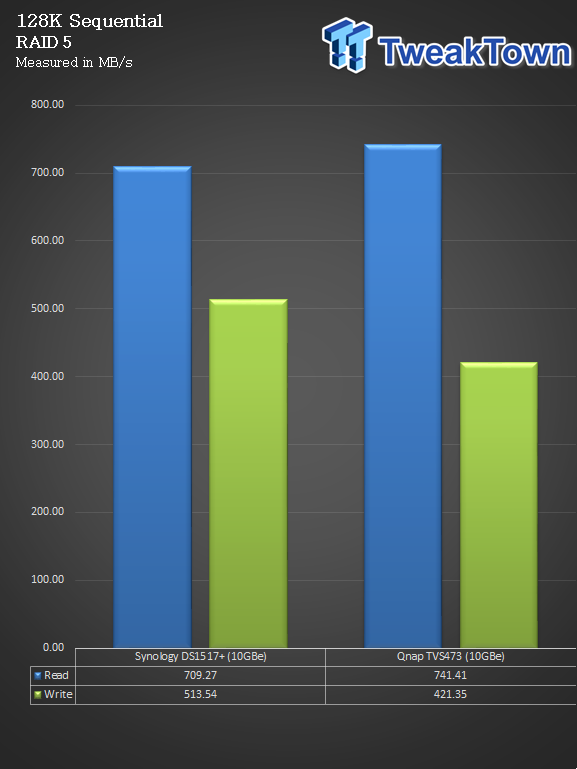 RAID 5 we see similar results with read performance peaking around 780 MB/s while write performance stumbles around 200 MB/s with peaks at QD64 at 440 MB/s. 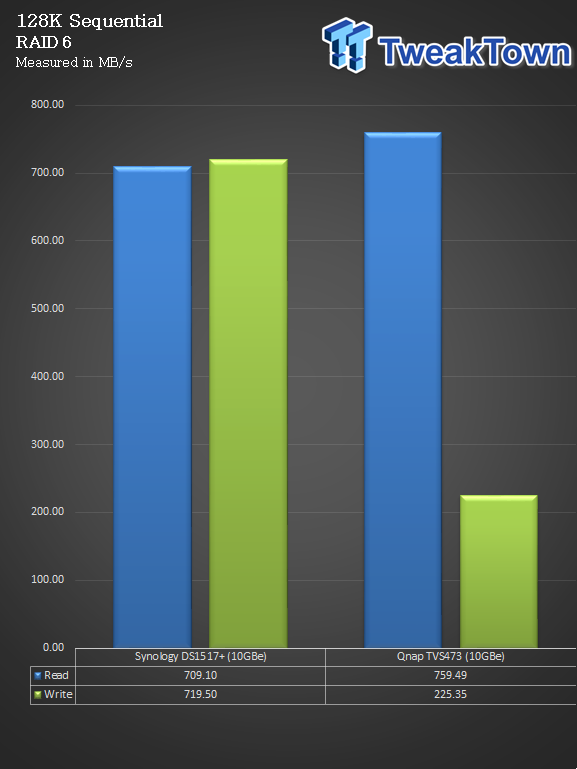 Write performance for RAID 6 was quite consistent around 200 MB/s while read performance looked strong from QD4 through QD128. 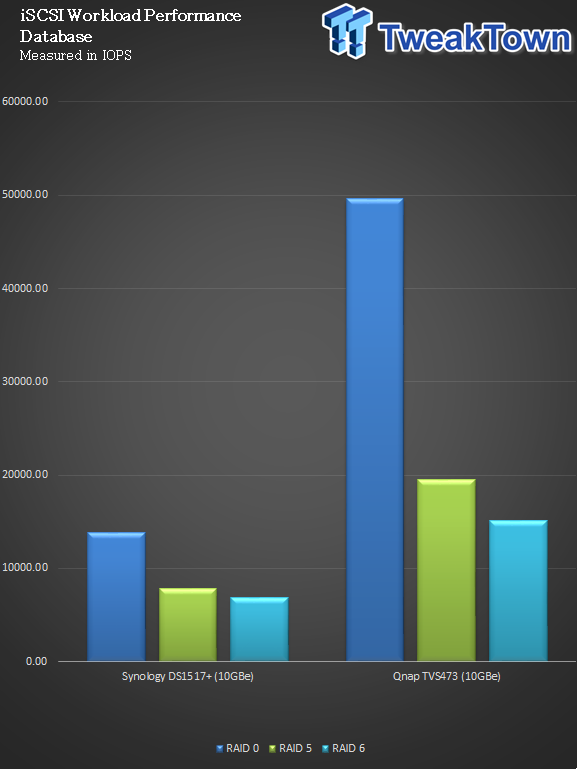 Starting off our workload performance testing, we see RAID 0 push database upwards of 50K IOPS for the QNAP while RAID 5 and 6 see 20K and 15K IOPS, respectively. 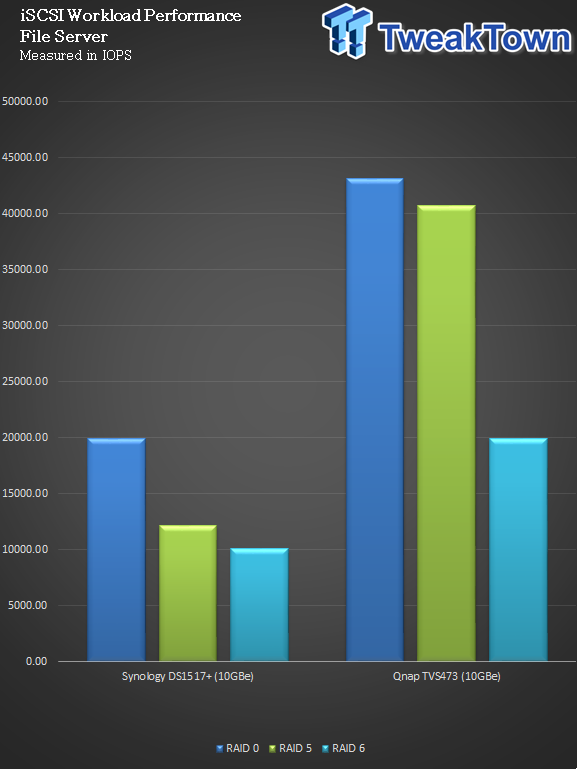 File Server continues the tremendous performance of the TVS-473. RAID 0 and 5 showing nearly the same performance at 43K and 41K IOPS with RAID 6 showing 20K IOPS. 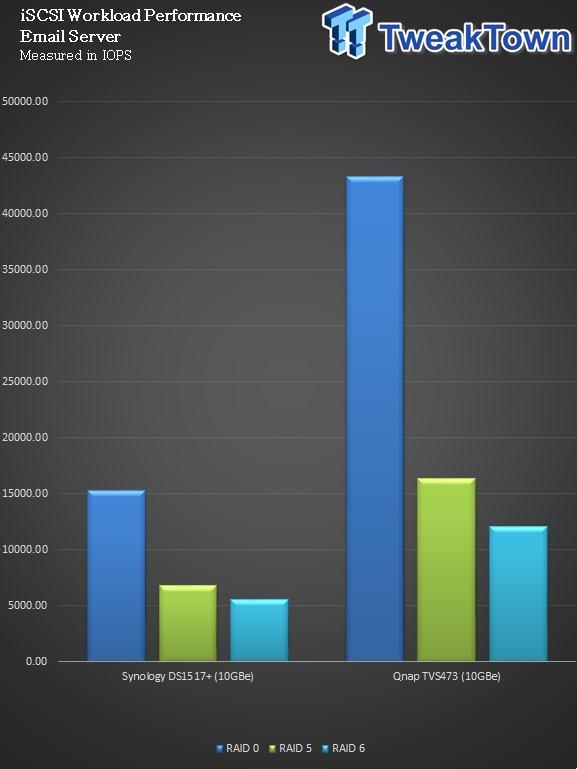 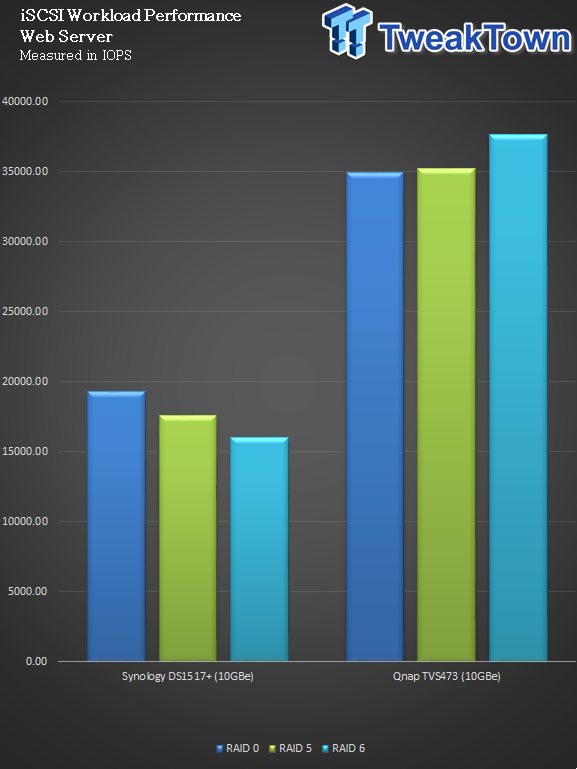 Web Server gives us interesting results with all three arrays performing exceptionally well. Here we have 35 K IOPS for RAID 0 and 5 with RAID 6 peaking near 37K IOPS. 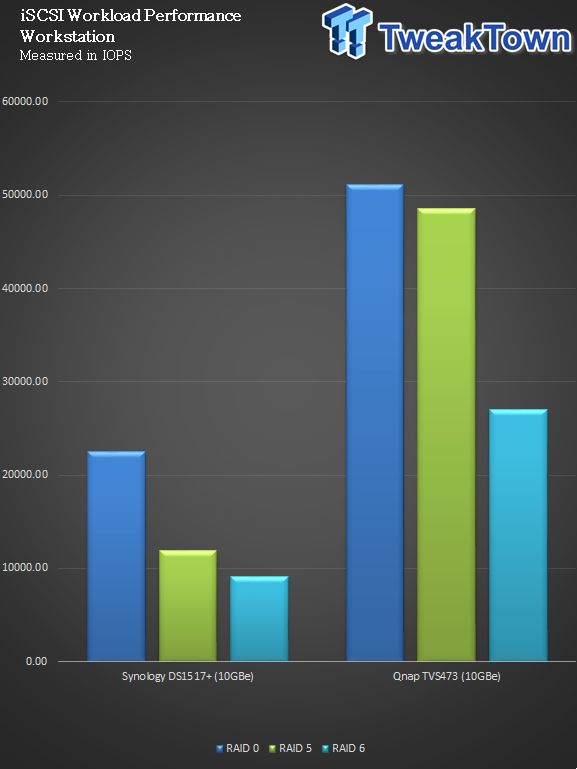 Workstation topped 50K IOPS in RAID 0 and not far behind we see RAID 5 around 48K IOPS. RAID 6 finishes our testing at 28K IOPS.

It has been a few months since I last had a QNAP system in the lab, but the TVS-473 is a reminder why they are a market leader and have been for quite some time. QNAP platforms typically cost a bit more depending on the build. For instance, this four-bay platform is carrying a $1299.99 MSRP being a 16G model. With that said, QNAP platforms also tend to be more than a data storage system. That is the case with the TVS-473.

The TVS-473 was our second AMD platform NAS to come through the lab, and again, I'm pleased with the results. Regarding build quality, the QNAP name should offer a few bonus points, but minus the color of the enclosure, it's a solid platform. Both the front a rear I/O of this unit is stacked top to bottom with external connectivity, and internally QNAP has chosen to add PCIe access should you want to take things further, as I did by adding the Mellanox ConnectX-3 Pro for 10Gb testing.

The performance was hands down amazing. In conjunction with our 10Gbe test network, I was able to pull off solid 50K IOPs performance in mixed workloads while sequential reached 740 MB/s read and 400 MB/s write. Our single client NASPT testing showed this unit consistently quicker than the comparable platform with peak performance coming from 650 MB/s in playback to 620 MB/s in record. File Copy operations peaked at 660 MB/s by 420 MB/s, respectively.

QTS too has changed as a mentioned in the review; it seems a bit more refined with the entire platform being categorized including the control panel which for me gives a cleaner flow. The app store continues to expand and includes must have apps like Download Station, Virtualization Station, and Plex.

QNAP is doing great work with its embedded NAS platform using AMD APUs. The TVS-473 is a solid device top to bottom which can handle both your data storage needs and no doubt double as your mainstream value PC.

The Bottom Line: QNAP's TVS-473 NAS is a damn fast machine. It eats data storage for breakfast and can be your PC at lunch - a true workhorse machine that comes recommended.