Even at my worst times of energy deprivation, it takes a pretty special movie to almost put me to sleep, and something which I might add happens extremely rarely. But despite a very loud and rancorous action scene taking place on screen, 30 minutes into the latest Pirates of the Caribbean epic, I found my eyelids taking a break as my special place beckoned me to shut everything out.

And I guess that's a pretty good allegory for Dead Men Tell No Tales. Everything's unfurling entirely as expected, but it's tired, unengaging and ultimately sleepwalking to its conclusion. So how did one of the most lucrative Hollywood franchises of recent times come to this? 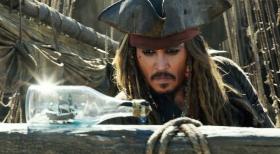 After becoming freed from the purgatory of the Devil's Triangle, Captain Salazar (Javier Bardem) and his crew of undead pirates make haste for Captain Jack Sparrow (Johnny Depp), as recompense for his part in their demise years earlier. While robbing a bank on St Martin island, Sparrow makes the acquaintance of fugitive Carina Smyth (Kaya Scodelario), who's on the hunt for the powerful, yet mythical trident of Poseidon which holds the key to reversing all curses of the ocean, including the one that prevents Salazar from returning to physical form. 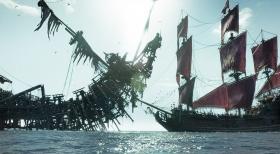 While I doubt Tzu was thinking about motion pictures when he coined the phrase "the flame that burns twice as bright burns half as long," it seems to be a perfectly apt description of Disney's pirate franchise. Initially starting out as fresh and unexpected in The Curse of the Black Pearl, the series gave way to two indulgent sequels which admittedly capped off the trilogy rather well, before the studio decided to dip back into the well with On Stranger Tides, which bore all the hallmarks of franchise fatigue.

But even after a six-year hiatus, a new directing crew and two young leads who are presumably Disney's insurance policy for a life sans Johnny Depp, Dead Men Tell No Tales sails straight into the known, a would-be greatest hits package which utterly fails to relive the previous glory. 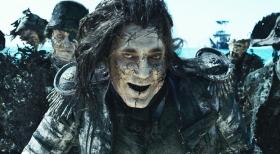 Reprising his role with hardly the gusto that $20 million should ensure, Johnny Depp phones in another arm-flailingly smashed performance as Captain Jack Sparrow, which far from the exciting and risqué performance which scared conservative Disney suits way back when, now just serves as a tired and predictable pastiche. To be fair, there's probably little the actor can do to freshen up his character, but it really beggars belief that after five movies he's become reduced to a one-dimensional caricature.

Worse, Javier Bardem is entirely wasted in the role of unmemorable big screen baddy Captain Salazar; a far cry from his terrifying Oscar-winning performance of No Country for Old Men or even Skyfall. Fans will no doubt appreciate the return of fan-favourite ex-villain Barbossa, as well as brief cameos from Orland Bloom and Keira Knightley, but their presence just reinforces how tired it's all become, having previously bid goodbye to the series in an emotionally befitting manner. 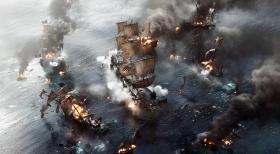 Norwegian directing duo Joachim Rønning and Espen Sandberg make their Hollywood debut with Dead Men Tell No Tales, and whilst I admit I've not seen their prior, nautically themed work Kon-Tiki which Rotten Tomatoes suggests is rather good, I've no doubt that Disney selected them based on the need to economically produce a film in a notoriously difficult sub-genre that's often beset by economic blow-ups (see Cutthroat Island and Waterworld). But rather than steer the franchise into uncharted waters with a fresh set of new eyes, Rønning and Sandberg have produced a feature which bares all the hallmarks of a studio mandated checklist.

Ultimately, the latest Pirates of the Caribbean features the same amount of cinematic nutrition of that bag of popcorn that sells for a small fortune at the candy bar. After the lights come up, you're never going to give it a second thought. 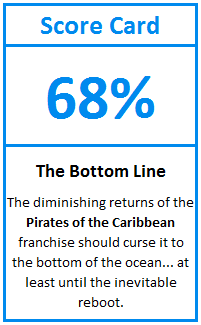