It's almost hard to believe, but it's only April, and Power Rangers marks the 79th sequel, reboot or remake to hit cinemas just this year! I'm kidding (or am I?), but it's pretty hard not to notice the general lack of originality that the Hollywood cycle is aggressively courting at the moment, all in the interests of turning a guaranteed buck without the associated risk of a unique product.

It's sad, but it's also economics. Even with that advantage, Power Rangers does have its work cut out to appeal to today's youth and the 30-somethings who grew up watching it. So how exactly does it fare? 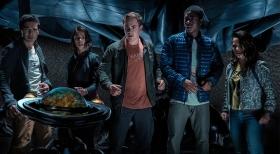 When five teenagers stumble across a downed alien craft in an abandoned gold mine, they're granted immense physical powers that require working together to unleash their full potential by 'morphing.' And they'll need to do it quickly, because fallen Green Ranger Rita Repulsa (Elizabeth Banks) and her army of Putties have been bought back to life on Earth, and she's determined to take it out in the process. 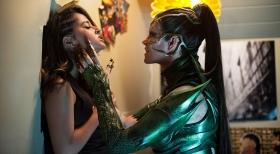 Despite being a child of the 90's, I don't reserve any special nostalgia for the Mighty Morphin' Power Rangers, mostly down to the fact that it's envelope-pushing violence (hugely controversial for the time) was at odds with my strict religious upbringing. That said, I do remember viewing a few episodes (please don't retrospectively punish me, Mum) and I can recall the rocking theme song and the expensive action figures that all the cool kids owned.

It's hardly high art, but at a time when Transformers and Pirates of the Caribbean can spawn multi-billion dollar film franchises from such humble beginnings, well, there's no reason that this old franchise can't do the same. Sadly for this Power Rangers reboot, both aforementioned franchises are infinitely more enjoyable movie-going experiences than anything that Power Rangers can muster. 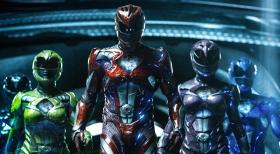 Long-time fans will enjoy the reprise of the classic theme song (albeit rather briefly), and the so-bad-it's-good line "It's morphin' time" will make even the most jaded armchair critic smile. Indeed, the first hour of Power Rangers starts off quite promising. I would even go so far as to say it was quite enjoyable. Admittedly it doesn't always make a whole lot of sense, with events occurring quite conveniently because the plot dictates, but it's not as if anyone should have expected any less.

Thanks to the charm of some of the young cast (particularly CJ Cyler), getting to know the key players and going on their journey of discovery is rather interesting. Unfortunately, once the film kicks into action, it quickly descends into groan-inducing predictability and cliché. Perhaps Power Rangers greatest flaw is that there's just no sense of fun about any of it, and at two hours runtime, it's way, way too long.

I'm quite sure that those with shorter attention spans that I will struggle. Elizabeth Banks as baddie Rita Repulsa is the clear highlight of the film, with a role that's totally committed to the bizarre. Juxtaposed against a film that plays it pretty straight makes her performance even weirder by comparison. 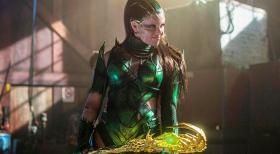 There was never any chance that critics were going to give the thumbs up to Power Rangers - but that's no excuse to make a sub-par film that fails to appeal to an audience of newcomers, or a returning one.

Before I wrap up, I feel the need to address the embarrassingly excessive product placement for the Krispy Kreme donut chain that's littered throughout. I can't recall having written about this previously, and I have no objections to minor usage. To the contrary, it can actually serve to make the backdrop of a film more realistic. But it's one thing to have an out-of-focus can of Coca-Cola inconspicuously in the background, to having a major plot point revolve around a donut store, complete with lingering exterior shots, literally stopping an action scene to show a character eating a Krispy Kreme donut, along with frequent name dropping.

It's frankly embarrassing and a final insult to audiences who've paid good money to see a film. I hope the bucket loads of money for the endorsement was worth it. 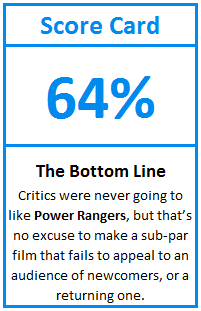