NETGEAR's Arlo Pro solves several issues from the original model including rechargeable batteries and two-way audio, while adding some nice new touches, but the price tag may bar entry for some.

NETGEAR has been hard at work expanding their network camera lineup since the first launch of Arlo nearly two years ago. All of that hard work has produced several models including Arlo Q, Arlo Q Plus, Arlo Baby, Arlo Go, and Arlo Pro, the model we have in house for testing right now.

Arlo Pro retains much of the original design including its pearl white exterior and small form factor. It uses the same extremely powerful magnetic base allowing it to be installed anywhere in the range of its base station. This new unit is still 100% wire free, but NETGEAR has done away with the CR123 lithium cells for a much preferred rechargeable solution.

Upgrades for this new Pro model include a rechargeable battery at 2440mAh, microphone and speaker for two-way audio, and a digital infrared sensor. The camera itself has a 130-degree FOV with a full-color CMOS sensor configurable up to 720p, and its night vision capability is similar at 25 feet.

Upgrades will also be found in the new base station starting with the processor, a 900MHz Cortex A7, 128MB of memory, and 128MB of NAND flash. Wireless functionality is done over a 2.4GHz 802.11n radio, and wired connections are limited to fast Ethernet functionality.

The MSRP of the two-camera Arlo Pro kit comes in at $419.99 with a one-year warranty. 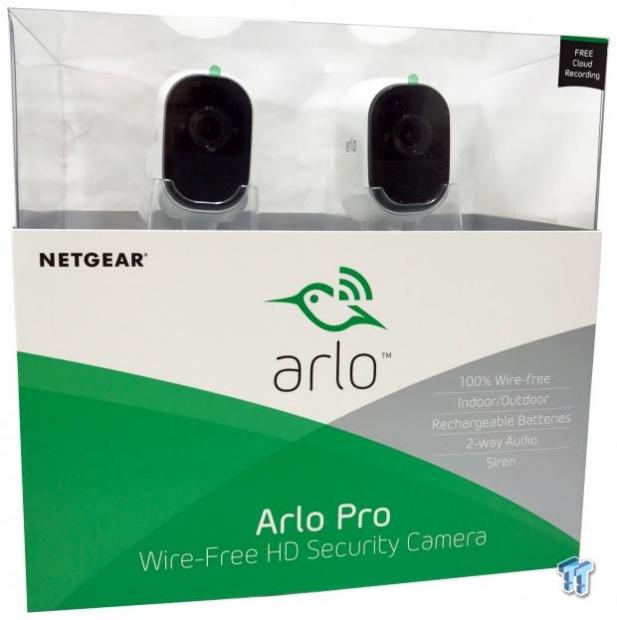 Packaging has a little more color on it this time around; we still have the cameras sitting atop behind clear plastic. 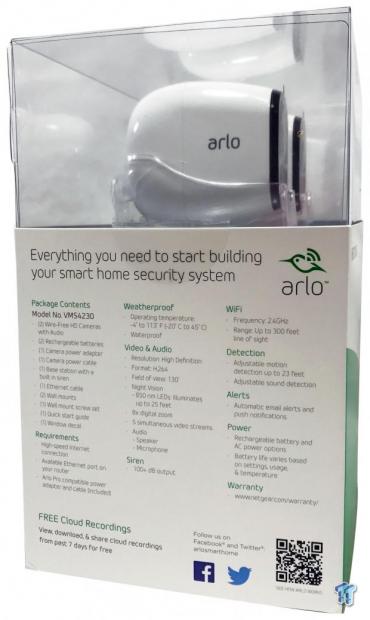 The spine has a specifications list for the two camera kit. 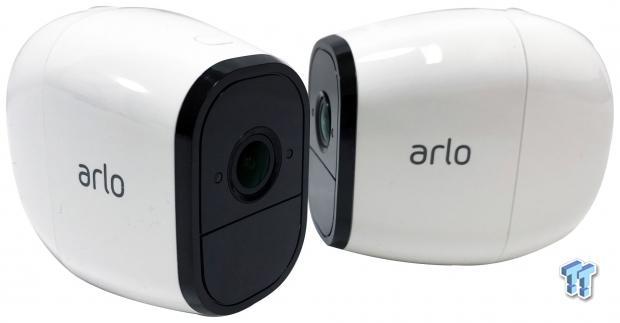 Looking at the cameras, we have that same Arlo design, although it has changed ever so slightly. The face of the cameras is now flat whereas the original Arlo had the motion sensor bubble. The enclosure looks like it has been elongated slightly to make room for the rechargeable battery. 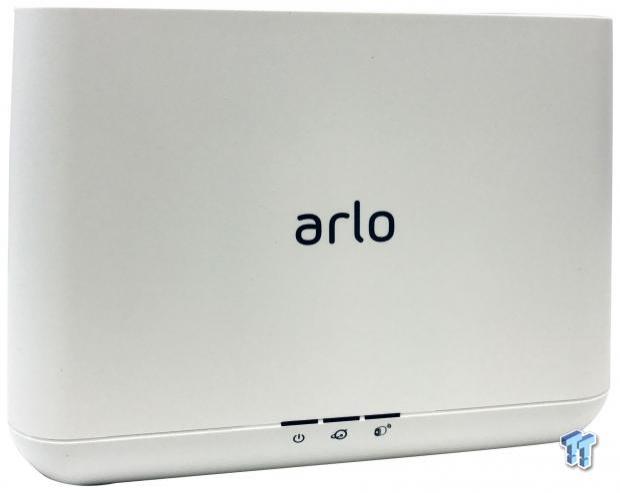 The new base station is quite a bit bigger although shorter with a thicker base. The front has LEDs for power, connectivity, and cameras. Now there is also an "arlo" logo instead of "NETGEAR," which is far better. 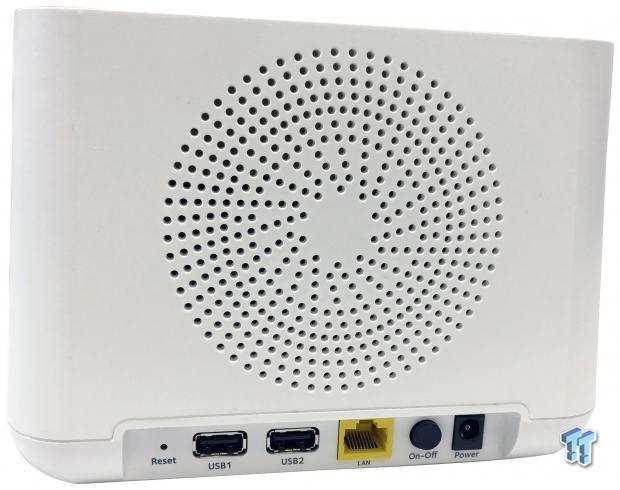 The backside houses the massive siren speaker, both USB 2.0 ports, and the LAN port. The siren is rated at 100+ dB, and it's rather loud. It wasn't as loud as our regular house alarm, but it should still cause some shock, and your nearest neighbors should be able to hear it.

The top of the base station houses a large sync button that doubles as the siren off button. 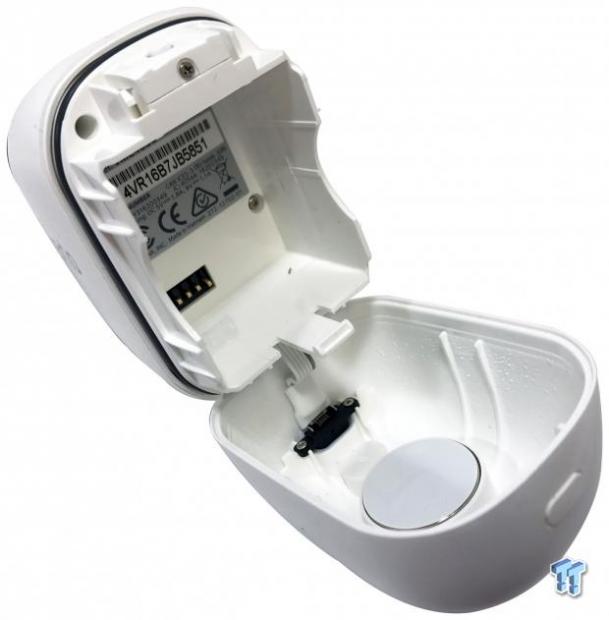 Internal to the cameras, you can see the USB charging lead runs through the bottom of the enclosure with the magnet attached to the back. The battery port is wide open and connects via four pins at the bottom. 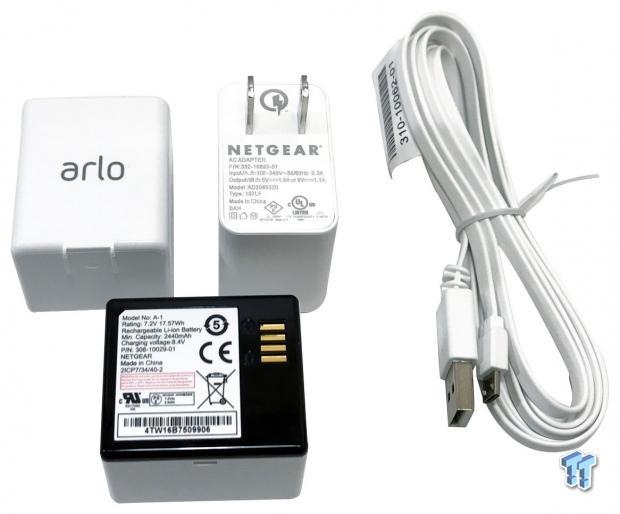 You receive a battery for each camera in the kit, but only a single wall charger and USB cable. The battery life is said to be between four and six months and take about two-hours to recharge. Having to replace the batteries fairly often with the original Arlo was a bit of a pain and fairly costly, so it's great to see charging ability added. 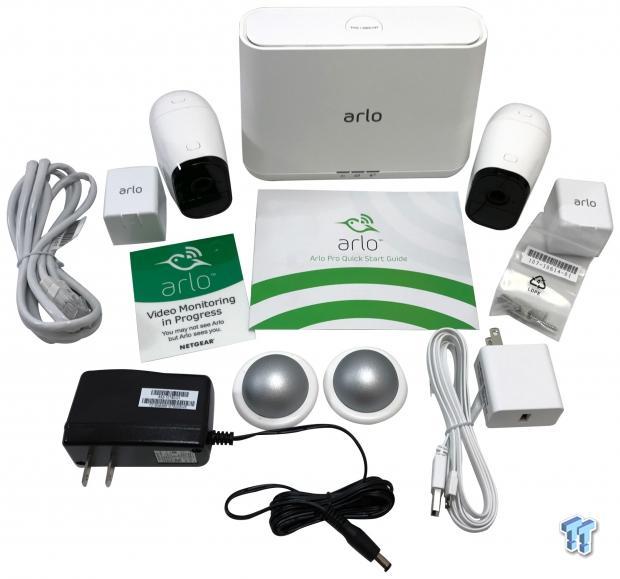 Above, we have the full two-camera kit laid out on the table. We like the addition of the two-way audio capability in Arlo Pro, something we thought was missing from the first Arlo. Sound playback through the included camera microphones is decent, but the sound playback through the camera speakers could be a bit louder and clearer, but it does get the job done for basic communication. 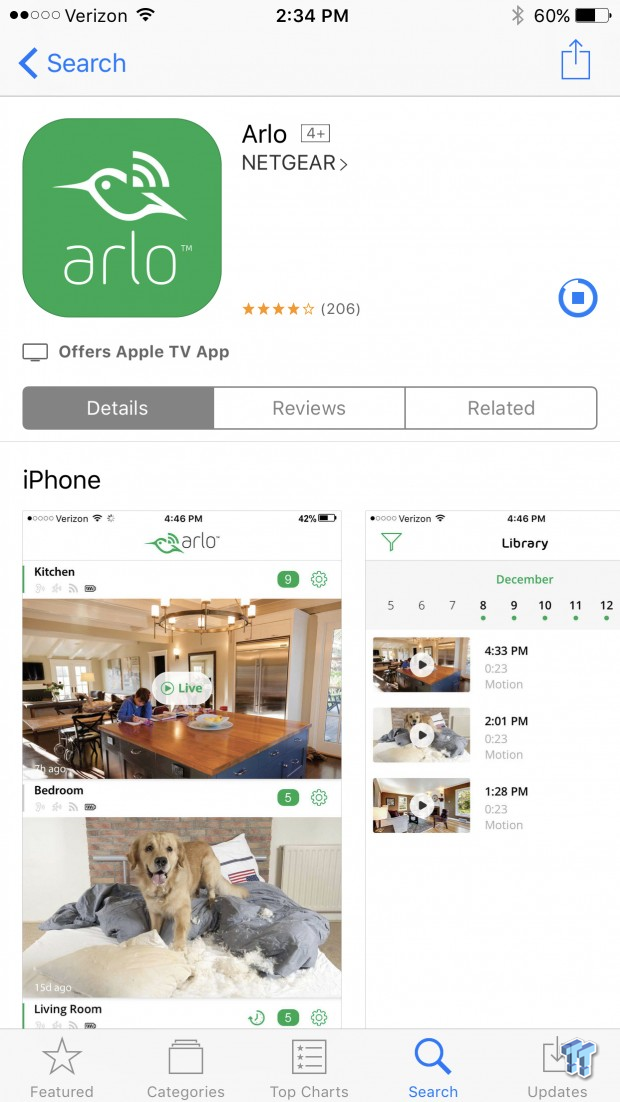 The app for iOS appears to be the same and does come with an Apple TV app if you have a 4th Gen Apple TV. 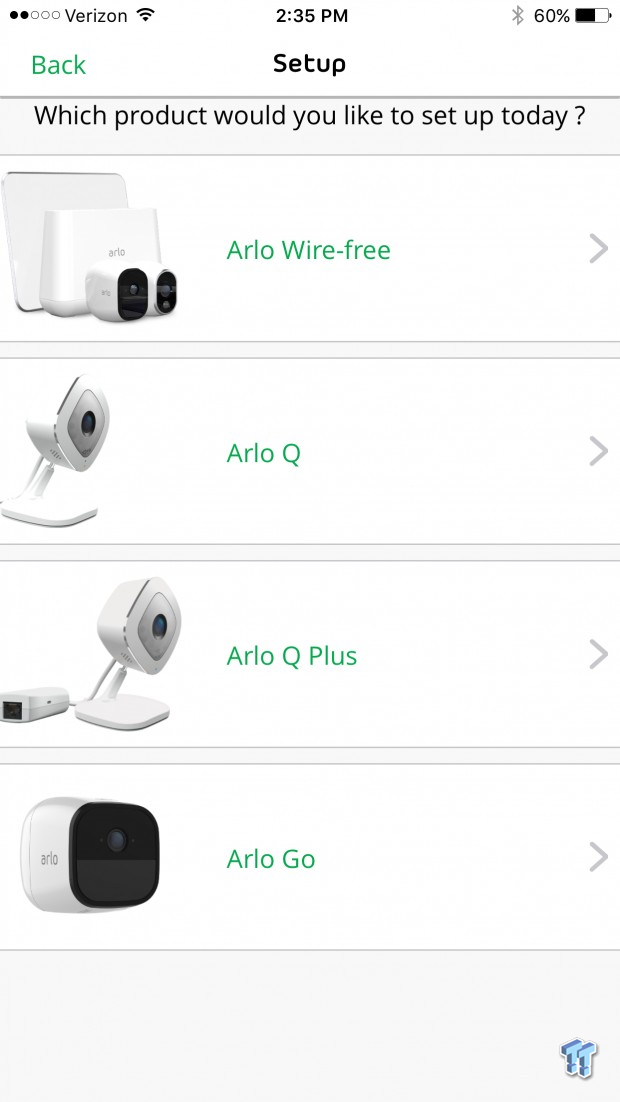 Setup includes options for most of their current cameras. We are going with Arlo Wire Free at the top. 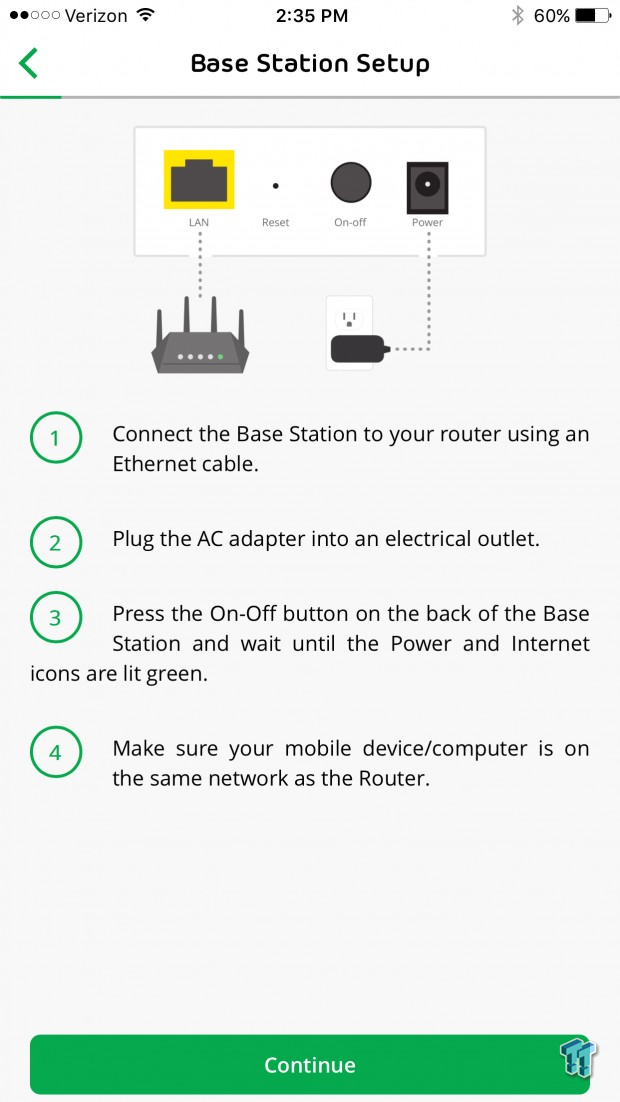 The next screen guides you through base station setup. 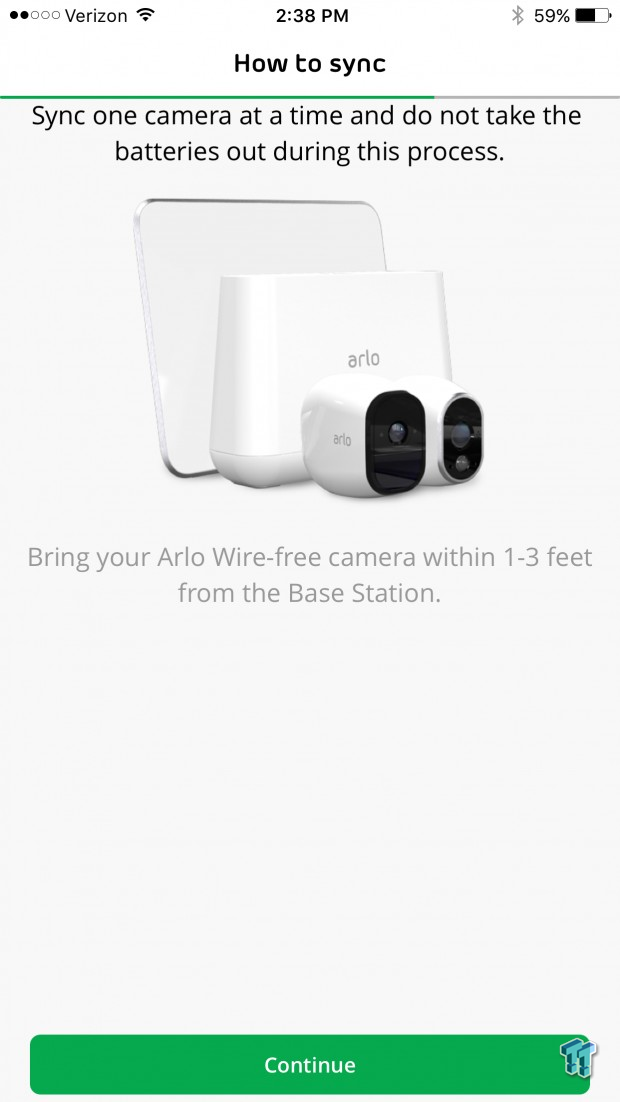 We then start syncing cameras one at a time. 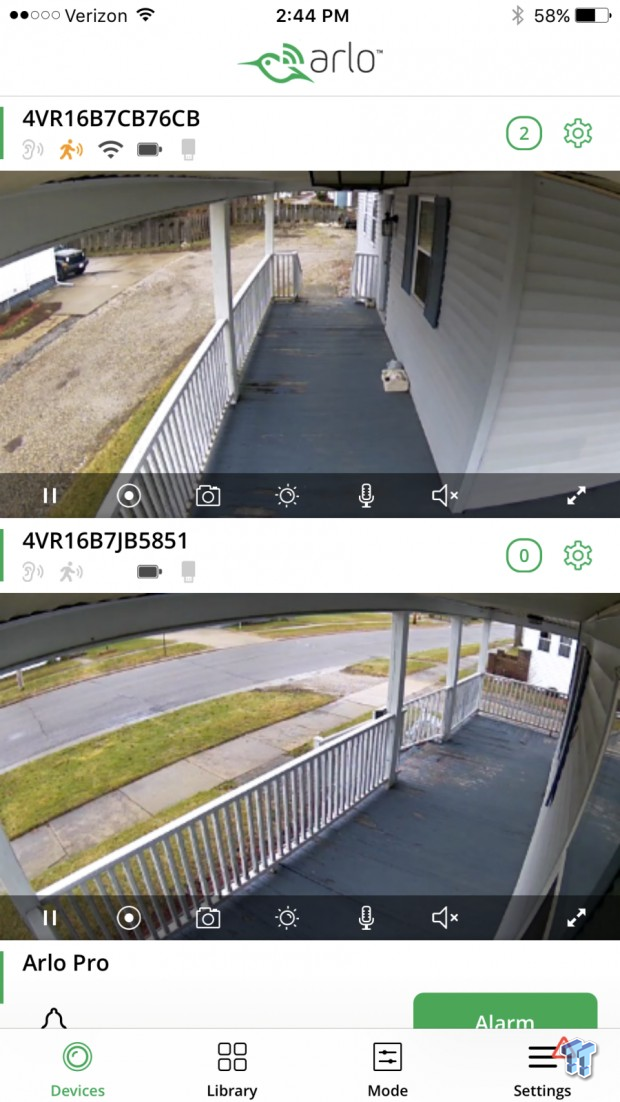 Once complete, you will get a still image of your cameras, which you can take live by tapping on. Above is the daytime image. 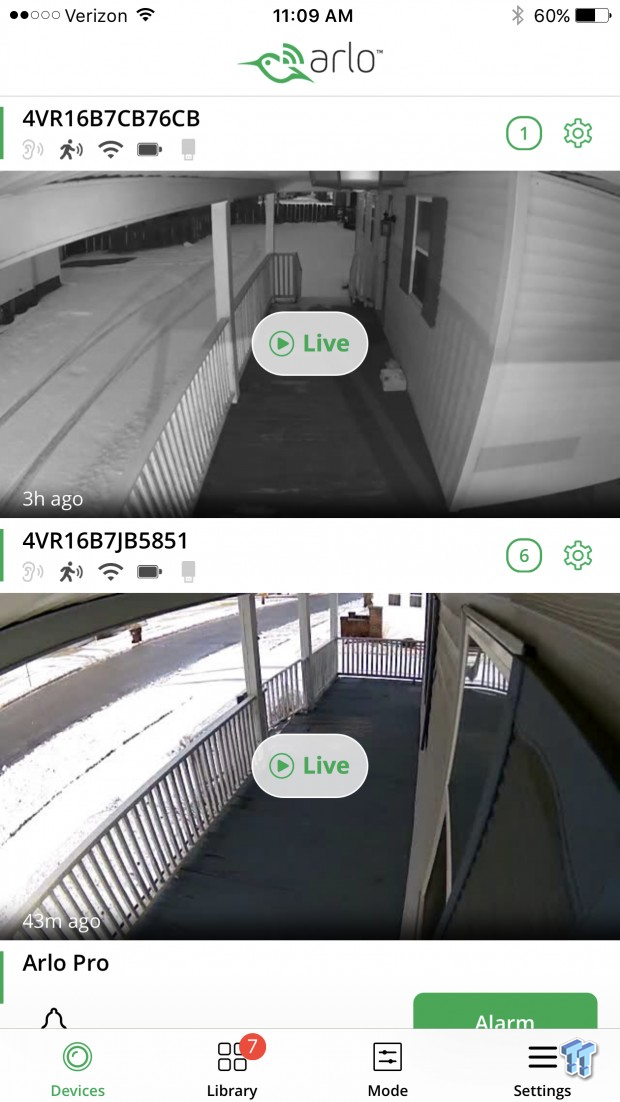 Here we have night time image above with night vision working, and below, a morning image. 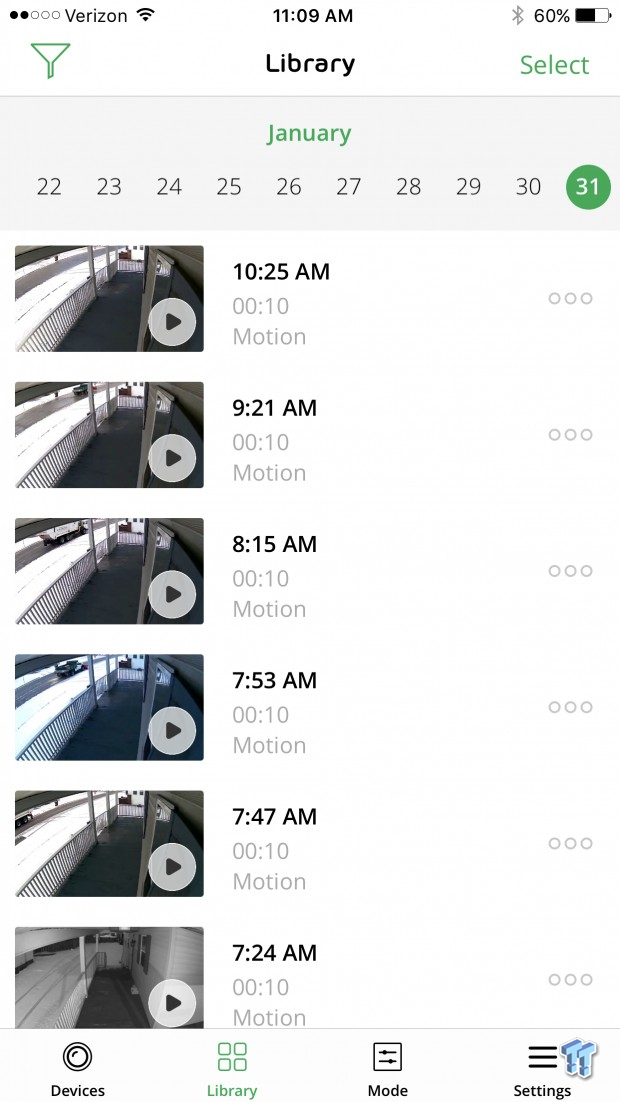 The library gives you the last seven days of recordings at no cost. 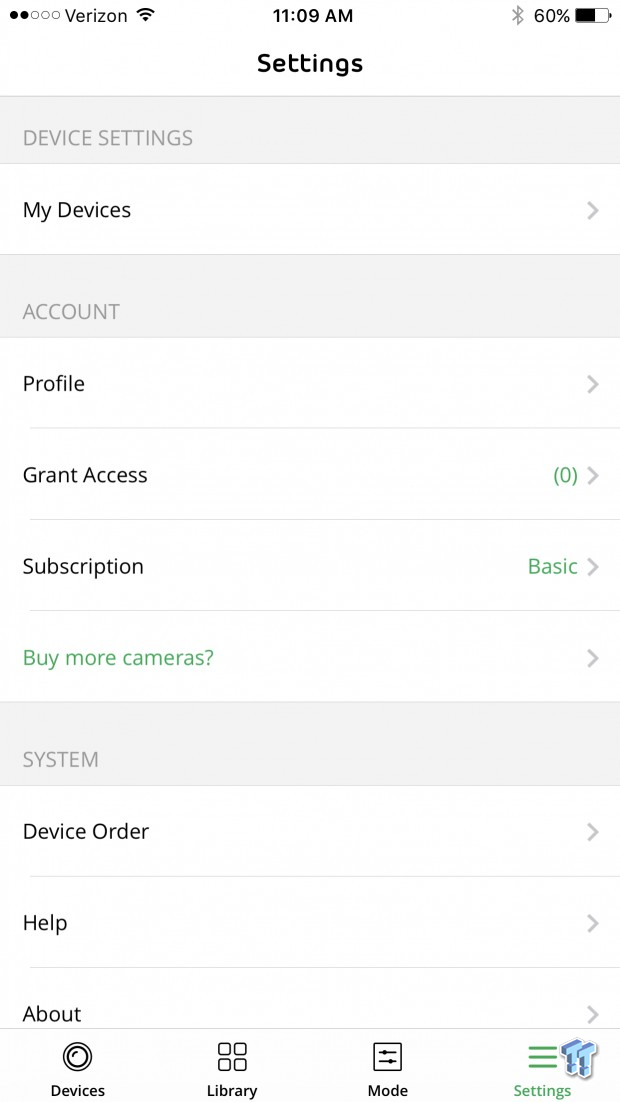 In the settings menu, you have access to your devices at the top including the cameras and base station while moving down the list allows you to grant access to other people that have an Arlo account. You can manage your subscription just below that. 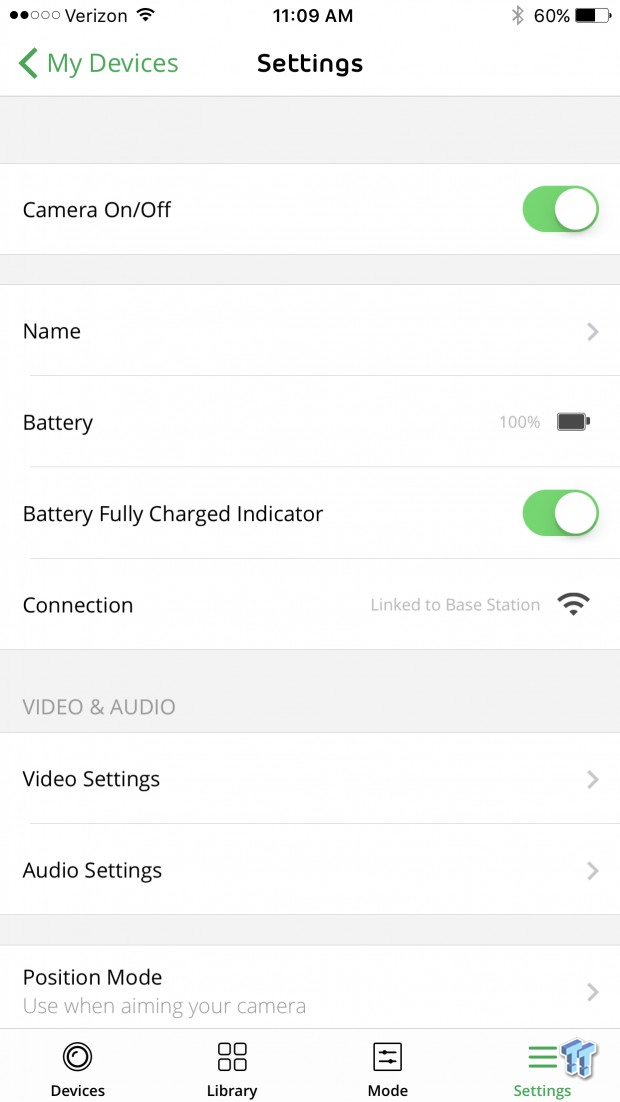 Looking at the camera options, you can rename each camera and check the battery life and its connection to the base station. At the very bottom are the audio and video settings. 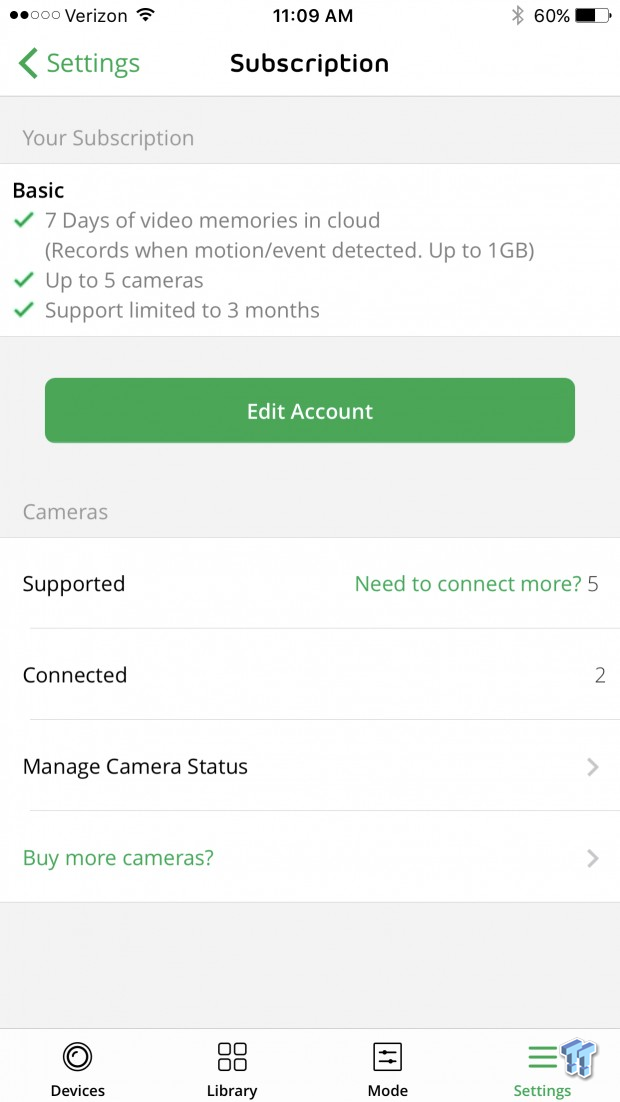 The subscription model for Arlo Pro gives you seven days for five cameras. We like how you can use geofencing to automatically put Arlo Pro into away or home modes depending on where you are (as long as you have your smartphone with you), or you can use schedules to set it manually. We also like that you can manually trigger the siren by just one tap in the app.

Now having used both the original Arlo, Arlo Pro and many multiple camera systems in between, I can say that NETGEAR has something going with its lineup. The build quality of these solutions is very good, the plastics while having a pearl like exterior feel solid. The battery compartment is easy to open, and I had no issues with the included batteries.

Setup took me around 20 to 30 minutes to finish. Camera placement was simple with its magnetic mounts, and I ended placing them both on the porch facing opposite directions. The performance of the cameras at 720p is rather good, the image quality in the still images above can give you an idea of what to expect in day and night. I had very minimal delay watching the cameras on iOS and PC.

With its price tag, I wanted more of an experience when unboxing the cameras making me feel like I bought something elite and expensive rather than a lighter feeling in the wallet. But, with that said, Arlo Pro is a complete kit in a box with very minimal setup time and effort required, and it does its job very well - that's what counts.

The Bottom Line: NETGEAR's Arlo Pro solves several issues from the original model including rechargeable batteries and two-way audio, while adding some nice new touches, but the price tag may bar entry for some.