Seagate's 512GB Game Drive SSD is a worthy solution for those wanting to upgrade their Xbox One storage for much quicker load times at a solid price point.

Seagate since late last year with the Game Drive brand has taken advantage of the lack of upgradeable internal storage for the Xbox One. This gave them the opportunity to create a couple of purpose-built external solutions. As mentioned briefly, the original Game Drive for Xbox went after those wanting more capacity with 2TB and 4TB options, and today they are back with a solution focused on performance.

The Game Drive for Xbox SSD comes in a single 512GB capacity featuring much of the same aesthetics as the Backup Plus line of external solutions. Of course, Seagate has opted to toss a few Xbox logos on this solution to denote its suggested use. For connectivity, this solution takes full advantage of USB 3.0 connectivity offering a micro B connection on the enclosure and performance around the 440 MB/s mark.

As this unit is just a portable SSD with special branding, it is compatible with Windows, OS X, and Linux operating systems, but is ready to go out of the box with the Xbox One console.

The MSRP of the Seagate Game Drive for Xbox SSD in the 512GB capacity comes in at $209.99 with a one-year warranty. 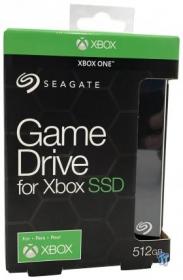 Packaging for the Game Drive SSD carries the right amount of Xbox logos. Down to the right, you will find the capacity with a small window covering the right spine. 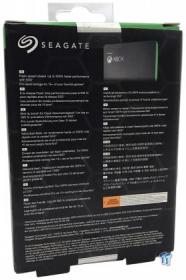 The back carries a few details in several languages. 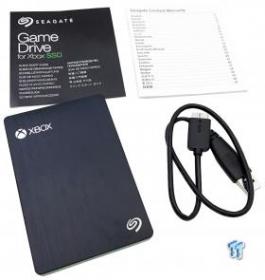 The scope of delivery includes a guide and USB 3.0 cable. 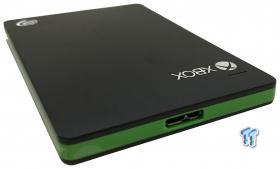 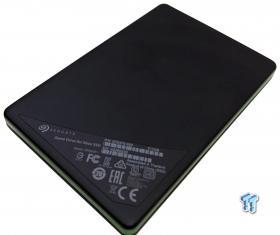 The backside of the drive houses a sticker with regulatory info. 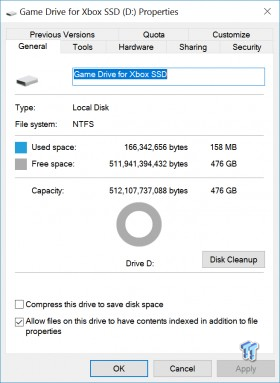 Usable capacity in its factory configuration comes in at 476GB. 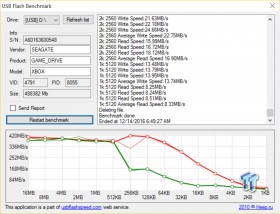 Kicking off the benchmarks, I have a couple of Flash Bench runs above. As you can see, this drive easily reached 420 MB/s read and 410 MB/s write from 16M through 512K. 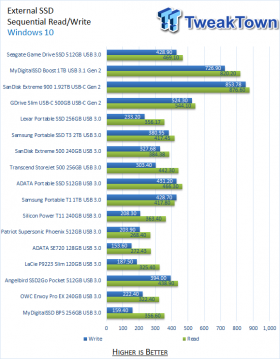 Sequential testing, which has always been done with IOMeter 128K showed the Game Drive capable of 469 MB/s read and 428 MB/s write. 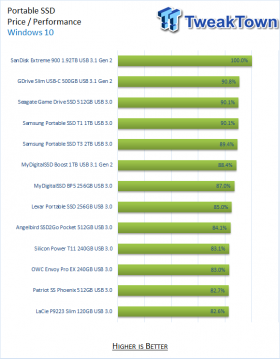 The results above allowed the Game Drive to land near the top of the Price/Performance charts as this drive carries a 41 cent per GB value along with rather decent performance for an external SSD.

I do most of my gaming on Xbox, especially right now with the recent launch of Final Fantasy XV. The Game Drive for Xbox SSD came along at just the right time as RPG games typically have very long load times, at least it always seems that way. In my own testing, going from the load save screen to the game loading, took 1:40.6 with the stock Xbox HDD. With the Game Drive SSD, that time was cut by a substantial amount, down to 24.5 seconds.

With Xbox One not having any form of built-in storage benchmark, we resorted to our Windows 10 machine, where I could reach 420 MB/s read and 410 MB/s write. IOMeter did slightly higher results at 469 MB/s read and 428 MB/s write.

It's hard to say if that's the actual numbers we are seeing with the Xbox One as we don't have a way to verify that, but we can say there is a significant boost reduction in game load times, not only with Final Fantasy but Horizon 3 as well.

To be honest, any portable SSD can be hooked up to the Xbox and used as a Game Drive, but Seagate has made a competitive branded solution that is hard to be without at its current pricing.

The Bottom Line: Seagate's 512GB Game Drive SSD is a worthy solution for those wanting to upgrade their Xbox One storage for much quicker load times at a solid price point.