A smash hit app which spawned a thriving universe of merchandise and elevated a small Finnish company to a net worth of $2.25 billion. It's almost hard to recall a time before the existence of 'Angry Birds' which in fact only launched on iOS in December 2009. But not everything lasts forever, and it's perhaps unfortunate timing that the feature film version has come with the series seemingly in terminal decline - which goes to show how damn long it takes to develop and animate a CG animated feature.

It's even more unfortunate that its video game origins may prove as much of a disadvantage as an advantage for some (justifiably) jaded cinemagoers. That's a real shame, because The Angry Birds Movie is a fun and enjoyable romp in its own right. 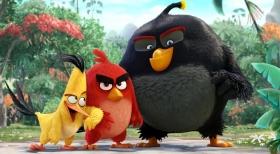 For his diminutive size, Red (Jason Sudeikis) has some significant anger management issues and after one too many mishaps is ordered into a therapy class to learn to chill out. But when the island inhabited by the birds is visited by a seemingly friendly parade of pigs bearing gifts that have somewhat nefarious intent, he'll need to join his friends Chuck (Josh Gad) and Bomb (Danny McBride) and channel his inner anger in order to take back their home. 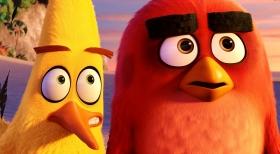 Not that it every truly went away, but there's no doubt that animation has had a resurgence in support over the last few years, which has led to some extremely lucrative box office successes in Zootopia, Frozen, Toy Story 3, Despicable Me 2, and even its spin-offMinions grossing around (or more) than a billion dollars worldwide. Angry Birds clearly won't reach that pantheon, even if it is infinitely better than those last two titles. 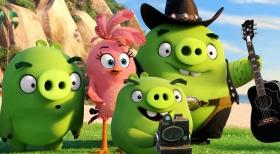 So, how exactly do you make a movie about a puzzle video game, which has no real story to speak of, at the same time as pleasing fans but makes for an enjoyable feature film for the uninitiated? The Angry Birds Movie makes it seem so easy. An extension to the earlier Angry Birds Toons online shorts, the film has almost total carte blanche to establish a universe within the rules of what's come before it, all the while paying homage to its origins by way of the litany of visual references and gags littered throughout its run time.

The entire third act is basically the video game come to life in non-interactive form, as the birds take revenge on the pigs with some genuinely funny sight gags and knowing winks to the audience. While Angry Birds is undoubtedly a kids film with more than its fair share of juvenile jokes, I was a little surprised how many adult-friendly jokes were peppered throughout for the benefit of moms and dads. 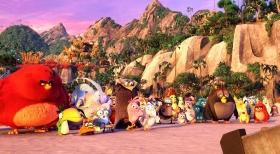 No doubt a huge part of the film's success can be pinpointed on the very strong lineup of comedic talents in Jason Sudeikis, Josh Gad, Danny McBride, Maya Rudolph, and Bill Hader, not to mention a suitably weird extended cameo from Sean Penn. While I generally rail against animated films for relying too heavily on big-name casting, it's entirely appropriate for a pop culture extravaganza and serves as strength, rather than a distraction. Special mention has to go out to Rovio's in-house animation studio (assisted by Sony Pictures Imageworks) for the superb CG imagery which will no doubt be a great demonstration of 4K technologies once the film is released on home video formats in the coming months.

So, what's next for Rovio? After shedding hundreds of staff and canceling projects, does The Angry Birds Movie have enough strength to revitalize the franchise and the company itself? That, of course, remains to be seen, but it seems there's still some life in the old birds yet, as well as an audience to lap it up. 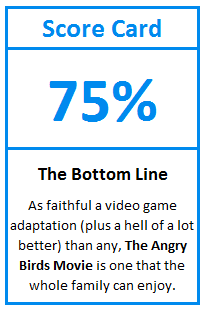