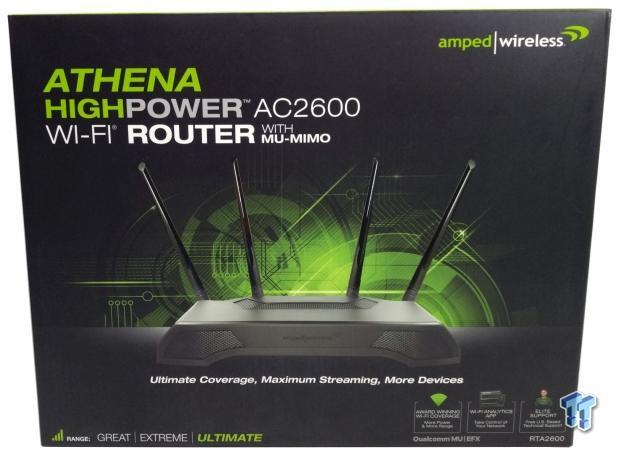 It has been quite a while since we last had a product from Amped in the lab, but today we end that with the Athena. The Athena is an AC2600 wireless solution based on the Qualcomm platform.

While the early days of 802.11ac produced a top-end AC1900 specification, it did not take long for vendors to move past that and create tri-band solutions reaching all the way up to AC5300. At this point, I see AC1900 as the mainstream solution for most homes and AC2600 has filled in the gap between this mainstream functionality and the over the top "spaceship" routers like the ASUS RT5300 and Netgear X8. 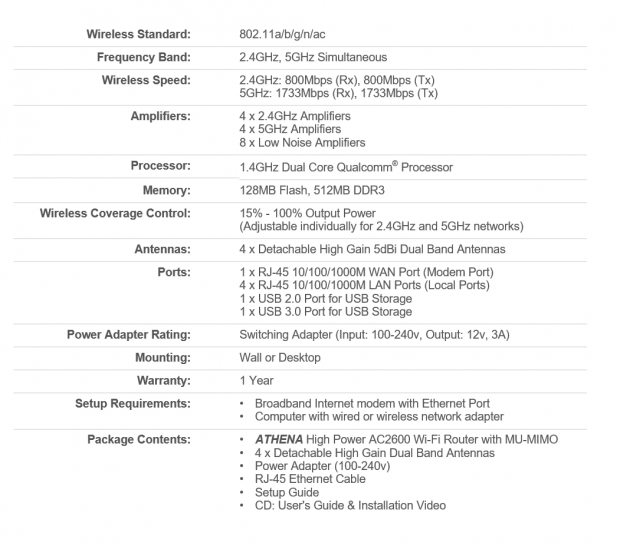 If we look at the specifications of this solution, we very quickly find it powered by a dual-core Qualcomm CPU operating at 1.4GHz. This is a MU-MIMO solution as many AC2600 solutions are so we have the CPU paired with 128MB flash, the Athena is quite similar to most AC2600 solutions, what differs here is Amped has launched this router with 512MB of DDR3, more than I have seen on any other platform. The wireless side of things has each band with four high power amplifiers with an additional eight low noise amps. Output power is adjustable on this platform, and the antennas are detachable. On the backside, you will find four gigabit LAN ports and a single gigabit WAN along with USB 2.0 and USB 3.0.

Product packaging includes an image of the router centered while the bottom makes note of the ME EFX platform. 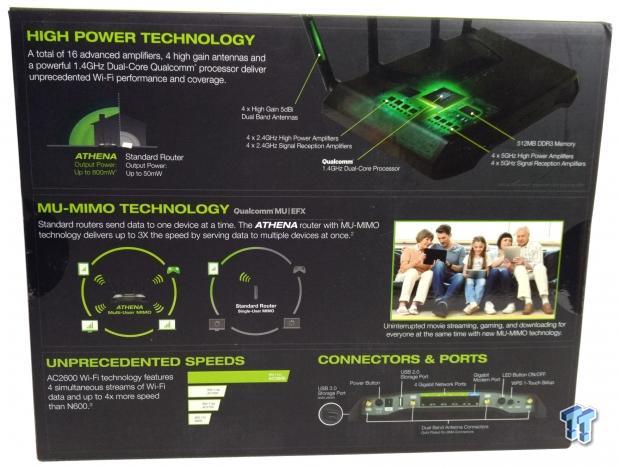 Marketing is ramped up with many features outlined on the back. 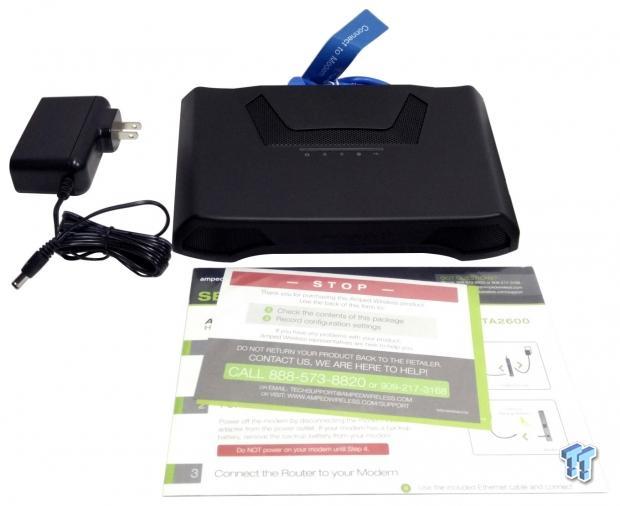 The scope of delivery for the Athena includes reading material at the bottom, antennas to the right and power adapter to the left.

The front of the router has a simple Amped logo embossed into the plastic.

The back of the router houses the antenna connectors, next to the power switch and button. Moving down the line, we have a secondary USB port for printers along with four gigabit LAN and the WAN port. To the far right, Amped has an LED switch next to the WPS and reset buttons. 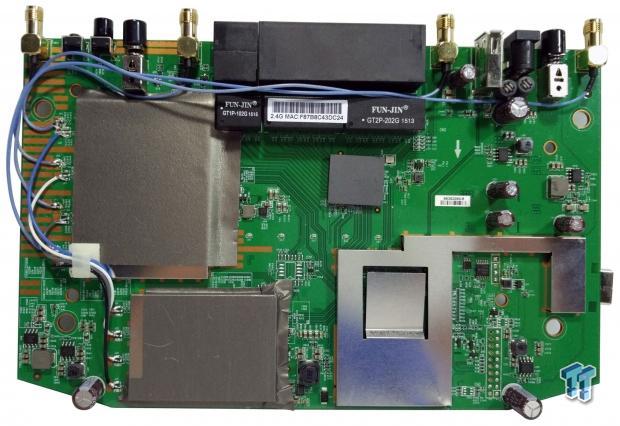 Opening up the Athena, I was quite surprised to see all of the shielding is soldered into place. 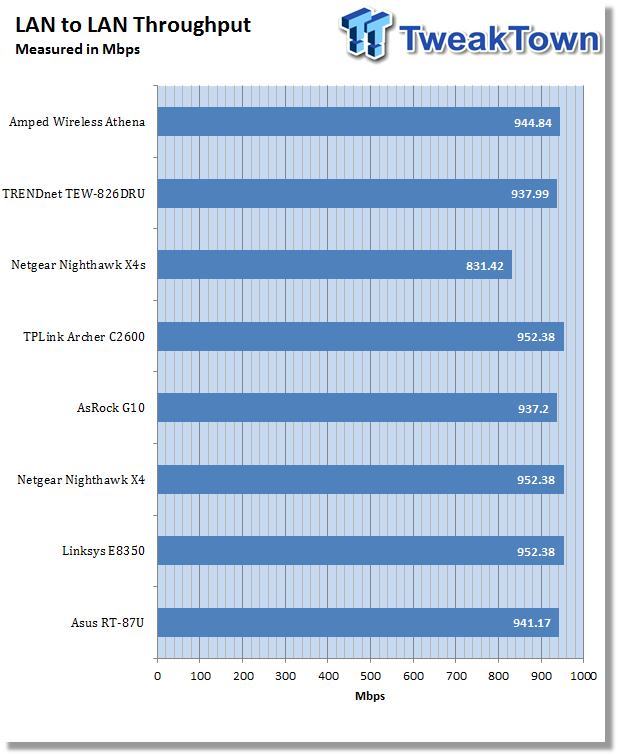 Knowing that this is a Qualcomm AC2600 platform, we can compare this solution other with similar specs. In our LAN throughput testing, the Athena was able to push 944 Mbps, right in line with expectations. 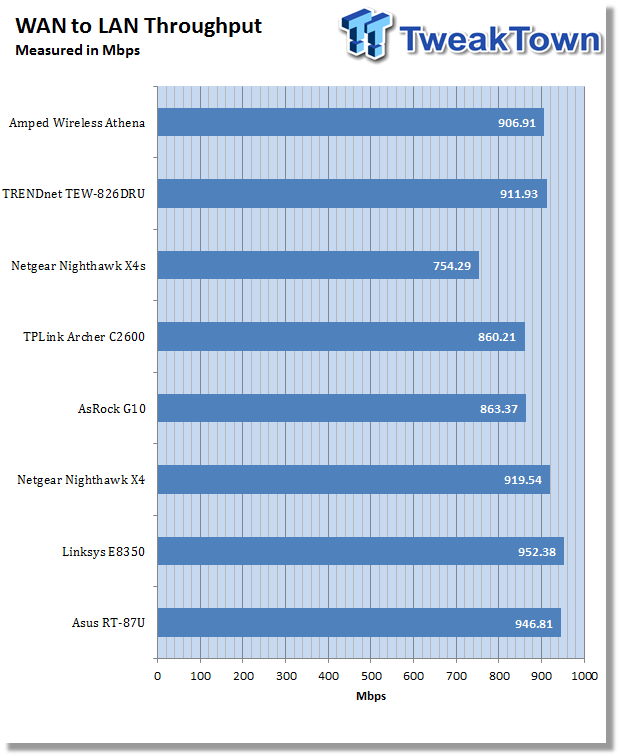 WAN to LAN came in at 906 Mbps, just a touch slower than the TRENDnet device we tested last month. 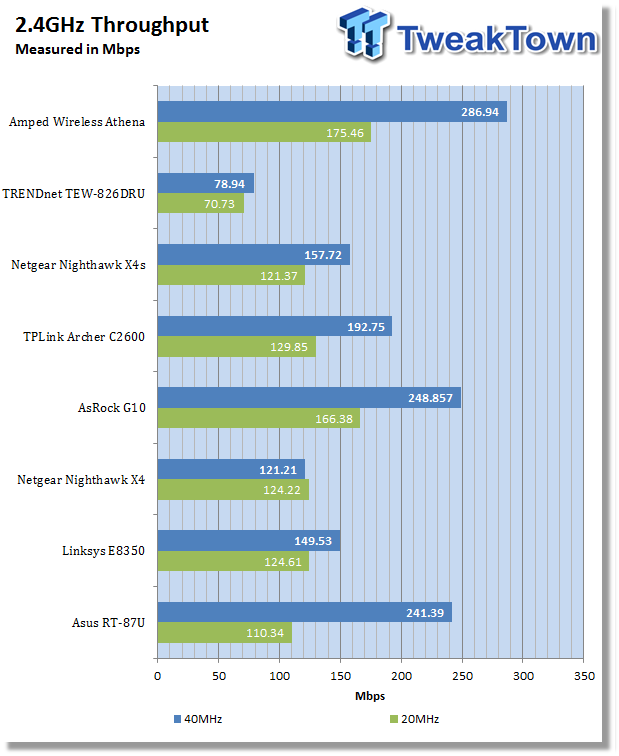 Moving to wireless throughput, the Amped device was one of the very few solutions that allow you to manually change the bands between 20 and 40MHz. With that, we had more control over testing and were able to reach 175 Mbps on the 20MHz band and 286 Mbps on the 40MHz band. 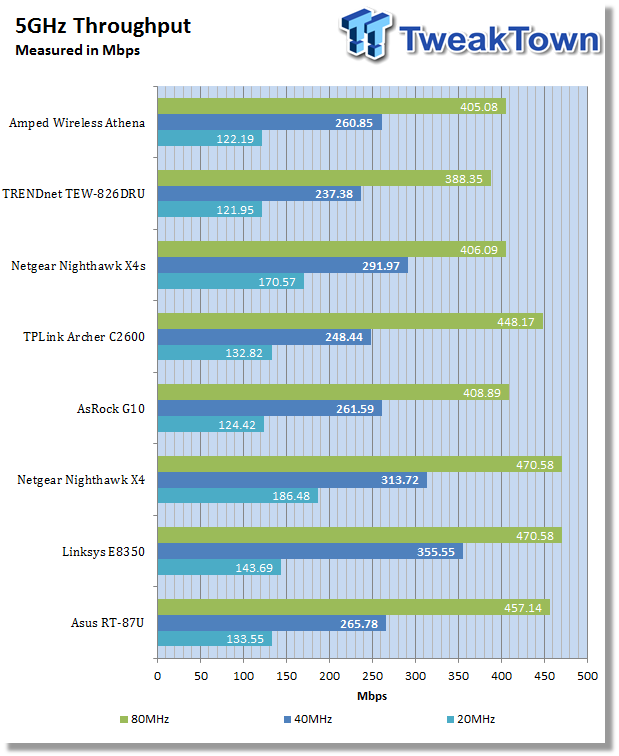 Switching over to the 5GHz band, the Athena device did quite well, producing a peak throughput of 405 Mbps followed up by 260 Mbps on the 40MHz band and 122 Mbps on the 20MHz band.

When testing throughput over three devices with the 2.4GHz band, results, as you can see above, were hit and miss. As you can see, we have two devices (red and green) that are sharing the same performance while the purple device trails off.

Moving over to 5GHz, we can see MU-MIMO working fully with all three of our devices following the same throughput curve for the entire duration. 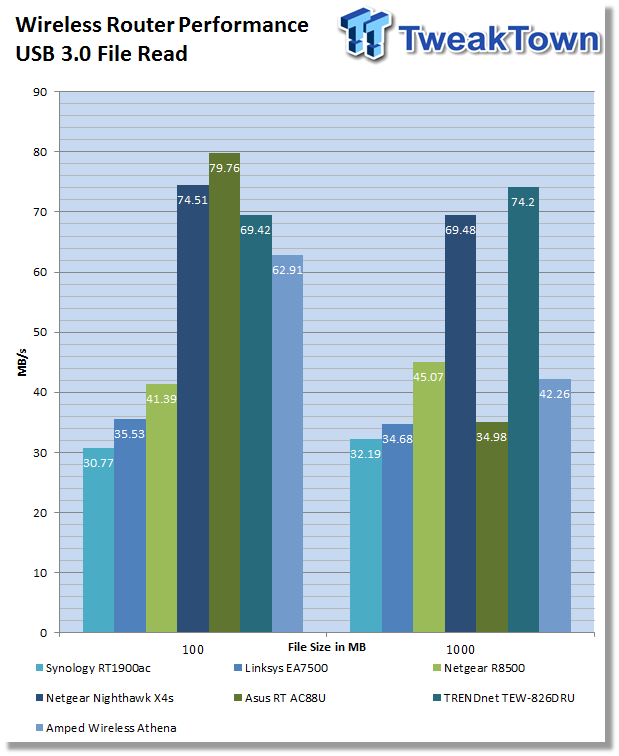 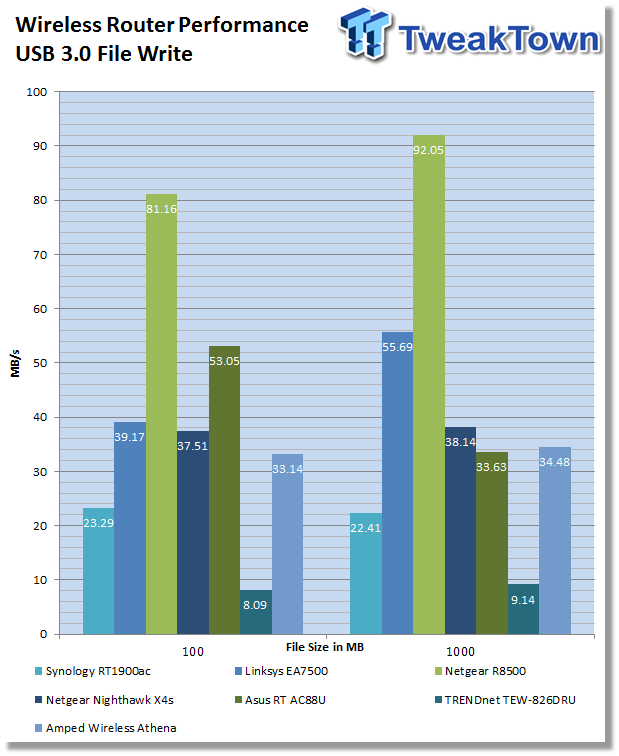 As you can see I, managed 62 MB/s read which is only 17 MB/s behind the quickest of routers. Write performance, on the other hand, was around 35 MB/s, which is not the greatest but still somewhat respectable.

Amped Wireless is one of the less active vendors in the wireless market, instead of saturating the market with a solution to fit every need, they have seemingly planned, very carefully, the devices they launch. Our last run in with an Amped router was back when the RTA15 launch, at the onset of 802.11ac hitting the market. Since then, Amped has done quite well for themselves and the Athena speaks for that. The build quality of this solution is superb, and while they did interrupt my normal routine by soldering all the shielding internally, we can safely assume this is the same platform as the ASRock G10 and many others.

Performance is solid across the board and with the firmware allowing both power control and band control, consumers will be able to tweak their networks and fine-tune them for their needs. In our LAN throughput, this solution put out 944 Mbps while WAN delivered 906 Mbps.

Wireless throughput for both bands was quite good with 2.4GHz peaking at 286 Mbps on the 40MHz band and 5GHz topping at 405 Mbps on the 80MHz band. Multi-user performance was decent for two devices on the 2.4GHz band, but performed admirably when switching over to 5GHz, as all three of our devices maintained the same 130 Mbps.

The Athena has a lot going for it, with the Qualcomm platform offering solid performance. On the other side, it does have a bit more cost associated with it, and the warranty should be extended to meet up with competing solutions.

The Bottom Line: The Athena is a solid platform from Amped producing top notch wired and wireless performance. Adding to this it also has some of the best storage performance across AC2600 solutions.