It has been quite a long time since I have seen a storage solution from SilverStone. If I think back, I believe the TS431S RAID enclosure was our last look at which would put us over a year ago. At any rate, SilverStone is back with a small form factor solution, the DS222.

The DS222, takes from the DS221, which was also a dual 2.5-inch drive solution. This time around instead of the drives sitting vertically in the enclosure, they are horizontal. Adding to that this enclosure is a tool-less design while supporting a few RAID modes including 0, 1, BIG, and JBOD. There are no real performance numbers claimed, but what we do know is this enclosure is powered by the JMicron 561 controller using a USB 3.0 interface while adding to it is an additional power plug if you ever need it while using HDDs that require more power to get moving.

Compatibility of this enclosure includes Windows 7+, OS X 10.5+, and Linux. MSRP of the SilverStone DS222 comes in at $59.99 with a one-year warranty. 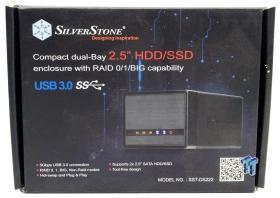 The DS222 has attractive packaging with the enclosure in the center. Across the top, we have in large print USB 3.0 along with its HDD and SSD compatibility. 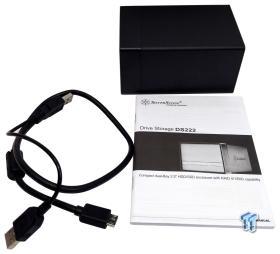 The scope of delivery is quite simple and includes a split type USB 3.0 cable adding in extra power by using two host ports. 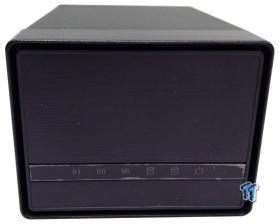 The front of the enclosure houses the lid which carries a set of six LEDs. 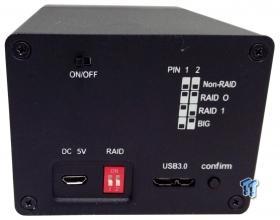 On the back of the unit, we have a power switch up top with the USB 3.0 connection at the bottom. Over to the left is the DIP switch selection while the diagram for each mode is to the right. Of note here is that the DIP switches are actually upside down if compared to the diagram, so everything is in reverse of what you see to the left. 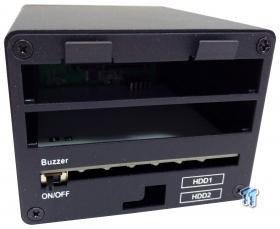 To the left in the image above, you can disarm the buzzer, while above you have the two tool-less drive slots. 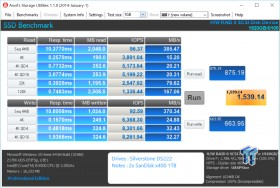 I was going to throw all of this data into a chart but instead decided to give you the raw numbers since we haven't seen too many SFF RAID enclosures like the DS222. As you can see in our testing, I used two 1TB SSDs. In RAID 0, the enclosure was able to reach 385 MB/s read and 370 MB/s write. 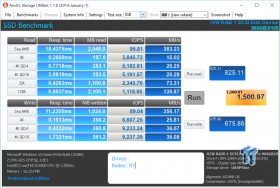 Looking at RAID 1 numbers, we find write performance dropping only slightly to 356 MB/s write while read performance stayed near the 385 MB/s peak that we saw in RAID 0. 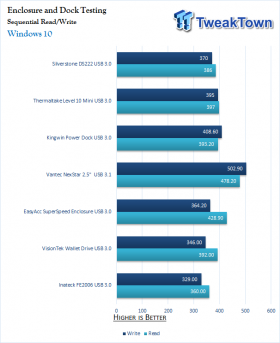 Tossing in a chart for good measure, this shows the performance comparison of the DS222 in RAID 0 to most single disk enclosures we have tested.

The DS222 from SilverStone is a nice little enclosure, but I wouldn't call it SilverStone quality. In the past, my experience has been with many of their 3.5-inch solutions and those were always tanks built with high-quality parts. The DS222 just seems like a lot of corners were cut with its plastic front panel and upside down DIP switches. I expect more from a brand like SilverStone.

On the performance side of things, I was able to reach near 385 MB/s read in both RAID 0 and 1 while write performance topped 370 MB/s in RAID 0 and 356 MB/s in RAID 1. That being said, most of our single drive enclosure are capable of this performance, so I was expecting a little more in this area as well at the same time realizing this is using a USB 3.0 controller.

Overall, the SilverStone DS222 is what it is, a small form factor RAID enclosure with solid enough performance for HDD use while leaving me wanting more regarding quality and feel.

The Bottom Line: SilverStone's DS222 is a capable small form factor storage enclosure for consumers wanting to RAID some leftover 2.5-inch HDDs, but it doesn't offer anything remarkable.