The Apple iOS flash drive or Lightning drive has really begun to catch on. Evidence of this lies in the many devices that now flood into online retailers and even your local shops. With iOS supporting external storage as does Android, these third-party storage solutions enable consumers to save money by purchasing lower capacity devices and adding storage later on if it's needed.

While many of these storage options are bulky, to say the least, Team Group is using their latest storage solution as a dual purpose device. The MoStash, as they are calling it, is an iOS capable flash drive, coming in capacities ranging from 16GB to 128GB. Connectivity, as you guessed, is via USB 3.0 and the reversible Apple Lightning connector. Marketing performance for the MoStash is said to be near 70 MB/s read and 30 MB/s write, while compatibility extends to Windows 7 and later along with OS X 10.6+.

As of this writing, I had no solid word from Team Group in regards to the MSRP of the 16GB MoStash. However, in looking around the internet, it appears many retailers are going live with this device priced at $109.99. Warranty is listed at two-years. 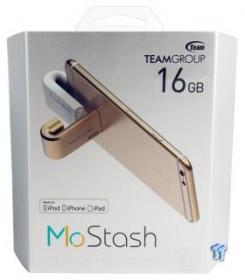 The MoStash has very attractive packaging. The top shows the capacity, ours at 16GB, while the image shows a basic image of how the drive turns into an iPhone stand. 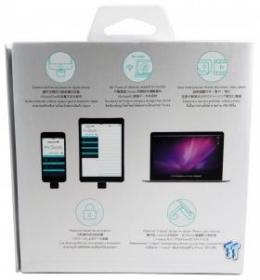 On the backside, Team Group has listed some features of the drive in several languages. 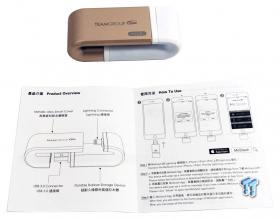 As you can see, the drive does carry a unique shape when closed. Ours being the gold model, I found that it does match up quite well to the gold Apple uses in their devices. On the top of the device, there is little branding with capacity in the bottom right. 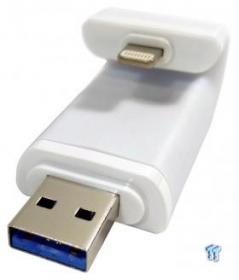 Above, we have both the USB 3.0 and Lightning connections. 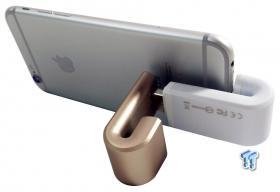 I set up the MoStash according to the directions that came with it and did notice while the images on their site show a flush connection between the back of the iPhone and stand, I wasn't able to achieve this with my sample. This lead to above normal stress on the Lightning connector which could, over time, weaken both the male and female sides of the connector. 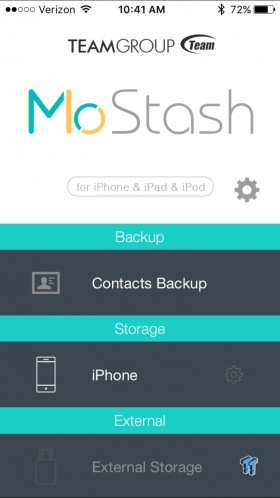 The app for the MoStash is pretty basic. At the top, you have contacts backup with the ability to check the iPhone storage and external storage below. 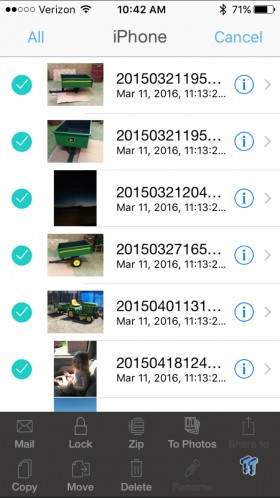 The application allows you to move photos and videos in batches. You can also create zips and lock files if needed. 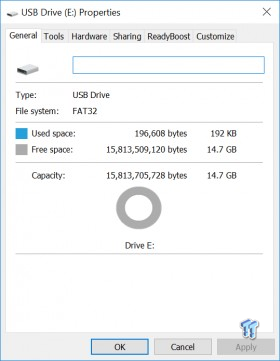 The Team Group MoStash is factory formatted with the FAT32 file system, ensuring compatibility between Windows and Macintosh computers. The usable capacity after formatting is 14.7GB. 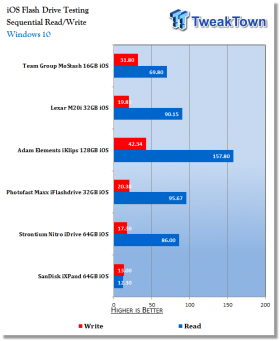 Running the MoStash through a few of our standard storage test, I found it to reach 69 MB/s read and 31 MB/s write. This was nearly dead on with marketing performance, which is a definite plus. 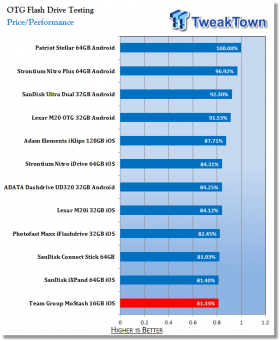 The MoStash is a rather unlucky device when it comes to price/performance. Basing the pricing off the $109.99 I found around the internet, this drive is effectively near $7 per GB, and as you can imagine with its performance not being much better than competing solutions, it takes the bottom spot in our OTG drive chart.

The MoStash is a unique drive, and I really do like the thought that Team Group had here of making it a dual-purpose solution. But, I don't think the execution was at 100%. While having great build quality, we spotted a few downfalls including not being flush with my iPhone, which then puts more stress on the Lightning connector. And while I don't think the connector would break even with the weight of the drive, if it did happen to break, you can imagine the mess it would cause.

The performance of the MoStash was average at best for iOS drives at 69 MB/s read and 31 MB/s write, but what really hurts this solution is the price. If this drive is indeed launched at $109.99 for a 16GB solution, it will make it the highest priced iOS solution per GB and that's saying something when you have vendors like Lexar and SanDisk that charge a premium for their name on the drive.

Overall, the MoStash is a well-built solution with a good idea behind it, but at this point, unless you need a kickstand for your iPhone, there are many better solutions on the market to overpay for this one.

The Bottom Line: The MoStash from Team Group is a average performing drive with a lot of good design behind it. I just feel like at this point in the game the price is just too high for consumers to consider as a viable option.