We have a great variety of mobile power banks from Innovative Technology in the form of the Justin range of chargers. There's a model here for everyone!

I've got to admit, I receive more mobile batteries than most people and while I love it, there are just so many of them out there now. It's so hard to be different in this world of products that all want to provide the same thing; portable batteries, but there are some out there that shift away from the norm - like Innovative Technology and its Justin line of batteries. 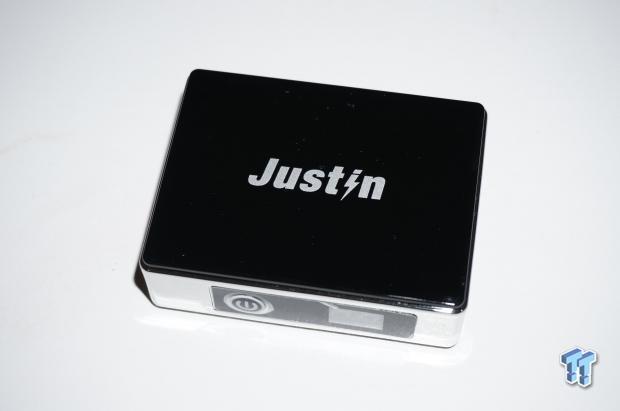 At first, I thought Justin was an actual name - like Justin Timberlake, but then you see the logo of Just - with a lightning bolt in the middle - In - aha, it all makes sense. Just, In. Innovative Technology make a slew of mobile batteries, ranging from as small as 3000mAh right up to a beast with 12,000mAh and everything in between.

Starting with the 5200mAh Power Bank with LCD display, which kind of explains itself - we have a 5200mAh battery with a built-in LCD display which looks glorious in person. The LCD is super bright, with 5V/1A input and output.

The next charger ramps things up a bit, offering 5200mAh of battery, while offering up a Lightning cable, and micro USB cable. This battery has 5V/2.1A of output, which is what you want for fast-charging your device.

The 6000mAh Power Bank with built-in stand is one of the more interesting chargers in the Justin range, offering a decent sized battery with 5V/1A input, and 5V/2.1A output. On top of that, we have a great stand that allows you to watch videos on your tablet or smartphone while it's charging. It also doubles as a great night stand next to your bed, or on your computer desk.

The final battery we have on our review table today is the much bigger 10,000mAh Power Bank, which offers two USB outputs - one of which is 1A out, while the other is 2.1A. The big draw card here is obviously the huge 10,000mAh battery - which will last days and days of charging your device up every night.

As for prices, we have:

Let's take a look around all of these Justin batteries! 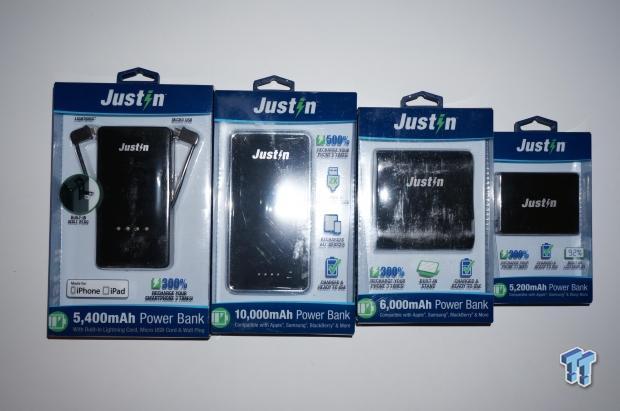 The front of the packages are nice - giving you all the details you need. 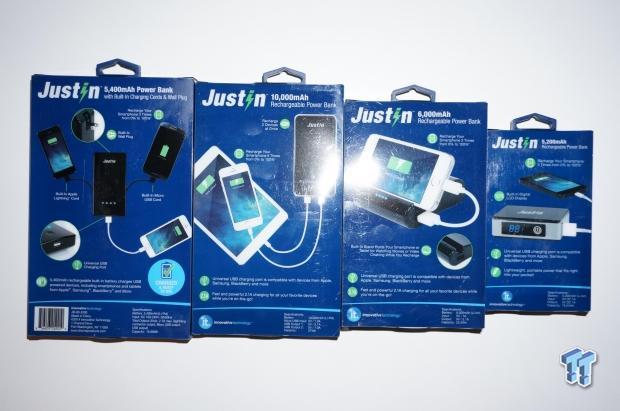 The same can be said for the back of the packages, with some nice shots of the various features of the Justin batteries. 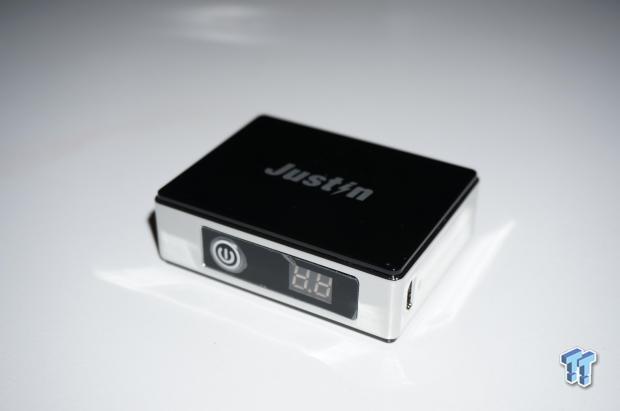 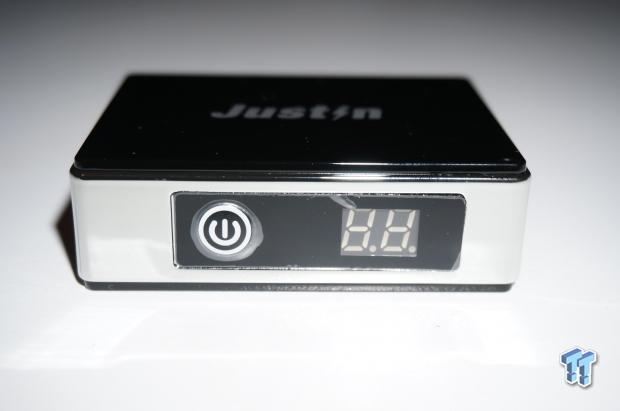 This is the 5200mAh model with its built-in display. 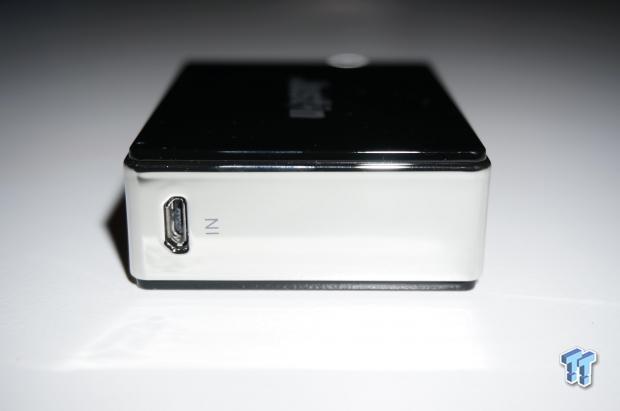 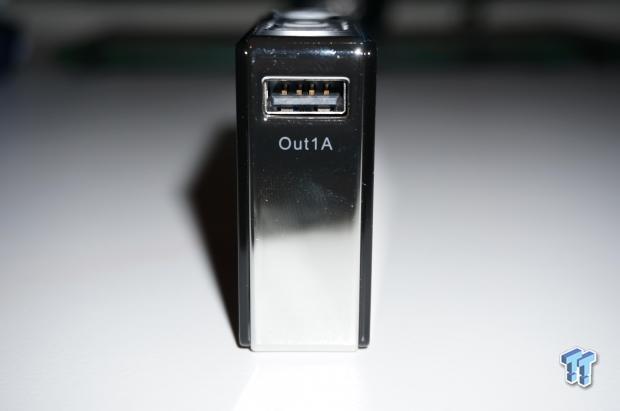 On one side of the charger we have the micro USB input, and on the other the 5V/1A output. 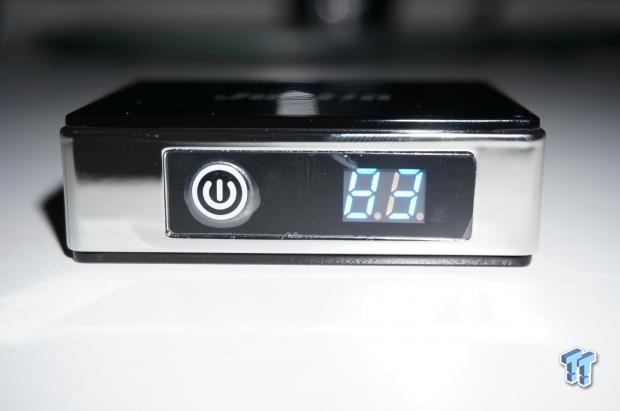 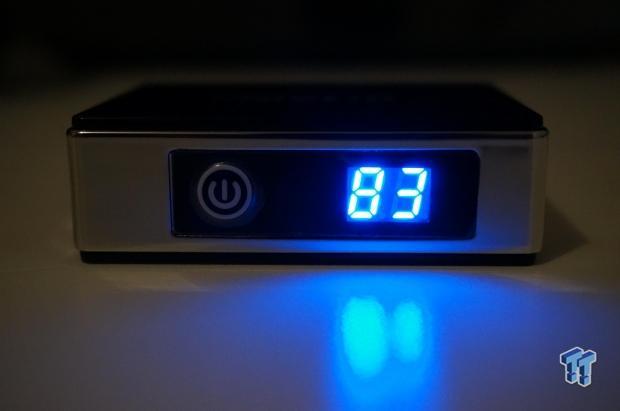 This is the built-in display from its front, and then again with the lights off to see the beautiful blue LEDs being shown off.

This is the second-most unique battery we have here, with the 5400mAh model featuring a built-in wall plug and two cables: one Lightning cable for compatible Apple iDevices, and a built-in micro USB cable for everything else. 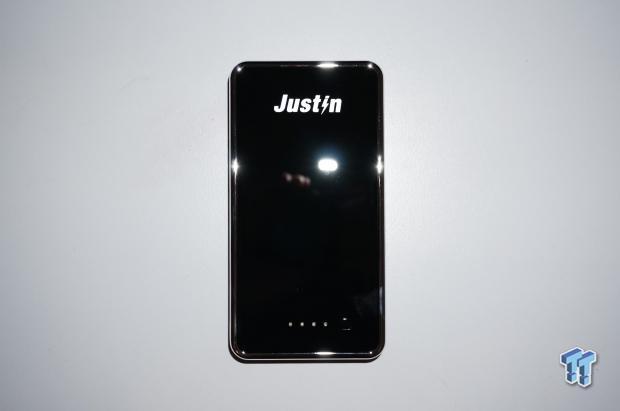 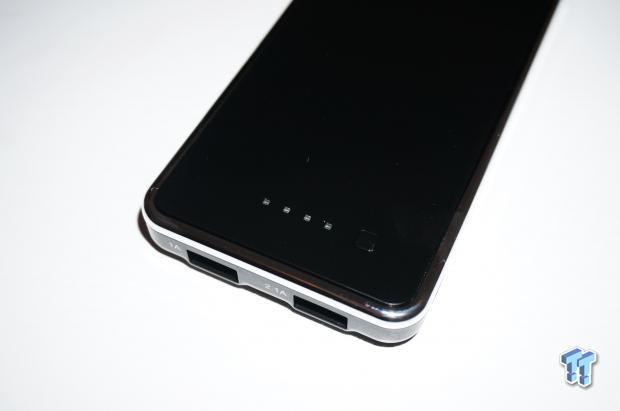 On the left, we have the battery and its four LEDs and the power button, while on the right we have a closer shot. 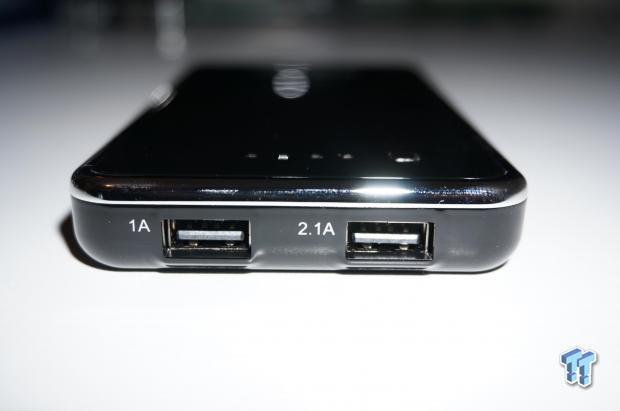 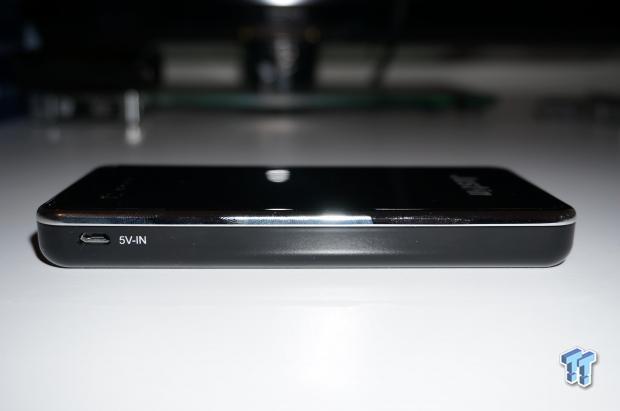 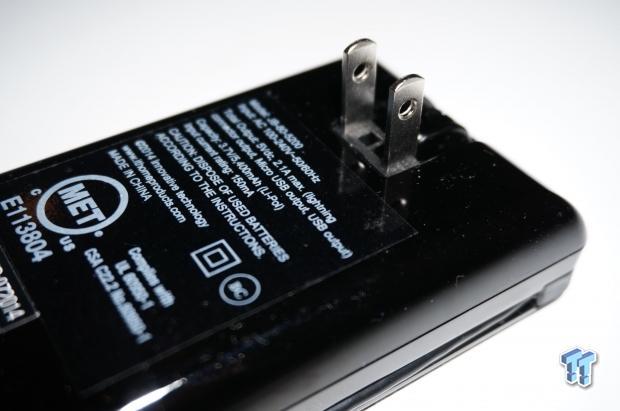 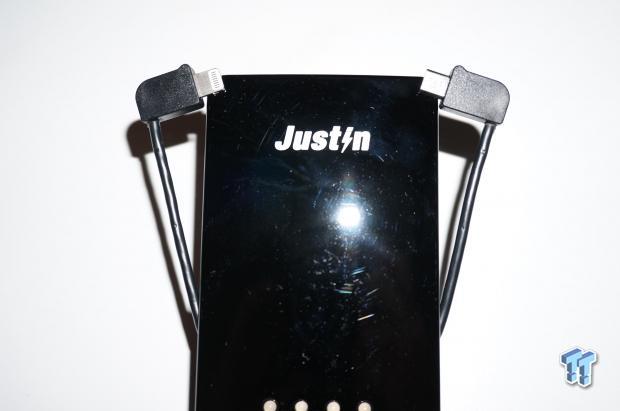 On the left we have that built-in wall plug which is really super handy, while on the right we have the built-in Lightning and micro USB cables. 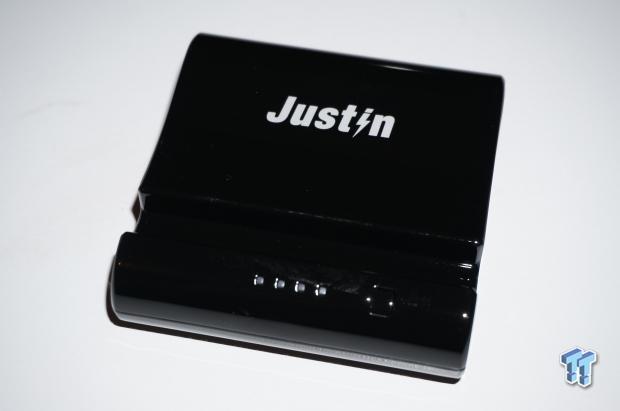 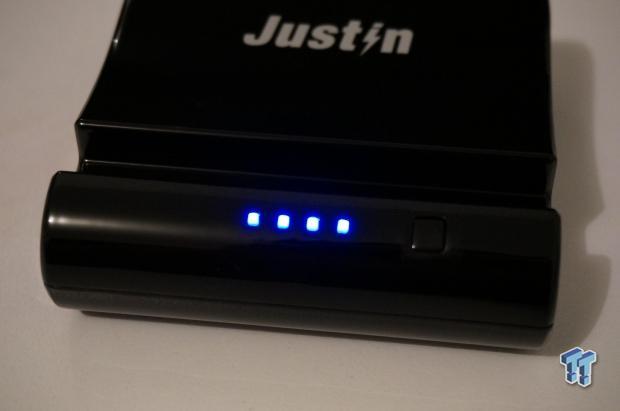 Here we have the 6000mAh model with the built-in stand. We can see its four LEDs not lit up on the left, and again in the dark showing off the LEDs on the right. 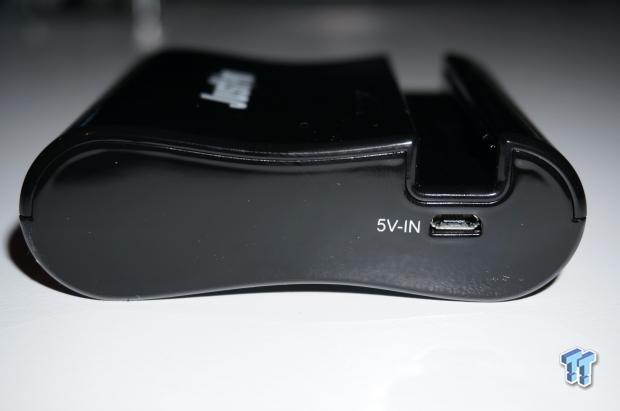 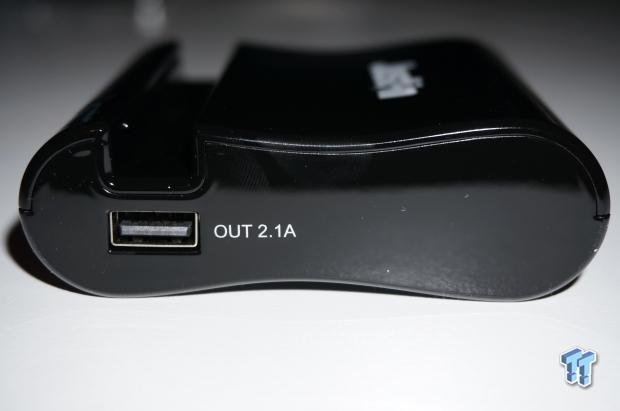 On the left, we have the micro USB input while on the right we have the 2.1A capable output. 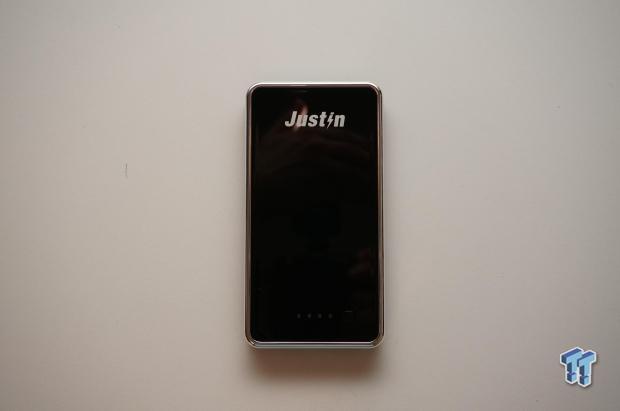 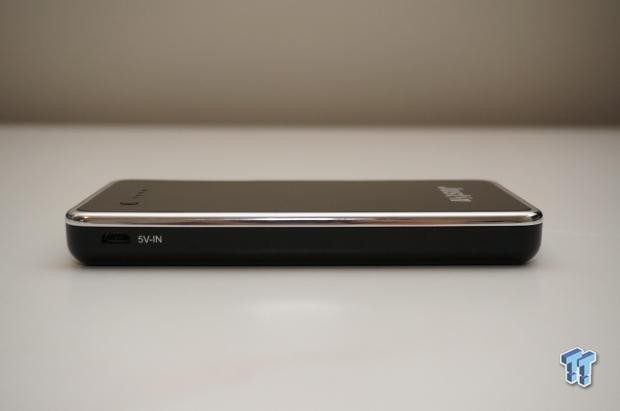 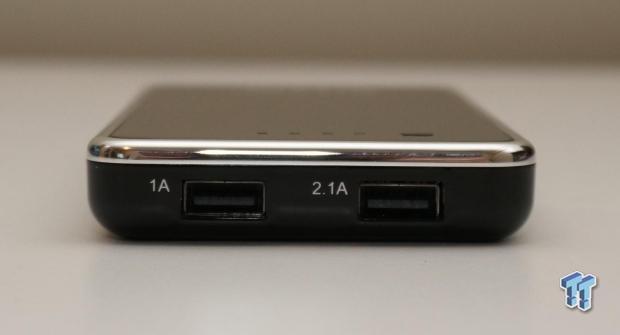 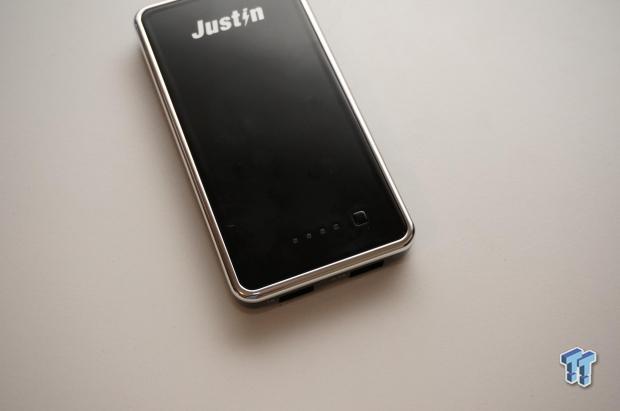 On the left we have the two USB outputs; one 1A and one 2.1A while we have another shot of the battery itself.

I used the Justin Power Bank's in a variety of different ways, with one in my office, another in my lounge room making sure that my daughter's tablet was charged, the one with the built-in dock in my bedroom and finally, the 10,000mAh model in my car.

This provided me with portable charge in every situation possible, but each with their unique abilities being utilized to their total extent. The 10,000mAh model was great for the car as it lasted for close to two weeks on standby and still provided multiple charges for my Sony Xperia Z2 smartphone, for example.

The 6000mAh model was a great bedside charger, as I was able to dock my phone and plug it into charge, all the while I could use it as a nightstand. This was one of the better uses from the Justine line up of chargers, as I could use it as an alarm clock/notification device.

The 5400mAh model was another nice touch with the built-in micro USB cable, and a backup for my iDevice friends when they came over with its built-in Lightning cable. This left the 5200mAh model with its built-in LCD display coming in handy for travelling. I took this with me away for the night and it provided enough juice to top up both my Sony smartphone and tablet, perfect.

For those who want to sum up the entire review in a few points, the What's Hot and What's Not part of my review will help you. Skip right to this bit if you want a quick read, or if you want to find out what I found to be the most notable parts of the Justin chargers, we're going to jump into that right now.

A Large Variety: You have so many chargers to choose from, with countless combinations of features, amount of mAh, and much more. It's great to see Innovative Technology going the extra mile here and not just making a 5000mAh model of the 2000mAh model, and then a bigger 10,000 model of the 5000 model, and so on.

Great Features: This is another nice touch from the company, is that the chargers aren't the same. Some have built-in LCD displays, while others have built-in micro USB and Lightning cables.

So Many Choices!: This really isn't a negative, but after years of working IT retail, providing consumers with this many choices can also sometimes be confusing. That's not to say everyone will be confused over the offerings here from Innovative Technology, but some people will.

If you're in the market for a new portable battery, Innovative Technology has at least a handful you should like. Ranging from small portable ones that will fit in your pocket, to much bigger models that will see you through the entire week with a topped-up battery.

There are some great batteries here, but out of the four we reviewed, I would have to pick two. I really enjoyed the 6000mAh model with the built-in stand, as it sat next to my bed and provided me with a nice stand to lay my smartphone on at night.

The other one that I really enjoyed was the 5400mAh model, as it had built-in cables, which is something I'm a big fan of. Built-in cables save so much time and effort of packing a cable, remembering where you put it, having to plug it into the charger, and then into your device. Having it right there is just so easy.

So there you have it, Innovative Technology has their Justin line up of Power Bank's ready for you - go out and try them out!

The Bottom Line: We have a great variety of mobile power banks from Innovative Technology in the form of the Justin range of chargers. There's a model here for everyone!