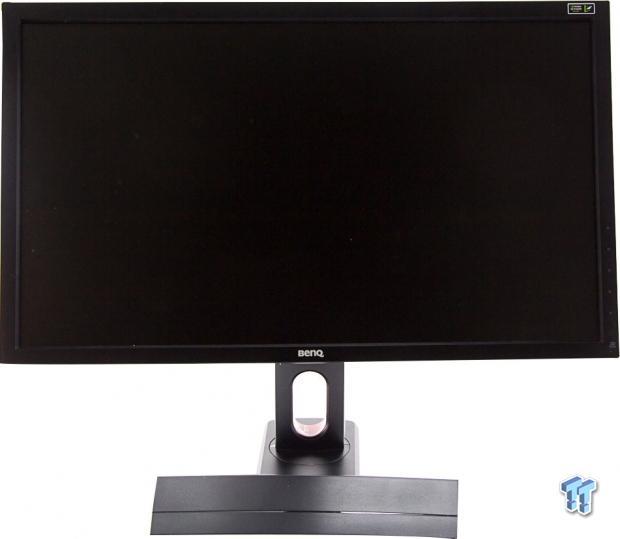 We've got our first-ever BenQ monitor in the lab for review. BenQ provides quite a few different models of displays, with something available for almost everyone. As gamers, we're particularly interested in what they offer.

A quick look on their website shows a total of eight displays as categorized for gaming. We have the XL2720Z in for review today, but they offer monitors in a variety of sizes and prices. The XL2720Z is one of their top models, featuring a 27-inch LED panel and 144Hz refresh rate, but we'll get into those details in a moment.

We'll be most interested to see how the XL2720Z compares to the AOC G2460PQU, another 144Hz gamer-oriented monitor. The G2460PQU is a 24-inch panel, but both monitors provide the same Full HD resolution. But enough with that, let's move to the specs of today's review sample.

The XL2720Z comes with a few key features, but we'll cover the basics first. We've already stated that this is a 27-inch LED panel that features Full HD (1080p resolution). We also covered the refresh rate, which clocks in at 144Hz.

The panel is a TN-type panel, so color reproduction is going to be less accurate than competing IPS monitors, though IPS monitors have trouble reaching faster refresh rates. BenQ says the panel consumes 27W, but we found it to be a bit lower; we'll discuss this on our test results page.

The stand features the standard tilt adjustments. Unlike a lot of monitors, the stand also features height adjustment, rotation, and swivel; all are nice features to have in a monitor stand. The monitor features numerous inputs. On board, we have a D-sub port, a DVI-DL port, two HDMI ports, and a DisplayPort 1.2 port.

BenQ has added quite a number of special features to this gaming monitor, including motion blur reduction and low blue light. Motion blur reduction should be obvious as to what it does, and the low blue light feature reduces strain on the eyes by reducing the amount of blue light being emitted. Turning it up adjusts the color of the display, so it's best not to use this when working on color-sensitive projects. It's worth noting that the monitor is NVIDIA 3D Vision 2 certified for your 3D gaming needs.

The OSD features 17 languages, and we'll cover the options available a bit later in the review.

PRICING: You can find the BenQ XL2720Z 144Hz Monitor for sale below. The prices listed are valid at the time of writing but can change at any time. Click the link to see the very latest pricing for the best deal. 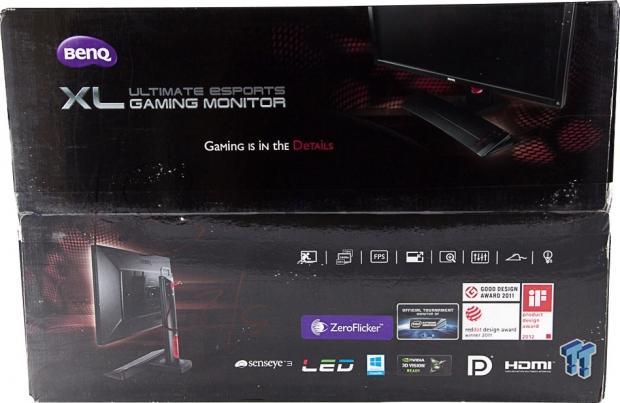 The XL2720Z comes in a fairly standard packaging setup. There is one minor difference that I feel makes a big difference. On the XL2720Z's packaging, you open the box along the big side (face), rather than one of the skinny sides. This makes removing the monitor much easier. 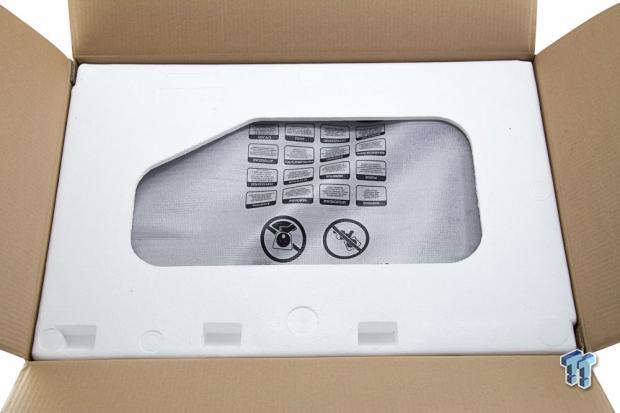 Inside the box, you'll see the panel comes wrapped in protective foam, which is centered in the box via Styrofoam to protect it from any bumps on the ride to your house. I actually believe I opened the wrong side of the box, as the cables and such are in the foam piece beneath the panel. To access them, you have to remove the foam panel, which causes them to fall out. Remember, it's important to see which side says "open" or "up." 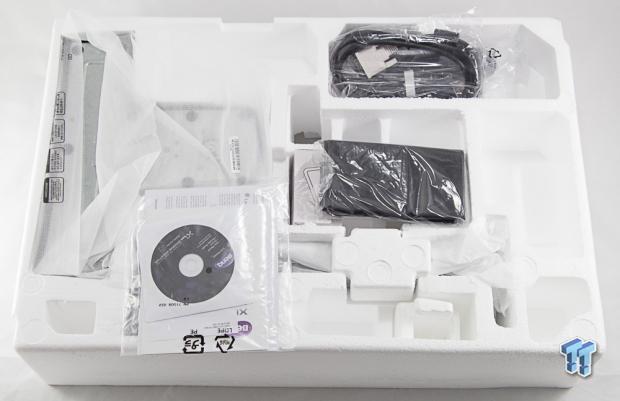 The panel comes in three pieces, so some assembly is required. The monitor also comes with a leather-like cover to protect the monitor during travel or to keep dust off at your desk, and a full complement of cables for your connecting needs. 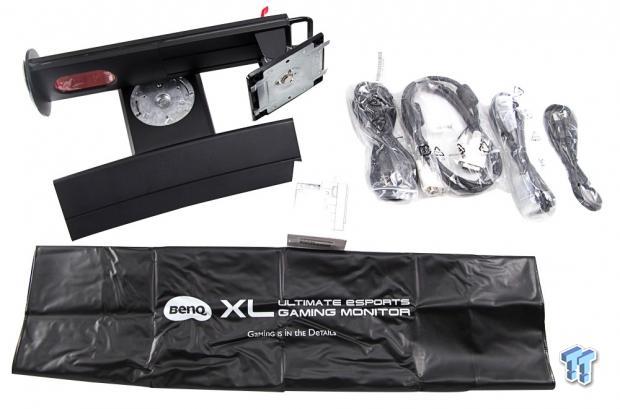 Assembly is simple. Place the stand part into the base and rotate. Lock together by turning the screw beneath in the direction indicated by the lock arrow (clockwise). 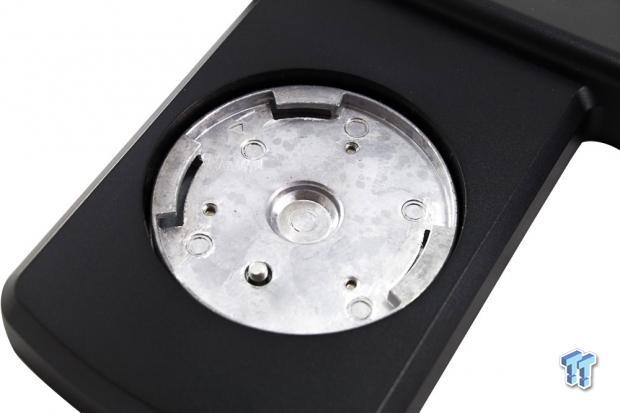 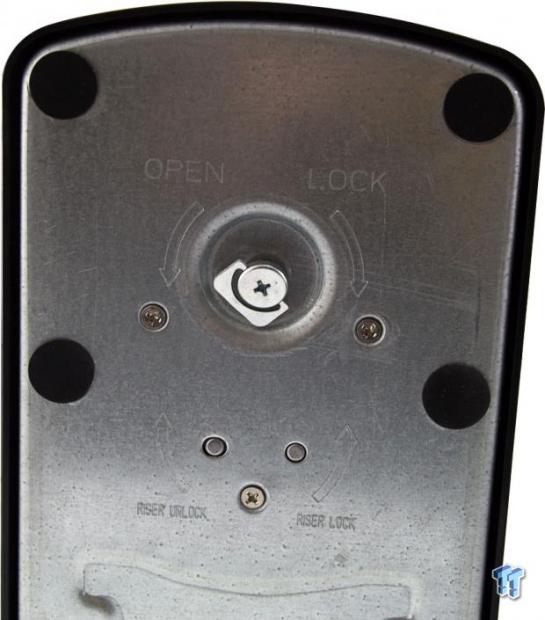 Once tight, simply hang the monitor on the stand and make sure it locks into place. 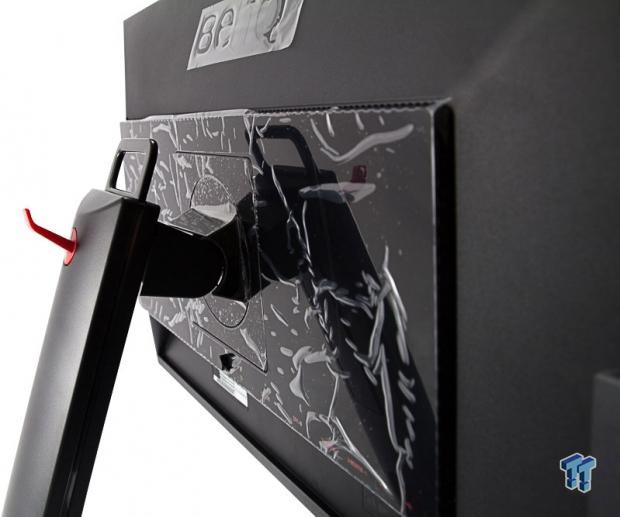 From left to right, we have a USB port; a USB Type-B port; two HDMI ports; the DVI-DL port; a D-sub port; a DisplayPort 1.2 port; and a mini-USB port. The left side of the monitor features two USB ports and a headphone jack. The USB ports run off of the integrated USB hub. 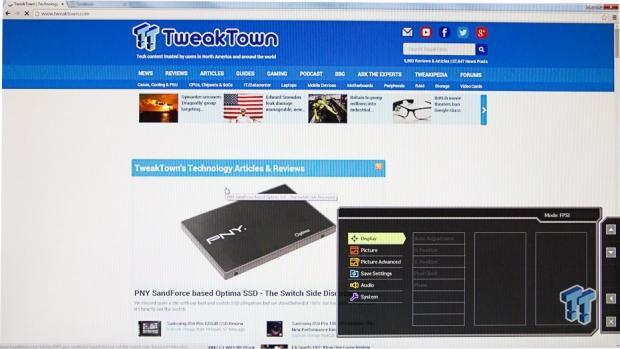 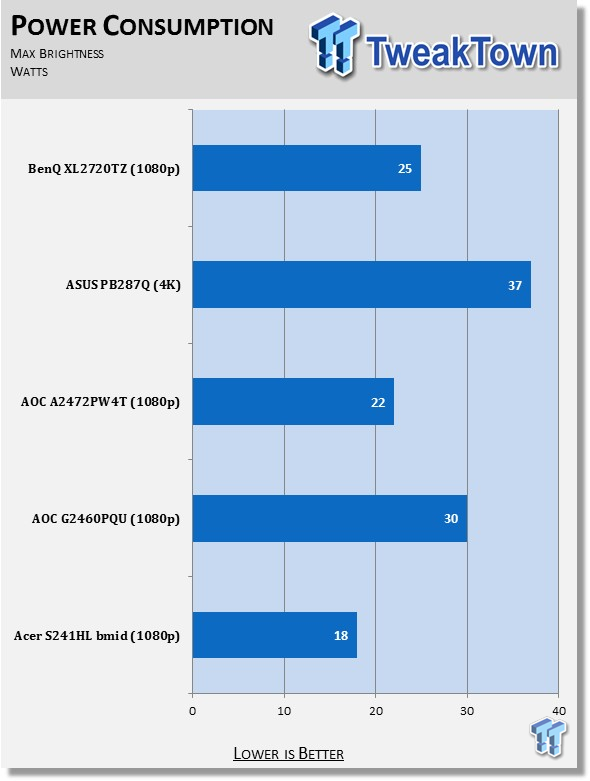 The BenQ XL2720Z sits in the middle of the pack, behind the ASUS PB2870 4K monitor and its chief rival, the AOC G2460PQU. The monitor consumes 25 watts when at full brightness. It will be interesting to see how its efficiency compares to that of the AOC G2460PQU. 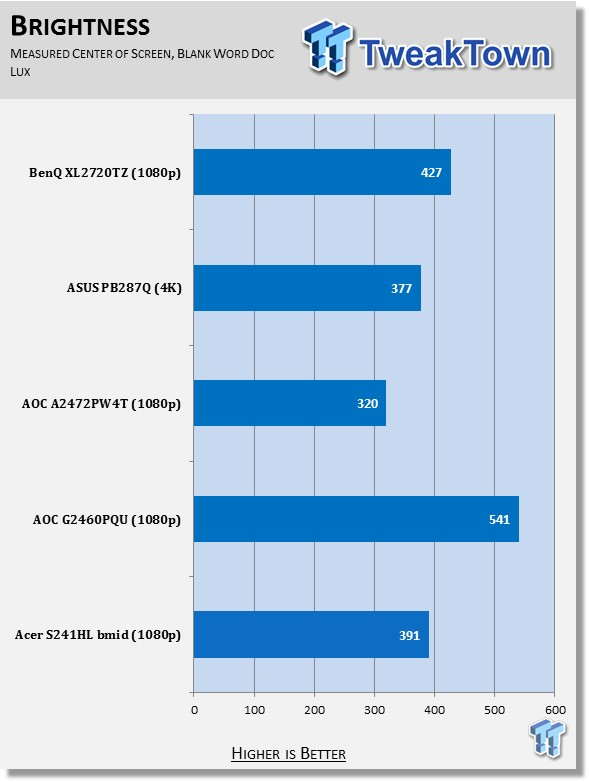 As you can see in the chart above, the XL2720Z is the second brightest monitor we've had the pleasure of testing. Coming in at 427 lux, the only brighter monitor is its main competitor, which produced 541 lux of light. 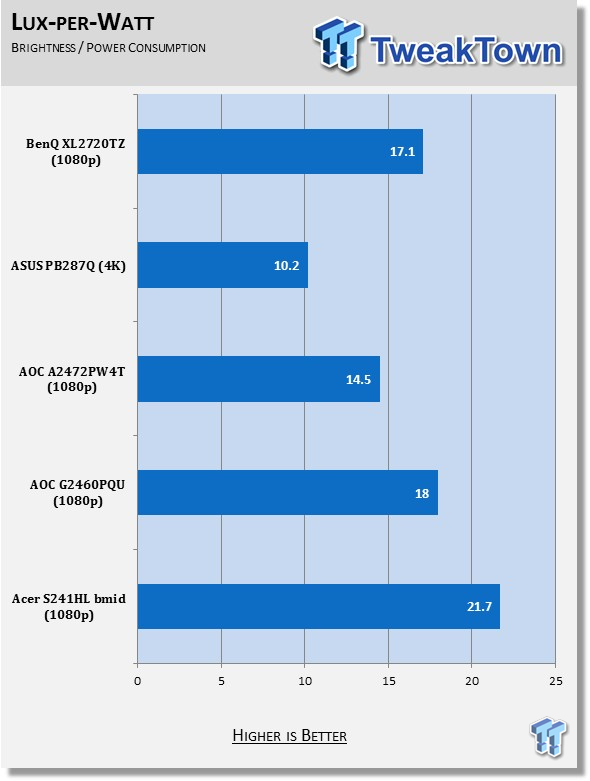 The BenQ XL2720Z again sits in the middle of the pack with a Lux-per-Watt rating of 17.1. The AOC, which was brighter and consumed more energy, came in just above the XL2720Z at 18 Lux-per-Watt.

In order to get a feeling for how the monitor works for its intended audience, I set it to FPS2, one of its "Picture Modes," and played through Crysis 3. Thanks to my new ASUS R9 290Xs, I was able to push 100+ FPS at 'Very High' settings. The monitor performed admirably in this real-world gaming test. But, the monitor is not without drawbacks. Let's cover the bad and move to the good.

I'm going to start with the menu buttons. Why you would use touch buttons is beyond me. The power button would sometimes not recognize my press, an annoying problem at best, and a downright frustrating problem at worst. The on-screen menus are, however, quite clear and easy to use, since they sit right next to the buttons.

I also found the monitor had difficulty going to sleep when plugged in via DisplayPort. When the OS signaled the system to power down the monitors, the XL2720Z would often stay powered on with a black output showing. When the computer went to sleep, powering up would often find the monitor not detected. I then had to open up the resolution properties and click "Detect Monitors" before it would turn back on and resume normal operation.

But not all about the XL2720Z is bad. In fact, the monitor has a lot going for it. The 144Hz refresh rate is excellent for FPS gaming, and certainly doesn't hurt for other games or uses. It's also decently power efficient, consuming just 25 watts at full brightness. And speaking of brightness, the monitor has a fairly high max brightness, coming in as the second brightest monitor we have tested.

The stand, too, is a highlight. It does an excellent job of keeping the monitor where you place it, and it provides an excellent array of positions through its swivel, rotation, and height adjustment features.

Furthermore, the XL2720Z provides a feature that somewhat deadens the blow of the touch-only OSD buttons. The micro-USB connection we mentioned earlier connects to a remote control that allows you to quickly switch between three saved profiles as well as allowing navigation through the OSD menus. One drawback to the controller is that it takes a bit of getting used to before being able to really use it well.

So, let's talk price. Coming in at around $450, the monitor starts to lose some of its appeal. Yes, it's a beautiful display, but if you're mostly interested in the 144Hz refresh rate, there are cheaper options out there; for instance, the AOC G2460PQU. But, if you will make use of the special features of the monitor, then it certainly is an excellent display, though there are some issues (noted above). We're just not sure it is worth the price premium placed upon it.

PRICING: You can find the BenQ XL2720Z 144Hz Monitor for sale below. The prices listed are valid at the time of writing but can change at any time. Click the link to see the very latest pricing for the best deal. 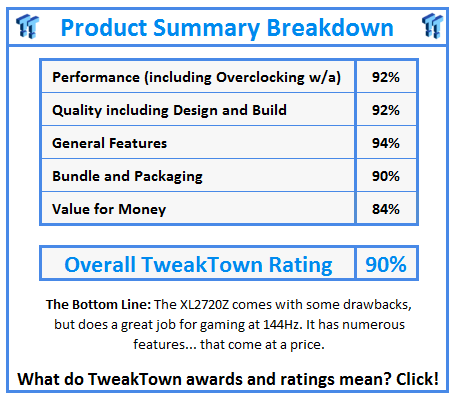