By the fourth season of CBS's Star Trek: The Next Generation, the fledging series had become a well-oiled machine, with the somewhat rocky baby steps well and truly behind it. Following the success of the season three two-part episode The Best of Both Worlds, a first for the series, the template was thus applied to future season finales with varying degrees of success. The season four finale and season five opener Redemption has joined its predecessor as an edited, feature length feature in its own right.

Redemption finds the Klingon empire at a crossroads when the Enterprise is asked to oversee the installation of Gowron (Robert O'Reilly) as Chancellor of the Klingon High Council. The threat posed when a power struggle between competing families emerges, requires Worf (Michael Dorn) to leave his Starfleet post and assist the Klingon home world in order prevent a civil war from breaking out.

While the Klingon-centric episode Redemption doesn't hit with quite the same intensity as the Borg infused Best of Both Worlds, Redemption does much to add to the mythos and political machinations of Klingon culture - a theme that would be returned to quite successfully in the later Deep Space Nine series, alongside providing a much larger role for fan favourite character, Worf. 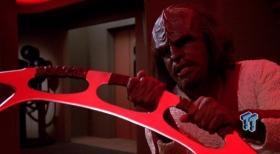 Star Trek: The Next Generation - Redemption is presented in the series original intended aspect ratio of 1.33:1 encoded with AVC MPEG-4 compression.

By now, most Star Trek Blu-ray fans will be familiar with the role that CBS Digital has played in completely reassembling and re-compositing the elements that make up the series, including the occasional implementation of new digital effects. After much experimentation, by season four, the visual look of the series had become well established, along with effects technologies and film stocks, which means that Next Generation Blu-ray's will feature a more unified visual style from here on out.

As we have become accustomed to, the elements are in great condition, with no scratches aberrations and rock solid telecine stability. There are very occasional white film artifacts, but these are minor and not distracting. The image is generally very sharp and well defined, although some of the on-set lighting conditions, particularly on Klingon vessels, makes some shots appear rather grainy and slightly hazy.

Unlike the Best of Both Worlds, all the 35mm footage and effects elements have been located, which means that the image is totally 2K native and doesn't feature any upscaled shots. 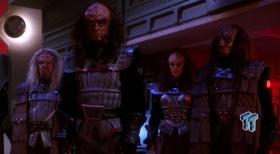 Star Trek: The Next Generation - Redemption is presented in DTS HD Master Audio 7.1 at 24 bits, alongside the original broadcast stereo audio tracks in Dolby Digital 2.0 (192 kb/s).

Similar to all season releases thus far, the audio has been expanded to full 7.1 by reverting to the original audio stem elements. Just like the full seasons, the original broadcast stereo tracks have been retained for posterity, although I doubt many will engage it (pun intended).

I didn't notice any issues with audio sync, nor dialogue intelligibility, even when the mouth pieces attached to Klingon actors cause them spit and splutter their lines. Surround channels are utilized quite well and I'm continually surprised how great the tracks are, bearing in mind this was created with stereo technology.

Low frequency output is generally present throughout, especially during the climactic battle on the Klingon homeworld Qo'noS, although it's not as tight or refined as modern, native surround mixes today. 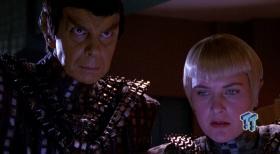 Just like the standalone disc for Best of Both Worlds, Directors Roger Lay and Robert Meyer Burnett assembled some exclusive extra features that aren't replicated on the full Blu-ray season releases. While some may be disappointed by this decision, the low entry price shouldn't cause much upset.

First up, we have an Audio Commentary hosted by Writer Ron Moore who recalls a significant amount regarding the process of fleshing out the script and its focus on Klingon politics. It's an interesting listen and hardcore Trek fans will lap it up, but not essential listening.

Next, we have the 30 minute long Survive and Succeed: An Empire at War Documentary, which focusses almost entirely on this single episode, rounding up key members of the cast in front of the camera, including Michael Dorn and Robert O'Reilly to discuss their role and those behind the camera, including someone we haven't really heard much from in The Next Generation Blu-ray's - composer Ron Jones, hopefully signifying that further input from the man will be forthcoming.

Finally, we have two Episodic promos from the original broadcast. 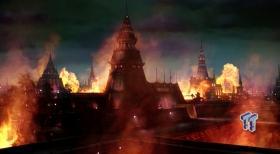