Amongst the 26 episodes of The Next Generation's third season, none are more memorable than the cliffhanger episode The Best of Both Worlds, and its season four resolution, which represented a new direction that broke tradition to span stories over multiple episodes, allowing for more creative story arcs and an audaciously dramatic escalation for the series.

Responding to a distress signal from a Federation colony, the Enterprise finds a swathe of destruction which points to the Borg, a formidable alien race of biomechanical beings with a collective consciousness, who travel across the galaxy assimilating technology and alien and human species alike. Fast approaching Earth, packing weaponry and technology that far outstrips the might of the Federation, the only thing stopping the Borg is the Enterprise and its crew, but the ship will soon find that the cost of war is very high indeed.

As part of the wider restoration of the entire seven season run of The Next Generation, Paramount have taken the opportunity to offer The Best of Both Worlds as a separate feature length episode, which seamlessly bridges the dual episode gap. Fans initially taken aback by the seemingly second bite of the cherry from Paramount Home Video need not be alarmed. The studio have assembled some truly great extra features for this standalone Blu-ray which without doubt warrant adding it next to the season collections proper, whilst more casual fans might be enticed by its low entry price. Either way, it's a win-win for all involved.

Star Trek: The Next Generation - The Best of Both Worlds is presented in the series' original intended aspect ratio of 1.33:1 encoded with AVC MPEG-4 compression.

Whilst my review for the third season of The Next Generation will be forthcoming, viewers will be immediately drawn to the updated visual look of the third series, a more cinematic look owing to a change in director of photography in Marvin Rush whose preference for a brighter and more vibrant image makes the image pop, along with a change in Kodak film stock, which featured much smaller emulsion and significantly less grain, resulting in a sharper and better defined image.

Like the first two season of The Next Generation, The Best of Both Worlds has been reassembled and re-composited by the in-house team at CBS Digital, and they've done a spectacular job of piecing it all together. It's a small observation, but three seconds of film could not be found, and which has been up-converted from analog SD video. It's fleeting and due to the dark nature of the shot means its less obvious, but it's a shame that the shot could not have been reassembled using the background from a previous shot, rotoscoping the two figures from the SD footage.

Overall, experiencing The Best of Both Worlds in 1080p is like finding out that The Next Generation filmed another movie and it's just been unearthed. 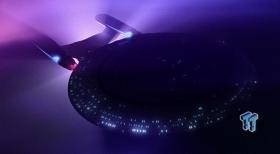 Star Trek: The Next Generation - The Best of Both Worlds is presented in DTS HD Master Audio 7.1 at 24 bits, along with the original stereo audio tracks in Dolby Digital 2.0 (192 kb/s).

Similar to all season releases thus far, the audio track has been expanded to full 7.1 by going back to the audio stems. There's really little to say - this is by far and away the best the series has ever sounded and will likely ever sound. For those that prefer to listen to the original stereo audio tracks, they'll be pleased they are still catered for.

I didn't detect any audio sync issues, and dialogue is generally mastered at a good level. Surround channels are utilized more aggressively than expected, phaser beams emanate seamlessly from the front to the rear soundstage, and the action oriented plot allows for more exploitation of the audio spectrum.

Low frequency output is generally present throughout, underscoring some of the more dramatic sequences and to convey size, be it the hulking Borg cube or the sleek Enterprise D.

Overall, free of the confines of stereo channels, The Best of Both Worlds is allowed to shine in a lossless mix whilst remaining true to the original sound design. 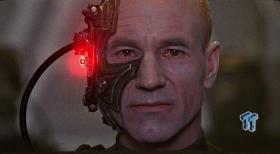 Despite their exhaustive schedule creating extra features for the full season Blu-ray releases, Roger Lay and Robert Meyer Burnett return with some exclusive extra features, which won't be duplicated elsewhere and which focus exclusively solely on the feature length episode. Let's dig in.

First up is an Audio Commentary featuring director Cliff Bole, actress Elizabeth Dennehy and Trek-sperts Michael and Denise Okuda. The choice of participants across all areas makes for multiple interesting perspectives, and much of the discussion revolves around how important the episode is to The Next Generation canon of stories, and its impact on popular culture, and the franchise moving forward.

Next is the 30 minute long Regeneration: Engaging The Borg which features newly shot retrospective interviews and vintage behind the scenes footage discussing the genesis of the storyline, and the risk factor of endangering the crew with such a formidable enemy, and the shows many production elements, including visual design and effects. It's particularly interesting to see the isolated visual effect element shots interspersed throughout, although seeing the Borg cube explode in 16x9 widescreen makes me wonder what The Best of Both Worlds would have looked like presented in a widescreen aspect ratio.

Finally, we have a five minute long Gag Reel taken from the camera negative and presented in 1080p, along with two SD Episodic Promos. 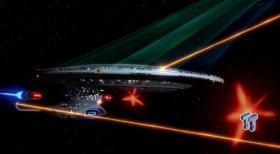