For those that constantly deride the lack of risk and the dearth of big budget sequels in Hollywood today, I'd point you in the way of Pacific Rim. It's neither based on an existing franchise, doesn't feature any big name stars, it's written by a screenwriter with just three films to his name, it's directed by a known figure, but one who's failed to transition his talents into successful, big budget features. It would seem that the odds are stacked against Pacific Rim, but I don't doubt that the film will be a solid success, partially because of the films stunning visuals, and partially because we've never seen such an audacious event like it before. 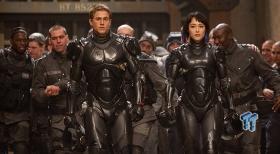 Pacific Rim opens to a history of the waves of attacks unleashed on the world by giant beasts dubbed 'Kaiju', after a portal rift opens at the base of the Pacific ocean, allowing for monsters to burst through their dimension into ours. After being pummeled by the Kaiju for some years, countries come together and pool resources to construct a worldwide force of giant robots, manned by twin human pilots in order to protect what is left of humanity. One scientist, Dr. Newton Geiszler (Charlie Day), has a dangerous theory which could lead to a breakthrough in the battle, but with the attacks increasing in both ferocity and frequency, humanity is on course to be fast eclipsed as the dominant species on Earth. 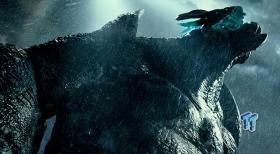 I'm in two minds about how this review goes. I've criticized recent releases such as The Lone Ranger for being light on plot, predictable and in need of some editorial nip and tuck. All these criticisms can be leveled at Pacific Rim, and more. But it's so difficult to be hard on a film that wears its lack of depth as a badge of honor. 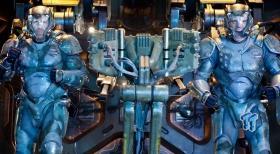 Director Guillermo del Toro is a hugely inventive and accomplished director in his own right, helming titles like Pan's Labyrinth and Hellboy alike with visual aplomb. He's not so much slacking with Pacific Rim, as he is with bringing his keen visual eye and a new spin on such a basic plot outline. The acting is solid, even if human play a secondary and almost perfunctory role, although Australians will be a little taken aback by quite possibly the worst faux Australian accent yet committed to film. 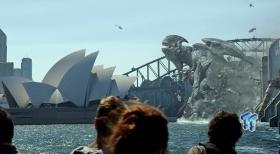 Pacific Rim is a film that doesn't make one ponder the meaning of life, but certainly reminds about the possibilities afforded by modern digital technology. Really, our imaginations are truly the limit. 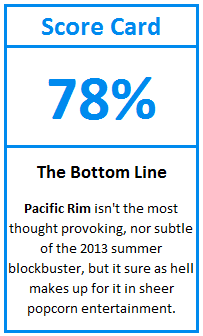