Recent seismic activity has led many Tokyo based scientists to suggest that a 'big one'; that is a large quake could occur in the region at any time - in fact, one is well overdue. As such, Japan lives under the constant shadow of imminent disaster, a growing concern following the 2011 quake. After my trip to Tokyo, where I was swept up in a quake drill, I can certainly attest to their seriousness in dealing with such issues. However, preparedness does not lessen the fear and traversing the cavernous subway tunnels provided plenty of opportunity to ruminate on. Tokyo Magnitude 8.0 is a 2009 anime series which deals with this very issue, which many western audiences will likely only have been recently introduced to, following worldwide video releases this year.

Young siblings Mirai and Yutaka are separated in Odaiba when a massive earthquake strikes the Tokyo mainland, which brings down bridges and buildings and damages the high tech infrastructure that brings the city together. Assisted by a kindly young woman named Mari, the children must brave the obstacles before them to be reunited with their parents a few suburbs away. 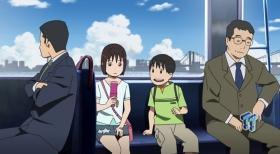 Tokyo Magnitude 8.0 is presented in the series original aspect ratio of 1.78:1, encoded with AVC MPEG-4 compression.

With solid blocks of color and relatively simple animation, anime generally encodes well with modern MPEG4 codecs and in this regard Tokyo Magnitude 8.0 is no exception. Compared to SD versions, the 1080i transfer is much sharper and features better color reproduction, along with the absence of artifacts, such as mosquito noise and general fuzziness.

Sadly however, there are a few issues with the use of interlaced video. Most are admittedly only obvious when the image is paused (obtaining screen shots for this review was extremely tedious), but take the form of combing and motion artifacts. It would seem that no region has received a 1080p transfer, so potentially the series was only produced for 1080i, but that would seem an odd choice.

Overall, a solid transfer that is seemingly accurate to the source, but doesn't reach the heights of other animated offerings. 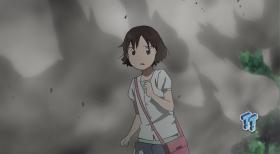 Tokyo Magnitude 8.0 is presented with two dubs; the original Japanese encoded with DTS HD Master Audio 2.0 at 24 bits, and an English dub encoded in lossy Dolby Digital 2.0 at 448 kb/s.

I sampled the U.S. produced English dub, but chose to watch the series with the original Japanese language. It's a bit of a shame that the audio mix was prepared for stereo, rather than surround, foregoing the obvious opportunity to provide some reference quality effects. The absence of low frequency effects underscoring quake sequences is sorely missed. Once Pro-Logic mode is engaged on your receiver, the algorithm will do a reasonable job of extrapolating surround data, but it's clearly an inferior solution compared to a native surround mix.

Audio sync is pretty good, although unsurprisingly better for the Japanese audio track. Sound effects are reproduced with what I can only assume are faithful to the source. 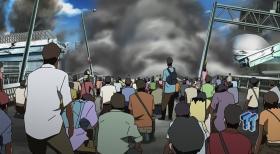 The discs packaging makes no mention of extra features, so it's a pleasant surprise to find a few are indeed included.

If you are reticent on watching the entire series, you can opt for the Digest Version, which condenses the entire series into one 60 minute featurette, in 1080i, to boot. Unsurprisingly, much of the drama and character beats are dropped for brevity, but it's still a nice overview of the series to potentially re-watch in the future.

Next is a Animation Slideshow featuring character portraits and scenes from the series, and a Trailer in window-boxed, up-scaled 1080i. 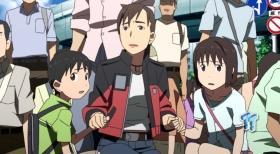