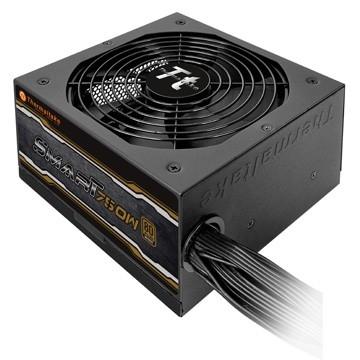 Thermaltake is most certainly known for quality in their high-end power supplies. We've reviewed quite a few of them here at TweakTown and have been quite pleased with them. We've also started taking a look at some of their lower-end offerings to see if they are just as worthy of your hard earned cash. About a month ago, we took a look at the EVO Blue 2.0 and were relatively pleased, even if it was a bit on the expensive side for what it delivered.

Today we have another mainstream unit from Thermaltake. The SMART 750W is most certainly meant for those that are on more of a budget, as it is significantly cheaper. It also lacks a few features from higher-end units such as modular cables, Over Temperature Protection, and a 50C power rating. There are quite a few out there that simply don't demand the absolute best out of their power supplies and just need something that works. That's right where the SMART series from Thermaltake fits in, so let's dig into this unit and see if it is just what the doctor ordered for those trying to save some coin. 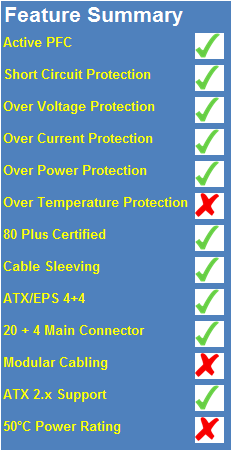 As stated above, the Thermaltake SMART 750W lacks a few features that we usually see from Thermaltake, but this is where you'll see several of the cuts needed to lower the price of a unit. The SMART 750W features SCP, OVP, OCP and OPP, but it does lack OTP. This isn't a huge deal so long as you make sure there is adequate airflow in and out of your case. The SMART 750W has all native cables and they are all of the flat ribbon type, including the motherboard connector. The Thermaltake SMART 750 W power supply is rated for 80 PLUS Bronze efficiency, but not for 100% continuous output at 50C. Instead, it is rated at 40C, which should be plenty for most of what this power supply should see throughout its life. 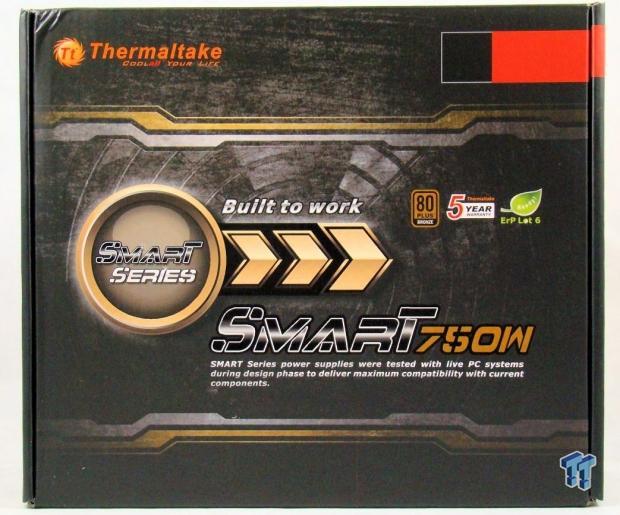 Thermaltake's packaging makes the SMART 750W appear to be a bit higher-end than what it really is. There isn't much on the front to give you info on the unit other than warranty, wattage and efficiency. 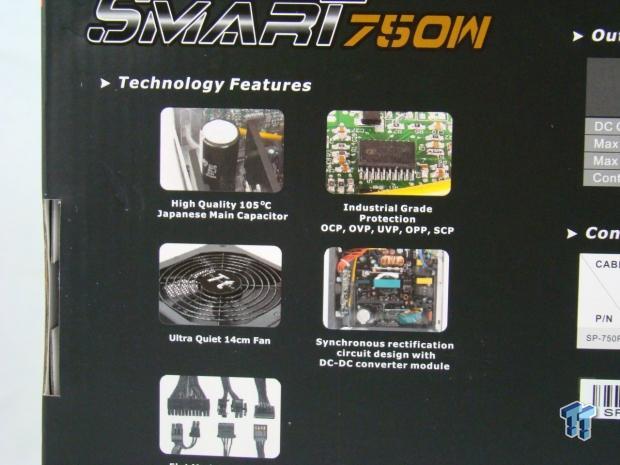 Turning things around towards the back of the box, we find some pictures denoting a few of the features of the SMART 750W power supply. Note that it only says it has a Japanese main capacitor and not 100% Japanese capacitor construction. 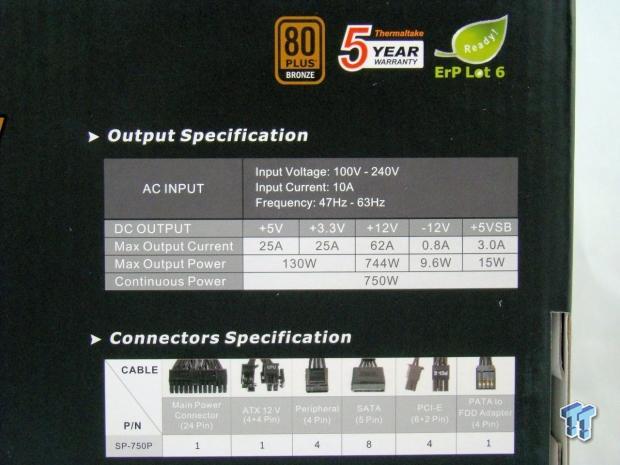 The last bit of information on the back enlightens us as to the efficiency of the unit and how loud the fan is at various loads. 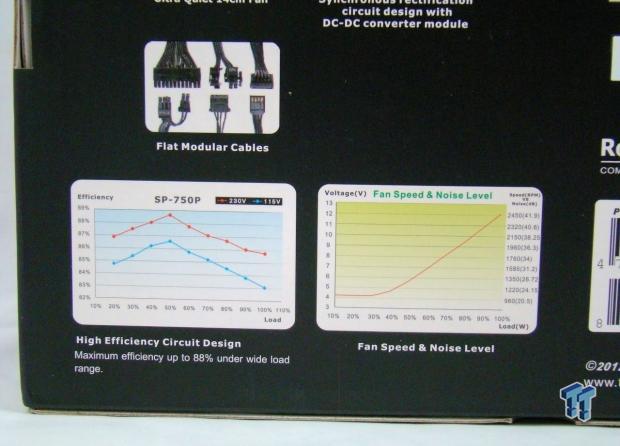 One side of the box fives us a bulleted list of features in several different languages, while the other sides have nothing overly useful on them. 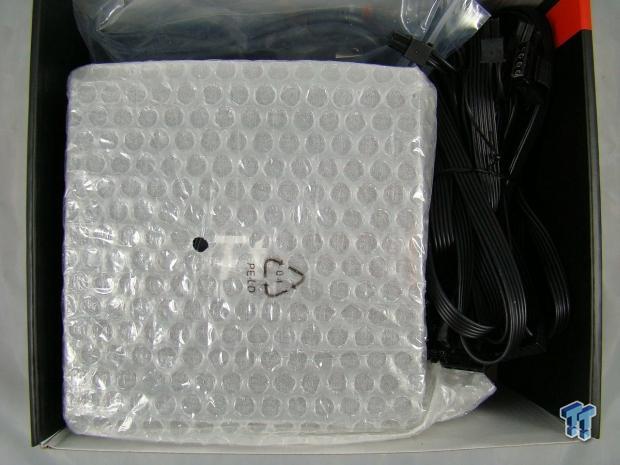 The SMART 750W power supply doesn't have anything special concerning the packaging of the unit. Aside from the bubble wrap around the power supply itself, there isn't anything else to protect the unit during shipping. 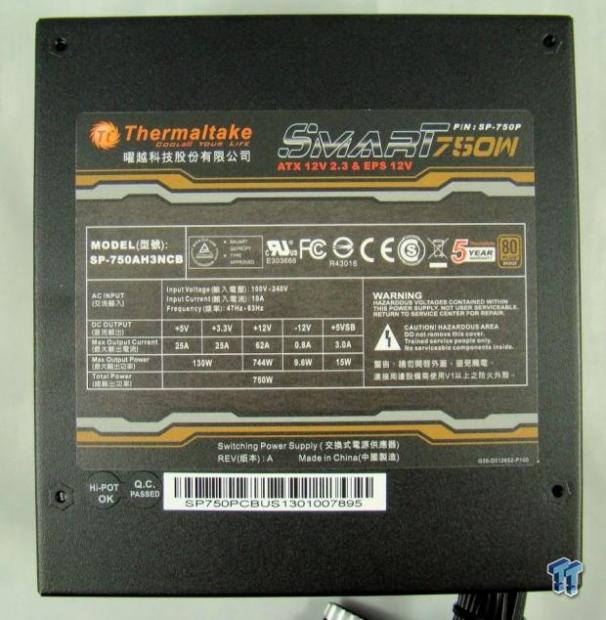 Out of the box, we find the I/O specification label on the top of the power supply and get a look at the semi-gloss black finish on it. 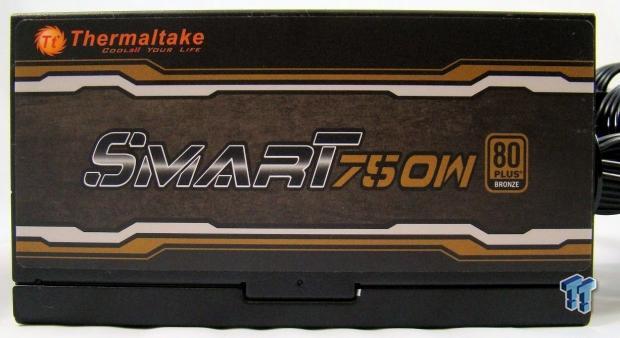 Both sides feature the same logo with the opposite being inverted for being installed in the bottom of a case. 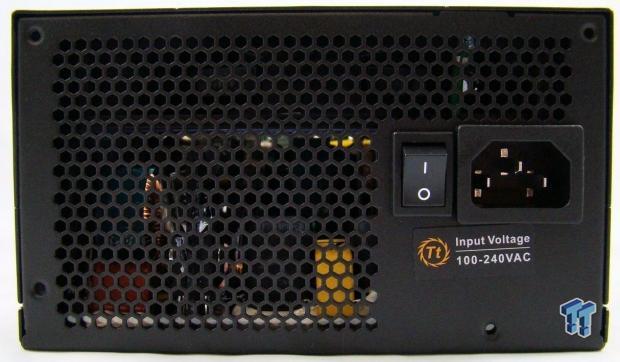 There isn't much going on back here either. Things are standard with a honeycomb mesh grill, AC input and on/off rocker switch. 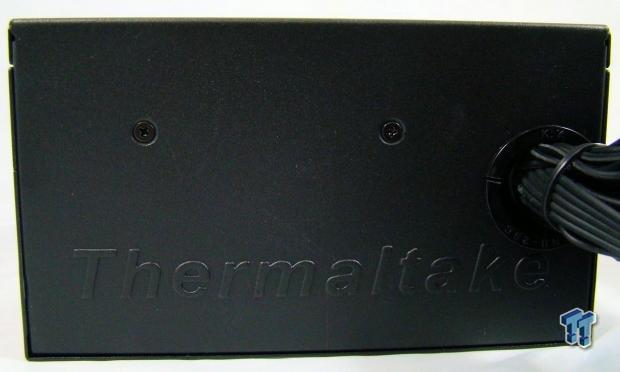 All of the cables for the SMART 750W power supply are natively wired so the front of the unit looks rather bland. Thermaltake added their logo stamped into the case here to add a little bit of spice. 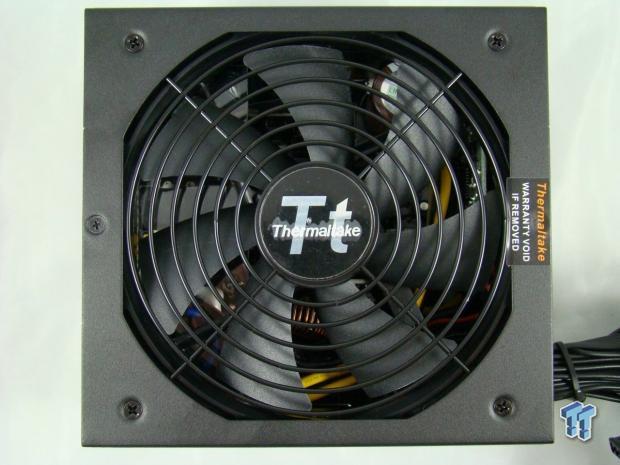 The bottom of the SMART 750W houses the 140mm fan with wire grill that cools the power supply. 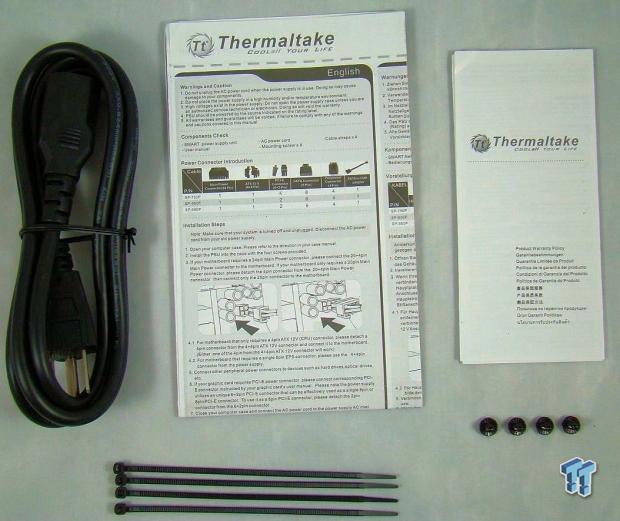 Thermaltake doesn't stray too far from the norm with the cable selection and connector availability for the SMART 750W, which is a good thing, since this is an entry-level power supply. It features two cables with two PCI-E connectors each for a pair of video cards. Peripherals are handled via four cables that provide eight SATA, five Molex and one FDD connector.

Perhaps the nicest thing to see is that there is only one 8-pin connector for the motherboard instead of the two we usually find. Most people who have a motherboard that requires the additional power will likely be using a power supply of higher caliber, which means it would most likely be an unused cable that just clutters the case up even more. 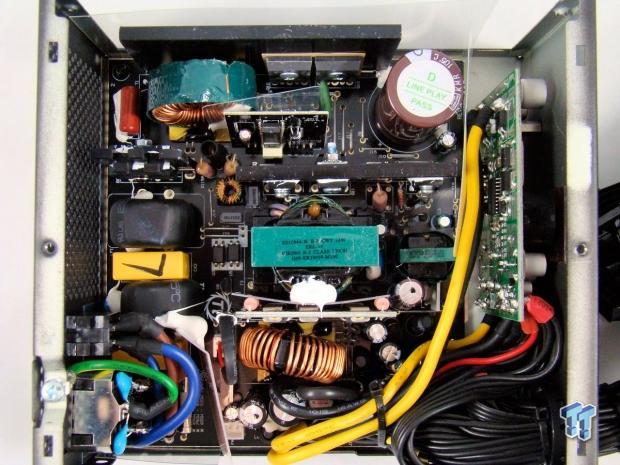 The Thermaltake SMART 750W is lacking quite a bit when it comes to the passive cooling inside the unit. That is quite okay though as many of these newer units use quite a few less components and require less cooling. Less passive cooling also allows air to flow more freely throughout the entire power supply, which also aids in cooling the unit. 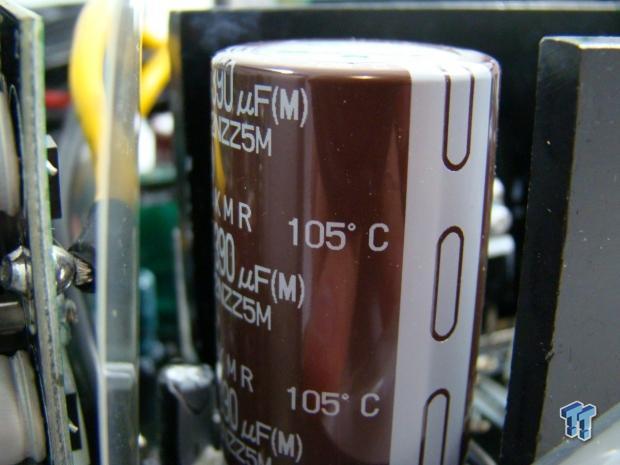 Just as promised, a single Nippon Chemi-Con bulk capacitor sits on the primary side of the power supply. 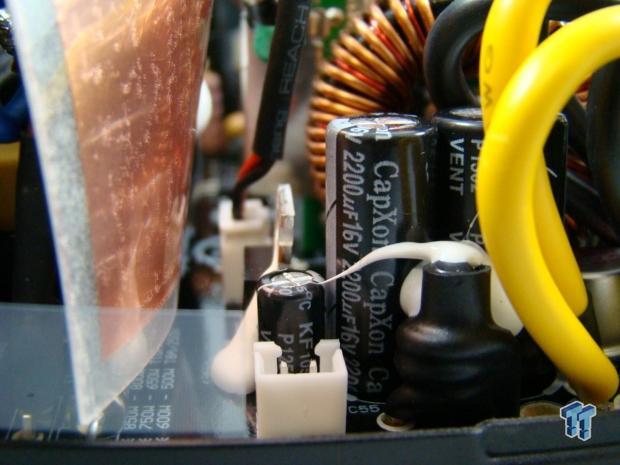 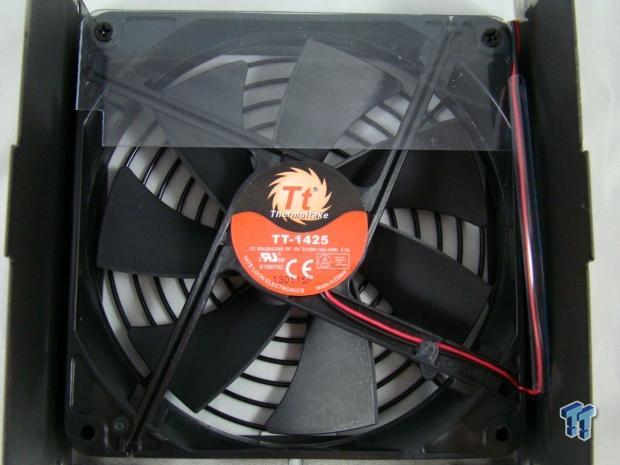 Thermaltake's TT-1425 140mm fan provides the active cooling for the SMART 750W power supply. The sticker tells us that this is simply a Yate Loon rebrand.

The tests performed are based around six conceivable setups that are out there and progressively load down the PSU up to the power supply's limits or 1000W, whichever comes first. Since our test equipment's limits are higher than that of the Thermaltake SMART 750W power supply, we can test it to the maximum.

DC Output quality for the Thermaltake SMART 750W was great and well within specifications. During Test 1, we saw 13mV of noise on our scope. When we increased the loads in Test 2, the ripple climbed to 18mV at a little under half. During Test 5 under a load of 750W, the oscilloscope showed a maximum of 34mV on noise on the 12V rail.

The Thermaltake SMART 750W is rated for 80 PLUS Bronze efficiency. This means that the power supply must perform at 82%/85%/82% efficiency at 20%/50%/100% loads respectively. As you can see, the SMART 750W passed on our bench, and wasn't close to failing at any point. In fact, our unit was right on par with the requirements for 80 PLUS Silver, which is very nice to see out of a mainstream power supply.

As was stated at the beginning of this review, Thermaltake is very well known for their high-end power supplies. We've seen this time and time again with the units that we have reviewed like the Toughpower XT Platinum 1275W and Toughpower Grand Platinum 700W just to name a couple. We've been anxious to this point to take a look at some of their lower-end offerings as well to see if they represent the same quality we've come to expect from Thermaltake. Of course, it will be short a few features and may not come with extras such as Velcro cable ties, but there are always some sacrifices that must be made when trying to make a much cheaper unit.

The SMART 750W is a unit that most certainly does make some sacrifices in order to keep the cost of the unit down. Right out of the box, or perhaps while still in it, many will notice that modular cables and efficiency have been slashed compared to higher-end units from Thermaltake. When we dig a little deeper we also find that the unit doesn't feature OTP or a 50C power rating. None of these are anything that you should really be concerned with in a mainstream power supply, as it is quite the norm to be without all of them. Even the inclusion of the CapXon capacitors shouldn't be something too many concern themselves with for this unit. Yes, we have found throughout the years that Japanese capacitors are far superior to Chinese and Taiwanese capacitors, but they aren't nearly as bad as they were ten years ago.

You can tell that the performance suffers a little bit with the use of the Chinese capacitors as well as the voltage regulation could be a bit better. Voltage regulation is within 2% across the board, but the variances are a little bit higher than we usually see, even in mainstream power supplies. As far as the DC output quality goes, the results are much better than expected. Usually this is the area that we see suffer when using non-Japanese capacitors, but with a maximum ripple of 34mV, it is hard to complain at all. The efficiency was spectacular for the SMART 750W power supply. We suspect that we got a great example of this unit as if they were all capable of this level of efficiency, we would likely see the power supply come with an 80 PLUS Silver rating instead of Bronze.

Thermaltake really hits a home run with the SMART 750W power supply when you take into consideration the price of the unit. Being able to score a 750W unit with good performance for around $65 is a huge deal and one that can net some additional performance elsewhere with the cash you save. This is most certainly the biggest thing the SMART 750W has going for it and I would not only recommend this unit for those seeking cheap mainstream unit, but also for entry-level enthusiasts trying to make every last dollar go as far as possible. 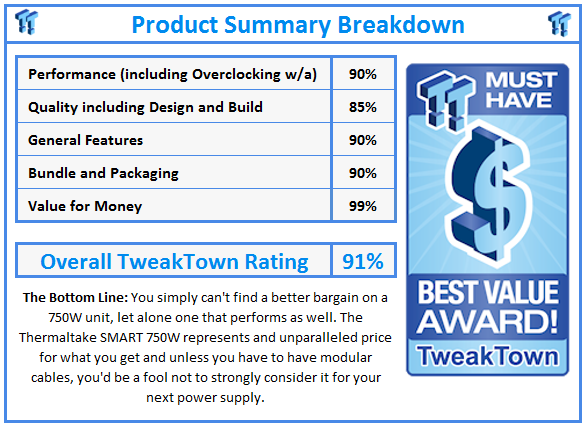