The first Sony smartphone I reviewed was the Xperia TX, which wasn't the fastest device on the block. It featured a dual-core processor, 1GB of RAM and a great 13-megapixel camera. The display left me wanting more, and that is the job of the Xperia Z.

Sony have been struggling in the smart device market, but the Xperia Z is a departure from everything we know about their devices, and a head-first dive into a spec-filled, beautifully-designed future for the company.

Sony's Xperia Z has a Full HD (1920x1080) display, and it looks gorgeous - which will have people turning their heads on the street. Sony need this right now, just as HTC do with their troubles in the market after being a leader just years ago.

Let's get into the specifications, pricing and availability of the Xperia Z.

Sony have jam-packed the Xperia Z with some of the best components on the market - it truly stands on its own two feet, ready to swing at any potential competitor. We have a 1.5GHz quad-core processor from Qualcomm (the MDM9215M), backed up by the Adreno 320 GPU. There's 2GB of RAM inside the Xperia Z, and 16GB of internal flash storage backed up by a microSD card for expandable storage. 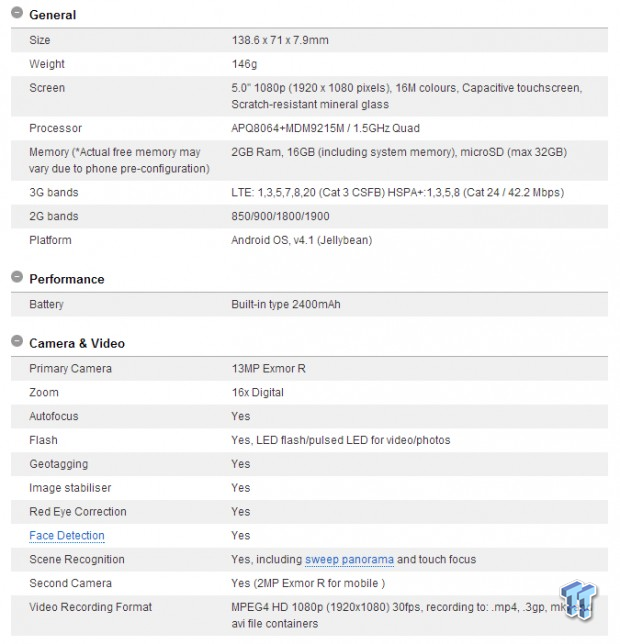 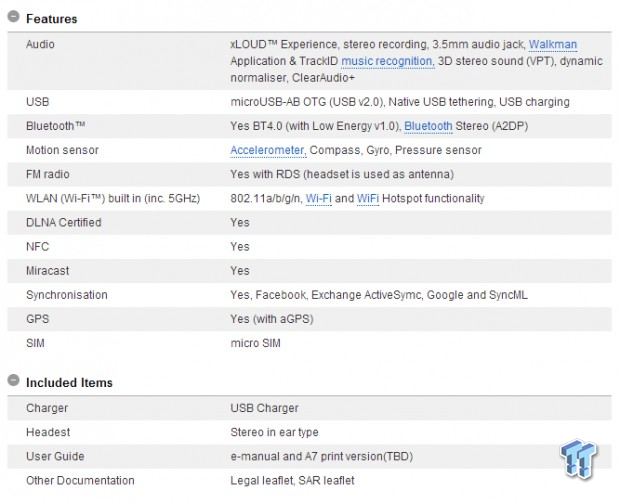 We have the 5-inch (441 PPI) display with a beautiful 1920x1080 pixels on top, and is backed by a shatter-proof and scratch-resistant glass. On top of this we have Sony Mobile BRAVIA Engine 2 helping the screen provide that extra 'pop'.

We have LTE support, Wi-Fi with the usual 802.11 a/b/g/n, DLNA, Bluetooth 4.0 and NFC support. Going from these specs, there doesn't seem to be much that the Xperia Z doesn't do - which is great. If you're someone who wants one of the fastest smartphones on the market, you will definitely want to consider the Xperia Z.

Newegg are currently selling the Xperia Z unlocked for $649.99 with free shipping at the time of writing. This is a decent price for the specs inside of the phone, and that gorgeous 1080p display. As always, Google's Nexus 4 (which is made by LG) is nearly half the price of the Xperia Z, and that is something to consider when thinking about picking up the Xperia Z from Sony.

Sony's Xperia Z is one of the best looking smartphones on the market, as soon as you see it in person, you'll love the look of it from top to bottom. It feels great in the hand, and is great to use. The Xperia Z weighs in at just 146 grams, making it quite light in the hand.

The front of the Xperia Z has the iconic SONY logo up the top, with the earpiece above it. Down the bottom of the Xperia Z we have the microphone, for you know, speaking into. 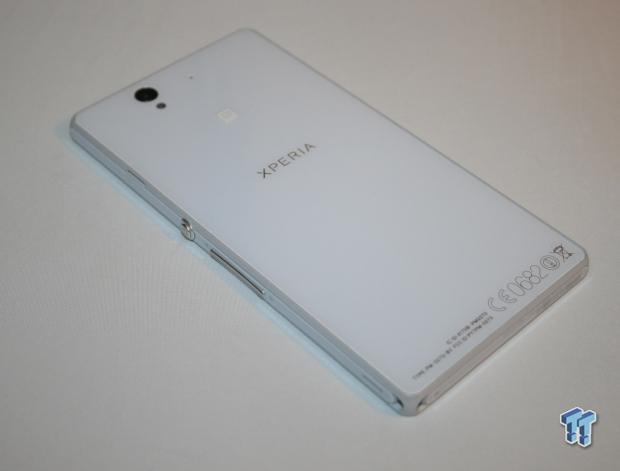 The Xperia Z from the back looks gorgeous, with its beautiful style and XPERIA logo on the back. We can see the power button sticking out from the side, which is definitely a departure from the usual styling we can expect from the likes of Samsung and LG.

On the right side of the phone we have the loudspeaker, volume rocker, power button and SIM card slot (from left to right, respectively).

On the left side, we have the power/charging microUSB slot and microSD card slot. These are little slits that can be opened up, exposing the port. When closed, the Xperia Z is actually water-proof - yes, water-proof.

On the very top of the phone we have the usual 3.5mm headphone/speaker jack.

At the bottom of the phone we have a little space to put a cord in and use it to hold it around your wrist.

The display on the Xperia Z is definitely something to write home about, where we can enjoy a 5-inch 1080p display with a pixel density of around 441 PPI. 1080p displays on smartphones are really only coming onto the market now, but there are just a few right now, with the Xperia Z obviously being one of them.

The 5-inch 1080p display on the Xperia Z is definitely a sight to behold. It is beautiful, but it does have its downsides, too. The viewing angles on the display were actually quite bad - and while this isn't a point that should make you decide to not buy the phone - we're telling you anyway. There would be times I'd use the Xperia Z laying down in bed, and if I didn't hold it right, the screen looked quite bad with the viewing angle.

Again, not something that makes it a showstopper, but it definitely a point that needs to be addressed by Sony. If they want to provide their devices with a high-end 1080p-capable display, at least make it close to perfect. I'd like to see their next 1080p-capable phone with better viewing angles.

The loud speaker on the Xperia Z was decent, capable of blasting out a surprising amount of audio when watching videos off YouTube, or replaying some movies I recorded on the excellent rear-facing camera. Spotify streaming was also great, again, loud enough for a few people to be sitting around.

Call quality was top notch on the Xperia Z. I had absolutely no complaints about it whatsoever.

Sony have sprinkled the usual features over the Xperia Z, where it again features their beautiful Timescape UI, something I loved from the Xperia TX, which we reviewed a couple of weeks ago now. 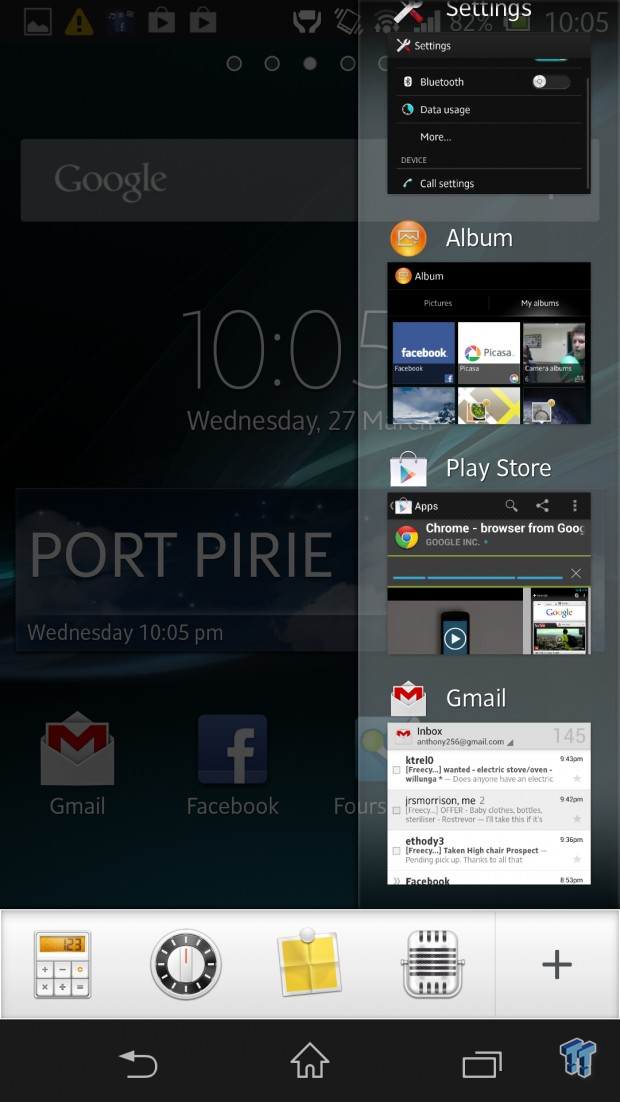 I've gone over the Timescape UI in my Xperia TX review, so I'll just quickly skim over some of the things I enjoyed on the Xperia Z. The multi-tasking pop-up is great, and actually quite useful. We have some options down the bottom for the calculator, timer, some notes and a voice recorder. You can edit these shortcuts, too, which is nice.

To the right of the multi-tasking screen, we have your last-used apps. From here, it's like any multi-tasking UI overlay, you can visit the apps you were just using and either tap into them or swipe-to-close. 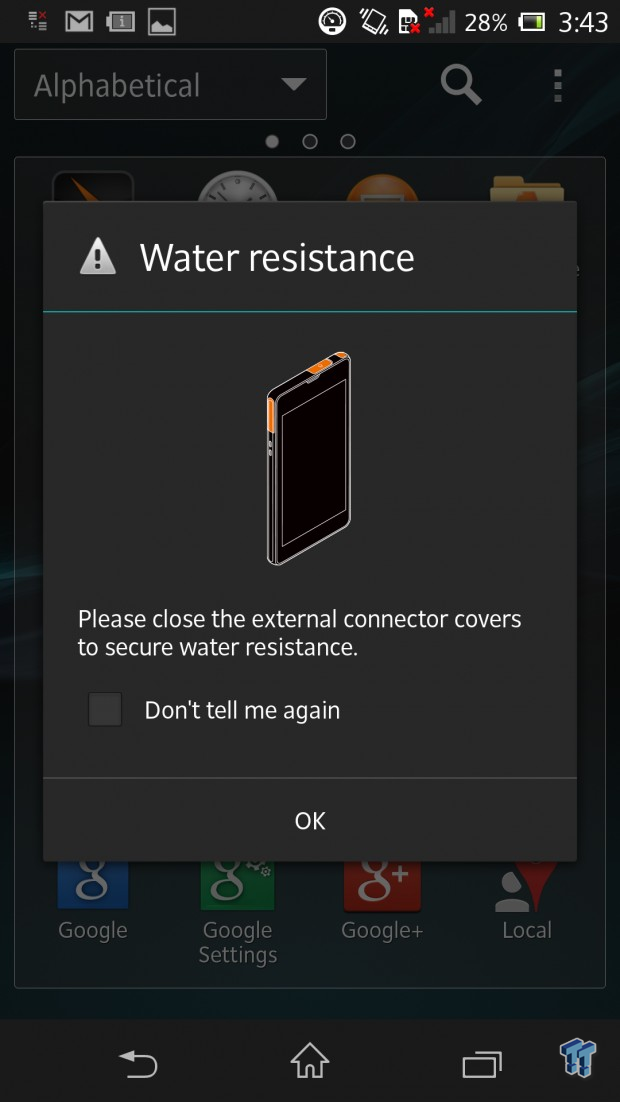 Another nice feature is the near-exclusive of the Xperia Z being water-proof. These days, most smartphones aren't water-proof, but the design of the Xperia Z itself has been built from the ground up to be water-proof. Each flap to access the ports on the phone is designed to keep water out, which is impressive. 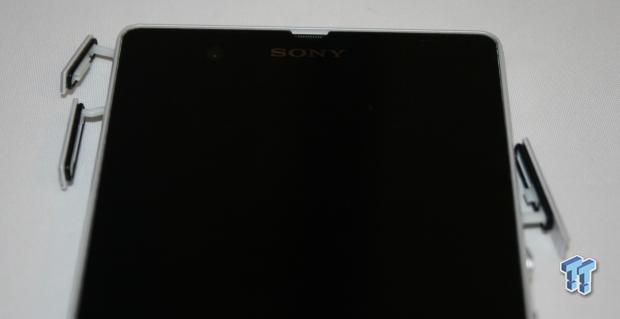 The above shots show off some of the water-proof elements of the phone with their ports opened fully.

The performance on the Xperia Z is next to unparalleled. The only device that even comes close is the pure Android experience on the Google (but LG-made) Nexus 4. The Xperia Z is stellar, both in real-world use and in benchmarks.

I used it as my primary phone for a little under two weeks, so I could get a great feel for the phone. This is why we don't do smartphone reviews every three days, because else it is too formulaic - there needs to be a 'real-world' feel, and then a 'real-world' opinion - which is why I don't like the word 'review' for smartphones.

Let's move onto some images from the camera. Here are some examples of the quality of the camera: 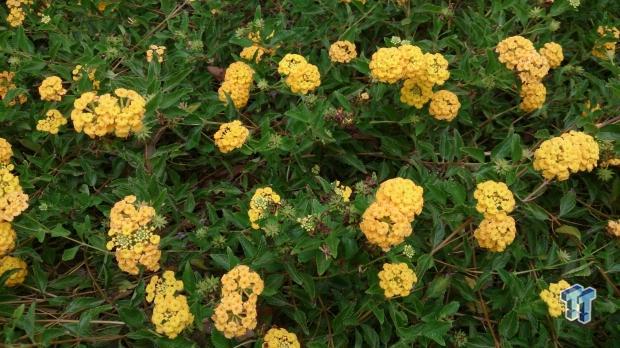 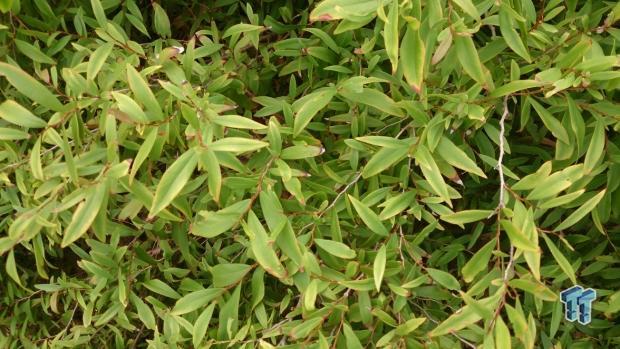 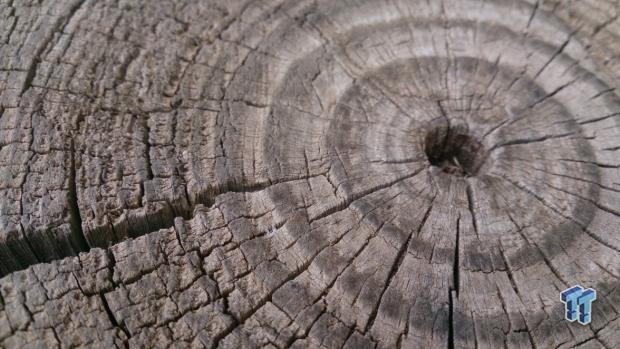 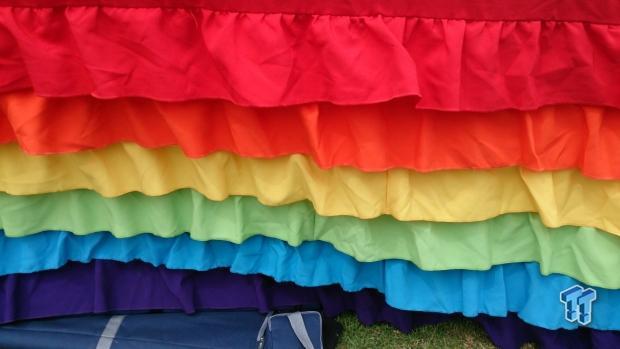 Between our last smart device review and now, we've had Futuremark release 3DMark for Android and Rightware also with Basemark X. First up, we'll dive into some Basemark X results. 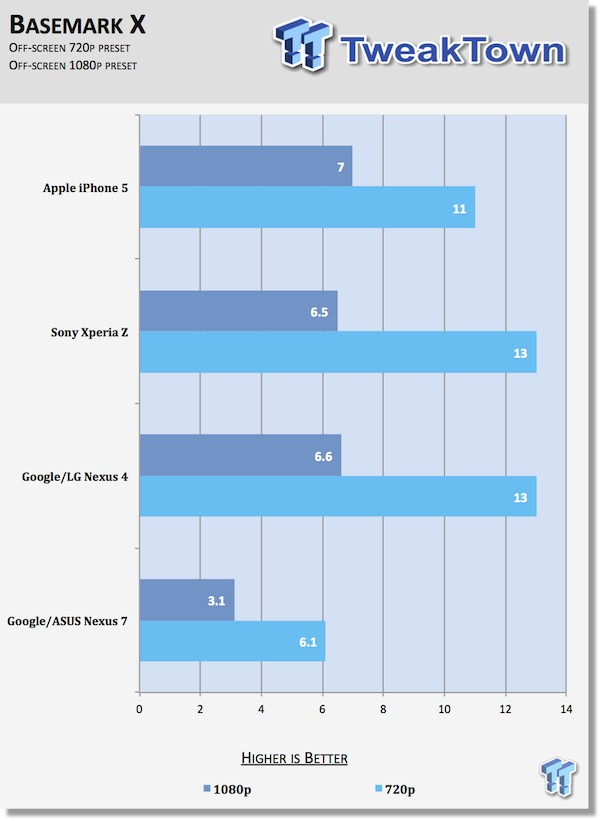 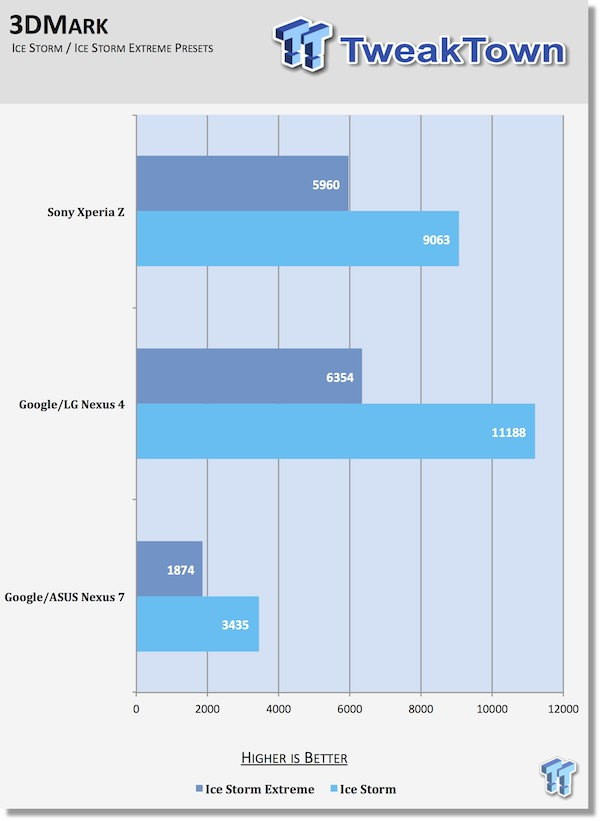 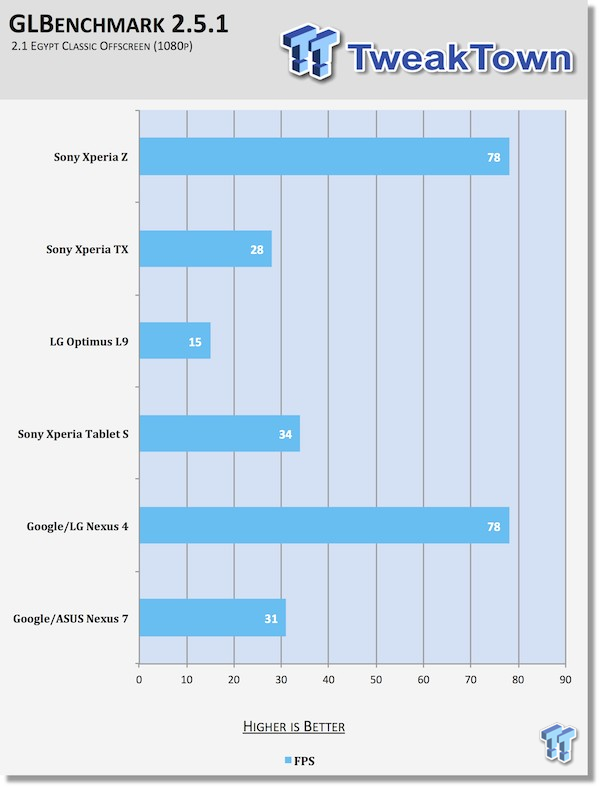 The Xperia Z equals the Nexus 4 with 78 FPS, and thrashes everything else on our test bed by a large margin. 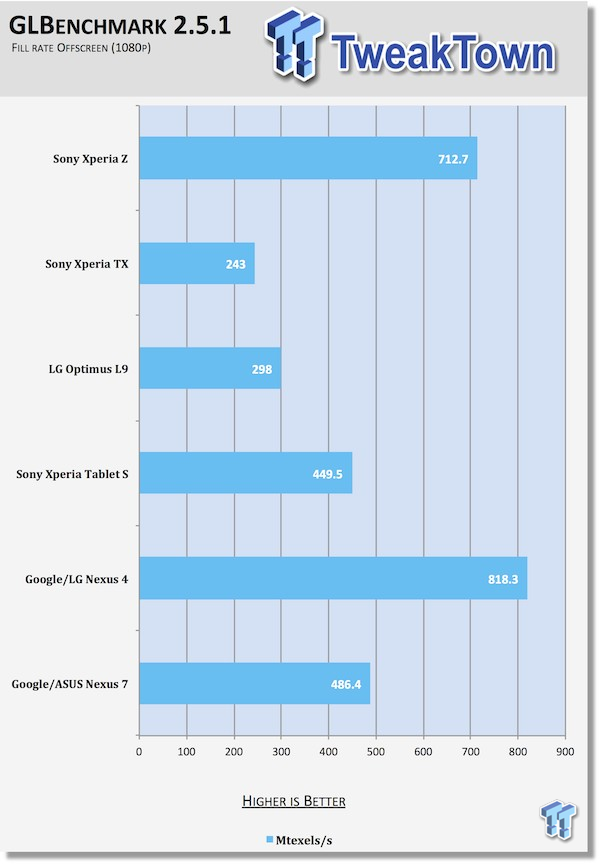 Moving onto the GLBenchmark Fill Rate Offscreen (1080p) benchmark, the Xperia Z is a little over 10% slower than the Nexus 4. Again, it simply thrashes everything else we have tested. 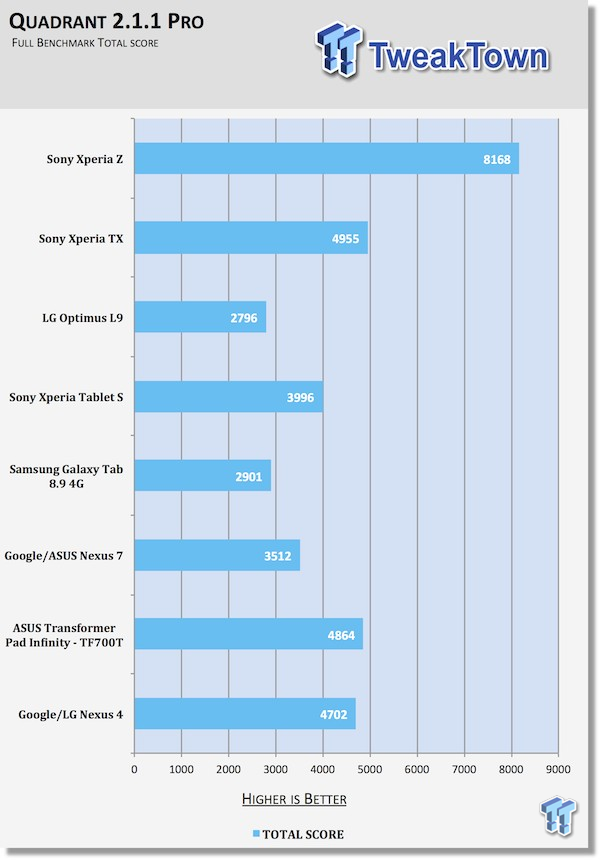 This is something very surprising, where in Quadrant 2.1.1 Pro's total benchmark score, the Xperia Z simply flies ahead of everything - even the Nexus 4. Pushing 8168 compared to the closest competitor, the N4 with 4702. Nothing else even comes close to the Xperia Z. 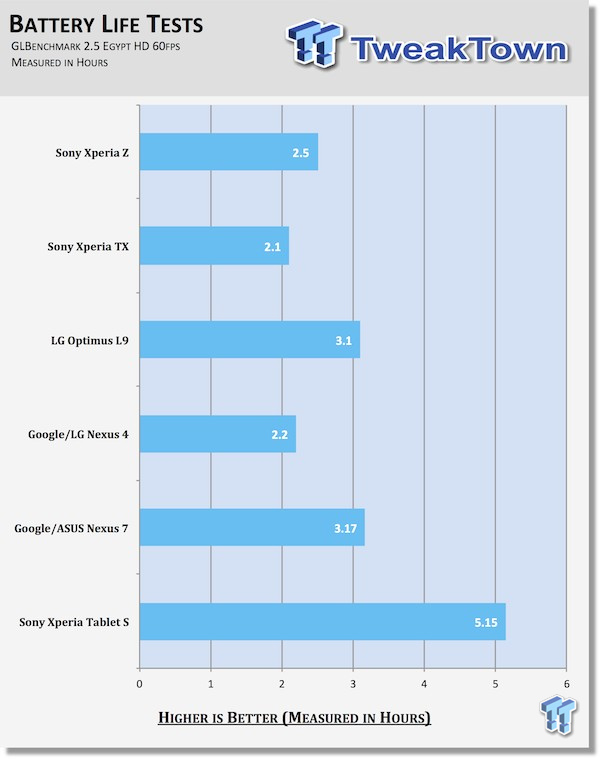 Battery life on the Xperia Z wasn't too bad, but it doesn't set any sort of record. The phone has a slim profile, which means we can't just cram in a huge battery. 2.5 hours under extremely hard benchmarking like GLBenchmark 2.5 Egypt HD 60 FPS is always hard - but it beats the Nexus 4, which only has results of 2.2 hours under this test.

Something I didn't expect with the Xperia Z was to fall in love with it - upon opening it out of the box, I was in love. It looks gorgeous, performs admirably, and does it all without breaking a sweat. Have Sony gone from underdog to a true competitor? Yes, definitely.

Sony have come out with a great device in the Xperia Z, something that is definitely worthy of your money. I would find it hard to believe that anyone could buy the Xperia Z and be disappointed in it, but I think Sony have a little while yet before they have the name that Samsung have in the competitive smart device market.

If they were to sell the Xperia Z for $399 outright and unlocked, and push it heavily in terms of marketing, it could soar. The problem is, Samsung have already got their foot firmly placed into the market, and whoever doesn't buy an iPhone, buys a Galaxy device.

Sony need to change this, and while the Xperia Z is worthy of this, they don't have the same power in the market that Samsung do.

Long story short, should you buy the Xperia Z? Yes, definitely. It's a great phone, and while it's more expensive than the Nexus 4, the Xperia Z has the Full HD display and being waterproof definitely isn't a bad thing. Besides the issues we experienced with viewing angles, there's not much bad to report. 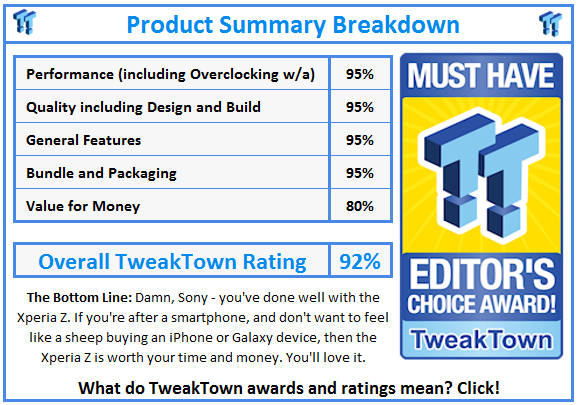