I think it's fair to say that whilst Australia definitely punches above its weight in regards to television, there are very few Australian made films that genuinely add to the Australian experience, stand the test of time and convey our culture and way of life. For every Red Dog and Crocodile Dundee, there's dozens of cheap ass films that served solely to extract a lazy grant from the Australian film council.

It's not much, but Daryl Kerrigan (Michael Caton) is proud of his 'Castle'; the Bonnie Doon property adjacent to an airport he shares with his family. Whilst some might label them as 'bogans', they are quite unaware of their social status and are proud of their lot in life. However, when a property developer approaches Daryl with an offer to purchase his modest property in order to extend the airport, he's prepared to fight them all the way to the high court with his crew of well meaning cohorts.

The Castle is one of the few Australian films so successful that it's had such success that multiple quotes from the script have entered the Australian vernacular, and 15 years on its success continues to provide. The film, made for just $19,000 and lensed in under two weeks, was a massive successful for Working Dog, the production company made up of members of the D-Generation, famous for such shows as The Late Show, and spin-off programs such as Frontline and Funky Squad. The Castle is also noteworthy due to the first feature film performance from a certain Eric Bana.

The Castle is presented in the film's original aspect ratio of 1.78:1, encoded with AVC MPEG-4 compression.

For years, the only available Australian release of The Castle was derived from an ancient VHS master which cropped the original aspect ratio to 4x3 which featured slightly more vertical information, at the expense of the horizontal, deviating significantly from the intended aspect ratio. In 2008 Roadshow released a remastered DVD version from a new master which rectified this. This Blu-ray release comes from that same transfer, with naturally better results.

Filmed with such brutal efficiency, The Castle has never been, nor will it ever be a pretty film, with generally poor lighting, but this Blu-ray accurately reflect the way the film is meant to look. The image is crisp and clear, and with a pleasing amount of film grain.

Noteworthy is that the fact that due to being filmed on 16mm stock, this 1080p transfer is essentially the same resolution as the studio master, with 16mm film equating to around 2K resolution. The Castle is simply not going to look better than it does here. 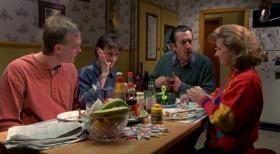 Roadshow have given the choice to view the film with the original Australian audio track, or in conjunction with the orchestral score by Edmund Choi which was produced for the American market. The film works much better without the score in my opinion.

Let's be clear. This is a film that scarcely benefits from stereo to 5.1, let alone from lossy 5.1 to lossless 5.1. Still, I guess we should be grateful nonetheless. Dialogue is rarely a problem to hear, although some of the rushed recording methods leave a bit to be desired. There's very rarely any hint of surround activity in the dialogue heavy feature, but there is some suitable ambience in outdoor scenes, along with some mildly aggressive airplane noises.

Overall, this is hardly anything to write home about, but as far as an accurate reflection of the original elements goes - this is superb. 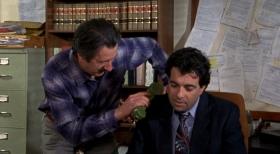 Sadly The Castle does not feature any extra features. This seems to be a deliberate choice of the filmmakers, coupled with a general lack of original materials from the film's production. That said, it's a shame that we don't even get the original theatrical trailer, which is available on the U.S. release DVD. A short featurette on the cultural impact of the film would have been nice too, but alas. 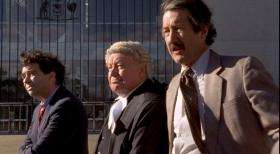