Snow White and the Huntsman had all the elements in place to ensure the film resonated as a worthy re-telling of the classic story, pulling it kicking and screaming into the new millennium; a cast of well known names, a slick visual look and cutting edge visual effects should have created enough goodwill to form a memorable motion picture. But these don't alone make a good film, and mean nothing if not backed up by competent direction, good casting and editing process.

Unfortunately, these elements never truly gel together, leaving Snow White and the Huntsman with a wildly uneven tone, a good villain with a wholly unworthy protagonist, plot points which lead to dead ends, or abandoned completely coupled with a woefully miscast leading lady.

Princess Snow White (Kirsten Stewart/ Raffey Cassidy), daughter of the King and deceased Queen is a kind and good hearted young girl, adored by the subjects of the kingdom and the future of it. But when Ravenna (Charlize Theron) seduces the King with a powerful spell and becomes the new Queen (and stepmother to Snow White), and ascends to the throne after murdering the King, Snow White is locked in a tower and assumed dead to them.

When the Queen requests the heart of the imprisoned Snow White in order to remain forever beautiful, a chance encounter allows her to escape into the nearby twisted dark forest, a local Huntsman (Chris Hemsworth) is summoned to retrieve her, but all is not as it seems as they join forces to overthrow the Queen.

Straight up, the biggest issue with the film is the woeful miscasting of lead Kirsten Stewart, a dour actress of such limited range whom even when the script calls for Snow White to act happy, looks perpetually gloomy. Her casting becomes even more farcical when she is foretold to be the 'fairest of them all', over the beautiful Theron. Stewart genuinely kills every scene she's in, sucking the life out of every frame, capped off by her 'inspirational' speech to the troops at the films finale, yelling words which would fail to inspire my cat.

The film does other things right. Channeling Gladiator and Lord of the Rings, and even a touch of Pans Labyrinth, the production design is sublime, with a gloriously gritty and realistic landscape.

The increasingly prolific and ever-dependable Chris Hemsworth gives a good performance as the Huntsman, even if the script doesn't ask anything particularly nuanced from him, however the standout is Theron, whom clearly relishes her role of the Evil Queen with glee - and that comes through in a powerful performance. She truly is a fascinatingly vicious and unrelenting force, and moreover a significantly more fleshed out character such that when the story alternates from her quest to whatever Snow White is doing, any sense of momentum is instantly deflated. And that ultimately kills the film as a coherent piece of entertainment.

Ultimately, this film won't stand the test of time, discussed with the reverence of Walt Disney's take on the material over 70 years ago. The opportunity was there, but Snow White and the Huntsman isn't a film you will dwell over as soon as the lights go up. 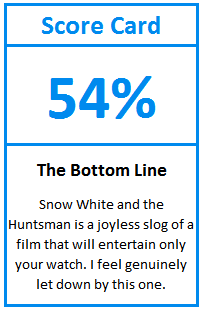