I've long held a slight fear and sense of reverence to the possibility of a force that could, at the very least temporarily, be out of the control of modern medical powers. Whilst the Resident Evil films and 28 Days Later take a post-apocalyptic view which ramp up the horror aspect, it's been some years since a serious cinematic look at a viral apocalypse.

Beth Emhoff (Gwyneth Paltrow) returns from a flight to Hong Kong with relatively minor symptoms. A raised temperature and blurred vision. Within hours, she's dead. A day later, her son also dies and her husband Mitch (Matt Damon) is sent to confinement. All around the world, hundreds and then thousands of people are suffering the same symptoms and quickly the deaths number in the millions. This is a virus with no cure, which can't even be grown in a laboratory in order to create a cure and all the while, society has descended into lawlessness, the world gripped in fear.

Make no mistake; Contagion is one bleak film and it's certainly not for the faint hearted. Whilst the film shuns graphic blood and gore, the scenes of society in collapse are harrowing and truly frightening. 30 minutes into the film I was aware this was not going to be a particularly comfortable film and as the film progressed, this became clearer and clearer. The desperation of citizens queuing for a would-be cure at a chemist and looters destroying deserted shopping centres certainly evokes memories of mankind's worst, especially the London riots of a few months ago.

Director Steve Soderbergh knows how to direct a film with emphasis on coaxing genuine and heartfelt performances from his cast, with films such as Traffic under his belt.

Soderbergh uses a lot of techniques very proficiently, although some may find the editing, which can make large jumps in time, a little confusing.

Soderbergh has assembled a large cast, most of which will be very recognizable to even the most casual of cinema goers. I must admit that every time a new, established actor popped up, it did take me out of the film, albeit briefly. I'm surprised that Soderbergh didn't opt for less known actors, especially for bit roles such as that played by Gwyneth Paltrow. I mean, is the film stronger because of her presence? The answer is a resounding 'no'.

However, I don't want to take anything away from the actors because they are uniformly strong here. With the exception of Marion Cotillard who seems to sleep walk through the role in her normal daze, there is a strong air of believability to the proceedings, especially on the strength of Matt Damon and Kate Winslet's performances.

The production values are incredibly high and although much of the film consists of talking heads and tense dialogue, when the film pans out to show the global distress, you can see where the budget has gone.

The score by Cliff Martinez is extremely minimalist and only features in the film for a few minutes, between scenes. It's also pretty generic and is definitely not going to sell too many CD's.

Overall, it's been a long time since a film has affected me on such a fundamental level. I won't be rushing out to purchase the Blu-ray upon release and I really have no over whelming desire to see the film again for a long time, however this is certainly no reflection on the quality of the film and I'm certainly glad to have seen it. Now, if I could only get some sleep again, that'd be really handy. 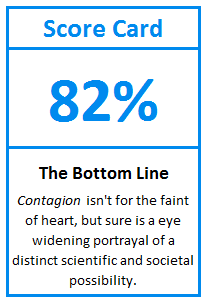