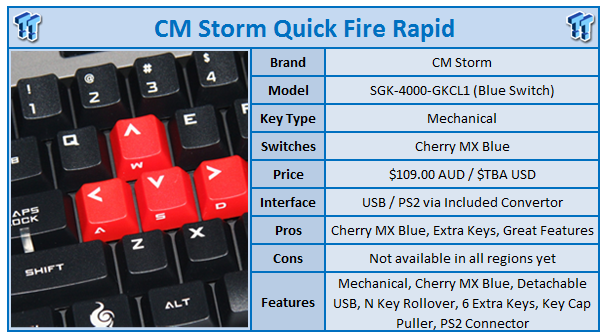 For a long time I kind of felt that if you buy the most expensive keyboard, then you're probably going to be getting the best. For years I found myself exclusively a Logitech man with the latest one being a G19 with that fancy LCD screen. Being quite bored of it and getting sick of the fact that it required its own power, I finally thought I might look for a new keyboard.

Having getting right into watching the competitive StarCraft II scene and hearing how great mechanical keyboards were, I figured I'd take the jump and see what all the fuss was about. Within 30 seconds of owning my DAS Model S Professional, I was convinced it was the best keyboard I'd ever used.

With a new found love for the clickity clack of a mechanical keyboard, the latest piece of hardware to rock up came in the form of the CM Storm Quick Fire Rapid, a company that is a part of Cooler Master, but more focused on higher end gaming gear with the Quick Fire Rapid being the companies first foray into the keyboard market.

Pulling the Quick Fire Rapid out of the box for the first time, the one thing that really stands out above everything else is the complete lack of numpad included on the keyboard. This helps shave a fair bit of size off the overall keyboard and makes for something that looks pretty funky to be honest.

Getting away from the keyboard for just a second, though, we have to look at the bundle. Yes, there's actually a bundle with the Quick Fire Rapid. Apart from the keyboard itself and the normal paperwork, CM Storm has included six extra key caps in the bundle along with a key cap puller.

As you can see above, we've got six extra key caps in the form of an up, down, left and right that can be used to replace the black WASD buttons that are included on the keyboard. Along with that, we've also got two "CM" buttons which can replace the start buttons if you want.

It's probably here when you finally figure out where the focus of the keyboard is. Combined with the lack of numpad and extra buttons that shift the focus to the WASD keys on the keyboard itself, it's clearly designed for those "FPS" gamers. The highlighted keys are a little funky and honestly, when you think about it, when was the last time you really used the numpad as a gamer? The chances are probably quite a while ago.

Replacing the keys is an absolute breeze thanks to the inclusion of the key cap puller; it simply slides over the top of the key, you'll then hear it click in and then it's just a matter of pulling up until the key pops out. It's a hell of a lot nicer than grabbing a pen, trying to angle it in the right direction, pop the key and the duck as it flings out from the keyboard.

While no cable comes out of the keyboard when pulled out of the package, the keyboard is indeed wired with a USB cable. Turning the keyboard over, you're able to see the mini USB port at the back where the cable is plugged in.

Once plugged in, you can then route the cable whichever way you choose. Originally I had it feed to the right as that's where my box is, but I quickly discovered that kind of interfered with my mouse a little bit, so I ended up routing it straight out from the back. If your mouse is on the left or your tower is on the left, though, the ability to path it directly in that direction is nice. 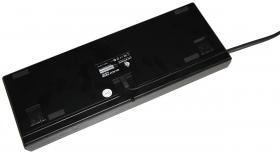 This isn't the first time we've seen a keyboard offer a detachable cable; I'm not 100% sure what the appeal with it is to be completely honest. If for some reason something happened to the cable, you can easily replace it without the need for a whole new keyboard and when transporting it. Also, not having to wrap the cable around the keyboard is nice, but apart from that, I'm not sure. Although I've just realised I've answered my own question I think. 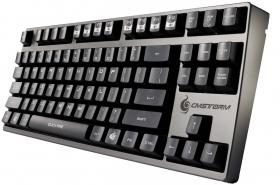 As for "Extra buttons" on the keyboards, there's not too much going on with the only additions being a "FN" or "Function" button next to the right Windows button. Using this in conjunction with F5 to F12 gives us some media controls, while pressing "FN + F9" locks out the Windows button. 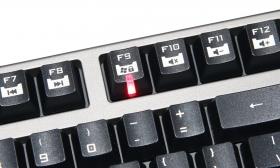 Which leads me onto probably one of my favourite features of the keyboard, the little LED included under the Windows button lock and the "SCR LK" and "CAPS LOCK" buttons. With the area above the numpad normally having the LEDs to indicate if these buttons are on or not, CM Storm have instead thought of a different solution because we don't have that space.

The inclusions of the LEDs on the actual buttons make it a lot easier to see if you've pressed a button, especially the "CAPS LOCK" one accidently. The LED on the actual button is one of my favourite little things on my MacBook Air as it makes seeing if the button is on just a lot easier. The Quick Fire Rapid is of course not the first keyboard to offer this feature either, but it doesn't make the inclusion of it any less awesome.

When it comes to using the keyboard, it's a pleasure. The Cherry MX Blue Switches are considered one of the best when it comes to the mechanical keyboard scene with a large focus on this particular switching being typing. The biggest issue with the Blues, though, are the fact that they're quite loud. The same is seen on my DAS, or any keyboard that opts for the Blue Switches. 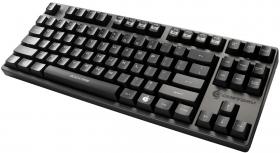 The Browns on the other hand tend to be a little more peaceful with some companies labelling them as "Silent", although "Less Noisy" is probably a better term. They kind of sit between both the Blue and Black. The chances are, though, if you're coming off a non-mechanical keyboard, any switch type is going to feel better than what you currently use.

Originally when checking out keyboards and looking at the different kind of Cherry MX Switches, I thought for gamers the black would be the best option. The thing is, though, the Blues feel really good to game on, and even if you say that you mainly game on your PC, the chances are you do an absolute bucket load of typing as well, be it over like Facebook, MSN or surfing the net. For that reason I think the blues are probably one of the best options when it comes to keyboards.

Black Switches are actually the most rare with few companies offering them; most choose to go with the Blue and Brown. It's interesting to see CM Storm offer a Black switch keyboard and it would be really interesting to see how it went. It seems that the keyboards available are very dependent on the region you live in, so if you're looking at buying one, I highly recommend you check the model code out which we've given you a few paragraphs up.

In the end the Quick Fire Rapid is a really nice keyboard and another great rendition of a Cherry MX Blue switched mechanical keyboard. Unfortunately for me personally, the Quick Fire Rapid couldn't replace my current DAS Professional for the simple reason that my PC is mainly used for work and a lot of that work revolves around Excel and inserting benchmark numbers. The lack of a numpad means that it makes my job a little harder, and honestly, anyone who uses the numpad is going to feel the same way.

The thing is, though, the lack of a numpad isn't a con in the end as the chances are if you do use it a lot, you just wouldn't order one of these. When I went and did some gaming - Dues Ex: Human Revolution and StarCraft II, this keyboard just shined. The lack of numpad just freed up room and really gave me the chance to position my keyboard and mouse in the most confortable way possible.

CM Storms first foray into the keyboard market is a strong one. Unfortunately the keyboard is limited to only the APAC region at the moment, but it's going to expand into other regions soon. Again, though, you want to check out the model numbers before you buy, as you'll want to know what Cherry MX Switch you're getting.

Removing the keypad, adding the LEDs to the back of certain keys, offering the "FN" button that lets you adjust audio levels and media playback and extra key caps along with the key cap puller makes for a really nice mechanical keyboard that most gamers would love to use. If you don't need a numpad, this is one keyboard that should be on top of your shopping list.