It's been a long time coming. A very long time. Whilst it took three movies to get to the epic showdown of Luke Skywalker and Darth Vader, it's taken seven to get to the final battle between Harry Potter and Lord Voldemort. In this final part in the series, Harry Potter and the Deathly Hallows Part 2, Potter (Daniel Radcliffe), accompanied by his friends Ron Weasley (Rupert Grint) and Hermione Granger (Emma Watson), continue their quest to find and destroy the final Horcruxes (physical manifestations of Voldemort's soul) before he destroys Hogwarts and Harry Potter himself.

Harry Potter and the Deathly Hallows Part 1 despite some impressive set pieces, was a slow and meandering film, a slavish fan service to the legions of muggles who eagerly awaited with pitchforks those responsible if their pent ultimate novel was mishandled. But this is first and foremost; a movie. It has to be a compelling visual journey and in this regard I found it left wanting. But it was ok - because Harry Potter and the Deathly Hallows Part 2 was going to be a home run. Right?

Wrong. The first half of the film is agonisingly filled with exposition - every single action and plot point has to be feverishly explained. But it doesn't need to be. After seven previous films, we well and truly get it. The battle scenes, despite some exciting moments are generally slow and small in scope. This should have been the ultimate epic set piece, but it's not. It feels like a small battle and nothing in comparison to other fantasy epics such as Lord of the Rings. And when Harry and Voldemort come face to face, it's over rather quickly and I can't help but feel it's somewhat anti-climactic. One of the ultimate screen villains was essentially castrated before our eyes, the most fearsome and malevolent bad guys reduced to the menace of a mall cop.

The end of the Harry Potter series is a little bittersweet. It seems like every year for the last ten there has been a new film in the franchise - because there almost has been.

The cute child stars of the turn of the last century have grown up, and grown up fast. Whilst many of us have cute (and at times embarrassing) photo albums to chart our growth, these actors have a multi-billion dollar film franchise to show for it. Despite their talent, they'll probably be forever typecast as the wizards of Hogwarts in much the same way that Mark Hamill was, and is forever, Luke Skywalker.

If nothing else, they'll sure as hell have comfortable lives, and like struggling single mother - turned multi millionaire author JK Rowling can afford to rest on their laurels a few lifetimes over. But long after the neon lights of the film series are forgotten and Warner Brothers has scrambled a new franchise to replace it, the series will be in many respects handed back to the bookworms and budding readers that propelled Harry Potter into the tour de force it became. Long live the nerds.

Harry Potter and the Deathly Hallows Part 2 picks up directly where its predecessor left off, with Harry, Ron and Hermione joining forces with old acquaintances to complete the quest Dumbledore left them and to find the answers to long sought after questions. For the uninitiated, it may seem that the film is bogged down by dialogue and exposition, but bookworms will squirm with excitement as subplots and loose ends are tied up one by one, and will be pleased that Director David Yates has done justice to JK Rowling's final novel. However, there are some caveats I'd like to discuss.

Unlike the other film entries, this has also been released in many 3D cinemas as a 'bonus' of sorts, in an attempt to tap into the 3D craze. After seeing the film in both 3D and 2D showings, I feel that the 3D is a nice novelty, but does little to enhance the film except perhaps in one or two brief moments. Once again, the filmmakers have constructed beautiful sets, costumes and CGI that bring life to JK Rowling's descriptions, but the addition of 3D is ultimately pointless and fans will experience the same visual wonderment from either version.

Despite the book given air to breathe over two movie entries, many cherished, delicate emotional moments have been jettisoned and additional alterations were made to make the novel adapt easier to the screen. This seemed somewhat of a letdown as I had expected that the totality of the films run time would have allowed for far more of the books subtleties to shine through, compared to its predecessors. In conjunction with the cinematic dead air of the predecessor, both films could have been condensed into one feature without too much additional pain, although I concede that Warner Bros were probably keen to extend the film out for obvious financial reasons.

That aside, David Yates and crew have done well to stay true to the ethos of JK Rowling's words during the most pivotal scenes in the book, which will likely please the hardcore fans, as well as creating a visually dynamic and emotionally compelling film in its own right. Now the series is complete, the story of the boy who lived can be forever passed on to future generations and like Rowling herself said at the films premiere, "whether you come back by page or by the big screen, Hogwarts will always be there to welcome you home." 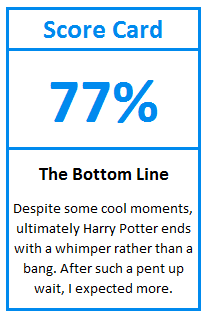