Right around the same time I was asked to take a look at the new KUHLER line-up, I was told of this new thermal paste Antec had been working on. I was asked if I would like a sample to test out and hopefully be able to show you that there is something to be said for the diamond pastes I have heard about, but had yet to test. Of course, I said yes to the offer, and finally I have the opportunity to bring you what I received and what the results of the testing are. 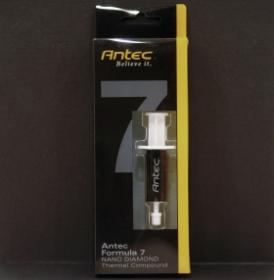 
Diamond based pastes aren't really news. I have seen the IC7 paste on the market and elitists were buying diamond powder and mixing it with high grade TIM already on the market. While the professionally mixed IC7 has had great reviews, the home brew results were, well, mixed! 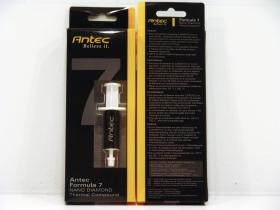 Antec has stepped into the thermal compound game with both feet this time. This isn't the ordinary non-curing, non-capacitive, non-conductive thermal paste. It uses the benefits of the second most heat transferable substance known to man currently, diamonds, and twice the concentration of diamond than other, lesser diamond compounds. Not only that, the new Formula 7 compound can be used in any temperatures ranging from -50°C to 250°C. While it doesn't cover LN2 users, this paste will suffice for everyone else's needs. 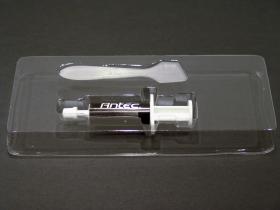 Inside the plastic outer packaging you will find both the 4 gram tube of Nano Diamond Thermal Compound and you also find a spreader or spatula for spreading the TIM, both secured in an inner tray. It isn't all just about a pretty package; the inner tray not only lines up the compound for a view through the front of the package, this tray keeps the spreader locked in place and keeps the plunger in the syringe from being pressed on during shipping. 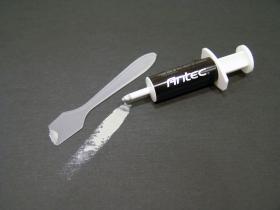 The paste is thick compared to a lot of compounds I am used to using on a daily basis. It actually reminds me a lot of the Gelid compound in thickness. What I have come to find out with some use and quite a few test passes, is that to get the perfect amount across the processor, you need to use the spreader. Using a fingertip will result in a lot of paste on your finger and nothing left on the applied area.

With all compounds I tested, I used multiple application methods and a few passes of each method to establish a much better average of temperatures for each compound.


Since our last round of thermal paste tests, I have changed my cooler selection many times. While I won't repeat all of the compounds, I did bring a few back from the old list to try to compete with the Formula 7 compound Antec has sent me. For this test I dug into the box and pulled out a few of my samples. The winners are; Noctua NT-H1 paste, Gelid Extreme, Arctic Cooling MX-2, and of course our standard, Arctic Silver 5. 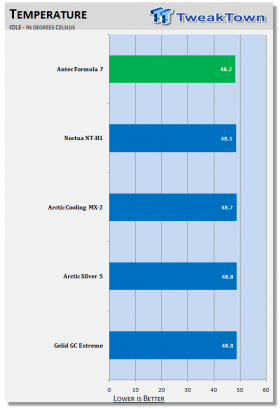 With the efficiency of the NZXT HAVIK 140 I tested this with, I have to say that the idle temperatures reported were all very similar; that is until I used the Formula 7 Nano Diamond paste and actually saw a loss of temperature, and we're not talking just a tenth of a degree. 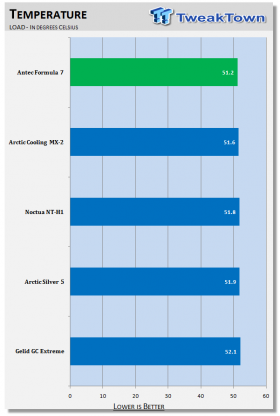 At load, all the temperatures were pretty level except the half a degree over the next best in load testing and almost a full degree better than the worst compound tested. I know I could have shown this with a stock cooler and brought the temperatures higher to establish larger gaps between the compounds. While it will exaggerate the point of the Formula 7's win over the competition, I wanted to show a more real life application, and that is why I used a very efficient cooler for the testing.

Now, depending where you shop, you will be able to find the Formula 7 Nano Diamond Thermal Compound for, at the low end, around $15 shipped, and at the extreme high end, running over the $30 mark. If you have a super efficient cooler, the price may not warrant the degree or so gains you will get, but with lesser coolers the compound will definitely show its prowess and offer you up to a few, meaning three or so degrees, off of your current temperatures.

For those looking for every advantage to getting the last megahertz out of their CPU, this may be just what you need! 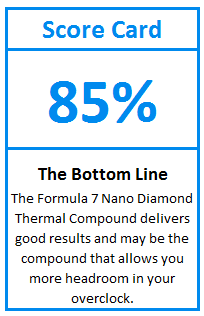