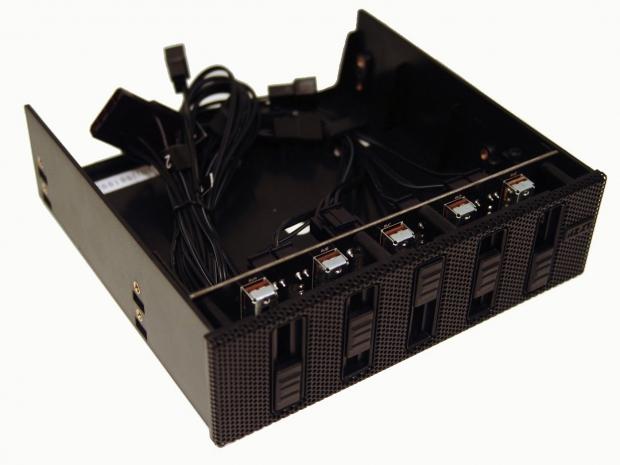 
The Sentry name has hosted quite a few fan controllers from NZXT. From what I can recall, the Sentry 1 was pretty hip for its time. It had an LCD display and some shiny chrome buttons, but only controlled two fans. As time went on, there came the Sentry 2. This time the LCD was touch sensitive and accommodated five fans. Both of these units were made to fit a single 5.25" bay and offer users plenty of fan control behind the solid steel face plates. There was a dual bay model, the Sentry LX, and the stand alone LXE that both offered aluminum faces and large LCD displays. It seems they have all your fan cooling options covered for a clean looking fit in any case, or do they?

NZXT says no and offers up yet another variation on bay mounted fan control. This time NZXT takes good things from all the other controllers, minus the LCD screen, and gives us a new controller with a facade more fitting to chassis designs that have been showing up across the board from many manufacturers. NZXT made sure not to miss out on the opportunity to fill the void and offer a well priced and attractive looking solution to users with cases with mostly mesh front bezels.

The controller in question is the NZXT Sentry Mesh five channel fan controller that we are just about to take a look at. NZXT offers simpler looks and functionality than the last submission of the Sentry LXE. Gone is the LCD screen, gone is the brushed aluminum front plate; it has been substituted for a mesh front with small round holes to match a lot of the newer cases out today. On top of that, this controller can handle an astounding 30 Watts across the entire unit; much more than any of the previous releases.

So, not only did NZXT come up with a stylish addition to mesh fronted cases, they also deliver a ton of power and all in a very user friendly and easily manageable system.

The NZXT Sentry Mesh five channel fan controller is made to be housed in a 5.25" bay in any case. Due to the Mesh part of the naming, you are right to assume that the face of this controller is made with a steel mash plate covering the mostly ABS plastic body and fame. Both the Mesh and the plastic tub are black and NZXT carried this coloring right on to the cables to make it easy to hide inside of any chassis. The five separate channels are adjusted with a slider. On the bottom the fan controller produces between 4.68V and 4.70 depending on which line I was measuring. The top end of the slider delivers between 11.88V and 11.95V, again depending on which of the five 3-pin fan power leads I was using. Speaking of power leads, the Sentry Mesh comes with a long 4-pin Molex adapter to give the fans and the controller its power, totaling 30 Watts across the units five channels.

Going a little deeper in detail, the unit ships with its own set of mounting screws that match the threaded inserts set into the plastic frame of the unit. I mentioned that they deliver the Sentry Mesh with all black wiring. Continuing in their detail, they are each 27" long and will give you the ability to connect fans in even the largest of cases. The Molex connection is at the end of a 26" lead, and again gives you plenty of line to hide this connection too. While all of the wiring runs under a latch of sorts to keep the wiring near the motherboard tray, NZXT also adds a wire tie acting as a strain relief just in case you try to pull the wiring too far while making all the connections. This will keep you from accidentally damaging the PCB of the controller or just as bad, destroying a fan header.

Pricing for the NZXT Sentry Mesh has been posted just about everywhere. NZXT has set a MSRP of $24.99 in the US, and to be honest, I paid close to that for a used controller which arrived with a few dead channels. In my mind the pricing seems to be shot on! The only issue at the moment is that while I type this there aren't any retailers showing stock of this controller yet. With the release of this fan controller being just the other day, I expect these to be hitting stores soon, as I'm sure they are shipping in quantity as I bring the Sentry Mesh to you in this review. Just double checking with Google, I was right! The only hit I got was for Xoxide.com with MSRP pricing, but they aren't in stock at this time!

The Packaging, Accessories and Documentation 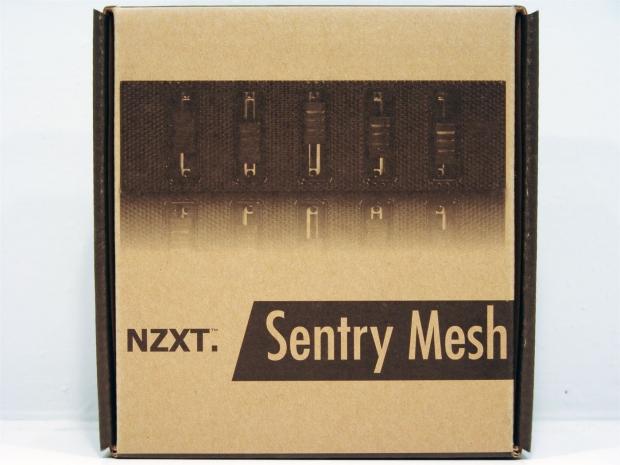 Packed in a plain brown box with black screen printing, NZXT offers a grainy image of the fan controller and the naming at the bottom. 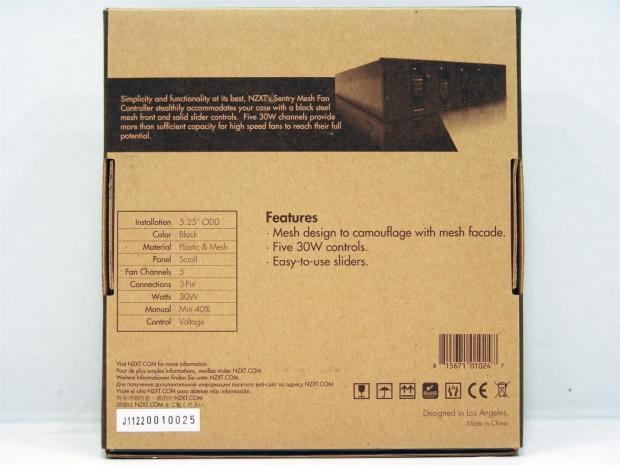 On the reverse, the black screening covers the brief statement at the top, the specs on the left, and the features on the right. 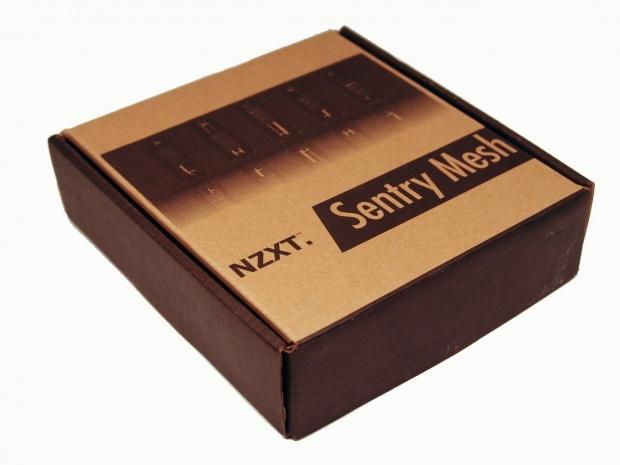 The sides of the packaging are just screened black and offer no information. 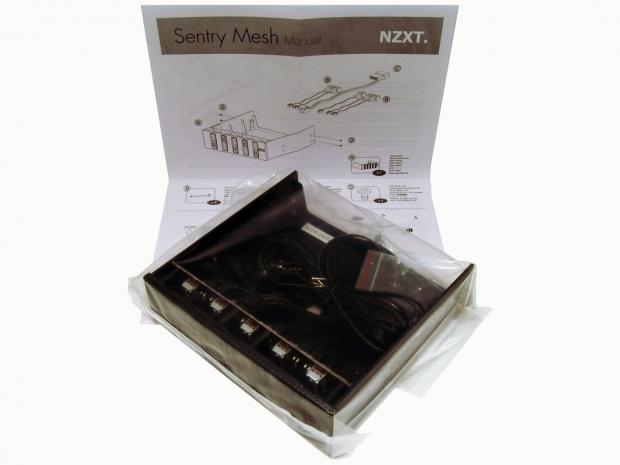 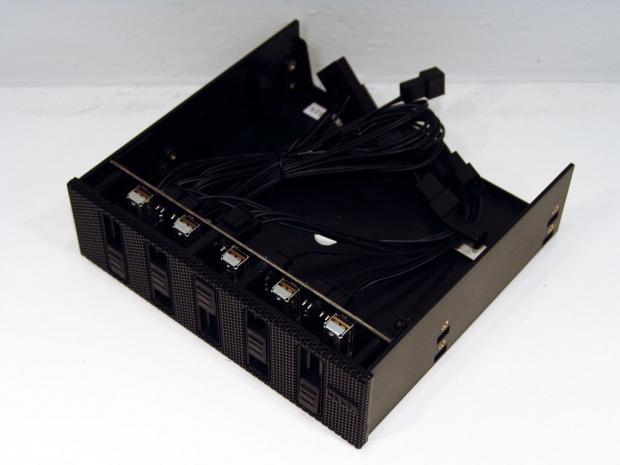 When I removed the plastic wrapping I found the wiring all tied up and tidy behind the fan controller. Most of all, I noticed the small round mesh used to cover the face of the unit, and it will go well with quite a few of the cases I have reviewed already, not to mention those still in production. 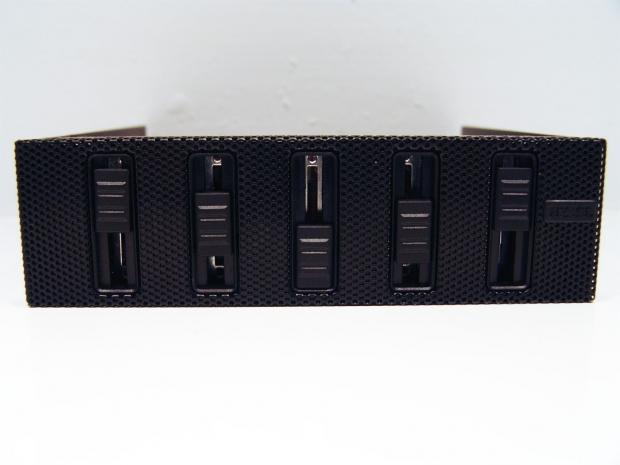 There are five sliders to adjust the fan speed for each of the five channels of the Sentry Mesh. The left slider will give a fan right around 11.93V average, while the third channel will provide about 4.7V in its current position. 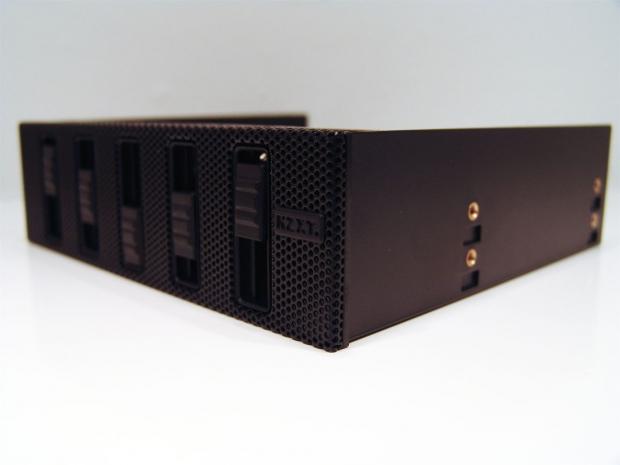 Looking at the Sentry Mesh from this angle, I could show off the little logo on the face plate much easier. 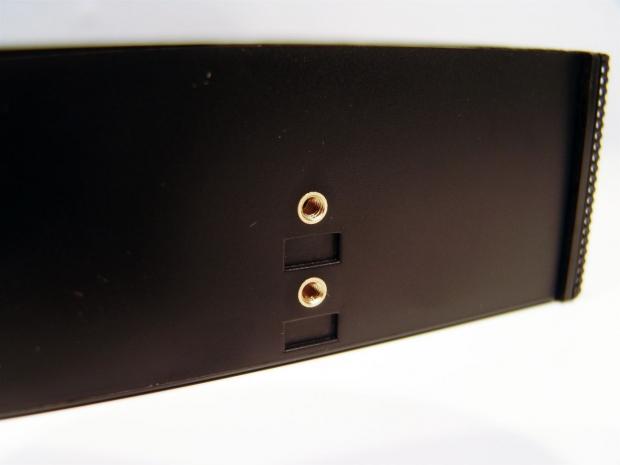 These brass inserts, eight in total around the controller will allow for a snug fit in your case, while also not depending on the plastic to keep the threads over time. This will ensure a secure fit for a long time to come. 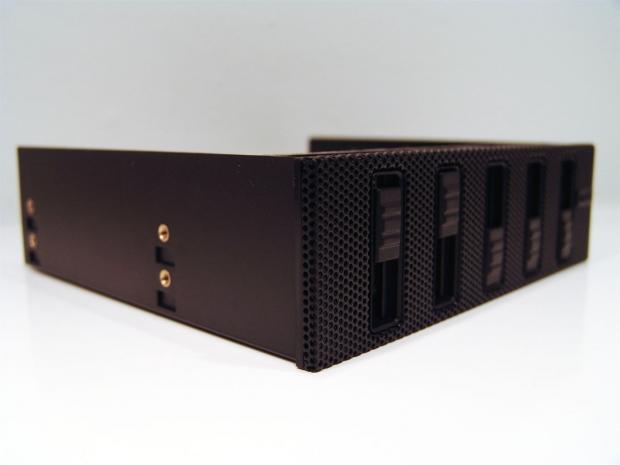 Looking at the left side, you can see there is the matching set of four brass inserts as the right side had. You can also see that they made sure to wrap the edges of the case on this unit. Taking that extra step makes for a much better finished product. 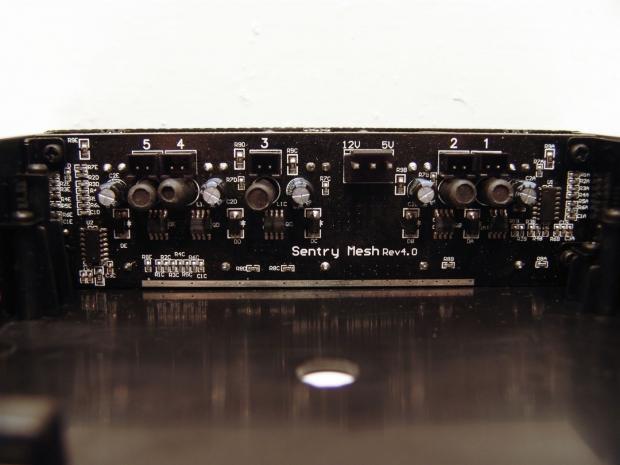 Behind the scenes I removed the wiring to allow you a much better view of the PCB and its components. There is an easy to follow layout of the 3-pin fan connections and the larger 3-pin power plug. 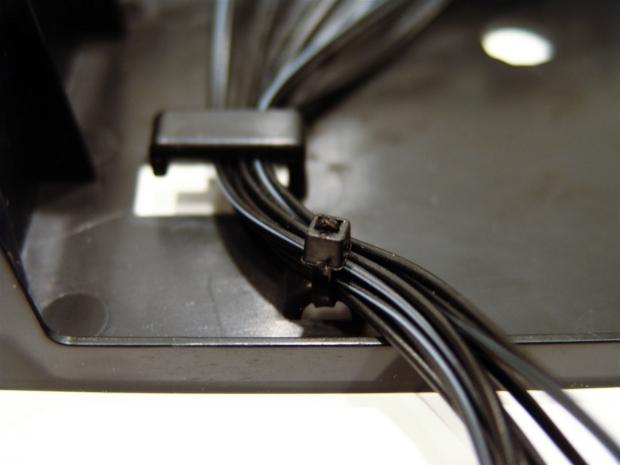 At the point at which the wires leave the unit and enter the chassis, NZXT has not only wired them behind a clip to keep them in place. They also offer a pre-installed strain relief for these wires. 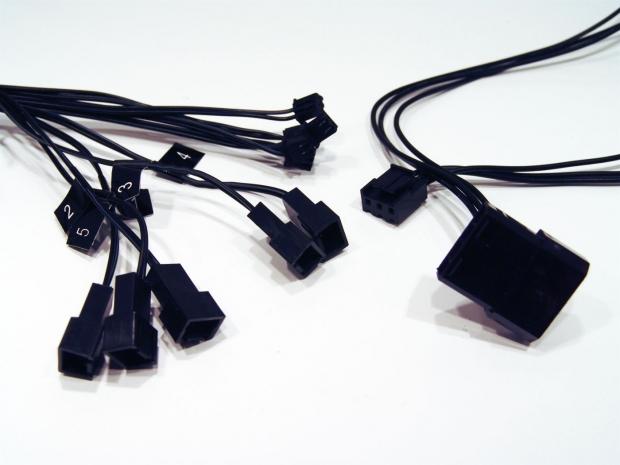 Since I was already removing the wiring, it seemed the logical time to cover the connections. On the left are five 3-pin leads that supply the fans with power and are labeled 1 through 5. On the right is the 4-pin Molex to 3-pin power adapter to supply the Sentry with its power. 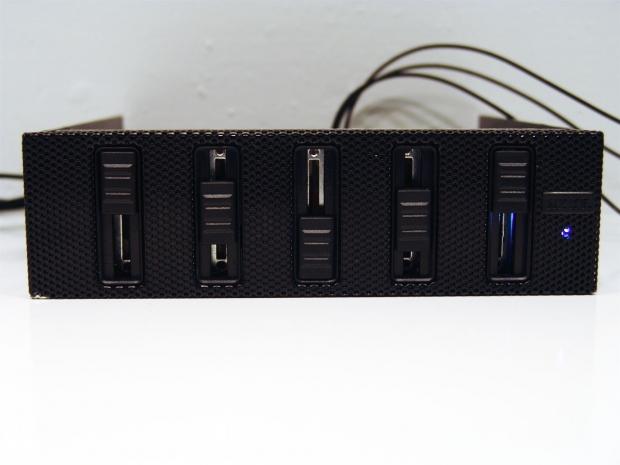 While the unit was going through voltage testing, I am pleased to say that there is only a simple white LED on the right to notify you that the unit has power. While this unit is very nice to look at, I find the lack of bright LEDs across the panel very appealing.

While I really wish I would have brought you an image of the unit installed, I don't currently have a chassis with this type of front bezel. Rather than taking a ribbing for giving you an image that just detracts from the mesh face of the Sentry, I figured I would pass it by and leave you to hunt Google for that image. I do know that if I had the Cooler Master 690II, BitFenix, or a few other manufacturers cases, this would make a great addition to those, and I didn't even cover the Vulcan, Phantom, Panzer Box, or M59 just to name a few from NZXT. Even if the hole sizes aren't a direct match from the other manufacturers, this leaves you a much better looking option over brushed aluminum or a solid steel face plate.

During testing I found the Sentry Mesh more than capable of powering five usual suspects in fans. I even went ahead and threw in a couple of high draw Delta and Scythe fans designed for servers. You know the ones, the fans that at full power can almost levitate and hover over a table. The Sentry Mesh took it all in stride. I will say that the low end of the spectrum for the sliders might not be enough power to use with a lot of fans, as most of the fans I get with coolers don't want to run with less than 7V, it leaves some fans stopped in their tracks. As long as you don't overlook making sure your fans are capable of dropping to just under 5V of power and still running, you will have little issues getting this unit installed and wired up. In fact, the only negative note I have about the NZXT Sentry Mesh I received is that the center channel is "sticky" in travel near the center of the sliders path. Even with this slight "issue", the controller still functions perfectly on that channel as well as the other four. With a new high in power rating, NZXT covers almost all fan control needs with this 30 Watt unit.

Like I mentioned before, I had to get some fan controllers for the TEC test box, as the one Chris installed finally gave up the ghost and died. To replace the controller I looked around for the best deal for what I could find and ended up with some used unit that cost me nearly the same price as the Sentry Mesh is suggested to retail for. While this controller may have a more specific use into which case you would want to use it with, it isn't going to rake you over the coals to get a matching piece of hardware. NZXT has set the MSRP of $24.99 in the US, and xoxide.com has the jump on pre-orders right now! As with anything from NZXT, I see them flooding the shelves soon, and you should be able to find them both online as well as in the larger "box stores". 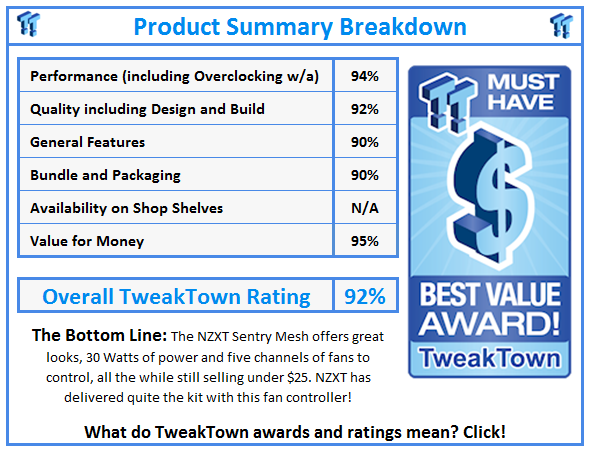