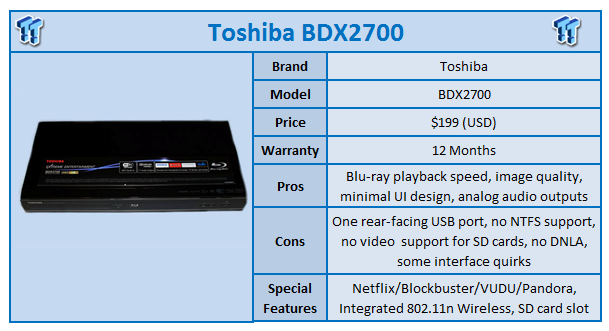 Toshiba was once a major player in the two-year long "High Definition Wars", pitting the HD-DVD format against Blu-ray disc. With fans in each camp, the ultimate fate of HD DVD came about when manufacturers began dropping support for that format and switched over to releasing movies on Blu-ray alone, thus cutting HD-DVD off at the knees.

Though the format still lives on today in used movie stores all across the country, Toshiba eventually dropped all support for their competing format and began releasing Blu-ray disc players of its own.

The BDX2700 is a replacement to Toshiba's first generation Blu-ray player; the BDX2000 (released almost a year ago) and is the current top of the line player (the BDX2500 is a cheaper version which lacks built-in wireless connectivity). The BDX2700 is a "basic" Blu-ray player, which is perfect for those who are upgrading from the straightforward DVD disc players and are confused by the myriad of connectivity options and "apps" that are required for so many consumer electronics these days. Video connections are the typical HDMI, component and composite, while the audio side of things drops the coaxial connection in favor of full analog connectivity (in the event that your sound system doesn't decode the Blu-ray lossless audio codecs).

Software-wise, the menu screen is minimalistic in design, which is a refreshing change of pace from other media/optical disc players that try to cram in as many options as possible. The interface isn't very elegant, but it gets the job done and is simple to navigate. 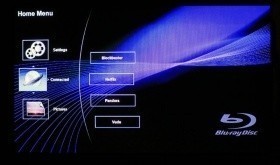 Online streaming services are also kept to a minimum with the "big four" of Netflix, Blockbuster, VUDU, and Pandora. The Netflix interface is exactly like that of the other players I've encountered that offer that service, though Pandora apparently allows its look and feel to be mixed up a little. Quality of both services was excellent through the 802.11n wireless connection. 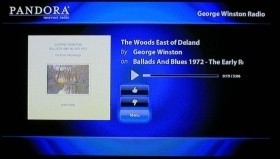 Blu-ray disc playback was actually quite good. This was the first Blu-ray player I've encountered where the Blu-ray discs performed at speeds that reminded me of DVD. The problem with many BD players has always been that the discs themselves take longer to load than their standard definition cousins, a trade-off that's always been somewhat acceptable given the increase in video/audio quality. With the BDX2700, however, Blu-ray playback felt "snappier" in performance, especially in menu loading and chapter skipping.


Visual quality from the Blu-ray discs I tested was uniformly excellent, though the player itself has a slightly noticeable high pitched whine emanating from it on startup and then again whenever the optical reader is in use. You have to be fairly close to the player to hear it, and in practice it wasn't noticeable during movies, even in the quieter moments.

A solid performer for the Blu-ray discs it was engineered to play, and yet the BDX2700 has a few glaring flaws in other areas. The first is no front-facing USB port. Reaching behind the player to plug in a USB drive is quite an annoyance in practically every setup I can think of. The second is no NTFS support. This is an absolute must-have if you have any MKVs in your collection (which routinely climb to the 4+ gigabyte mark or more depending on the resolution you ripped your Blu-rays to) or if you simply like to have a large hard drive (1TB or more) hooked up for the convenience of accessing all of your media files at once. The only way I could play any media was through a FAT32 formatted USB stick, which limits how many files you can have at once, or how large of a file you can play back through the player. This could have been alleviated if the player supported DNLA for streaming from a desktop or laptop computer, but, alas, no such support exists.

A third flaw is the SD card reader. It's a nice little feature that I was excited to play with given that I shoot a lot of HD video to SD cards, but for some strange reason you can only view photos off an SD card. The "Video" menu option simply doesn't appear. This seems like an easy fix via a firmware update (the video files themselves are H.264 QuickTime files, so they should already be compatible), but the fact that the video option is missing is quite baffling.

Another issue I have with the SD card reader is in viewing photos. Selecting a photo you want to view causes the player to immediately highlight the "Previous Folder" option. A few seconds later the photo will display. This is very confusing because it makes it seem like the player wasn't able to show the photo for some reason and before I realized what was happening, I would start to navigate again and then have the photo suddenly pop up. Even if you know to wait those few moments to see the photo, you still have to navigate off of the "Previous Folder" option and back over to the photos themselves if you want to continue browsing. This is poor interface design and, coupled with the inability to play videos from the SD card, makes the slot more of an oddity on the player than the useful add-on that it should have been. 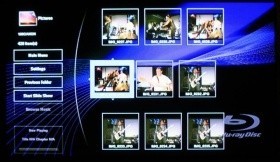 Ultimately, this player feels like it was fine-tuned for Blu-ray playback to the detriment of everything else, leaving the other services and offerings the short end of the stick. If a solid, speedy, low frills Blu-ray player is what you're looking for, then the Toshiba BDX2700 should be a player to consider. Other than that, if you consume your media in ways other than straight Blu-ray/DVD discs, there are other players out there that offer far more options.