All NewsBusiness, Financial & LegalCases, Cooling & PSUContests & GiveawaysCPU, APU & ChipsetsDealsDisplays & ProjectorsGamingMotherboardsScience, Space & RoboticsStorageVideo CardsVirtual & Augmented Reality
All ReviewsAll ArticlesAudio, Sound & SpeakersCases, Cooling & PSUCPUs, Chipsets & SoCsComputer SystemsDisplays & ProjectorsGamingMotherboardsNetworkingPeripheralsStorageVideo Cards
GuidesGamingAsk the ExpertsNewsletterAboutForums
RTX 3090RTX 3080RTX 3070RTX 3060HDMI 2.1Bitcoin MiningBattlefield 6Fallout 76 2021
TV, Movies & Home Theatre
Blu-ray Movies
After a nervous wait, The Fellowship of the Ring proved that the army assembled in New Zealand did in fact know what they were doing, delivering a smash hit that not only resonated with the general movie going public keen to delve into a make believe world far from the horror of 9/11 a few short months previously, but also with the legions of literary fans whom were no doubt waiting to board flights with pitchforks in hand.

With a decidedly confirmed sense of confidence and more post production funds unleashed, Peter Jackson and co delivered the second installment in the trilogy The Two Towers one year later.

Frodo Baggins (Elijah Wood) continues his journey to Mount Doom with his trusted companion Samwise Gamgee (Sean Astin), separated from the fellowship whom were entrusted with Frodo's safety and reeling from the death of his friend Gandalf. The journey becomes all the more difficult with the revealing of the treacherous Gollum (Andy Serkis), a previous owner of the Ring; deformed physically and mentally by its power. The Ring also continues to become a psychological burden for the hero.

Of note is that the versions initially presented on Blu-ray are the original theatrical versions and not the longer extended editions which are available on DVD. This has upset many fans, especially some who feel they are being taken for a ride by being 'forced' to purchase two versions.

Some perspective is necessary. Director Peter Jackson has always said that these versions are his director's cuts, the versions he set out to make. The theatrical versions may be slightly condensed, but this was the world's introduction to the films and the winner of multiple academy awards and should be preserved on Blu-ray disc. 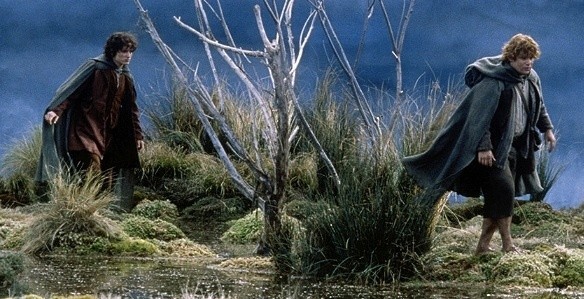 The Two Towers is presented in a widescreen aspect ratio of 2.40:1.

Whilst I made a note of mentioning expectations in my review for Fellowship of the Ring, it is a fact that the video transfer for The Two Towers fares slightly better. Digital noise reduction seems to be less applied and the image just a tad sharper as a consequence. Color balance is particularly good, but slightly darker than I remembered the film to be. However, I checked the old DVD and it is indeed the same opacity. The print used is particularly clean, with nary a blemish to be found.

Overall, similar to Fellowship there are a few nitpicks, but again it's a massive improvement over the original DVD, especially the region one NTSC version I previously owned.

What an aggressive track. With each successive movie the action ramps up and the audio mixers don't give up an opportunity. The battle of Helms Deep at the climax of the film is one of the more memorable times of late in my home theatre. Bass is mixed incredibly low and was probably just a little too powerful for my reference settings. Audio sync is fine at all times despite how much was re-recorded after the fact.

Again the audio score by Howard Shore is a true delight, a wholly appropriate and engaging soundtrack that ranks up with the best scores ever produced.

Overall, just like Fellowship a massive improvement over the DVD; you'll not be looking back.

The U.S. release of the Blu-rays has also included a second DVD of content, the same disc of extra features from the theatrical cut DVD. Village Roadshow have not included this disc, so true Lord of the Rings fans will want to hold onto the DVD if only for that.

What we do have is four Theatrical Trailers, all presented in high definition and a trailer for the game Aragorn's Quest in standard definition.

Overall, a pretty disappointing collection of extras. It would have been nice of Village Roadshow to include the DVD disc of extras like the U.S. release. Still, we know this will be revisited, probably multiple times in the future. 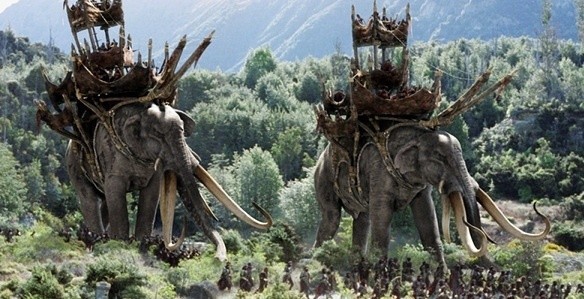