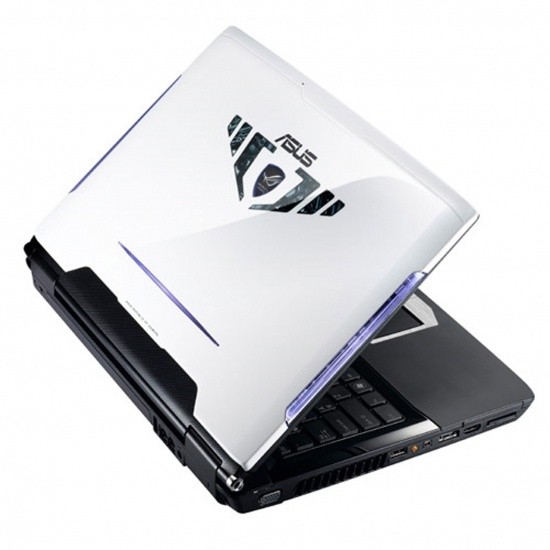 
Back again with a new notebook and this time we are checking out the ASUS G51VX gaming notebook. It is a very nice change of pace to see a full on gaming notebook sitting on my desk rather than another netbook. ASUS is certainly more known for its netbooks than anything else, but the company knows how to build a nice gaming notebook, too.

As long as a gaming notebook can be carried to and from the LAN party without giving you a hernia, gamers are usually OK with the size of the machine. You have to make compromises with any gaming notebook; they are expensive, loud and lack power compared to gaming desktops. However, for certain users the gaming notebook is the way to go. If you are that type of user, the ASUS G51VX I am checking our today may be exactly what you need.

The ASUS G51VX-A1 I am reviewing today can be had in white or black colors. My test machine was fitted with the basic 6-cell 4800mAh battery.

The notebook I am reviewing is available at several online retailers including Amazon for about $2,700. Check out the full specifications below. 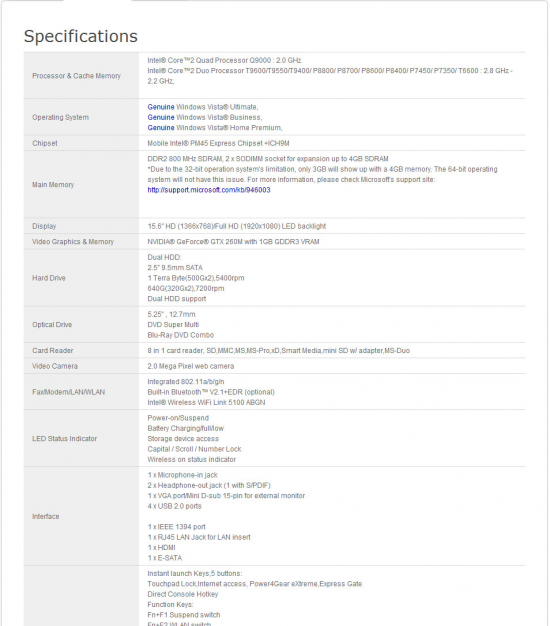 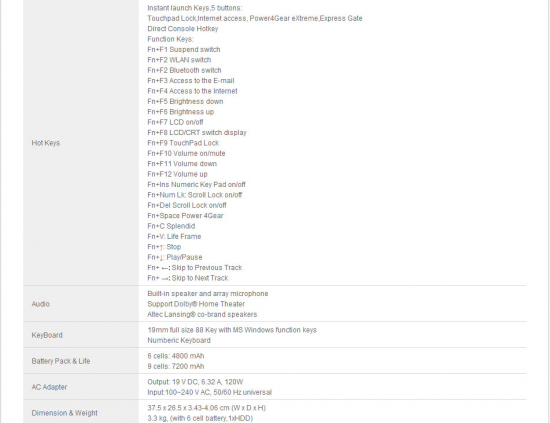 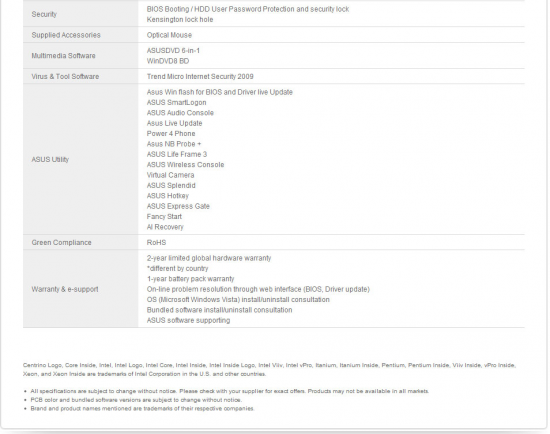 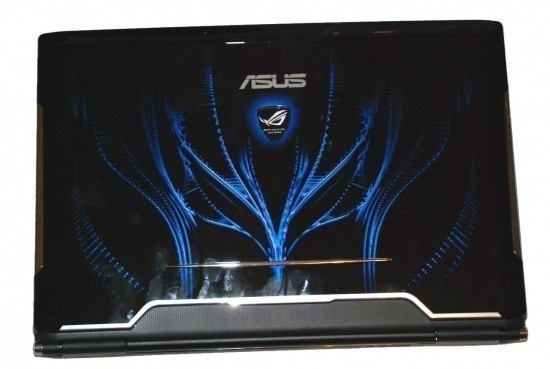 The top of the notebook lid has some cool graphics and lights up with blue LEDs. The effect is very cool in a dark room, making the notebook quite a looker.

The backside of the notebook has the Kensington lock port, a single USB 2.0 port, modem jack, RJ45 port and the power adapter plug.

The right side of the notebook has the optical drive, two USB ports and inputs for headphones, mic and line in.

The front of the notebook has a few LEDs and the switch that turns the WiFi radio on or off.

The left side of the machine has the VGA out, USB port, antenna, FireWire, eSATA and HDMI out. This side has the memory card reader as well. 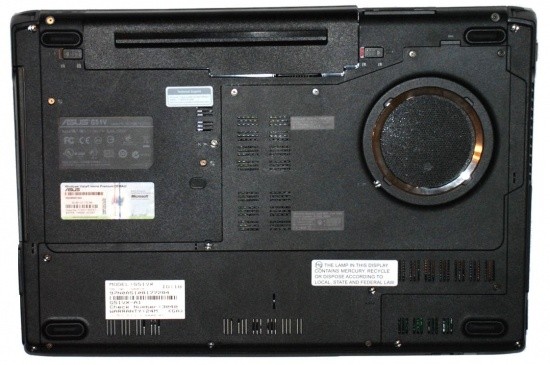 The bottom of the notebook is dominated by the single large subwoofer and the doors and cooling grates we expect to see on a notebook. 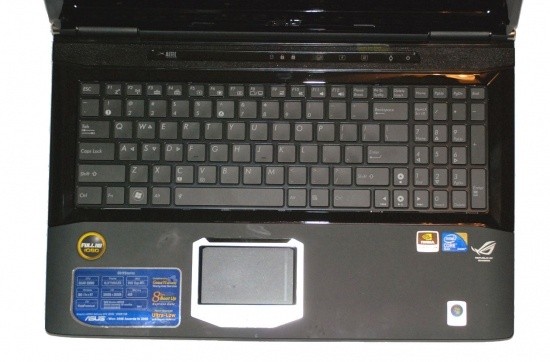 The keyboard on the G51VX is fantastic. It is a chicklet style keyboard that is backlit with white LEDs. 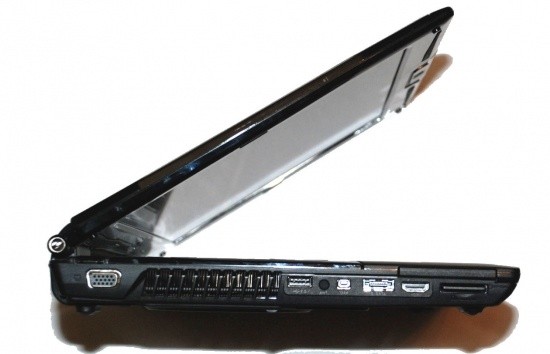 The notebook's profile isn't exactly thin, but it's not too big either. This machine is of common girth for a gaming rig. 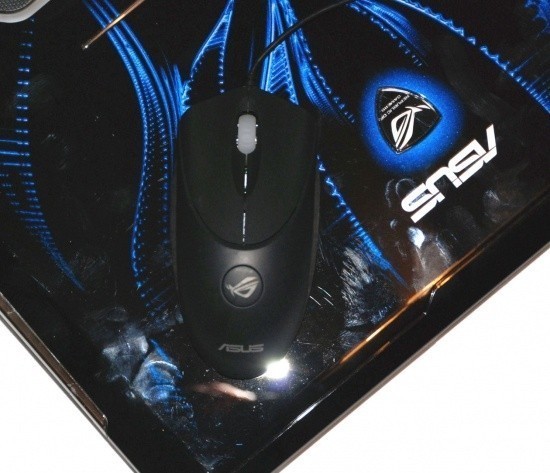 ASUS was nice enough to ship the notebook with a good Razer gaming mouse. 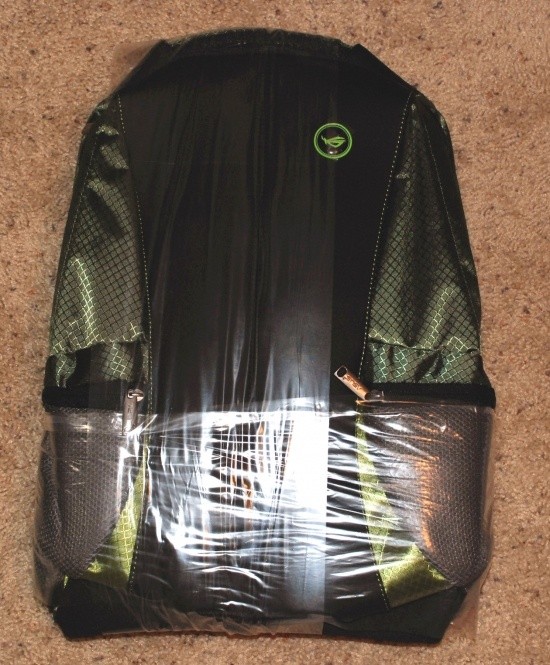 When you spend almost $3,000 on a gaming notebook, you expect little extras. ASUS bundles a notebook backpack with the notebook, which is a good thing considering how large the beast is.

Now we get to jump into some benchmarks for the G51VX notebook. Since this is a gaming machine, I will get to do my Crysis test and 3DMark Vantage along with my Movie Encoding test, Battery Eater Pro and iTunes encoding test.

Battery Eater is particularly harsh on notebook batteries. As always, your mileage may vary. The maximum performance test was run with no power saving features turned on and the screen set to 100% brightness. The max life test was run at the same settings, but the screen was set to 50% brightness.

Check out the chart below for the results. The battery life was atrocious, not that I expected much battery life from a quad-core gaming notebook. 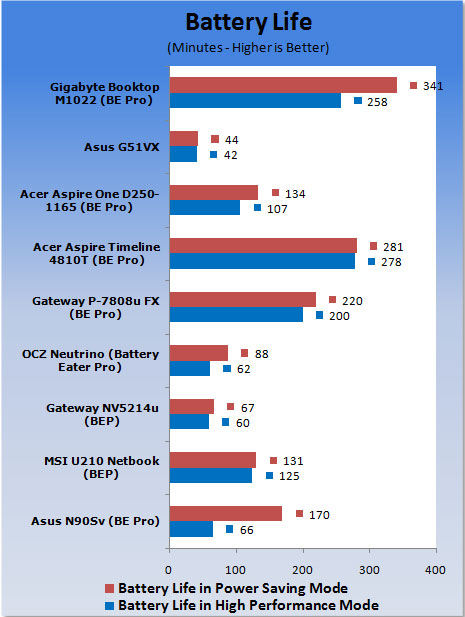 For my iTunes encoding test I take the Stone Temple Pilots Core CD in MP3 format and use iTunes to turn the tracks into AAC format and time the process. The G51VX laid down the best time we have ever recorded on this test. Check out the chart below. 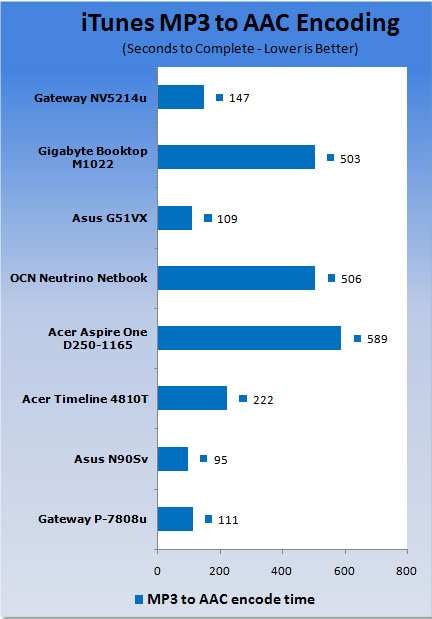 Next up is my movie encoding test where I take Windows Media Encoder and the Microsoft Magic of Flight HD video and encode it from HD to DVD quality with CD quality audio. The G51VX again turned in a very good time, only two seconds slower than the top performer in this test, the Gateway P7808u. 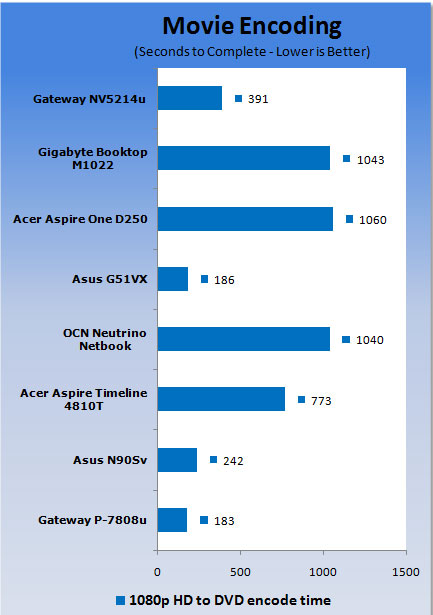 The next test up is one we haven't seen in a while with all the netbooks I have been testing. I was able to put the G51VX through the 3DMark Vantage benchmark. The notebook did very well. Check out the chart below for the results. 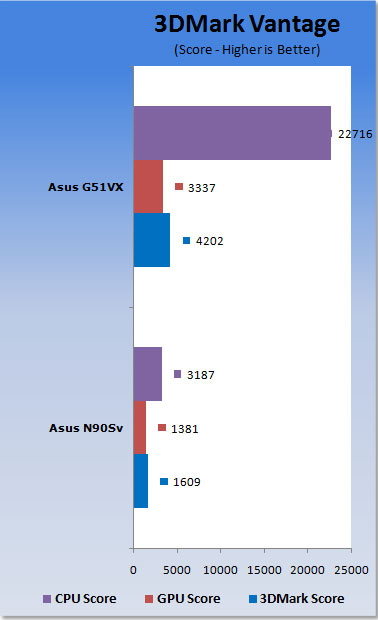 The final benchmark for the G51VX is with Crysis. The notebook did very well, but was bested in the gaming test by the much cheaper Gateway P7808u gaming notebook. Check out the chart below for the results. 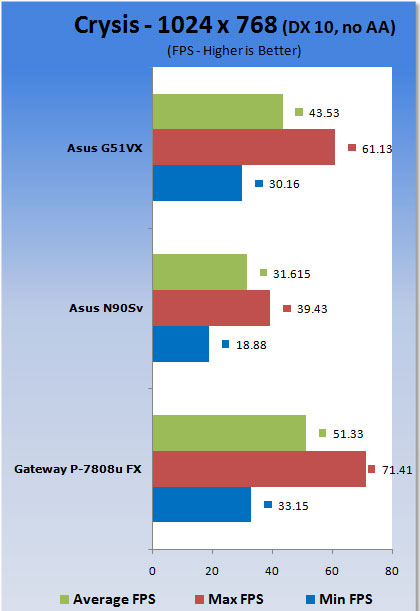 Benchmarks only tell one part of the story when it comes to notebooks. The machine can burn up the benchmark charts, but it sucks when it comes to working and living in the real world. Thankfully, the G51VX is equally at home in everyday use as it is in playing a game of Crysis. After spending so much time with netbooks, the 15.6-inch G51VX seems gargantuan to use. The keyboard is my favorite part of the entire machine. It has smooth chicklet style keys backlit by white LEDs and the thing looks fantastic. The keyboard isn't all bling, though, it also has good typing feel, tons of function and multimedia keys and a full size number pad.

The track pad is very good as well with all the accuracy that you expect from a track pad, which for gamers isn't much. The buttons under the track pad are covered in aluminum and look fantastic. They have good feel and feedback and you can use them for gaming in a pinch. ASUS also bundles the notebook with a real gaming mouse from Razer; no cheap imitations here.

The screen of the G51VX is large, bright, has good color reproduction and works very well for gaming and for watching movies. The thing has gobs of glare, but we should all be used to glare with notebook screens today. Matte finish screens are rare. ASUS didn't scrimp on the sound system for the notebook either.

The bottom of the machine has a large subwoofer that takes up a large section. You aren't going to get massive levels of bass, but the bass you do get is head and shoulders above what most notebooks offer. The sound system has plenty of volume and you can easily hear your games and movies without resorting to headphones. ASUS also includes a very nice notebook backpack with the G51VX for carrying it, your gear and whatever else you can cram inside around with you.

When all the dust settled, the ASUS G51VX is a very good performer, easily hitting the top of the class compared to other notebooks I have tested. One of the machines weakest points is its battery life, which is not even an hour in my benchmarks.

The real problem I have with the G51VX is its price. At nearly $3,000 the machine simply doesn't offer the performance to justify the price when compared to the sub-$2000 Gateway P7808u. When you are talking bout a $1,000 price gap between the two machines, the Gateway P7808u stands out.

ASUS crams lots of performance into the G51VX, but it crams a big price tag in there, too. At about $800 less the ASUS G51VX would be a much more attractive gaming machine.