That is, until a plot is hatched to take the production 'off the grid' and shoot it for real, away from the comfort and security of trailers and minders. But reality soon becomes too much for the actors as they have to fend off not only their own egos, but the guerillas whose territory has been invaded.

Filled with just the right balance of comedy, action and industry self-referencing and with some great comedic turns, especially from Robert Downey Jr. (who knew his comedic timing was so good?), Tropic Thunder is just the right antidote to a busy/stressful working week.

Of note is the version on offer here which is Ben Stiller's Directors cut, which is 14 minutes longer than the original theatrical cut.

Tropic Thunder is presented in the widescreen scope aspect ratio of 2.35:1, encoded in MPEG-4 AVC compression.

It's very heartening to see a continued high standard employed by Paramount and Dreamworks and this is no exception.

It's a spotless print, with very sharp detail and a pleasingly vibrant range of colour. The lush green of the jungle and the bright bold explosions make for some pleasing digital eye candy. I saw no examples of icky digital noise reduction or film to video artifacts. There is a little bit of grain, only really noticeable in dark sections, but nothing even remotely close to intrusive.

For all intents and purposes, a practically perfect encode. 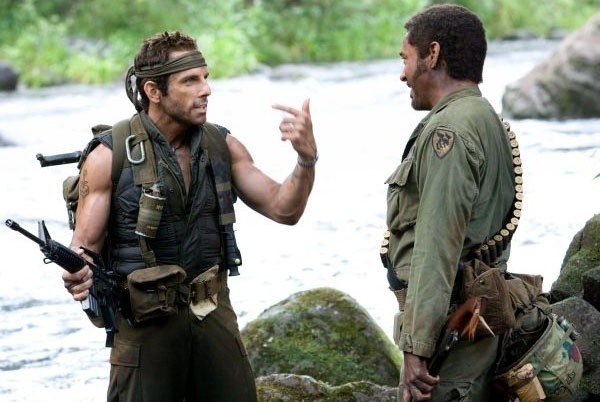 Make no mistake; whilst the film may be a comedy - the soundtrack on offer is every bit as aggressively mixed as the very films it lampoons. Importantly, dialogue is not overshadowed by the surround mix, nor by the very deep low frequency effects. Surrounds are constantly engaged to bring the environments to life.

Hats off again - reference quality all the way. 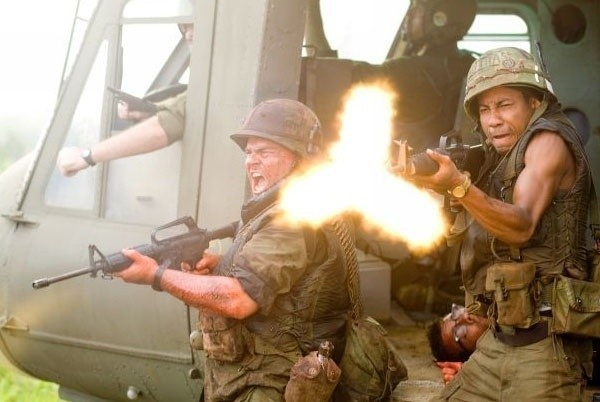 The first of the audio commentaries, is hosted by Ben Stiller and several members of the crew which serves as a drier, more clinical examination of the production - more enlightening than entertaining. The vast majority of the fun is saved for the second commentary, which brings the three main cast members - Stiller, Black and Downey Jr back together. It's pretty damn funny at times and it was fun to hear Downey Jr. make good of his promise from the film (listen after watching and it will be clear!)

Rain of Madness serves as somewhat of a making of documentary, with an obvious nod to the Apocalypse Now documentary Hearts of Darkness. Made as though the production is reality, as the film within the film falls apart, this proves what good sports the cast actually are.

The real making of the film can be found in the remaining featurettes, The Hot LZ ; a dissection of an action sequence,The Cast; short production vignettes broken down by actor (with the revelation from Robert Downey Jr. that Iron Man will be a trilogy!), Blowing Shit Up really needs no explanation, Designing the Thunder a look at the set-making and Tom Cruise make up test which is a rough cut of his hilarious dance moves from the end credits.

The next featurette, Full Mags is a split screen, uncut improve session between Ben Stiller and Robert Downey Jr. The latter actor's seriousness is both hilarious and just a little bit disconcerting.

The compilation of Deleted and extended scenes are some more off-cuts that weren't seen fit to be integrated into the longer directors cut, so these are the really extraneous bits. The Alternate Ending is a nice inclusion but definitely inferior to the version in the final cut.

Finally, the MTV Movie Awards promo sequence for the show, showing the making of a fake promo. Brain explosion. 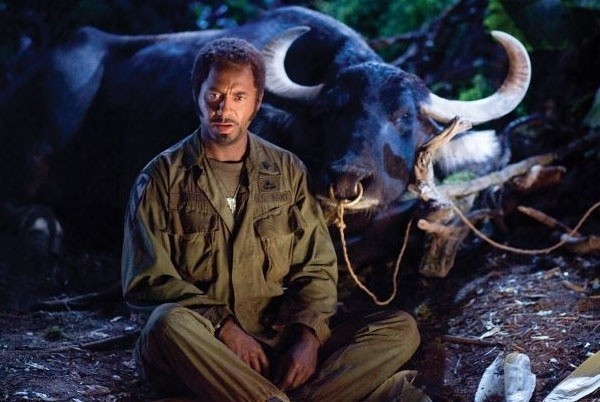 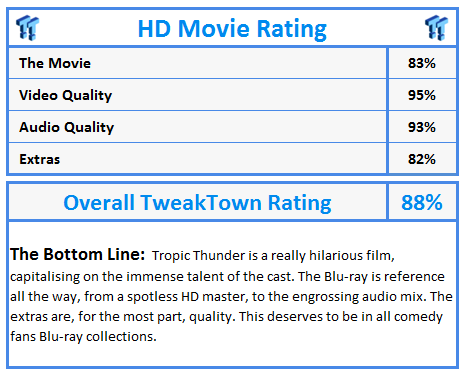