As far as wired keyboards go, the ROG Strix Flare II Animate is costly, but it's one of the most comfortable, responsive, and feature-packed options out there. From the dedicated media controls to the AniMe Matrix LED lighting, it's brilliant.

There are features for a wide range of products that don't have a lot to do with function or even form, stuff that might seem superfluous and not all that important to the bottom line - performance. RGB lighting is one, but these are the sorts of features that add personality and style, which is arguably important to create a sense of identity and genuine attachment.

This might be a strange way to begin a mechanical keyboard review, but take one look at the new ROG Strix Flare II Animate, and you begin to see just what ASUS is going for - style. Of course, that sits alongside delivering a mechanical keyboard that warrants both the ROG branding and the premium price point, but this is a keyboard that might just be one of the most visually impressive on the market today. 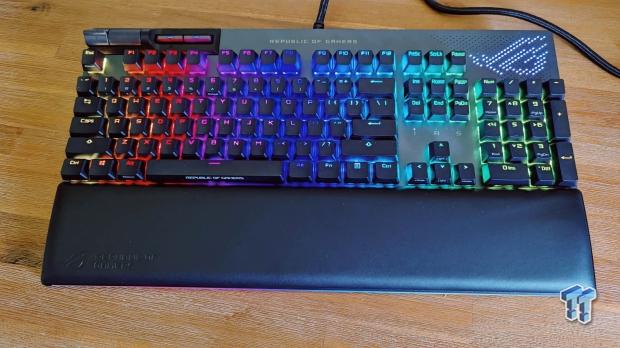 And sure, that's a subjective statement, and you could argue that the ASCII-inspired AniMe Matrix LED display found here on other ROG products is cool but not worth paying extra for. That said, the Animate portion of the new ROG Strix Flare II Animate Mechanical Keyboard was something I dug, but it's only a part of a bigger picture of the 'extras' that make up this keyboard.

The wrist rest is one of the best on the market, like jumping into a car and discovering some nice and comfortable leather seats. Luxurious and then some. The RGB action is on point and even extends to the bottom of the wrist rest, which is a nice little flourish.

Media controls are just another extra that makes the ROG Strix Flare II Animate Mechanical Keyboard feel like an all-in-one. And speaking of its main function, as alluded to above, it's across-the-board impressive to use. Let's dig in. 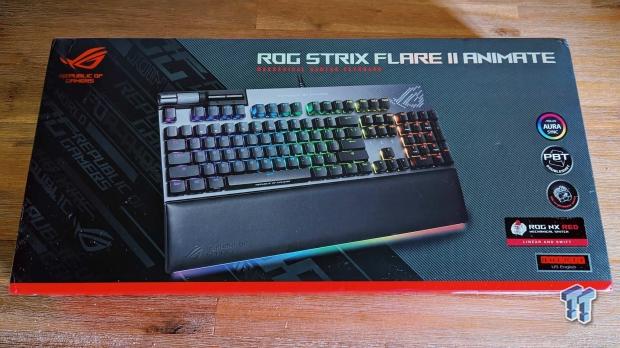 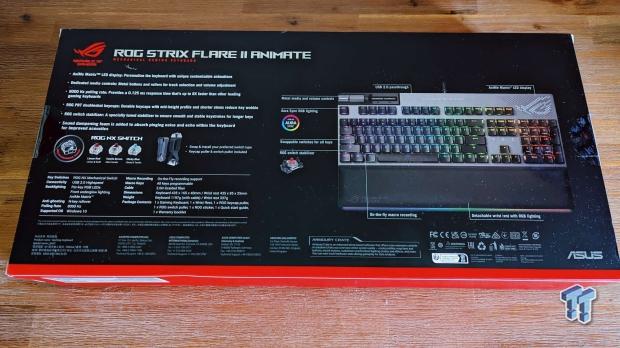 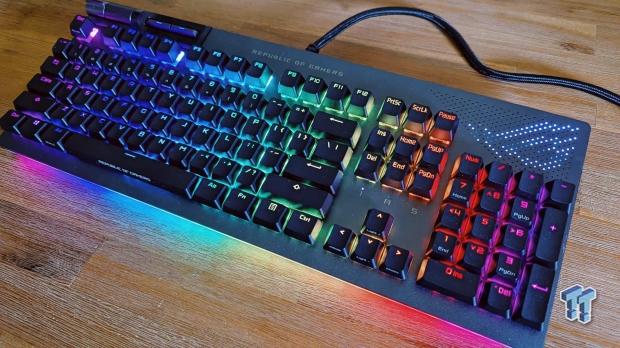 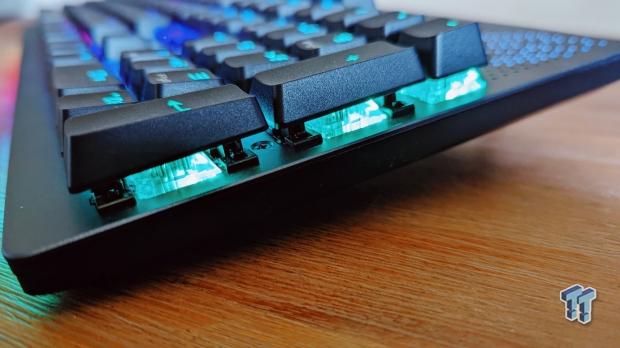 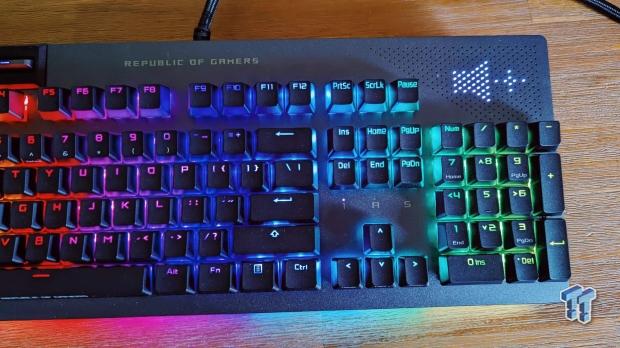 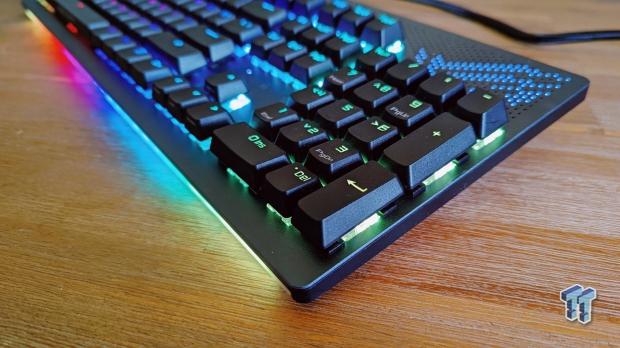 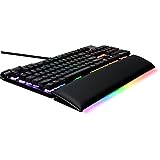 Adding to the style of the ROG Strix Flare II Animate Mechanical Keyboard is the slim build and floating key-cap design, which is minimal and in line with the look and feel of keyboards in 2022. For this review, we tested a model with ASUS's own ROG NX Red switches (Cherry MX versions are also available), and as per the coloring, it's a linear-style mechanical switch designed for speed and accuracy.

With an actuation point of 1.8mm, that being the travel distance before a keystroke is registered, and an actuation force of 45g, the result is a smooth and responsive feel perfect for fast-paced games and even productivity. Adding to the experience are sound dampeners as part of the underlying keyboard design, which makes the ROG Strix Flare II Animate one of the quietest linear mechanical keyboards we've tested to date - which you can see in our sound level chart further down.

The dampening is more aligned with the spacebar and the arrow keys, with the actual keys themselves having a more distinct sound. Very cool and when coupled with the luxurious wrist rest, the overall comfort is next-level. 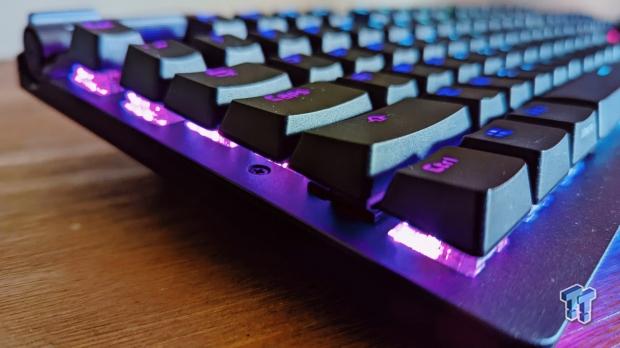 You've also got double-shot PBT keycaps for that tactile touch and peace of mind that they won't fade or degrade. And then there's the ability to change both the keycaps and the switches (ASUS packs in both a Keycap Puller and a Switch Puller), a level of physical customization and modification that's commendable.

Naturally, this extends to the lighting, with AURA Sync features if you're running multiple ASUS bits of gear and the Anime Matrix LED display. The latter can not only be set up to play cat animations (naturally( but also provides some great visual feedback for the dedicated media controls. And things like the lock button that disables Windows keys when gaming.

There is some function behind its inclusion, but it's still mostly a visual showpiece to justify the ROG Strix Flare II Animate's USD 220 and AUD 350 price tag. One area that might be a misstep is the inclusion of USB2 passthrough, a feature found on a lot of premium full-sized keyboards but not something you're likely to use on account of the lower speeds associated with USB2.

The downside is that ROG Strix Flare II Animate ends up taking two USB ports to accommodate the feature and the cable itself is non-detachable and chunky. It not only limits the portability of the keyboard, but it detracts from the otherwise supremely stylish design.

As with all ASUS hardware, from motherboards to graphics cards, software support and in-app customization is handled via Armoury Crate. A somewhat large program on account of it being compatible with all ASUS ROG gear, but also a powerful software suite.

For the ROG Strix Flare II Animate, you can change the function of every key, including the dedicated media controls, assign and create macros, and make adjustments to the lighting. 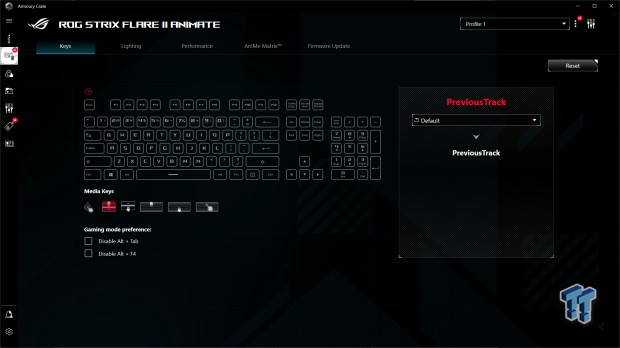 Macro creation is straightforward, laid out in a step-by-step fashion with the ability to tweak each step. With every feature of Armoury Crate, there are little tutorial introductions that give a quick overview of the functionality, which is a nice little touch - especially as it makes adjusting things like the Anime Matrix LED display simple. It was here that we learned that the functionality side of the little LED display can display the date and time and let you know when you've received mail.

There's also the ability to turn it into a visualizer for audio and music playback, which is very cool. I think it's a great counterpart to the excellent RGB lighting - and it's awesome that it's as programmable and versatile as ASCII art in a text file. 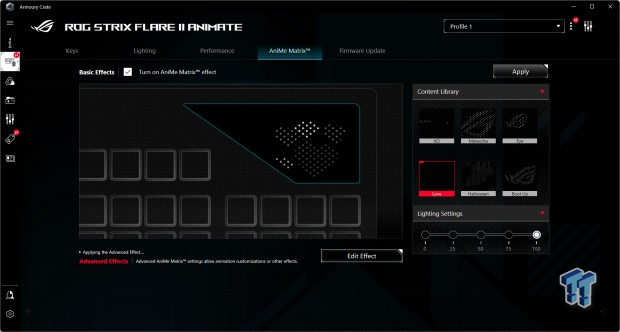 The final bit of customization found in Armoury Crate has to do with the overall performance in terms of latency, with the ability to crank the default 1000 Hz polling rate up to an impressive 8000 Hz. This reduces the latency from 1 millisecond down to 0.125 milliseconds. Doing so does put more pressure on the rest of your hardware, though with the testing rig we used for this review, it was almost impossible to tell the difference between the various polling rate options.

On account of 1ms itself is pretty much instantaneous. Though if you're going to play a competitive first-person shooter with the ROG Strix Flare II Animate, you might as well reduce the latency every chance you get.

With the overkill 8000 Hz polling rate and the quick and responsive linear ROG NX Red switches, the ROG Strix Flare II Animate is the sort of keyboard that excels when gaming. Testing with Call of Duty: Modern Warfare II, Apex Legends, NVIDIA's new Portal with RTX mod, and even some Warhammer 40K: Darktide, the experience was flawless.

What stood out the most, though, was the comfort that comes from a wrist rest that removes all wrist fatigue and the great feel of high-quality keycaps. Long gaming sessions with the ROG Strix Flare II Animate are awesome. With the ability to save multiple profiles, it's great to have the volume wheel and the forward/back wheel handle things like weapon selection in a shooter.

Being a full-sized keyboard, there's plenty of room to map additional functions to keys, and the easy-to-access lock button disables things like the Windows Start bar and even the ability to Alt-TAB - if you so choose. As PCs are not 100% reliable when it comes to playing games without encountering issues or crashes, especially when you're playing close to launch, this wasn't something I toggled.

Although Armoury Crate is great for customization and creating profiles for games and apps, it's a little clunky using the installed game interface for setting up preferences. A minor issue and certainly not something that detracts from the overall experience.

Fast and responsive linear switches might not be the ideal choice for those that mostly use their keyboard to write reports, answer emails, or, say, write a review for a mechanical keyboard. And on that note, ASUS offers various switch options for the ROG Strix Flare II Animate - with the ability to replace them sometime down the road. With that out of the way, the ROG Strix Flare II Animate is brilliant for productivity, the keycaps all have a wonderful feel, and the wrist rest removes wrist fatigue entirely.

The dedicated media controls are great, and, as mentioned above, if you're in work mode, you can set the AniMe Matrix LED to light up whenever you get an email. Which is justification enough for writing off the purchase of the ROG Strix Flare II Animate as a work expense. 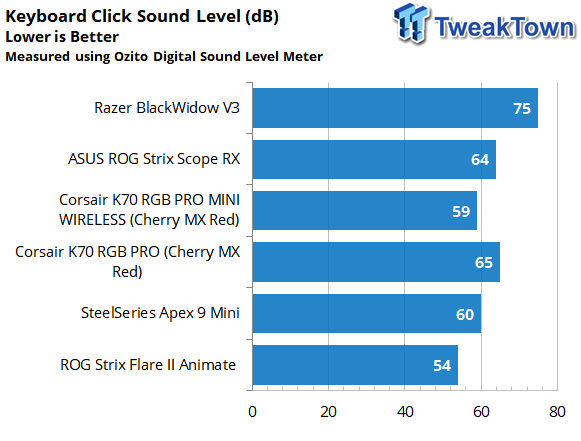 To test the overall sound level of a keyboard, we use the Ozito Digital Sound Level Meter capturing the sentence "the quick brown fox jumps over the lazy dog" multiple times and recording the maximum dB level. This is to indicate how "loud" the switches used are for everyday usage.

A premium wired keyboard but also a supremely stylish and feature-packed one to boot. The ROG Strix Flare II Animate from ASUS ticks just about every box you might have in terms of core features and extras, and I'd go so far as to say that the customizable AniMe Matrix LED is the sort of extra you'd want on a high-end keyboard.

Tested with ROG NX Red switches, the overall performance and feel are excellent, and if all you're worried about is the keyboard side of the equation, then the ROG Strix Flare II Animate delivers.

But, when it comes to full-sized keyboards, extra non-essential features are great to have. With the awesome wrist rest, dedicated media controls, quick lock functionality, and per-key RGB lighting that adds to the already stylish build and shape, the ROG Strix Flare II Animate is an impressive showing from ASUS.

A type to remember, and a keyboard that is easily one of the best currently available.

As far as wired keyboards go, the ROG Strix Flare II Animate is costly, but it's one of the most comfortable, responsive, and feature-packed options out there. From the dedicated media controls to the AniMe Matrix LED lighting, it's brilliant.