The Meshroom S from SSUPD is a great follow-up to the Meshilicous. The ability to house a full ATX motherboard and other full-size components puts the Meshroom S a step above. 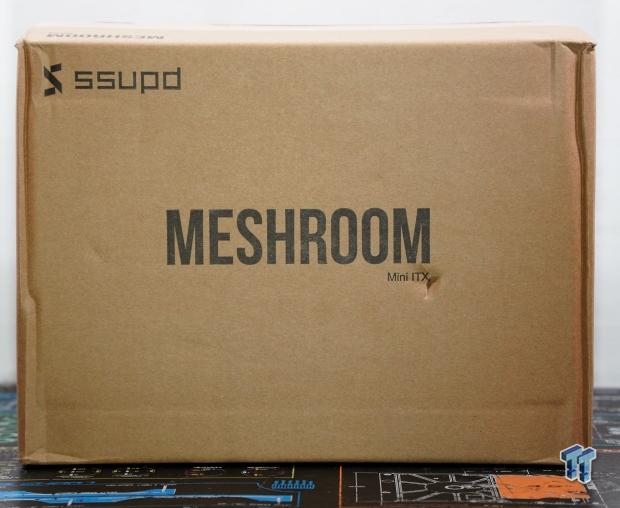 SSUPD is a sister company of Lian Li, so if this review feels like a review of a Lian Li case, that's why. SSUPD debuted with the awesome all-mesh case known as the Meshlicious. Boy, oh boy, did Meshlicious make a splash in the SFF community, coming in at a ridiculous size of 14.67 liters while supporting mITX and Mini DTX motherboards.

While the Meshlicious was great in all, the full ATX community gets the full treatment here with the Meshroom S. Touting the ability to handle a full-size ATX motherboard and a four-slot GPU in different configurations.

The model I have for review today is the fossil gray color, with other color options available. Pricing for the Meshroom S starts at $120 and $170 with a PCI-E 4.0 riser cable. 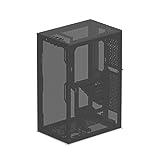 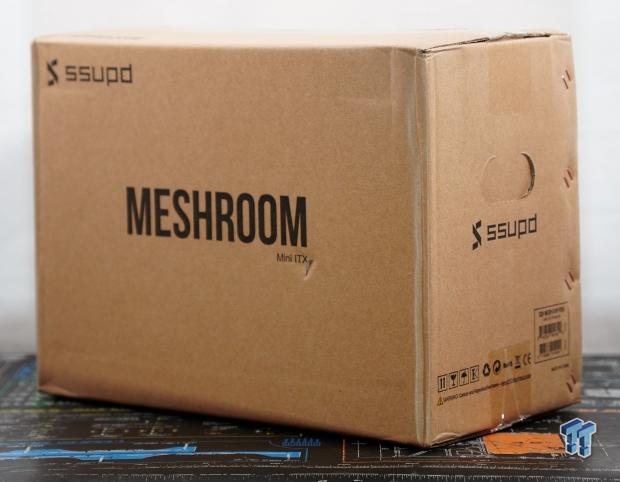 The Meshroom S arrived very protected and in good shape. Pretty minimal labeling on the outside of the box, so let's open it up and check it out. 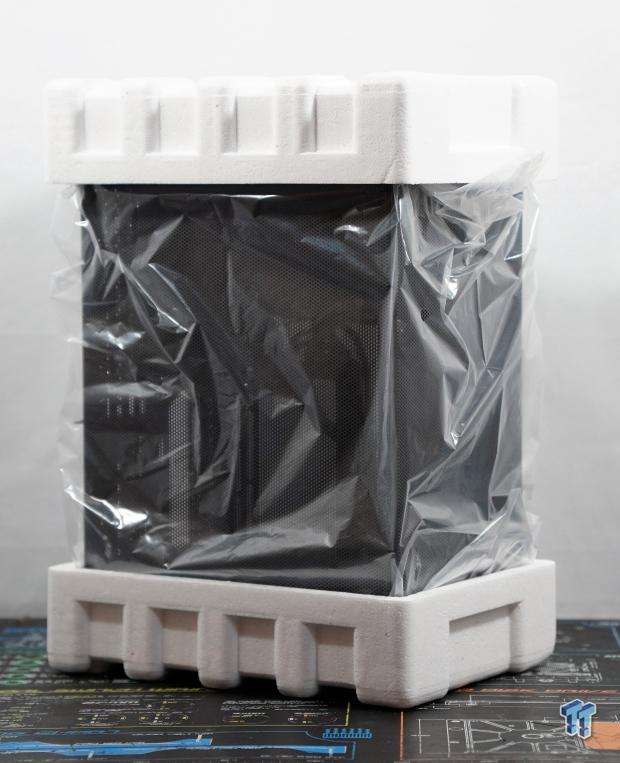 Pulling the Meshroom S out of its small cardboard box reveals a familiar sight, the two styrofoam end caps and a plastic bag for added protection.

Outside the SSUPD Meshroom S 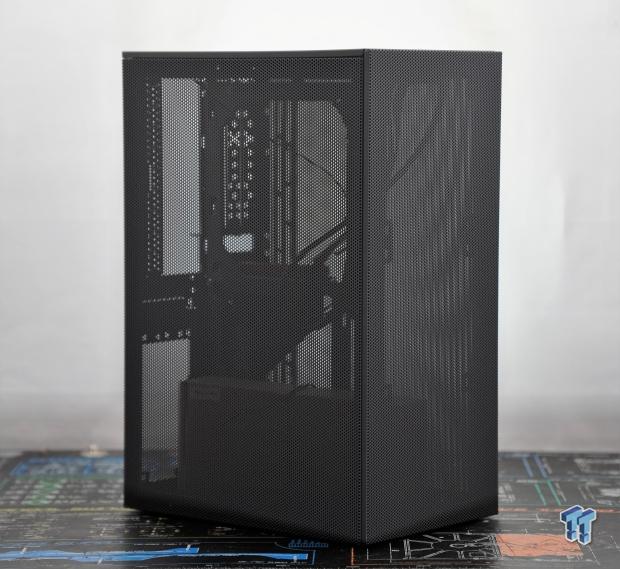 The exterior of the Meshroom S is well, all mesh. Except for the rear panel where the I/O is located, every panel has a fine mesh to allow maximum airflow. 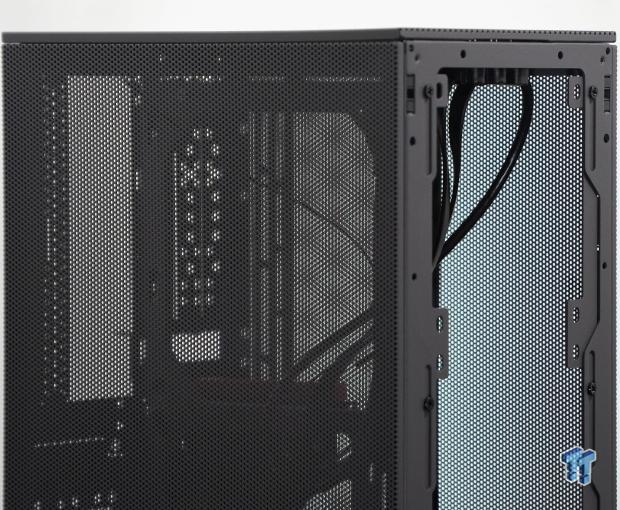 Pulling off the first of four sides, the top and front panels, reveals the locking system the Meshroom S uses to hold the mesh side panels on. 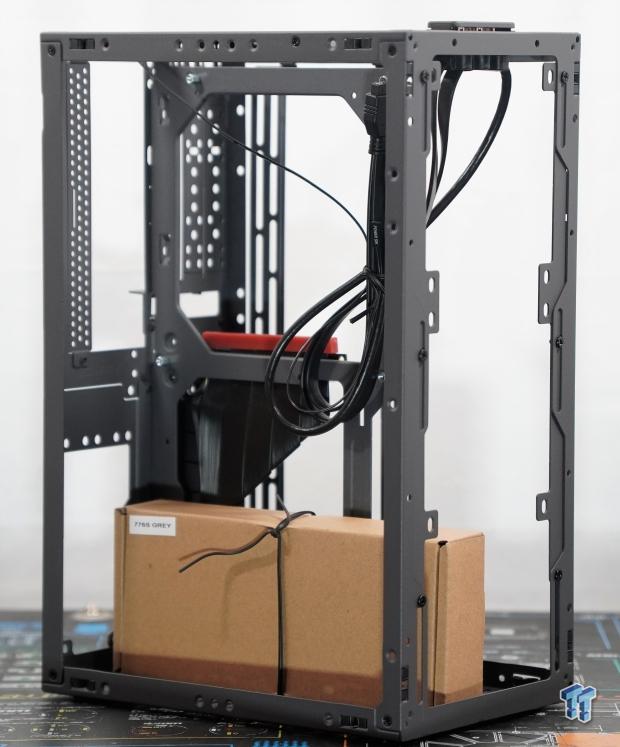 With all the side, top, and front panels off, the skeleton of the Meshroom S remains, which is made from powder-coated SGCC steel. Front fan support is limited to either two 120mm fans or two 140mm fans with respective radiators, provided the end-user installs an mITX motherboard. Also supported is a 360mm radiator from the 360 Extend Bracket accessory.

This view also gives you a look at the included PCI-E 4.0 riser cable that's included. Do note that this cable is only for mITX and DTX configurations. If a full ATX motherboard is used, a longer PCI-E riser cable must be used. 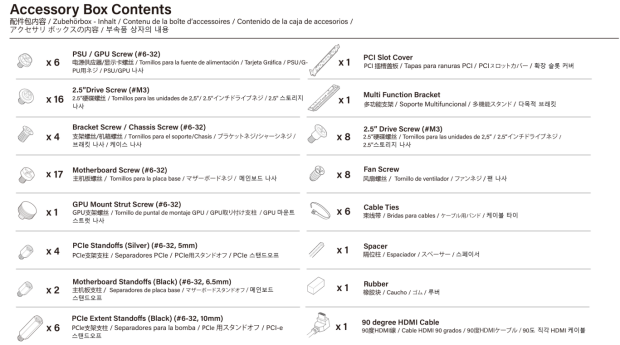 The brown accessory box here has a plethora of stuff inside it. There's a lot to list, so here is a picture of the content list. 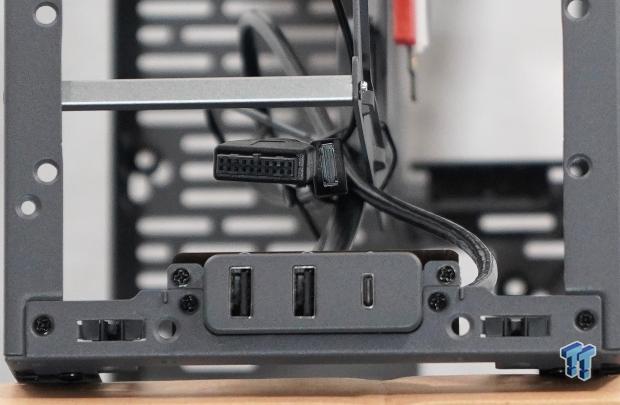 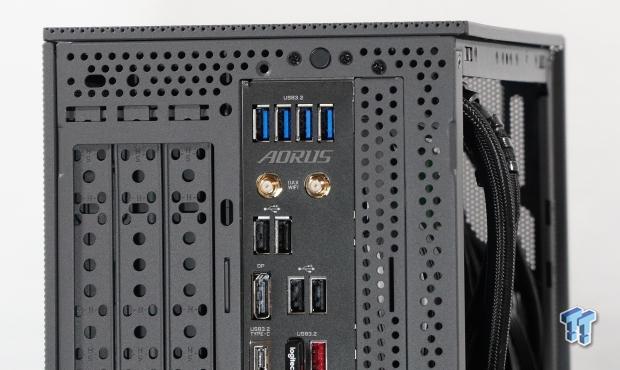 The power button has been relocated to the rear of the Meshroom S instead of being up front like in the Meshilicous.

Inside the SSUPD Meshroom S 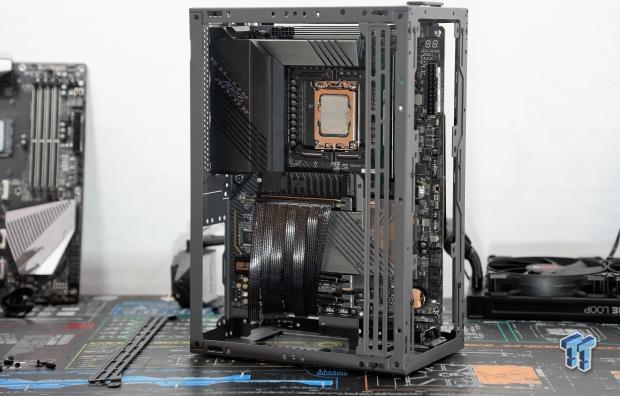 One of the big draws with the Meshroom S is the compatibility for larger motherboards like mATX or even a full ATX. You do, however, have to make some compromises, for example, giving up a full-sized ATX PSU for an SFX one and any front cooling options. 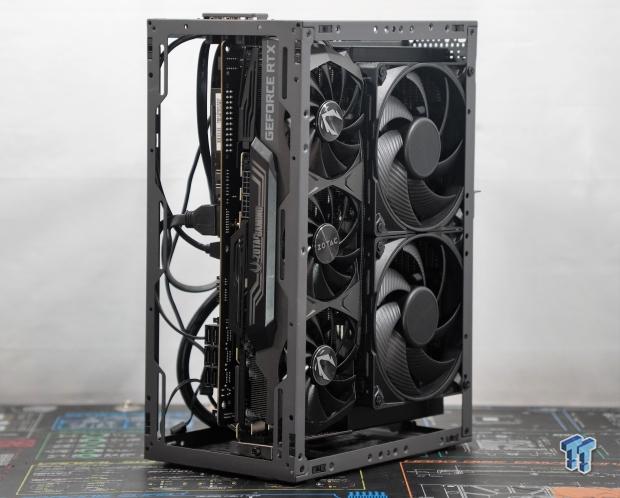 Another compromise is not being able to use any SATA ports with standard-sized ATX motherboards. The SATA ports butt right up against the front mesh panel. 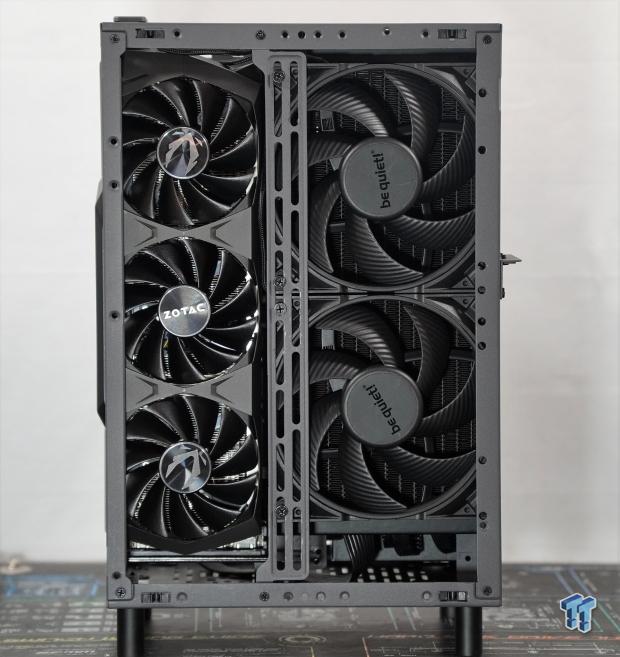 Installed here is a Zotac GeForce RTX 3090 Trinity and a be quiet! Pure Loop 280mm CPU cooler, which was a very tight fit. If it weren't for the removable sections of the Meshroom S, this combo would not have fit. 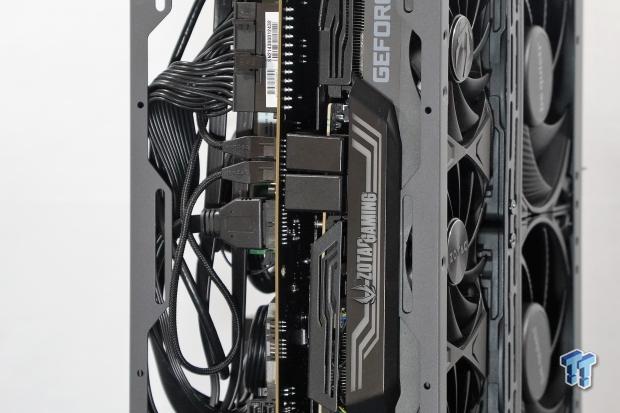 Speaking of a tight fit, the Zotac RTX 3090 Trinity has dual reverse eight-pin PCI-E plugs, so I had to source some reverse PCI-E adapters to make the tight turn to be able to fit between the back of the GPU and the motherboard tray. 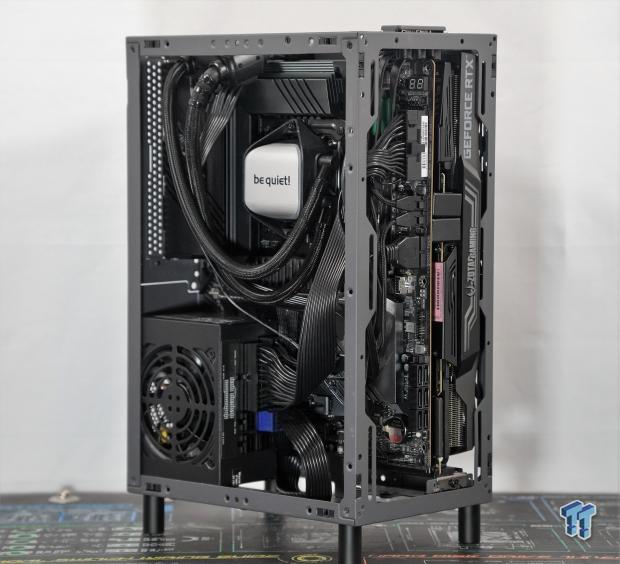 Installation of the test system was definitely a bit challenging for sure. However, I enjoy a challenge. I never thought a full ATX system could fit into this small footprint. Cable management in an SFF case is thrown right out the window, but I made a decent attempt. 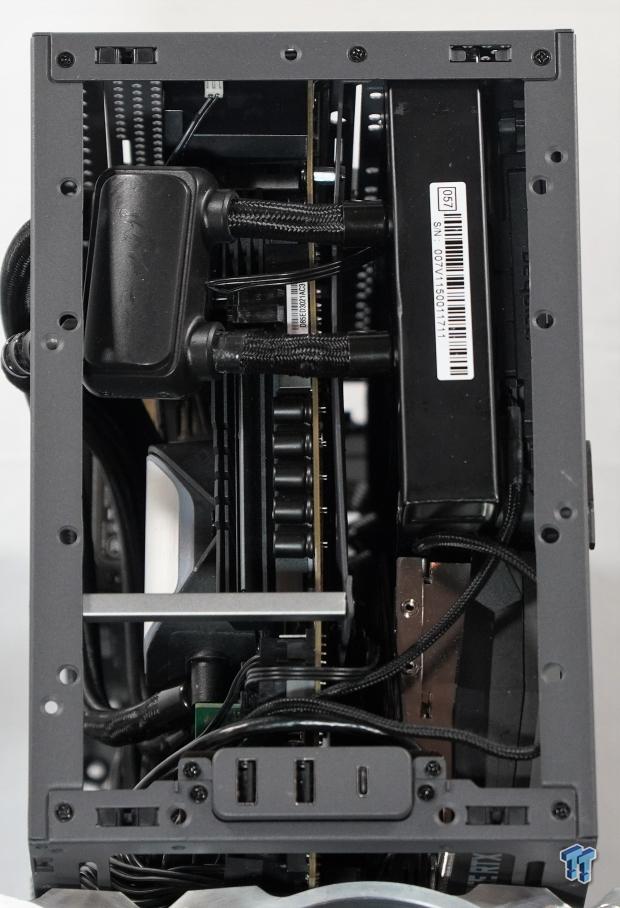 At first, I wanted to use a 280mm AIO, which turned out to fit, but it made me worry that fitting such a large radiator might not be possible with such a small form factor case.

The issue I kept running into was the pump on the be quiet! Pure Loop 280mm, which is inline on the tubing, instead of being an Asetek design and being on the top of the CPU waterblock, which would have made installation a bit easier. 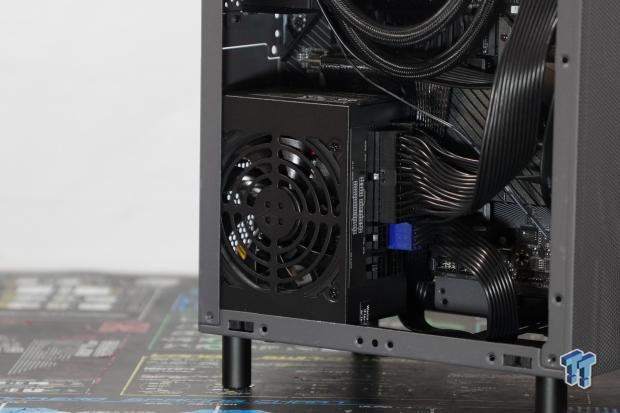 One drawback that made me think again was my choice of PSU. I must admit, I skimmed the user guide where it said it was recommended to use an SFX PSU if installing a full ATX motherboard, which makes sense when you think about it.

There is not enough physical width for a full ATX PSU to fit unless an mITX motherboard is installed. Thankfully I had a SilverStone SX700G on hand to use. 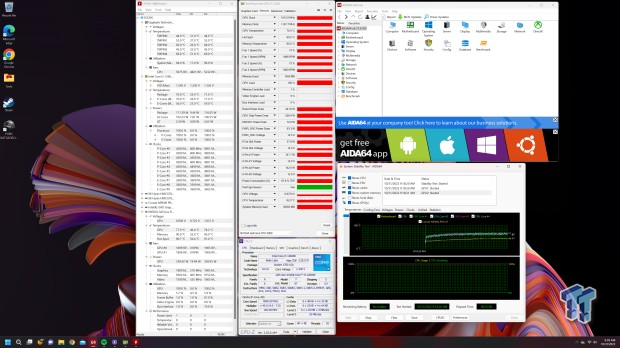 Running the test system full tilt, temps really were not an issue. The system was loaded up using Aida64 Extreme's System Stability test for 20 minutes with an ambient temp around 19C. 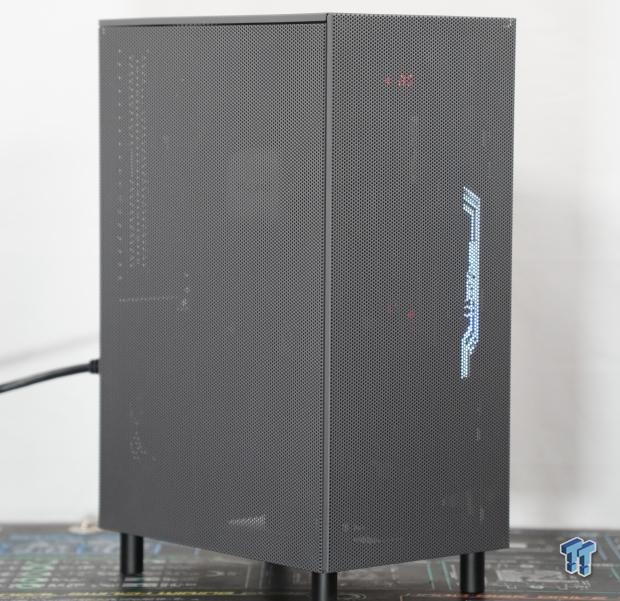 My final thoughts on the SSUPD Meshroom S are really good. I am thoroughly impressed with how much hardware one can fit into such a small form factor while still having great temps.

Much like any other small form factor build, the build process was slightly confusing but came together pretty well. The only takeaway is to have a longer power switch wire, as I had to run mine directly across the motherboard.

The Meshroom S has the ability to be as versatile as the builder wants it to be. If one wants to build an mITX system, it's fully ready for that. Micro-ATX, sure, just swap out the PSU for an SFX PSU. If ATX is more your fancy, the Meshroom S can accommodate that with the aforementioned SFX PSU swap, as well as getting a longer PCIe 4.0 riser cable to make the reach happen.

What's so interesting about the Meshroom S is its modularity and versatility. So often is the case where there is a single vision from the manufacturer, but in the SSUPD's case, several visions were achieved with the Meshroom S.

The Meshroom S from SSUPD is a great follow-up to the Meshilicous. The ability to house a full ATX motherboard and other full-size components puts the Meshroom S a step above.

Ryan joined TweakTown in 2022, but that doesn’t mean he hasn’t been around the block a time or two. He has always been a gamer through and through, and building PCs started when he took apart his family’s 486 DX2-based PC. He is into everything PC but enjoys building, gaming, and water cooling.