An off-the-shelf plug-and-play webcam from ASUS that supports 1080p 30fps video with a bright and soft focus, perfect for video conferencing apps like Zoom.

It's no secret that the rate of people working from home versus those that make their way into an office space every day has increased drastically in the past couple of years. Apps like Slack, Microsoft Teams, Zoom, and others have become day-to-day staples for so many, necessitating the need for audio-visual hardware to pair with a laptop or work-from-home desktop. From headsets to cameras to dedicated microphones, one of the most sought-after bits of hardware for the WFH crowd has been the off-the-shelf webcam. 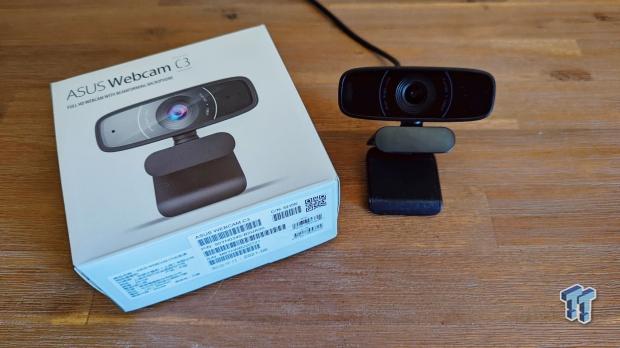 When it comes to in-built cameras found on pretty much any laptop, it's one area that has seemingly been left behind as new CPUs and GPUs bridge the gap between laptop and desktop power. Most in-built webcams on laptops are capped at 720p for video. And often feature poor calibration when it comes to how they deal with ambient lighting and noise. Throw in the rise in streaming and content creation for gamers involving video and audio, and the idea of a decent camera that can connect to a laptop or desktop is an enticing one. Even though 'webcam' can mean any number of things when it comes to function, form, and intention.

That said, the look, feel, and even the naming of the ASUS Webcam C3 paints a picture of what to expect. A small, off-the-shelf webcam designed to deliver quality 1080p 30 fps video across some of the most popular conferencing apps. And without any official software support from ASUS (which was a little surprising considering the brand) or in-depth tweaking available outside of swivel action, it's not something suitable for streaming or content creation. It might do in a pinch, but the overall microphone and video quality here don't hit the sort of level you'd want to use for video production. 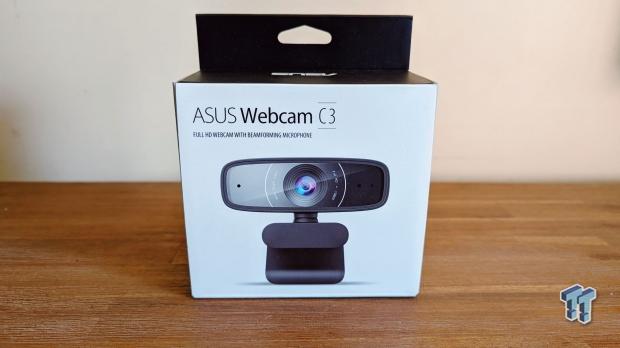 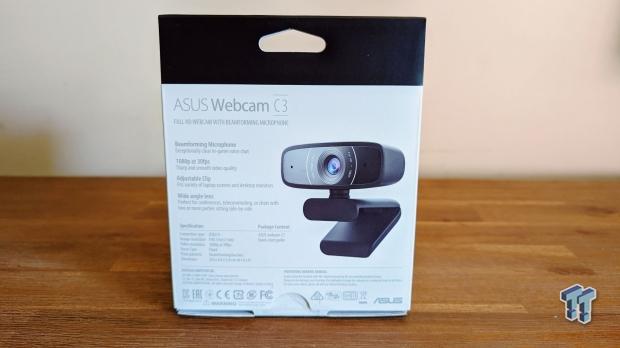 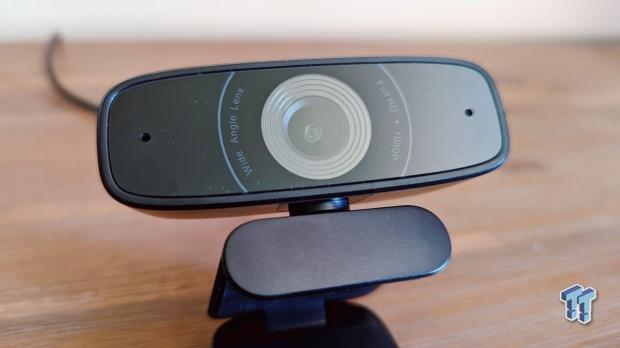 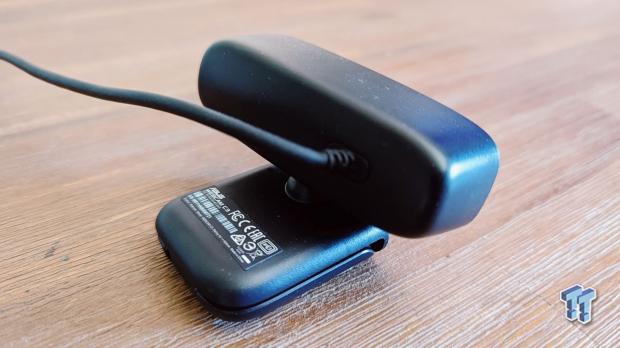 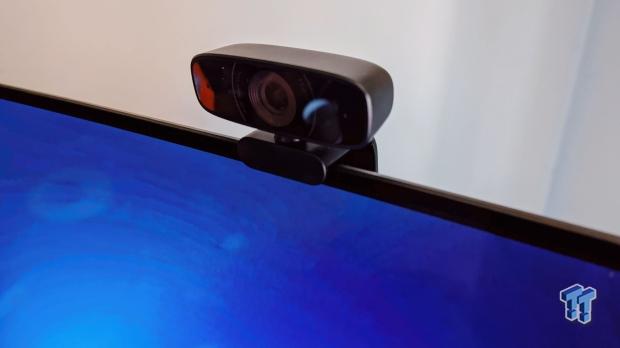 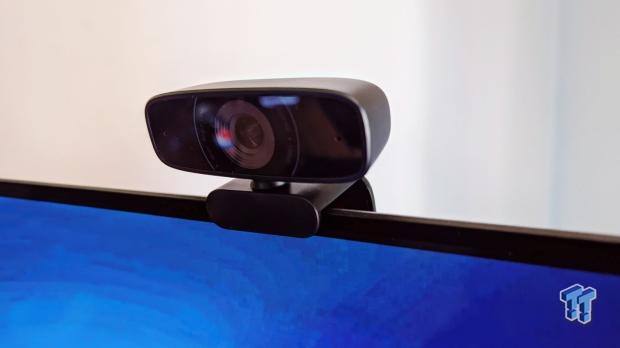 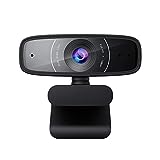 When it comes to a webcam, video specs are often the first thing you look for. Resolution, framerate, and anything else to do with digital video encoding and whatnot. Spec-wise, the ASUS Webcam C3 is modest (as is the price, USD 49.99 and AUD 149.00) with 1080p video and 30 fps being the target. 2 megapixels in camera terms, but with that, you've got a wide viewing angle of 78 degrees and the benefit of a plug-and-play approach to setup.

The adjustable clip makes sitting it on top of a dedicated display a breeze, with the camera itself able to rotate a full 360 degrees horizontally. Weirdly though, there's no vertical tilt outside of moving the clip/bracket. The clip also features a spot to connect directly to a tripod, which is a nice addition - though kind of standard with most budget-oriented off-the-shelf webcams.

Design-wise you've got a standard-looking webcam that can plug into a PC or laptop and then sit on top of a display. Even though the ASUS Webcam C3 comes from, you know, ASUS, there aren't any official drivers or even official software to customize the picture quality.

The plug-and-play nature works flawlessly, though (and installation was tested on both a desktop and laptop) with the Webcam C3 simply being recognized and set up as a generic 'USB Camera'. From there, it simply gets picked up by Windows and becomes usable across any number of apps - including the microphone.

One of the defining characteristics of the ASUS Webcam C3's video quality comes is its bright image, some saturation to the color, and an overall soft focus. The picture is what it is, an out-of-the-box calibration that you can't mess with outside of any tweaking done on top of the default video signal by third-party apps - so it might not be for some. If you have a very bright room, the image does begin to look overly washed out.

That said, the brightness and soft focus make it suitable for video conferencing and apps like Zoom - where, let's face it, a softer focus is preferred by most people. The image is noise-free for the most part, which is a definite plus.

In addition to this, the other part of the video equation comes with a wide viewing angle, 78 degrees, that equates to a cinematic 1.78 aspect ratio. This is wider than normal for a webcam and something of a plus as it allows for multiple speakers to be seen, even when placed close.

There aren't any official drivers or software support for the ASUS Webcam C3, but its plug-and-play nature makes setup a breeze as both the camera and microphone get picked up immediately in Windows. From there, it's simply a matter of firing up Zoom or Discord to enable it and apply any effects like custom backgrounds or background blurring. And with that setup across apps like these is immediate and easy. 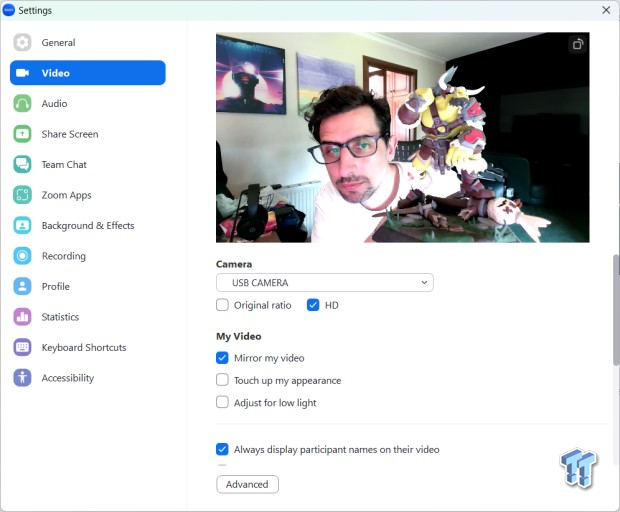 With the auto-focus and the bright calibration, it would have been nice to see some official calibration software from ASUS, as adjusting these sorts of settings can improve overall picture quality. In that sense, the default calibration here seems to be for artificially lit rooms with medium lighting.

Testing the ASUS Webcam C3 in a brightly sunlit room and we saw lighter colors and white objects become washed out to the point of glowing. It's worth noting because comparable products from companies like Logitech (which is one of the bigger players in the webcam space) do offer detailed camera customization via software.

As a 1080p 30fps camera, we confirmed both the resolution and frame rate when firing up Filmora to capture some footage. Strangely, when using the standard Windows 10/11 Camera app, recordings were limited to 20fps - across multiple PC configurations. We're unsure why. For front-facing video conferencing in Zoom or Discord, it's hard to say what mode is being utilized, but it wasn't noticeable.

For actual capture or pairing with content creation tools, there could be compatibility issues that arise - so be aware. As mentioned earlier, the ASUS Webcam C3 features a fixed focus lens, a wide viewing angle, and a bright default image that is soft but still clear. It's a webcam that takes advantage of its 1080p resolution to present video without unwanted noise or digital artifacts.

On that note, after testing for several minutes, there also weren't any noticeable artifacts or USB streaming issues; the ASUS Webcam C3 presented stable and clear video. Without official software and being calibrated for standard ambient lighting in an office or room, there's a lot to like about its plug-and-play nature. And getting decent quality video without any effort for Zoom and Discord.

The ASUS Webcam C3 features two built-in microphones with beamforming technology, which allows for some in-built noise cancellation and the ability to capture multiple speakers - something that pairs nicely with the wide viewing angle.

In terms of microphone quality, it's more passable than anything outstanding, with the results lacking in the low-end frequency department and sounding a little tinny overall. There's also a tendency to pick up background noise, which can be mitigated with third-party applications like NVIDIA's RTX Broadcast tools.

Taking the price point and small portable form factor of the ASUS Webcam C3 into account, there was no expectation that the microphone would perform as well as a dedicated microphone, but again, this is an area where official software could have stepped in to allow for some tweaking and artificial manipulation of the sound quality.

The ASUS Webcam C3 is an off-the-shelf webcam that has the look and feel of a webcam, and it comes with all the plug-and-play ease of use this style of camera brings. Although it supports 1080p 30fps video, the calibration, fixed focus, and wide-angle make it better suited to conferencing apps like Zoom and chat platforms like Discord.

As opposed to being a camera that could serve as entry-level content creation or streaming tool for those looking to dabble in the creative side of video production. This is reflected in the microphone quality, which is good enough for Zoom but lacking in finer low-end frequency detail.

All of this is reflected in the price, though, and the ASUS Webcam C3 hits an affordable sweet spot for those looking to upgrade their laptop camera or pick up a decent webcam for video chat and Zoom calls. The default focus and image quality might suffer in really bright rooms, but the soft focus and saturation do make for a good webcam experience.

It's a shame that it doesn't ship with official customization tools, but it nails the plug-and-play nature of the webcam, going so far as to provide full 360-degree horizontal rotation when needed.

An off-the-shelf plug-and-play webcam from ASUS that supports 1080p 30fps video with a bright and soft focus, perfect for video conferencing apps like Zoom.