Men in Black was a pop culture breakout hit in 1997, and remains a fun and enjoyable ride today in 4K.

Riding high on the resurgence of science fiction with Independence Day the year prior and the smash hit success of the rejuvenated Star Wars Trilogy: Special Edition a few months prior, audiences were primed and ready to make Men in Black the biggest box office success of 1997.

Ably assisted by the catchy tie-in song performed by star Will Smith, which ensured its breakthrough into popular culture, the series went on to spawn a lucrative market of merchandise, including action figures, games, collector cards, an animated TV series, two direct sequels, and the 2019 spin-off MIB International. 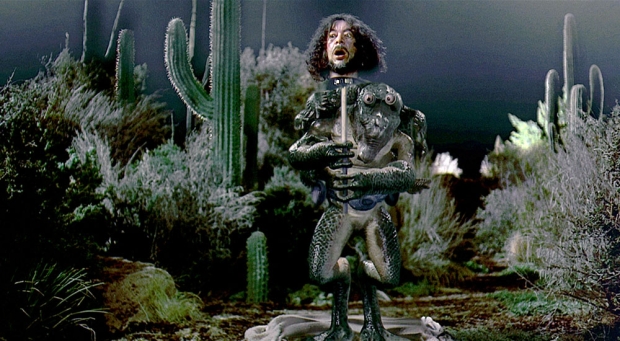 Based on the little-known comic book created by Lowell Cunningham, the Men in Black is a secret Government organization tasked with concealing the existence of extra-terrestrial life on Earth and the inevitable political conflict that goes along with it.

After the retirement of his long-time partner, Agent Kay (Tommy Lee Jones) is on the lookout for a replacement when streetwise cop James Edwards (Will Smith) comes into view and is quickly recruited. And it's not a moment too soon either, as the malevolent species 'the Bug' (Vincent Donofrio), an oversized cockroach-like species, has arrived on Earth and threatens its existence if it cannot find 'the Galaxy,' a device of infinite power which holds the key to winning a devastating, long-running inter-galactic war, and which will make Earth collateral damage.

Men in Black is presented in its original aspect ratio of 1.85:1, encoded with H.265 compression, and finished with an HDR-10 pass.

Originally shot on 35mm film with digital sequences printed into the master and edited and finished to 35mm negative, Men in Black scrubs up pretty well in 4K in this recently assembled scan. The transfer offers clarity that wavers between 'stunning' and 'very good' but remains consistently excellent.

Scenes with digital augmentation do suffer a noticeable softness (ILM were exporting at resolutions between 720p and 1080p at the time), and the low poly CG assets often call attention to themselves, most noticeably during the climactic bug fight. However, fine detail in regular cinematography is spectacular, with crisp and clean textures that jump off the screen, assisted by the wider color gamut and HDR pass that the 4K format offers.

By any measure, this is a superb presentation that will please many and likely preserves and presents the classic film in the best manner possible in a home environment. 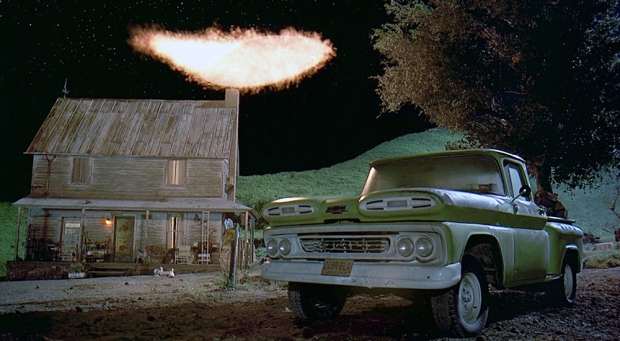 The film has always enjoyed a big, loud, and technically proficient sound mix in the 5.1 surround era, and now Sony has upped the ante by remixing the elements to take advantage of height surround mixing. Suffice it to say, this is big and bombastic, which constantly (and I mean constantly) keeps every channel pumping with auditory feedback, which is evident from the opening credit sequence.

But it's not always hitting you over the head - there's some really nice subtle ambiance during the quieter sequences that effectively wraps the viewer into the proceedings. Subwoofer usage is never left wanting and supports the more dramatic sequence with suitable aplomb. 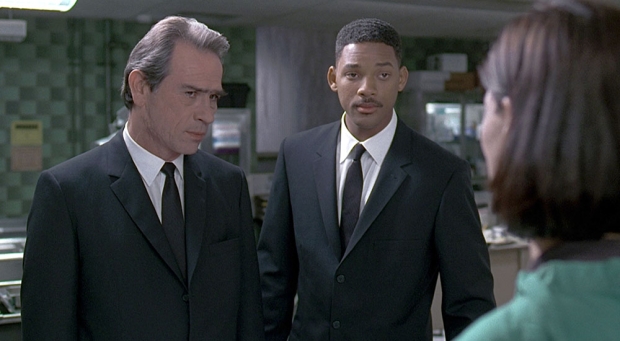 While Sony Pictures haven't produced any new extra features for this 4K edition, they have ported over all of the original DVD features on the included Blu-ray disc. Let's jump in.

First are two audio commentaries; the first with Director Barry Sonnenfeld and the star Tommy Lee Jones. Tommy Lee Jones seems to be a bit overwhelmed by the audio commentary game, but Barry Sonnenfeld guides him through and supplies some background information on the production. The audio is supplemented by a feature that allows the speaker to 'draw' on-screen and highlight certain objects. This was quite a revolution back in the DVD days, but now more of a novelty.

The second track is a bit heavier with production trivia provided by Director Barry Sonnenfeld, alongside various staff from the technical perspective, including make-up and visual effects. A drier but perhaps more interesting affair. 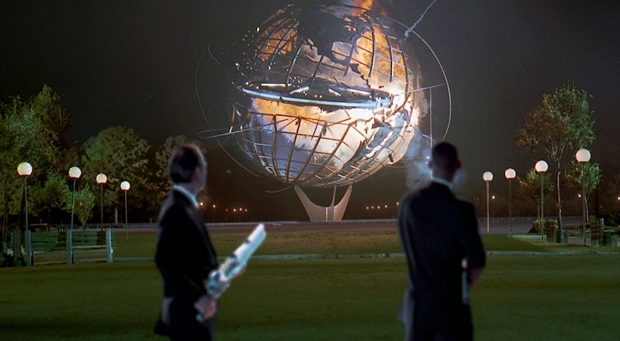 Next up are a bunch of video-based supplements, headlined by the 23-minute Metamorphosis of the Men in Black documentary, which serves as the best look at the film's production, cataloging it from the original comic book origins to the film's production and release. The Original Featurette is little more than a made-for-TV special with brief sound bites.

The Visual Effects Deconstructions and Storyboard Comparisons are fairly static presentations of some mildly interesting comparisons between the original blue screen stage work and the original storyboards.

The Scene Editing Workshop was quite the revolution on the original DVD, but its use here is reasonably outdated. Ironically, a film that was improved considerably during the difficult post-production period provides viewers the chance to do the same.

Finally, we have the films Music Video by Will Smith and the original Theatrical Trailer, all in standard definition.

Men in Black was a pop culture breakout hit in 1997, and remains a fun and enjoyable ride today in 4K.