The AS5202T is hard to beat in the two-bay NAS consumer market. It may be the only two-bay device to include 2.5GBe, a must for a modern NAS platform.
Buy at Amazon

Nimbustor has been around for several years, serving as the Home to Pro user flagship NAS in the ASUSTOR lineup. The latest two-bay platform, AS5202T, continues this by offering class-leading hardware and ASUSTOR ADM NAS firmware that offers all the high-end features consumers want from a DIY platform.

With this new platform, ASUSTOR packs in a dual-core Intel Celeron SoC paired with 2GB of DDR4, and it is upgradable with two SO-DIMM slots available. Continuing the design, the Nimbustor shares much of its aesthetic with past appliances from the same family; this being a two-bay unit, we have two included toolless trays while the rear I/O remains stacked with USB 3.2 and 2.5Gbe. 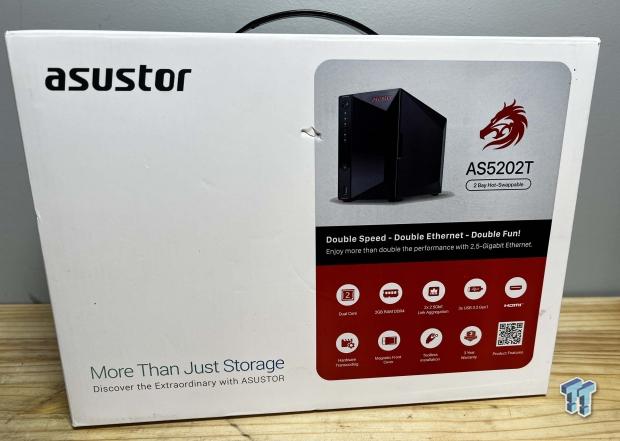 Packaging includes features and an image of the NAS on the front. 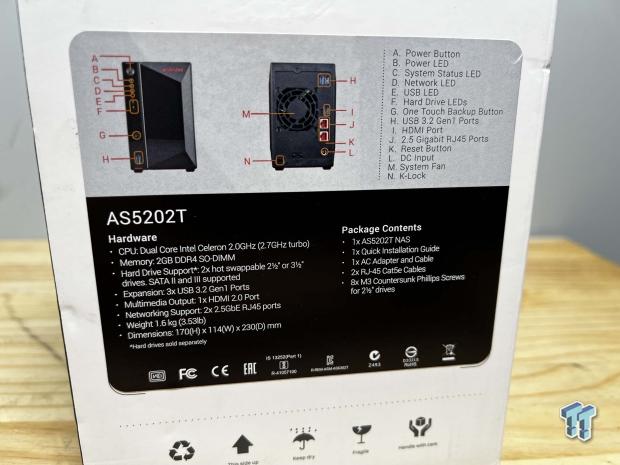 The back panel includes a full specification for the NAS. 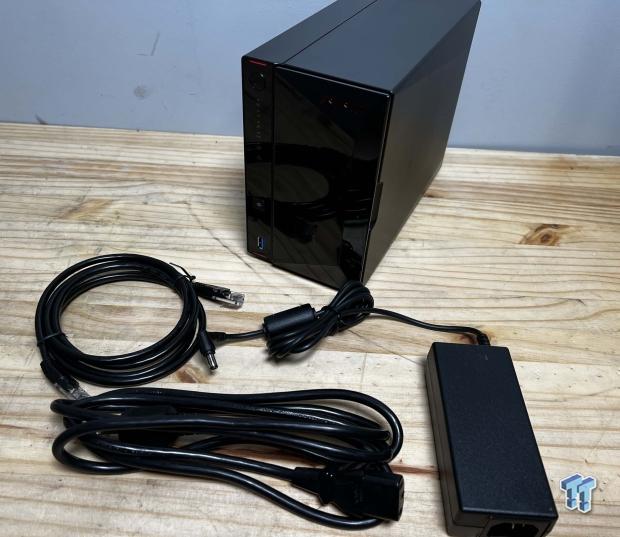 Included in the box, we have an ethernet cable and power adapter alongside the NAS itself. 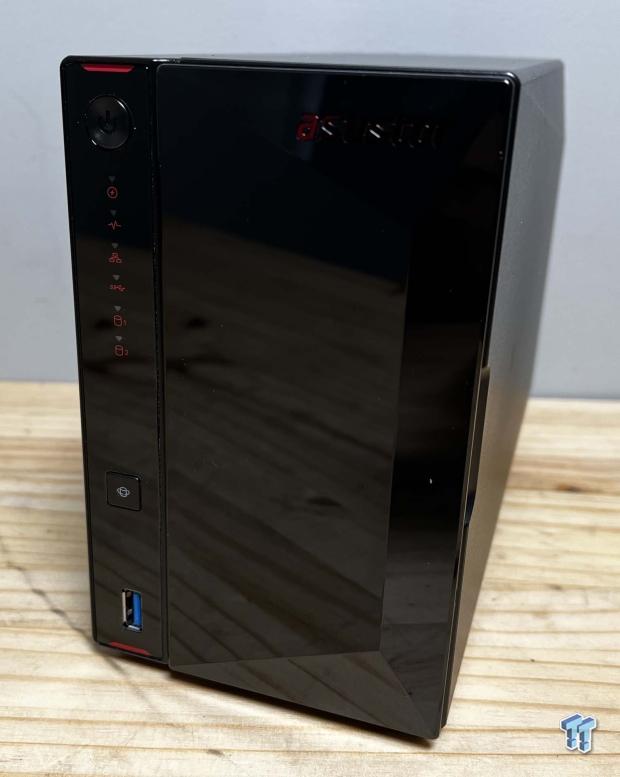 Up close, the AS5202T offers LEDs on the left panel for power, activity, and ethernet connectivity. We also have indicators for drive activity and USB. 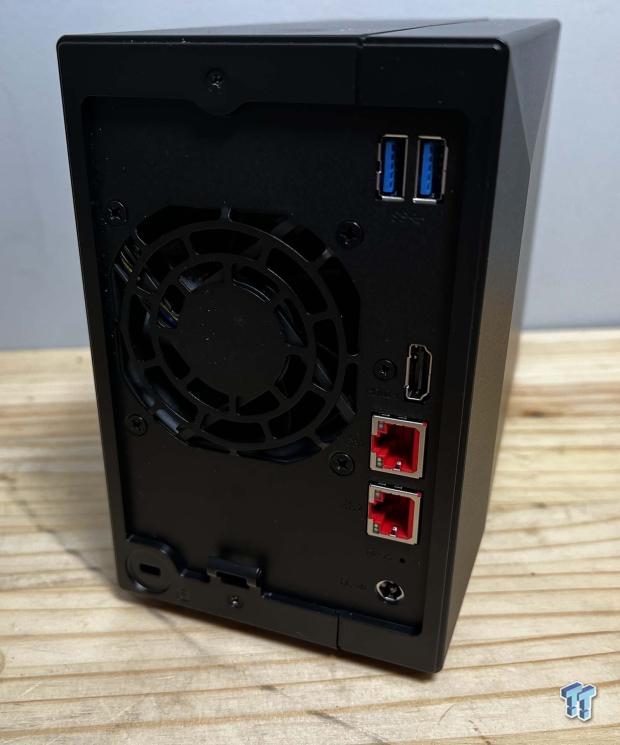 The backside of the NAS includes a cooling fan at the center and a lock slot below. To the right, we have the I/O that includes two USB 3.2, HDMI, and two 2.5GBe ports. 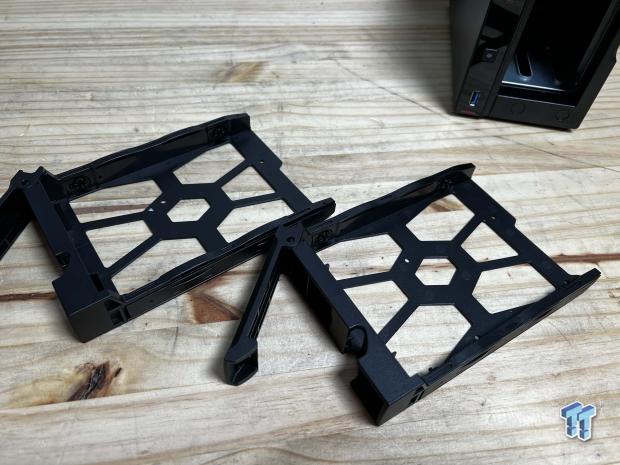 Drive trays for the Nimbustor are toolless for 3.5" drives, but 2.5" HDD and SSD must use screws. 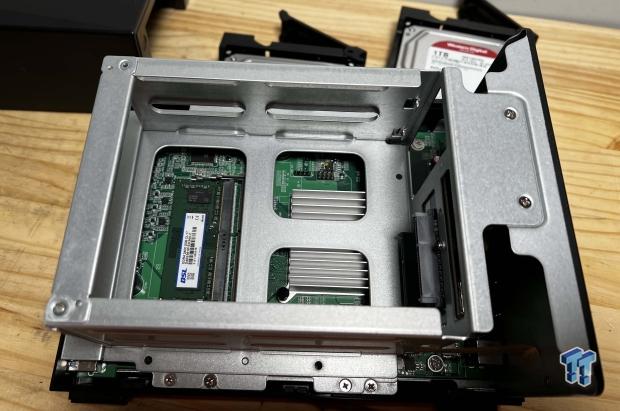 Internally, the Nimbustor does offer access to the memory slots for an upgrade. 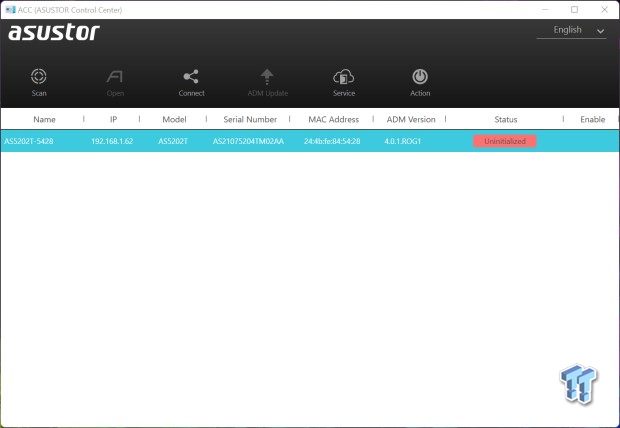 Setting up the AS5202T was simple with the help of the Control Center app from ASUSTOR. From here, we search the NAS on the network after powering it up and then trigger setup by clicking on the NAS to open the WebGUI.

After the initial steps, ADM will contact the server to ensure the system is up to date.

You can choose a light or dark theme and one-click setup or manual.

One-click setup asks for a few more details, including user and password and the scenario you want to work with, maximum capacity, or data security.

Once complete, you will land at the dashboard seen above. Quite familiar for anyone that has used a DIY NAS platform in the past. All the icons are self-explanatory, including App Central, Activity Monitor, and Storage Manager. 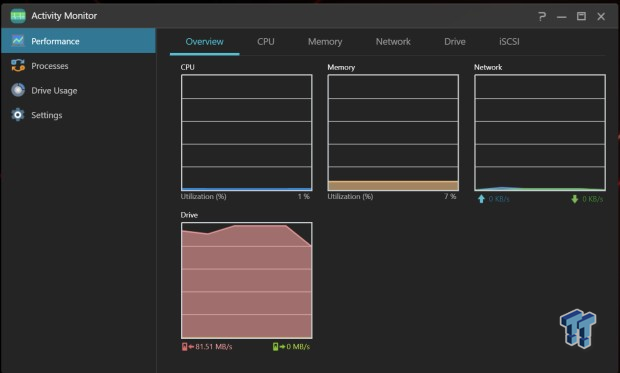 Running through some of these items, the Activity Monitor offers insight into the CPU, Memory, and Network use of the appliance.

App Central allows the management of a huge library of applications to further enhance the capabilities of the AS5202T. Some of the more popular apps can be seen above. 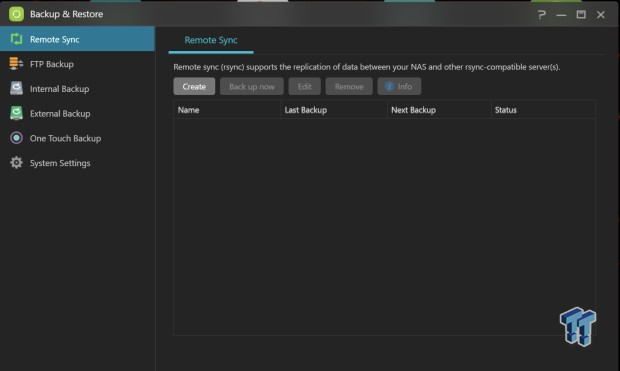 Backup and restore offers options for managing your data, including Rsync to a second NAS platform, FTP backup, and external drive options. 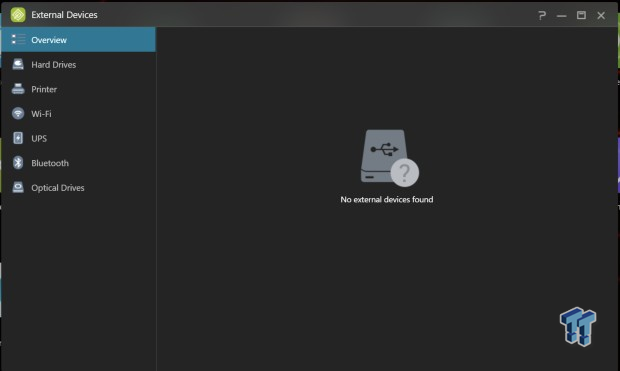 External devices allow you to manage and connect things like printers, Wi-Fi dongles, and Optical Drives. 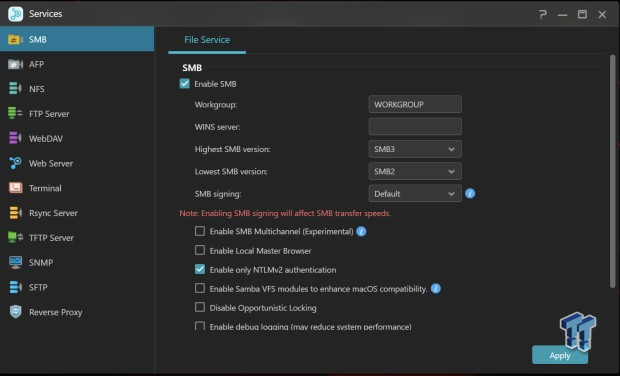 Services available to the AS5202T include the list seen above. The most used are SMB and AFP. We also have FTP support and WebDAV, Terminal, and Rsync. 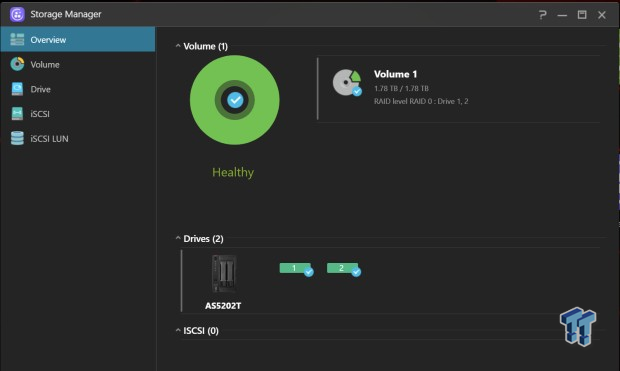 Storage Manager allows configuration of your drives after initial setup. From here, you can also configure SSD Cache and iSCSI connections.

I tested the AS5202T in SMB, mapped drive mode, and iSCSI with a mapped LUN. All testing was done with a 2.5GBE connection. 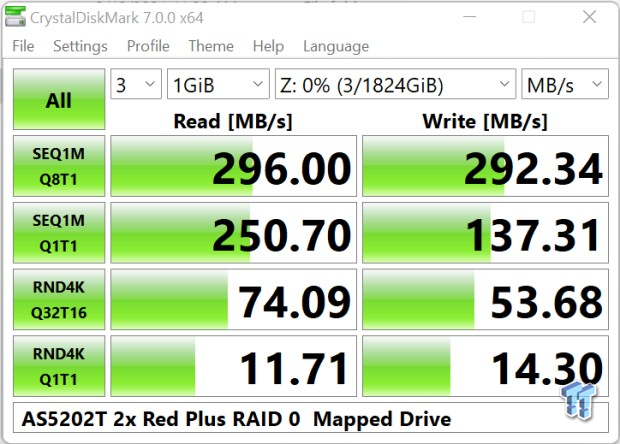 I initialized testing by setting up a RAID 0 array on our WD Red drives. Mapping the drive to our system gave us 296 MB/s read, and 292 MB/s write in sequential tasks. 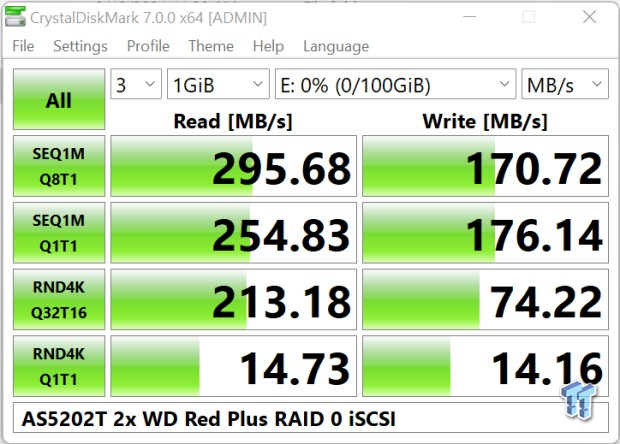 We also experimented slightly with Sabrent SO-DIMM, installing 32GB of DDR4 in the AS5202T. Performance was nearly the same in our tasks above, though it did help tremendously with vmbox instances on the NAS. 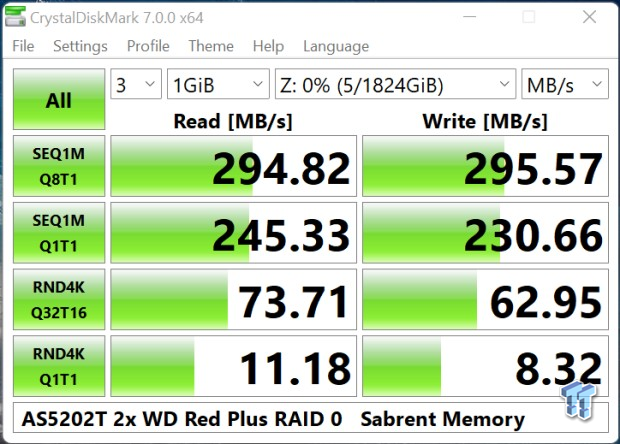 We swapped some drives, running a single WD Red alongside a 2.5" SSD to test caching. Random performance was up the most from the addition of the SSD cache. Sequential performance was on par with expectations. 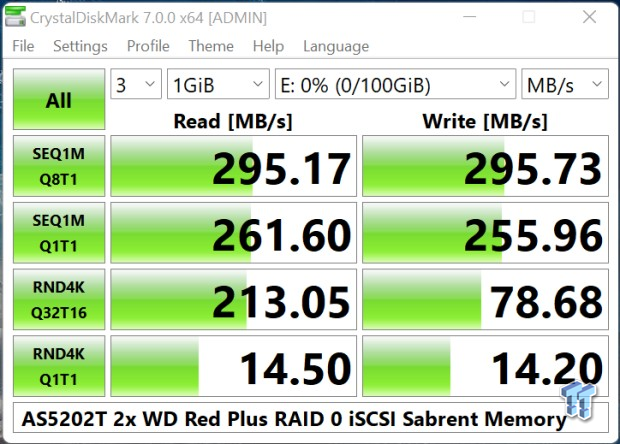 The AS5202T will be where most consumers want to enter the DIY NAS market, and ASUSTOR has opened this market up by offering one of the best platforms possible at this price point.

To that point, ASUSTOR continues its use of Intel hardware, and this offers Quick Sync transcoding, a huge feature for Plex users. Additionally, the app library continues to grow, allowing consumers to customize their NAS. Back again to hardware, the ability for consumers to expand the NAS to fit their needs is similarly huge, and ASUSTOR allows 64GB of RAM to be installed via the two DDR4 SO-DIMM slots.

In testing with our Sabrent RAM sticks, this didn't lend much performance to the sequential numbers we saw in CDM but made the system way more responsive when running multiple tasks simultaneously and when getting into VMs.

With the MSRP coming in at $299, I would hazard to say there isn't a better NAS at this price point, especially a platform that includes dual 2.5Gbe alongside USB 3.2 expansion. 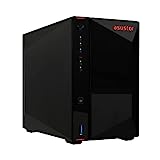 The AS5202T is hard to beat in the two-bay NAS consumer market. It may be the only two-bay device to include 2.5GBe, a must for a modern NAS platform.