After having reviewed Kingston's XS2000 with it being the first really high-speed native USB drive we'd ever seen, we came to an understanding that native USB can be superior to portable SSDs with a bridge chip. The main reason is compatibility. Compatibility is supremely important when it comes to fast portable storage. The XS2000 was, at that time, the only portable we'd ever tested that just worked and worked properly on any platform we tried. This is the beauty of native USB.

Traditionally, portable SSDs have relied upon bridge chips to interface with USB ports. Bridge chips are fine IF you have a motherboard that is compatible with said bridge chip. The problem is, there are a TON of compatibility issues across platforms and bridge chips. Often we have to swap around between USB cords, Type-A and Type-C, to get a portable SSD even to be recognized by the host system. And then, even if it is recognized, will it run at its rated speed? Often the answer is no. The frustration caused by bridge chip compatibility is real and can be extremely frustrating.

Now the problem with native USB until just recently has been performance. I mean, take a traditional USB thumb drive and try and copy large files onto it, try and run a game off one, yeah right. It's an exercise in patience, to say the least. Compare that with a portable SSD that is compatible with the host system. It's like comparing a mechanical HDD to a Gen4 NVMe SSD in terms of user experience. So, until recently, if you wanted to have fast portable storage, you had to take your chances regarding compatibility.

Maybe you had to update firmware on either the device or motherboard to get it to run right, maybe you got lucky, and it worked as expected. Maybe it only worked at reduced speeds over USB Type-A, maybe you couldn't even use it, or maybe it died quickly. Anyway, the point is fast portable storage that relies on a bridge chip to interface with the host can be kind of a crap shoot and a huge point of frustration for many.

Enter the native USB SSD controller. So far, we've only seen two of them. The first one worth anything came from Silicon Motion and debuted on the aforementioned XS2000. Supremely compatible and every bit as fast as any properly functioning USB-bridged SSD. The other native USB SSD controller we've come across is the one that adorns the portable device we have on the bench today. Unsurprisingly, this one is by Phison Electronics, who have their tentacles into every imaginable type of solid state storage device on the planet.

Compatibility is, as we see it, the most important factor for fast portable USB storage, next of course, is performance. So, let's see what the Phison-powered native USB SSD by inland can do for you by the numbers. 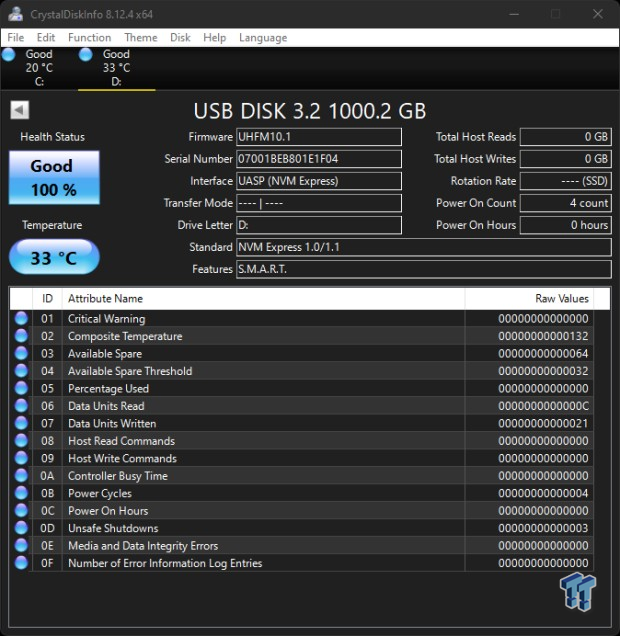 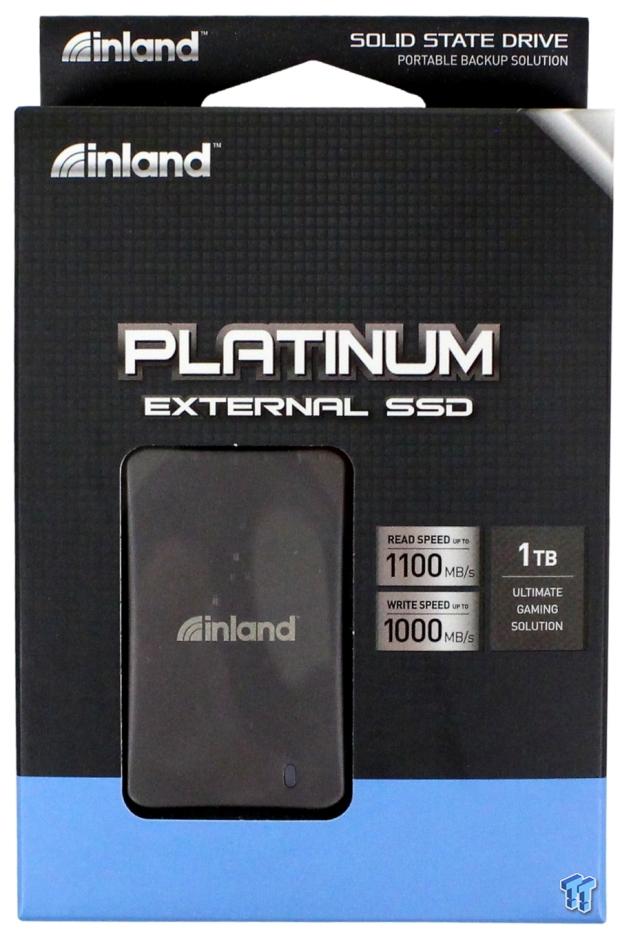 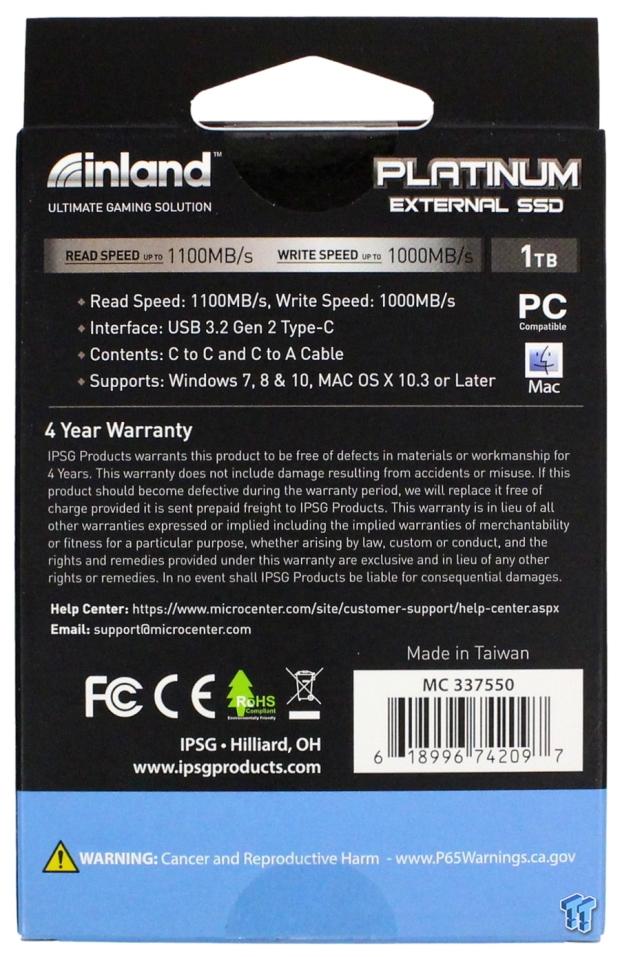 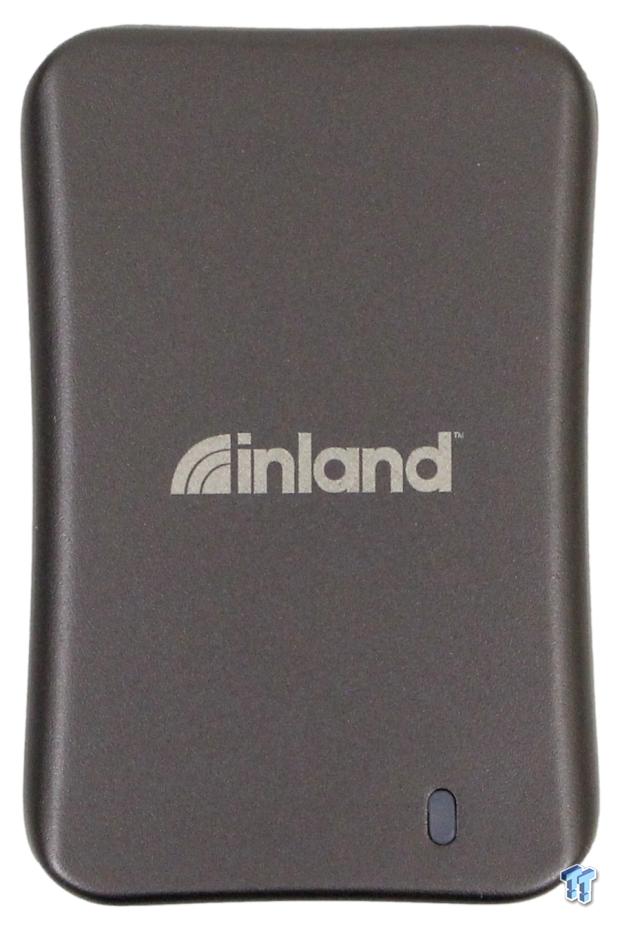 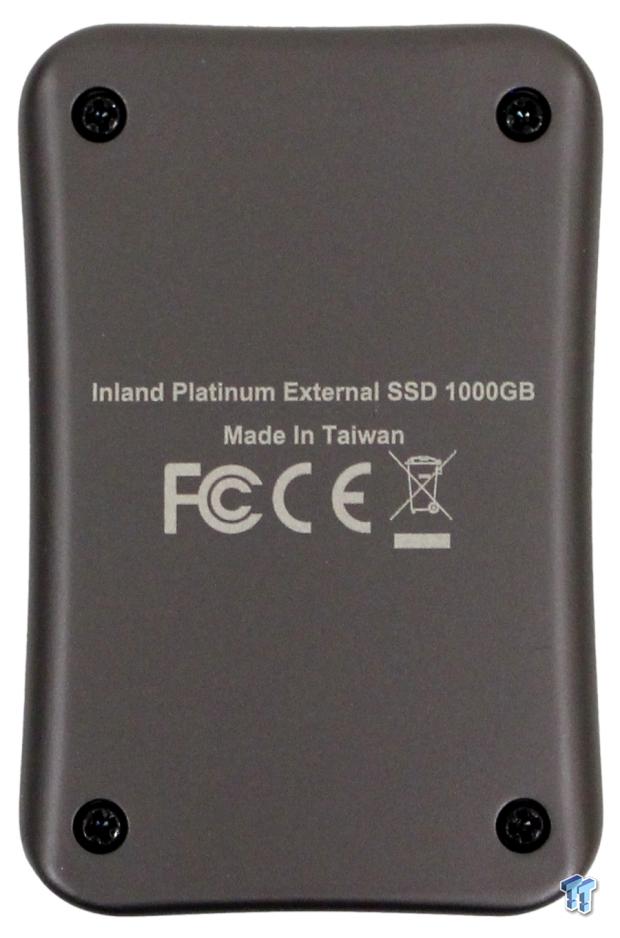 Micro Center's inland Platinum external SSD is compact and ruggedly constructed. The enclosure is made from 2 pieces of diecast metal alloy. The drive comes with two cables, Type-C to C and Type-C to A. 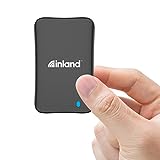 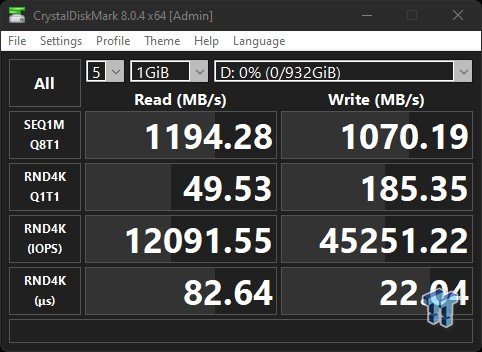 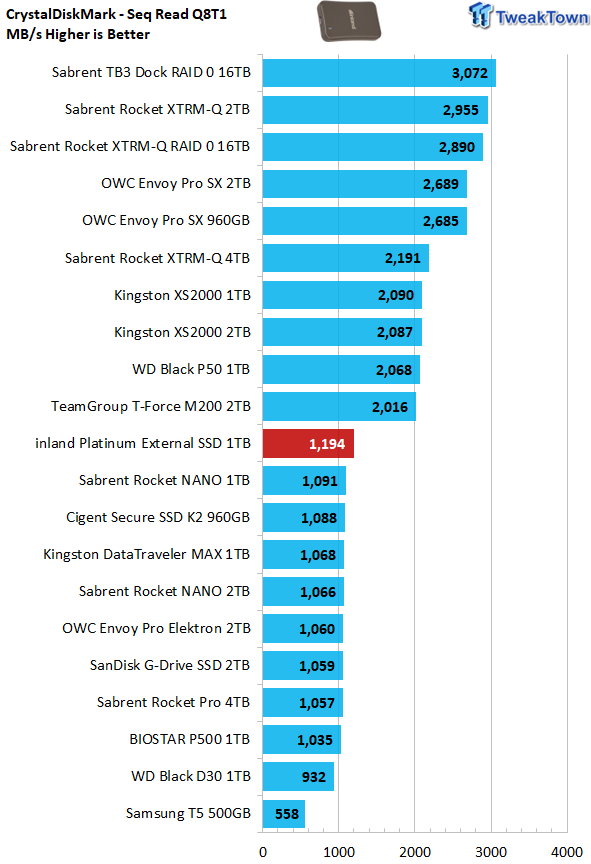 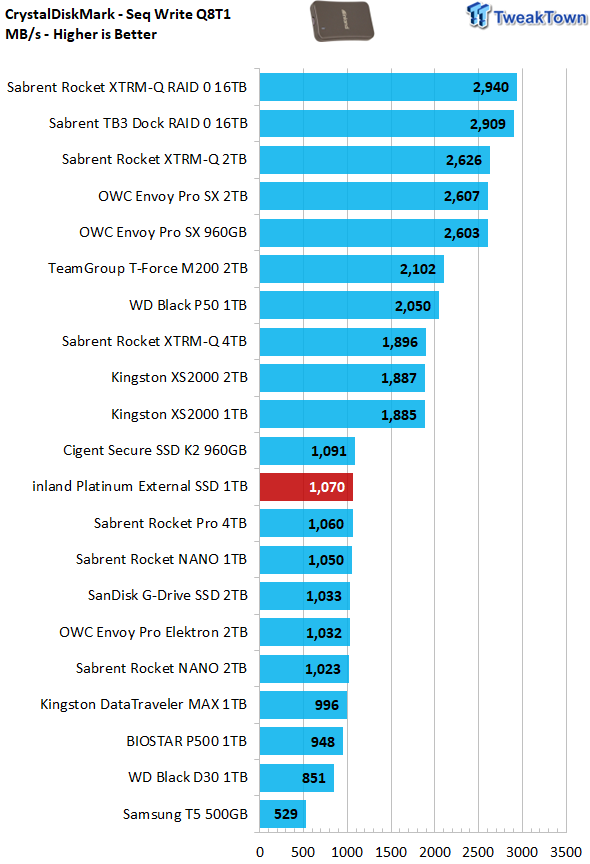 Hitting advertised throughput is no issue when the drive is slotted into a 3.2 Gen2 x2 Type-C port. We noted the drive is rated for speeds exceeding standard USB 3.2 10Gbps, so we decided to test it on a Gen2 x2 port. Sequential read throughput is the highest we've seen from a non-Thunderbolt or USB3.2 Gen2x2 interfaced portable. Excellent. 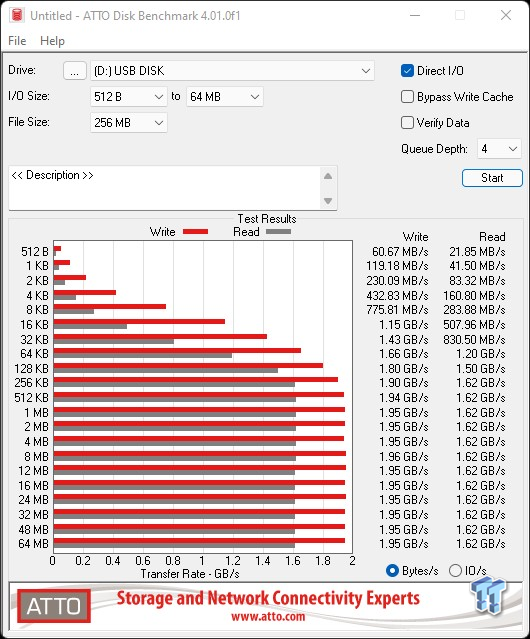 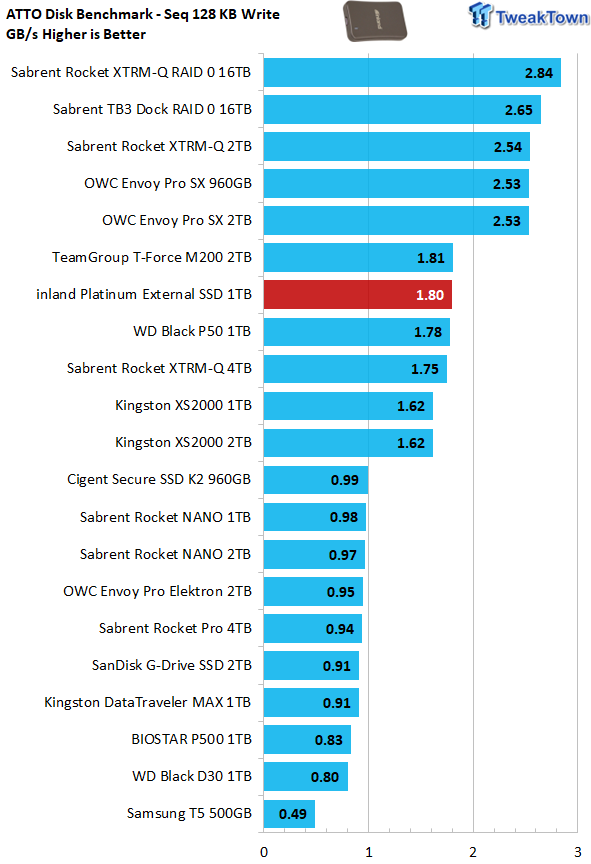 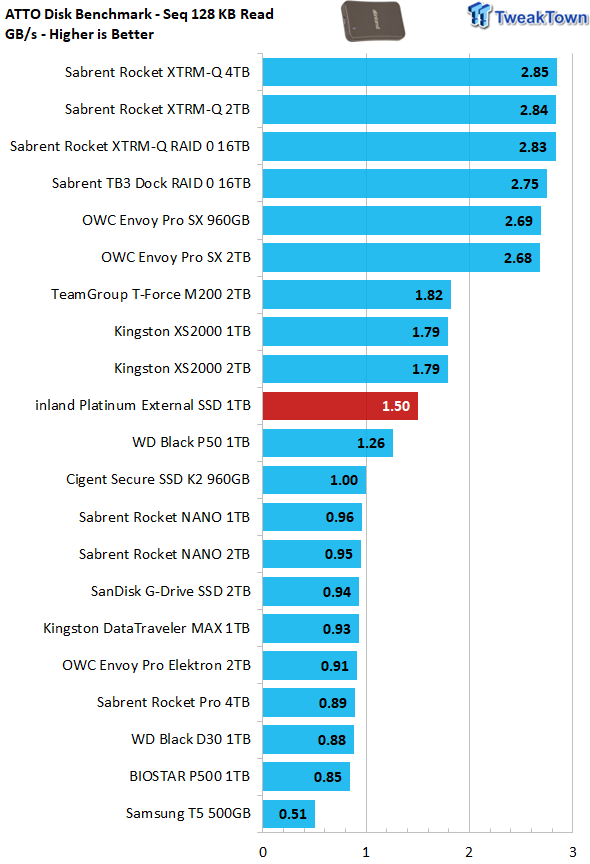 As ATTO demonstrates, if you happen to be dealing with compressible data, this native USB portable SSD can do it in the usual class-leading Phison fashion, which puts it right in there with the fastest USB interfaced SSDs ever made. Note: you will need to be running on a 3.2 Gen2 x2 host port to hit these speeds. 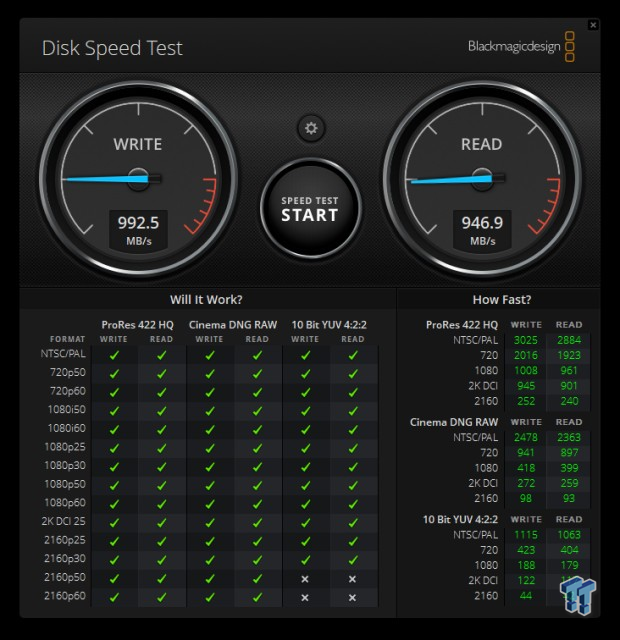 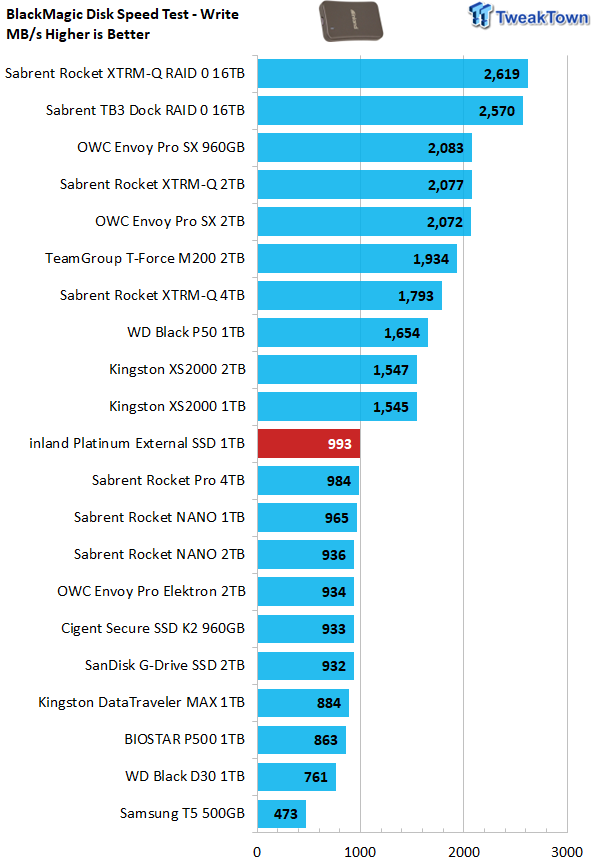 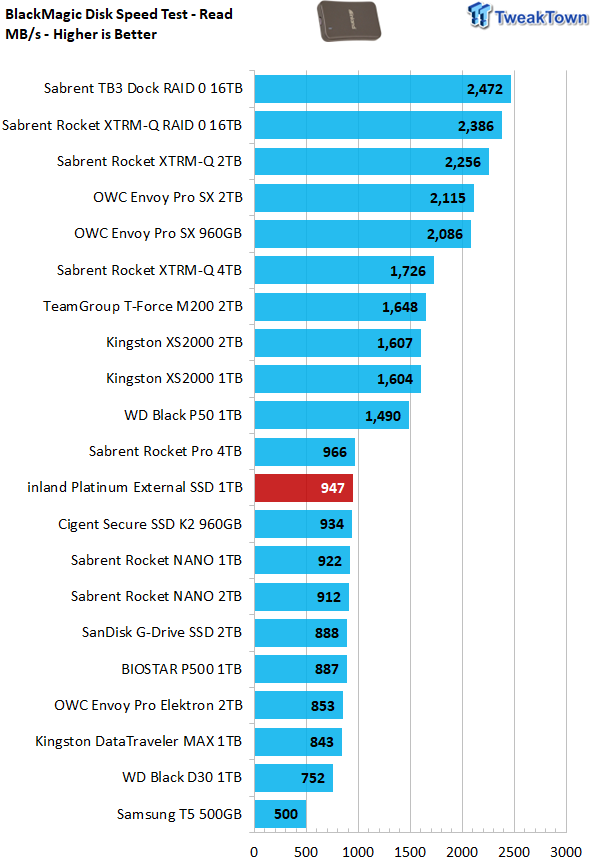 Our BlackMagic results indicate if employed for video content creation, the inland Platinum External SSD can do the job for all but the most demanding 10 Bit YUV 4:2:2 formats. Nice. 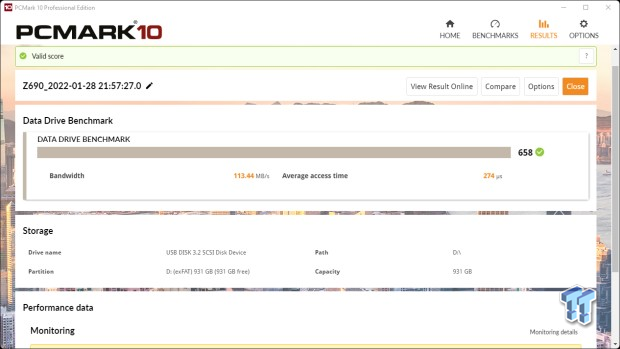 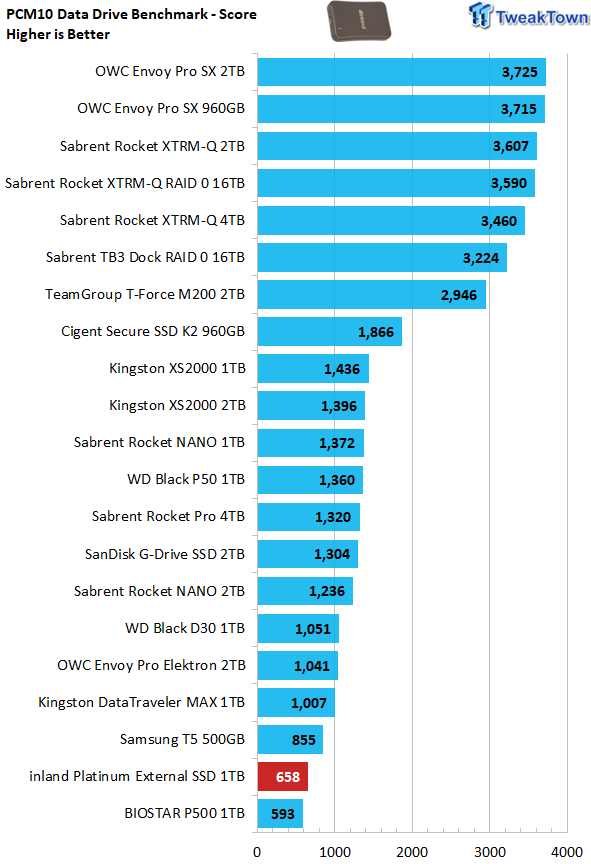 Pulling data drive duties with the inland Platinum External SSD isn't the best choice, as demonstrated by where the drive lands on our chart. 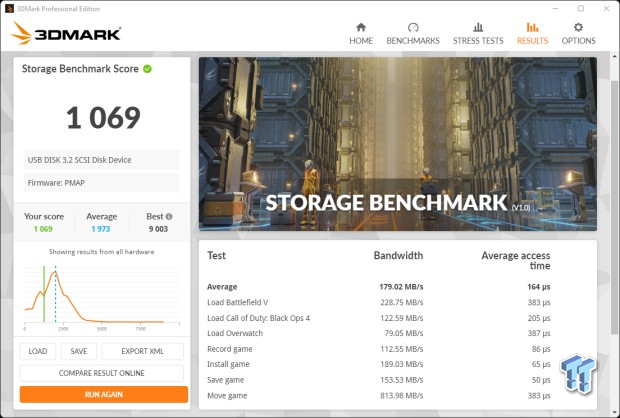 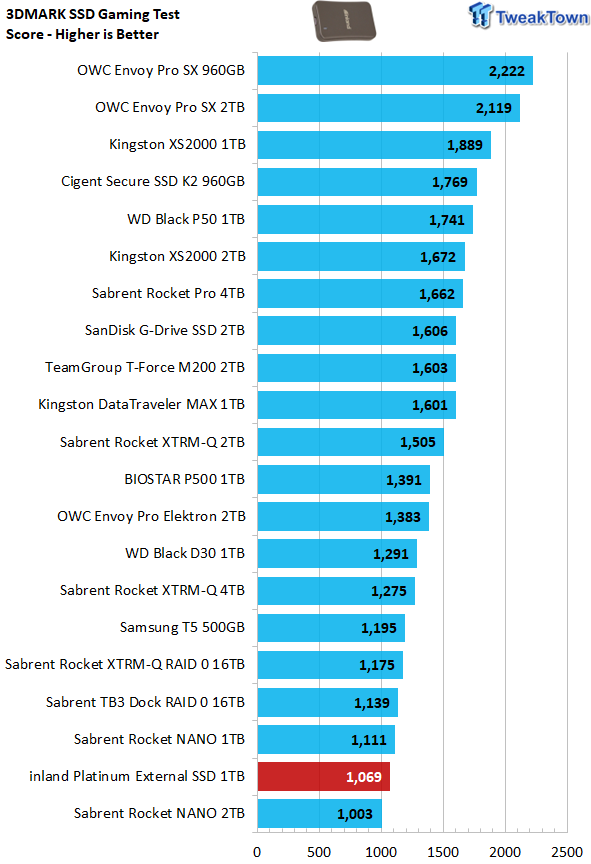 Gaming is a performance metric that matters to the majority of DIY consumers, especially to the enthusiast crowd that TweakTown caters to. We are now including gaming performance as a part of our external SSD reviews as using portable storage for gaming duties is very popular among avid gamers. Again, not a good use case scenario for our test subject. 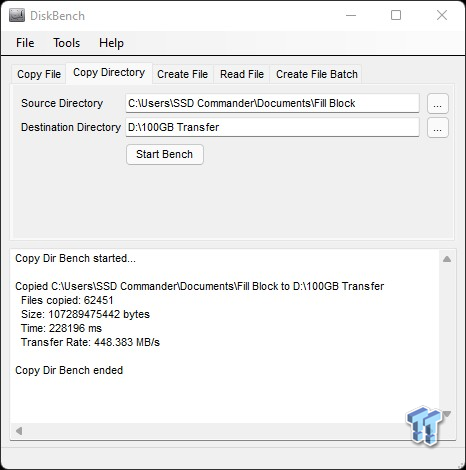 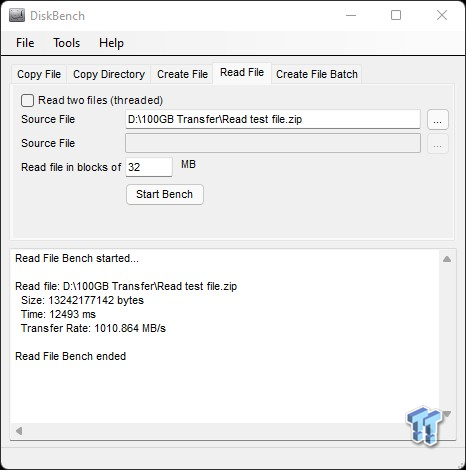 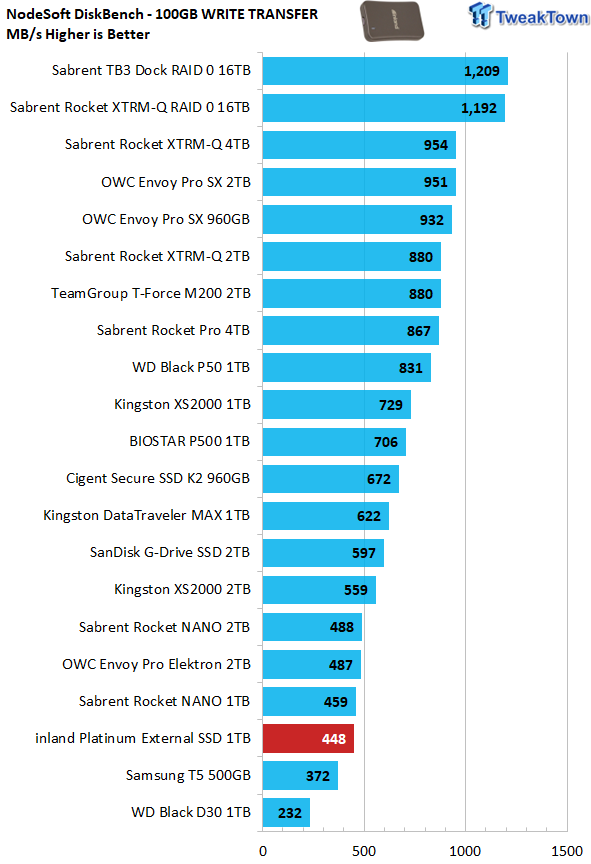 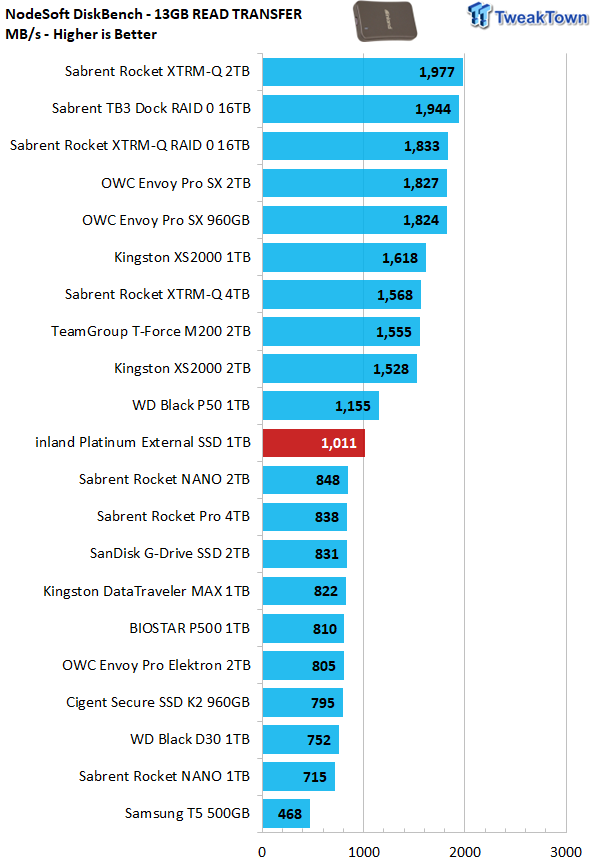 We brutalize our test subjects with our extremely hard-to-swallow 100GB data block. This data block is the same one we use for our internal SSD testing and is composed of more than 62K files. This is where the rubber meets the road for a portable SSD. Keep in mind that the use case scenario for the consumer space is write infrequently and read frequently.

Micro Center's inland Premium External SSD, even though not the best performing around, is, as we see it, one of the best you can get for the most important reason when choosing fast, portable storage.

Compatibility is king, and Micro Center's newest is the king of compatibility. For example, we have a Windows 11-based Z590 rig with a front panel Type-C Gen2 x2 port that literally nothing with a bridge chip will even run on (probably due to power delivery), even the XS2000. Although it functions, it won't give us full write speed with Windows 11. The inland Platinum? No problem whatsoever. It runs perfectly.

Based on its supreme compatibility alone, we find the inland Platinum External SSD deserving of our highest award. 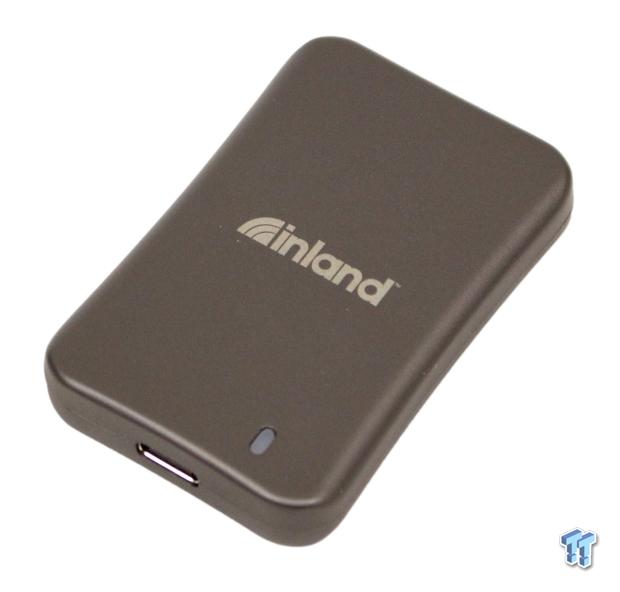 Compatibility is KING in the world of fast portable storage and the inland Platinum External SSD is the KING of compatibility.