Lately, we've been getting a wave of DRAMless SSDs arriving at the lab doorstep. Until just recently, we've looked down on DRAMless SSDs because they've historically sucked, but our attitude toward them has done a total 180 with the introduction of powerful Gen4 DRAMless SSDs. This new generation of DRAMless SSDs so far are fire, even capable of outperforming many full-on 7,400 MB/s capable Gen4 Hyper-Class SSDs. We never thought we would see the day, but it is upon us. After all, who could foresee little power-sipping 2.5-watt 4-channel DRAMless SSDs beating up on a whole host of power-hungry, fire-breathing 8-channel Hyper-Class SSDs? We sure didn't.

With a new outlook on DRAMless SSDs, we were excited to see Patriot's Gen4 DRAMless P400 hit retail channels. Hey, maybe this is another good one? A quick call to Patriot, and we had one arrive at the lab in no time. We weren't sure how the P400 would be configured. Still, we did suspect it would be another collaborative effort with InnoGrit seeing as how the Patriot's last significant SSD, the Viper VP4300 came forth from a collaborative effort with the upstart controller company.

Our suspicion turned out to be spot-on as Patriot's newest offering is indeed powered by an InnoGrit controller in front of a Micron flash array. In fact, it's the very same combo that first changed our attitude toward DRAMless SSDs. Patriot's P400 series is powered by InnoGrit's potent DRAMless IG5220 4-channel controller and arrayed with Micron 176 Layer B47R Fortis grade flash. Well, now, this should be good, so let's get this thing on the bench and see what it can do for you. 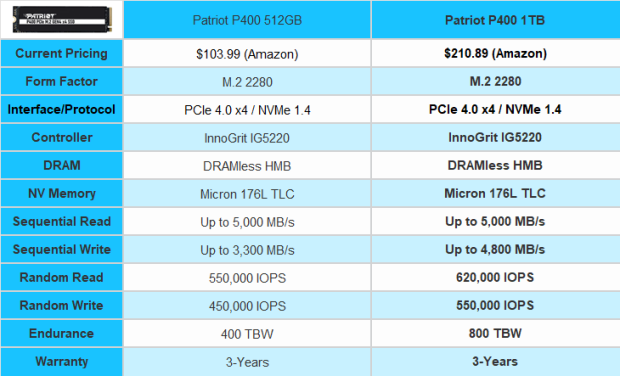 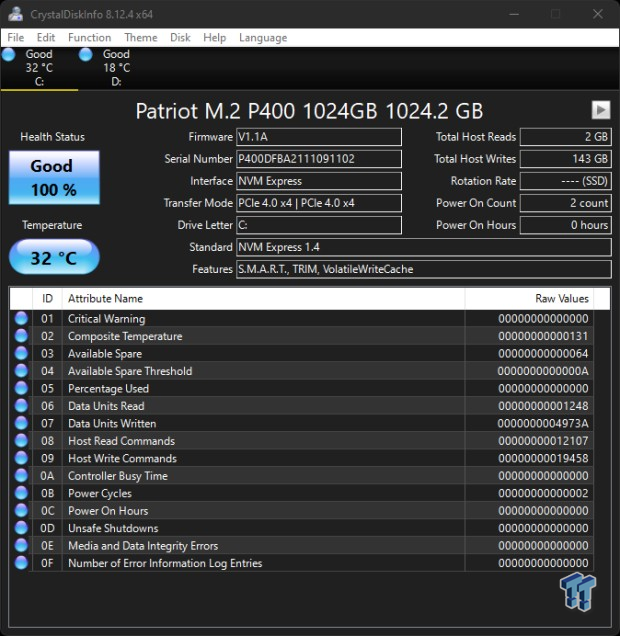 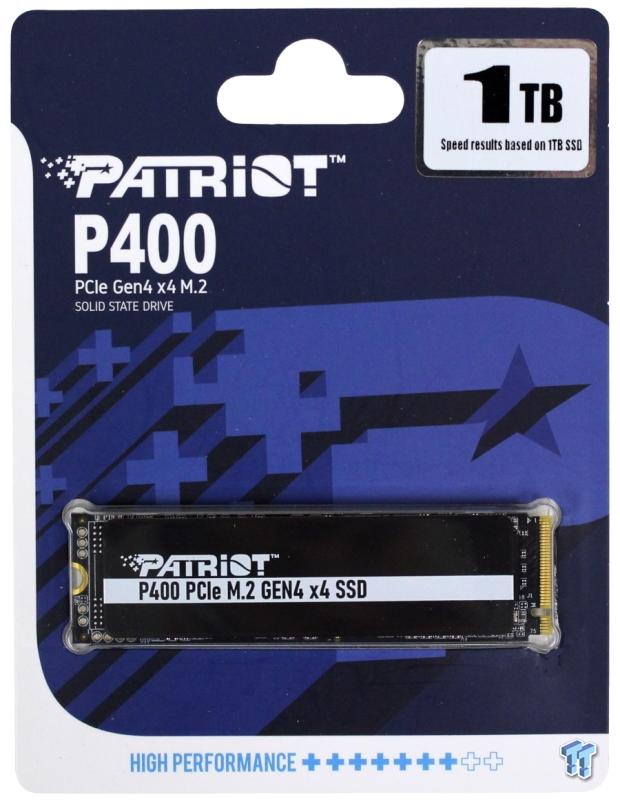 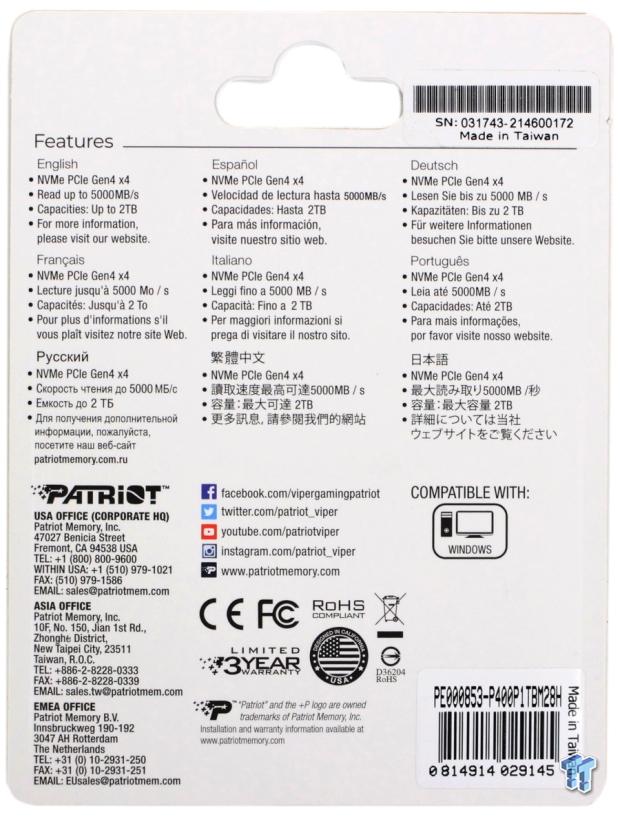 Everything looks on-point as far as stated performance capabilities and endurance are concerned, BUT those prices are way off the mark for what this SSD is. Not sure why the 1TB model would retail for $210, but something has to be off with that price point - it's $30 more than a 1TB VP4300 is selling for. Hopefully, Patriot will get that adjusted soon; they will have to if they plan on selling any P400's. 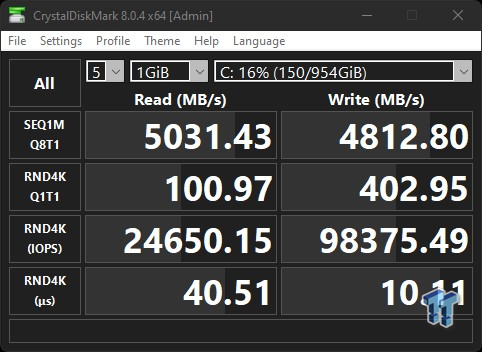 CrystalDiskMark verifies Patriots stated "up to "sequential specs for the P400. These numbers also verify that the P400 is controlled by an InnoGrit IG5220 controller. A 4K Q1T1 random read speed of 101 MB/s confirms the drive is indeed arrayed with Micron Fortis grade B47R flash. Excellent. 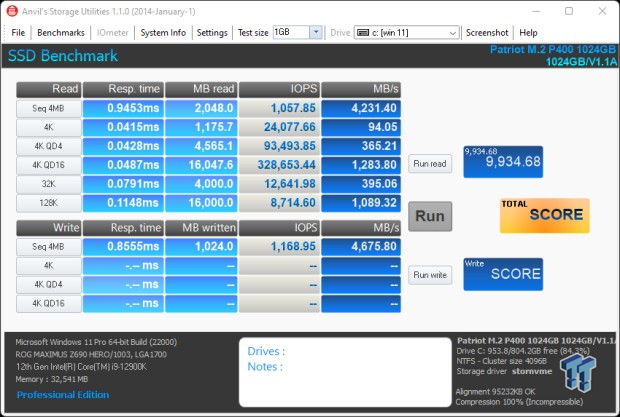 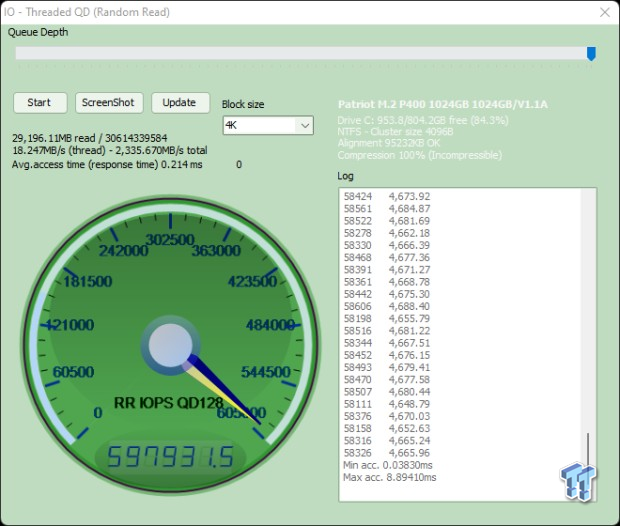 Read performance is always performance that matters, and here we get our first taste of the P400 punching above its weight, so to speak. As our chart shows, the P400 is outperforming a whole host of 7,000 MB/s capable SSDs. This becomes even more impressive when we consider just how much of the score here comes directly from sequential speeds, where the 7,000 MB/s capable SSDs have a huge advantage. 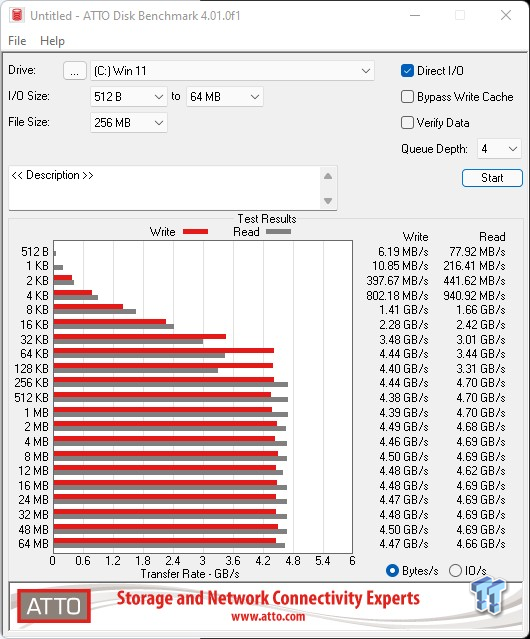 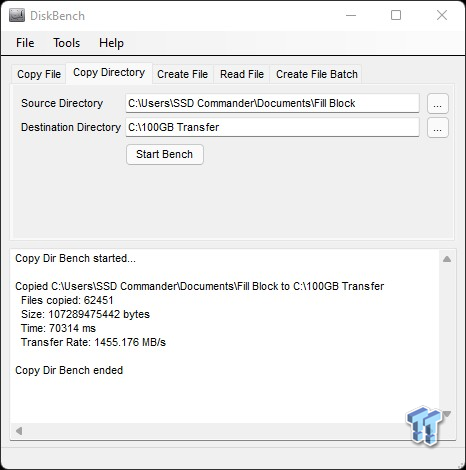 The P400 impresses here by quickly digesting 100GB of a crushing mix of data composed of more than 62K files. The P400 slots in directly above the SN770, which is our current performance champion for all SSDs available in the Americas. Mind-blowing for a DRAMless 4-channel SSD. 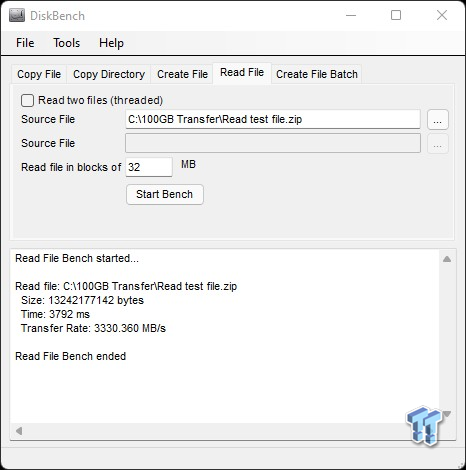 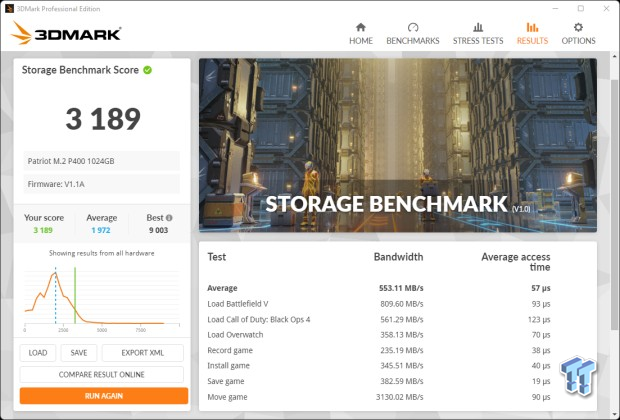 Gaming is a performance metric that matters to the majority of DIY consumers, especially to the enthusiast crowd that TweakTown caters to. We would like to see better results here for sure but totally expected for its hardware configuration. The P400 does prove to be equivalent or slightly better for gaming than Samsung's legendary 970 Pro for whatever that's worth. 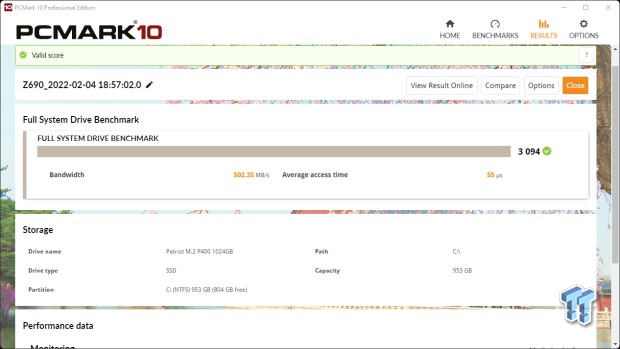 When we step back and take a broad overall view of this chart, and the 7,000 MB/s capable SSDs the P400 is beating, this result becomes more impressive than our chart represents at first glance. A DRAMless SSD that handles heavy consumer workloads is always impressive as we see it. 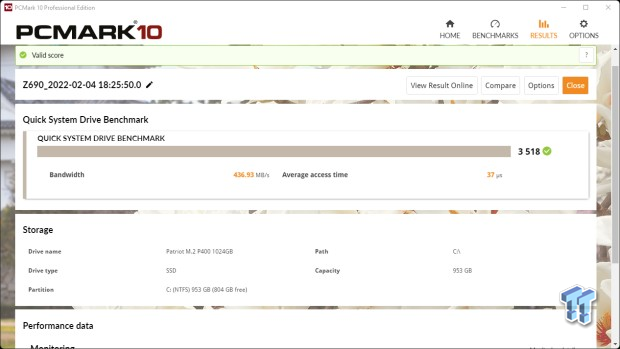 Again, if we dissect this result a bit, the P400 becomes a bit more impressive. We note this 4-channel DRAMless SSD is charting right in there with many 7,400 MB/s capable Hyper-Class SSDs, including Seagate's FireCuda 530.

Patriot's P400 is the third of the new generation PCIe Gen4 DRAMless SSDs we've tested to date. This drive, like the other two, delivers compelling performance that redefines the realm of DRAMless SSDs. DRAMless SSDs are not just for laptops anymore. They can, in many cases, perform as well or even better than full-blown eight-channel drives with onboard DRAM.

We rank SSDs in terms of overall user experience (performance where it matters most) as expressed by PCMark 10 storage and 3DMark gaming storage tests. We consider a user experience score of 11K or more to verify an SSD as a TweakTown Elite performer. Already having experience with this hardware configuration, we knew ahead of time that the P400 wouldn't have enough gas in the tank to become a member of the TweakTown Elite. Gaming performance holds back this hardware combo from becoming such. Nevertheless, a user experience ranking of 9,800 is nothing short of amazing for what this SSD is and better than many 7,000 MB/s capable SSDs. 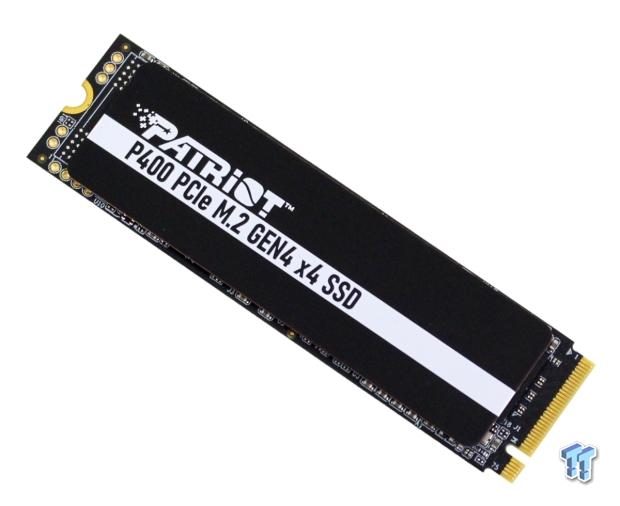 In terms of consumer workload performance and endurance, the P400 is a top-notch consideration for the majority of DIY consumers; however, its current price point is concerning. We believe that Patriot will indeed bring its pricing for the P400 in-line with similarly configured competing SSDs. Because we think this will happen sooner rather than later, we will award the P400 our silver award based purely on its performance alone.

Fast and power efficient, Patriot's P400 is an excellent choice for most consumers.