Bringing in the new year, Synology is revamping a few of their key appliances in the Plus and XS lineups: DS3622xs+ replaces the aging 3617xs, and the DS2422+ pushes both iterations of the DS2419+ to its end-of-life period. We were pleased to have the 2422+ in the lab for a little over a week for testing and evaluation.

Physically, the DS2422+ shares the same chassis as the previous model. Connectivity has been revamped slightly; we still have four 1Gbe ports lined up on the rear of the unit, along with USB 3.2 and the COM port. Expansion uses an SFF 8644 instead of the SFF 8470 connection on previous units. 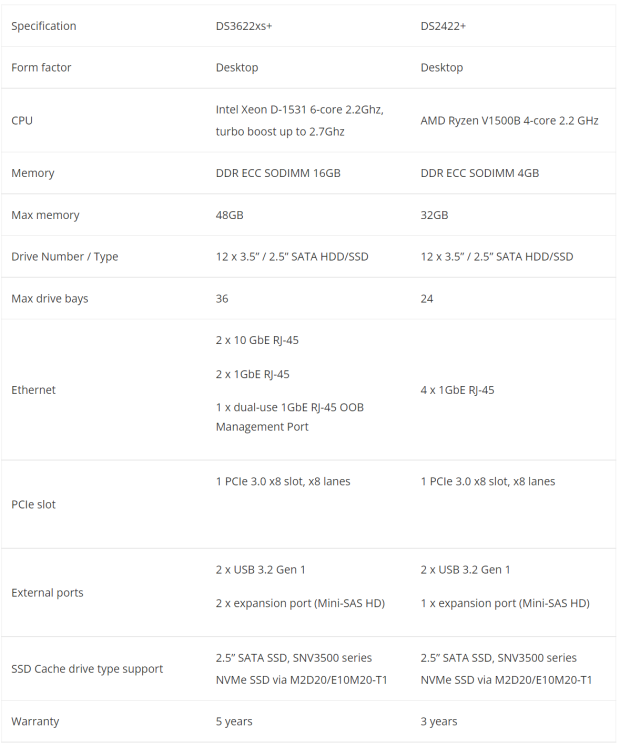 As far as hardware goes, the new DS2422+ has been upgraded ever so slightly from the Intel Atom C3538 quad-core to the AMD Ryzen V1500B. It still uses DDR4, 4GB by default, upgradable to 32GB via SO-DIMM slots. 2422 is a twelve-bay platform, both 2.5" and 3.5" drives supported additional expansion allows you to stack on another twelve bays with the DX1222. 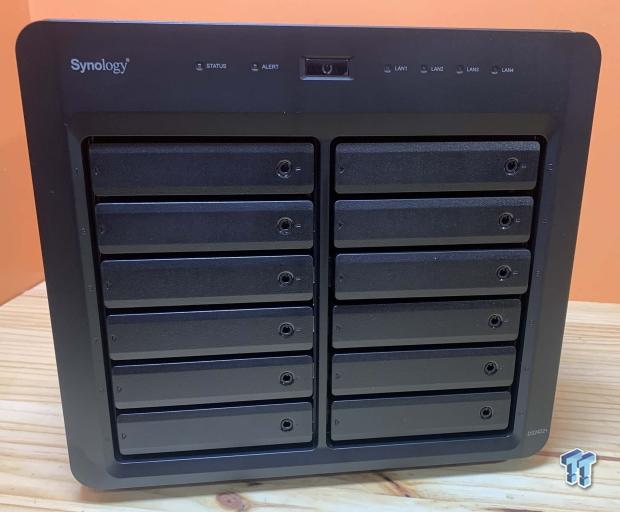 The DS2422+ has the familiar DiskStation appearance. Six bays stacked on either side, power button, and required LEDs up above. Each tray has a locking mechanism. 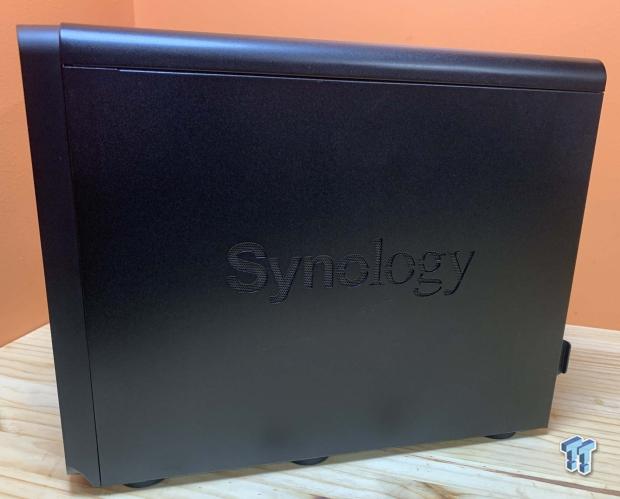 The side has a mesh logo stamped into the panel. 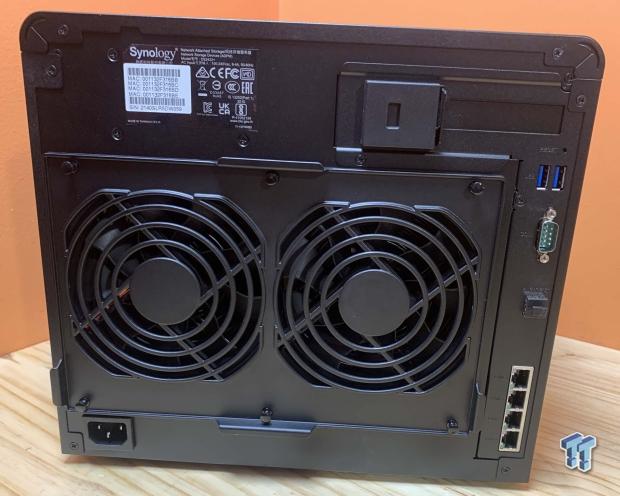 On the back, we have the I/O setup; four Gbe LAN ports, USB 3.2 at the top, and expansion between. 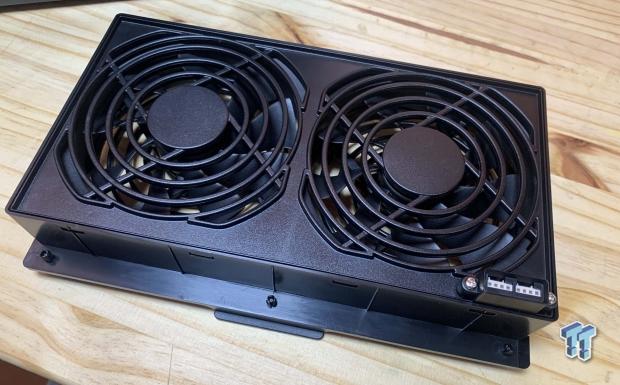 The DS2422+ uses a module for the cooling fans, easily replaceable without taring down the entire chassis. 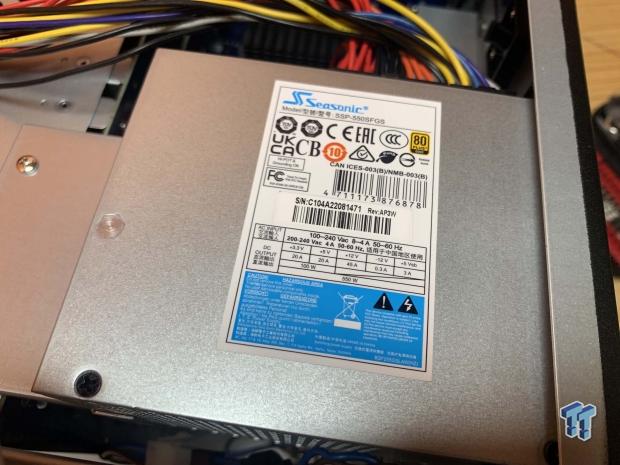 The power supply is a Seasonic 550W unit. 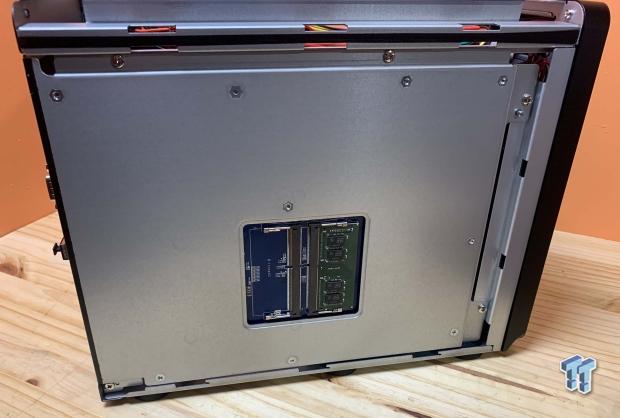 Both the top and two side panels can be removed individually. The left side panel hides the two SO-DIMM slots. 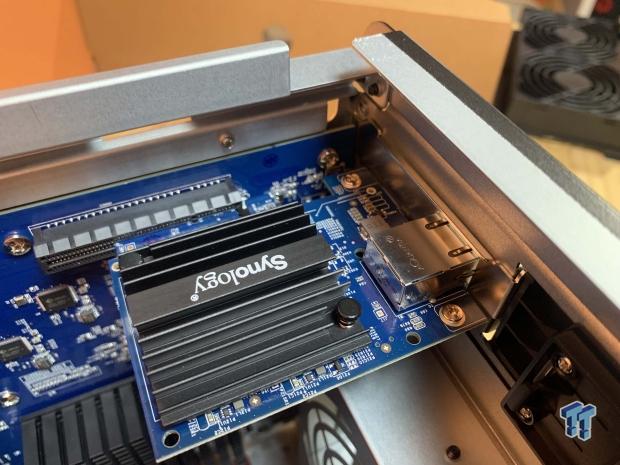 For testing, we installed the Synology 10Gbe adapter.

Thanks to Seagate, we also stacked in four 20TB IronWolf Pro drives! 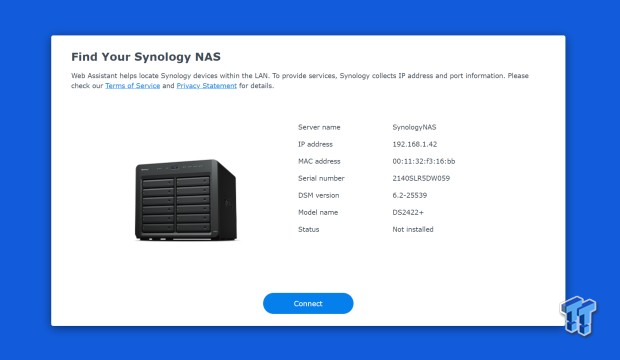 I initialized the setup using the find.synology.com address, allowing the script to search my network for DiskStation units. Seen above, we have the 2422+. 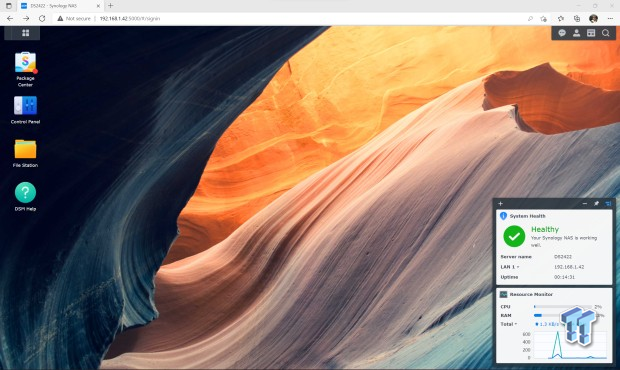 DSM 7.0 was installed during setup; we configured the NAS with our four drives in RAID 0 to start. The desktop has been slightly revamped. Widgets are still available on the right pane, while a few new icons have been situated on the desktop. The four-cube icon top left will lead us to the pulldown menu in our next image. 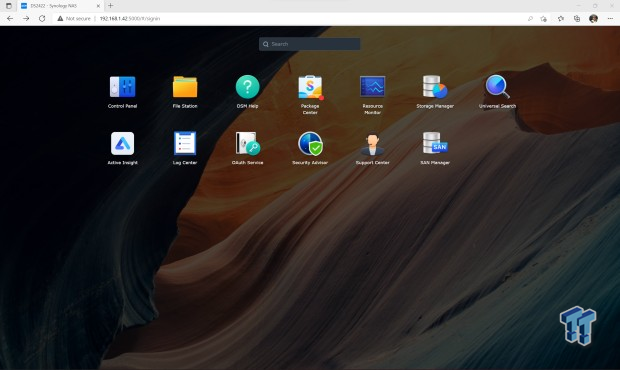 The pulldown menu gives you quick access to the control panel along with any apps you have installed. 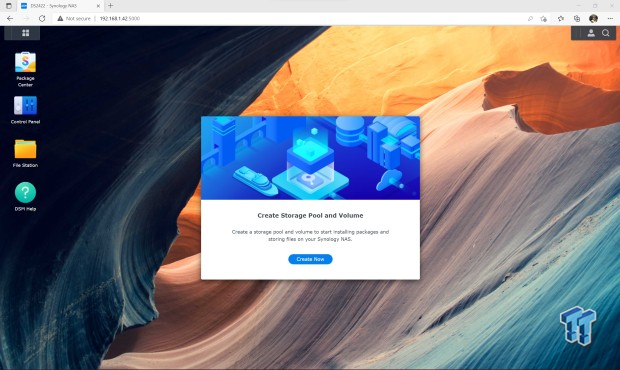 Storage Manager offers a wizard to aid the setup of your drives. 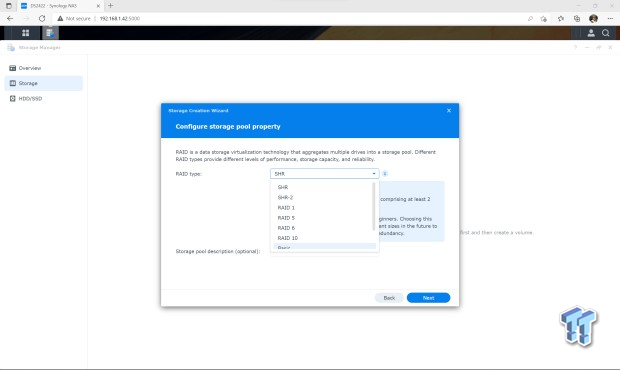 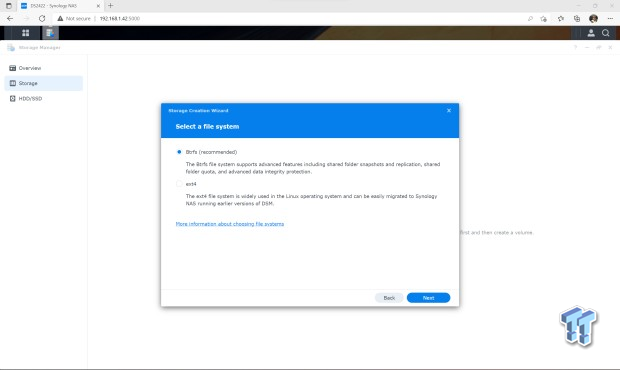 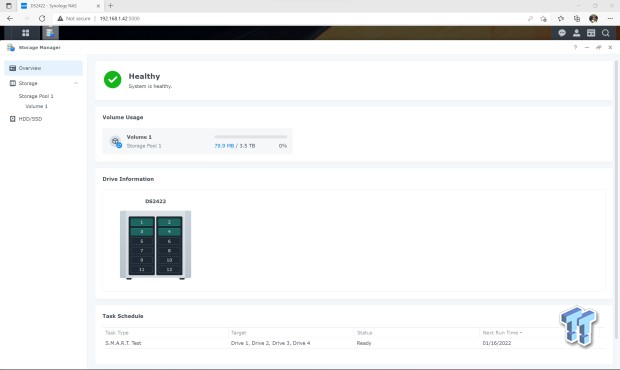 Storage Overview gives you a picture of any volumes you have created, the location of the drives, and tasks for the volume. 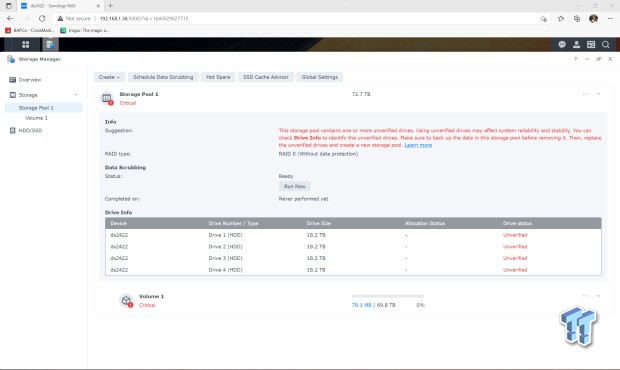 Storage Pool will show you the model of drives you have installed. We have 20TB IronWolf Pro. 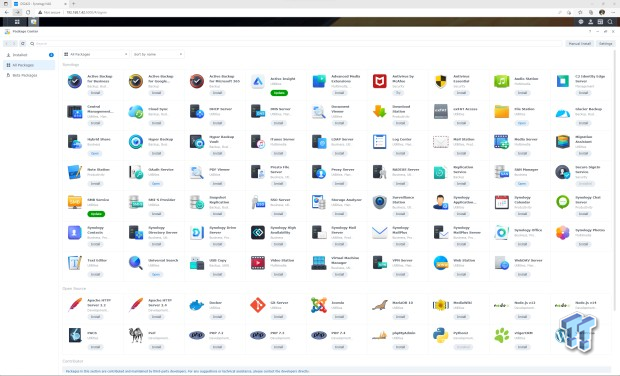 The package center includes a plethora of apps. We can show all the Synology apps above and a few open sources towards the bottom. 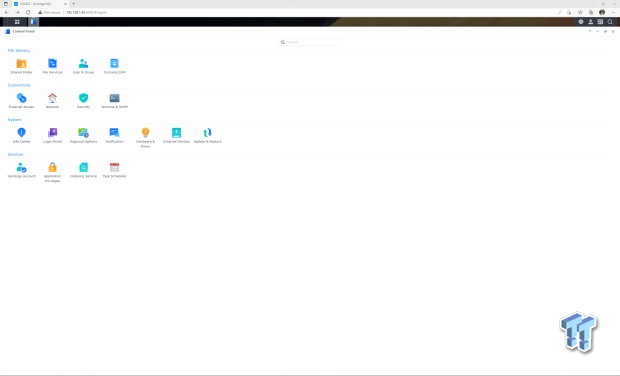 Control Panel includes all the options needed to configure the hardware of the NAS as needed.

I went for a direct approach to testing the performance of the DS2422+. We are using 10Gbe in both the NAS and our test system, direct connection with no router or switch in between. 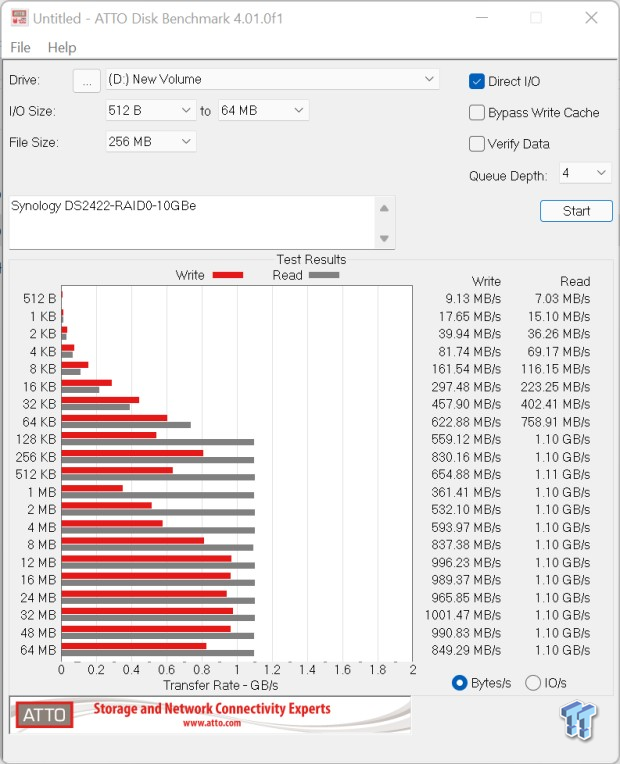 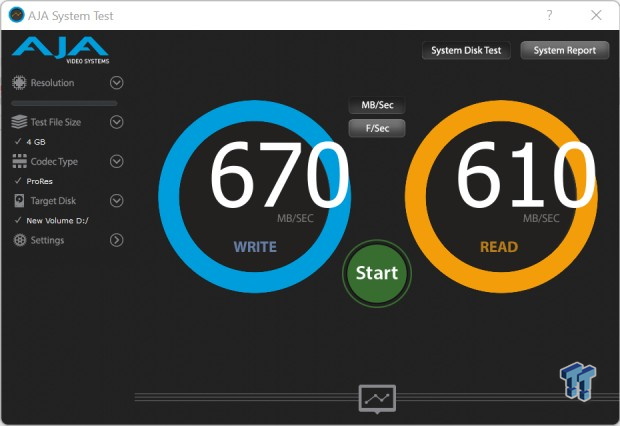 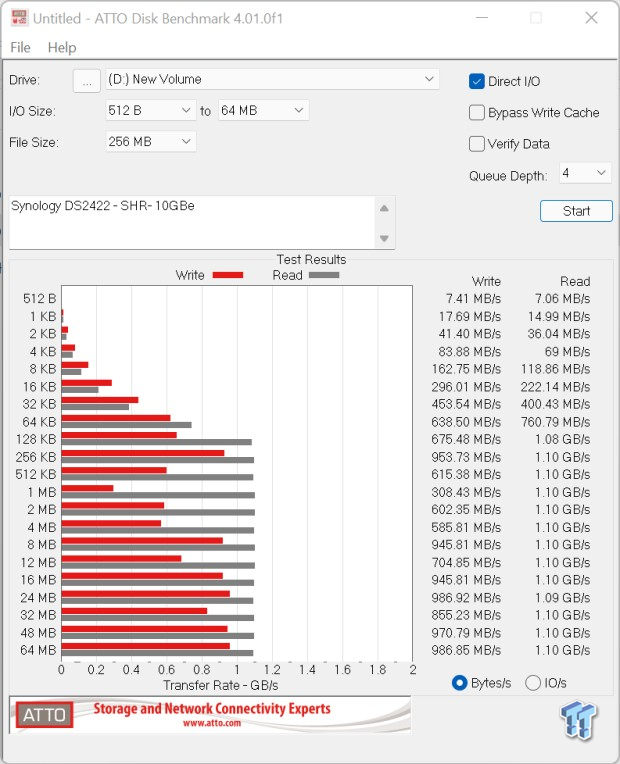 Setting the drives up using Synology SHR, we didn't notice much of a performance drop. Read performance still at 1.1 GB/s, writes stabilized a little more to 980 MB/s. 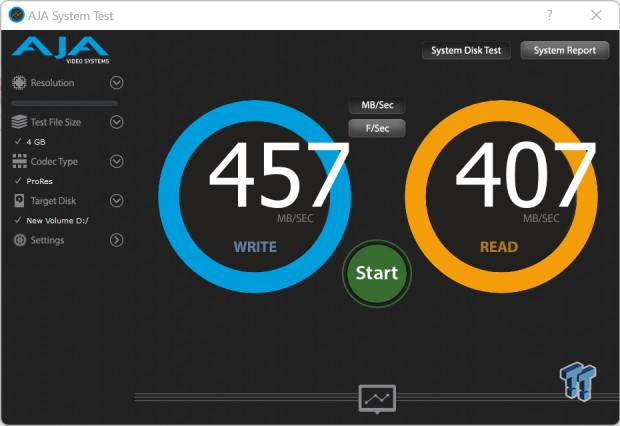 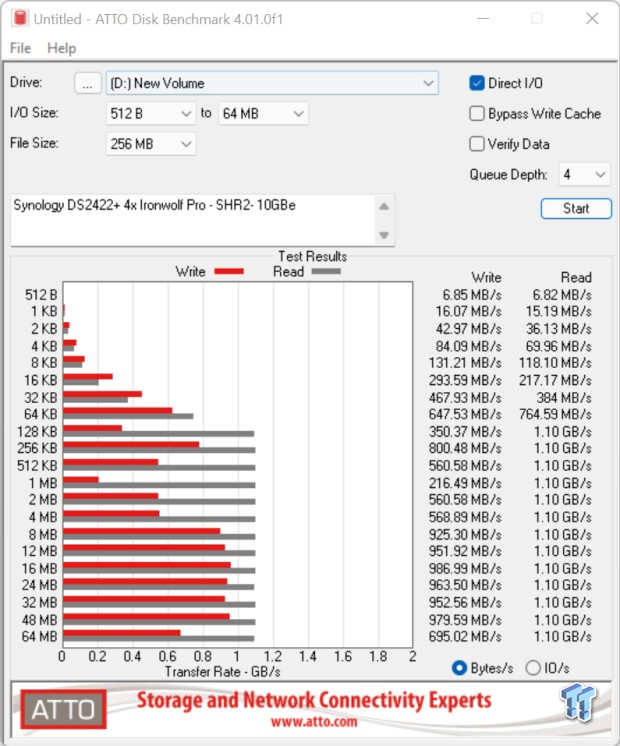 The DS2422+ was great in testing. As expected, we were easily able to saturate the 10Gbe adapter with our IronWolf drives. Build quality appears to be on par with the 2419+, with nothing really changing apart from the expansion port being swapped to accommodate the new DX1222 expansion chassis.

Performance numbers hit 1.1GB/s read in RAID 0, SHR, and SHR2. Write performance was up and down based on file size; smaller file sizes seemed to stick around 5-600 MB/s while anything larger than 24M was upwards of 950 MB/s.

DSM7, for me, is where the issues begin. I last tested the DS1821+ in March of last year. It appears, since then, Synology has gone through its standard update process, releasing DSM7 to the public.

With this launch, it seems a pseudo-DRM has been added that heavily restricts drives that are not on the compatible drive list. The issue with this, the only drives on that list are Synology's HAT and SAT series of drives, and further, when using drives not on this list, you don't get drive alerts, S.M.A.R.T., bad sector, or drive temperature statistics.

If a drive is failing, you will not know until the drive is dead; this in itself is a huge problem for consumers that typically migrate drives from older systems to the new models as they are most often NOT using Synology branded drives and will fall into this "trap" unexpectedly.

For me, with years of experience with these NAS systems, it seems like a bullshit move from what is considered one of the best NAS vendors on the market. What's worse is they were one of the first to support Seagate, implementing its advanced drive diagnostic platform, IronWolf Health Manager. We only hope Synology reverses this course and adds more drives to the "compatibility list." 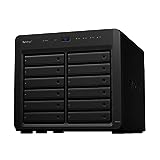 The DS2422+ is a fantastic appliance for consumers that don't mind buying into Synology's own HAT/SAT drive lineup.