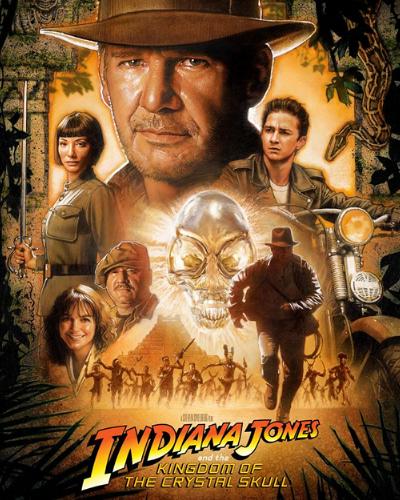 I normally wouldn't review a theatrical release for TweakTown, but for Indiana Jones, I will make an exception.

For franchise fans, there will be two burning questions.

Is it as good as the originals? :-
Yes, and no. It's better than Temple of Doom, but inferior to Raiders and Last Crusade.

Is Harrison Ford too old for this shit? :-
Nope. He looks pretty damn good for his age and I didn't disbelieve his stunts.


I've always been a pretty big fan of Indiana Jones and I have followed the progress of the latest installment, Indiana Jones and the Kingdom of the Crystal Skull with great interest. It's great to see such a legend back on the silver screen, like catching up with an old friend. I particularly enjoyed one nod to Raiders, which I won't spoil here. Suffice to say it near made me defecate myself in nerd-dom.

Crystal Skull works best when it sticks to the Indiana Jones formula. One particular sequence which has Jones stuck in a Nevada test site that is just about to go nuclear; is a blast, pardon the pun.

Unfortunately, the rollicking fun start soon gets bogged down in talky disposition, and as the film progresses I find myself having less fun. Action sequences that should be rousing, end up not knowing when to stop (the jungle car chase) and the puzzle solving and plot building mechanisms soon disintegrate into meaningless babble. This is just not how an Indiana Jones film should be.

Ultimately, I came out of the film not knowing what to think. It certainly takes the franchise in a new direction, but one in which my level of disbelief, on a few fronts, is stretched past my limit. What's more, I also can't put this down to a 'too high expectations' boat, because they weren't really that high.

Where Indiana Jones does succeed however, is that it at least looks like an Indiana Jones film. Despite many of the crew having retired, or not being available, Spielberg and Lucas have done a great job emulating the look of the originals, from the occasional use of soft focus, to the camera work, to the sound effects (yes, the Wilhelm scream has been bought out of retirement too). It's also great that John Williams returns to provide the score, even if he does fail to introduce any really memorable audio cues.

When it's all said and done, I still for the most part enjoyed this latest outing. Despite my issues with the film, I look forward to adding it to my Blu-ray collection later this year (make a big-ass Blu-ray boxset for Christmas '08 guys), and I would still like to see a fifth installment, so long as they can make another film more befitting the status of the talent available, and the name of the franchise.