All NewsBusiness, Financial & LegalCases, Cooling & PSUContests & GiveawaysCPU, APU & ChipsetsDealsDisplays & ProjectorsGamingMotherboardsScience, Space & RoboticsStorageVideo CardsVirtual & Augmented Reality
All ReviewsAll ArticlesAudio, Sound & SpeakersCases, Cooling & PSUCPUs, Chipsets & SoCsComputer SystemsDisplays & ProjectorsGamingMotherboardsNetworkingPeripheralsRAMStorageVideo Cards
GuidesGamingAsk the ExpertsNewsletterAboutForums
RTX 3090 TiRTX 4090Diablo 2GTA 6Halo InfiniteElon MuskRTX 3080HDMI 2.1
Celebrities & Entertainment
When Paramount Pictures announced plans to join Blu-ray once again, there was a huge HD-DVD hit that was strangely absent from the lineup - Transformers, and since then Paramount have been quiet on the issue, with speculation they may be holding back the title for the theatrical release of Transformers 2 next July.

However now, Paramount UK have begun shipping Blu-ray elements to the British Censorship office (BBFC), a neccessary step before being able to release a title in the UK. This is always a good indicator that a DVD or Blu-ray is soon to be released.

You can find the breakdown right here. 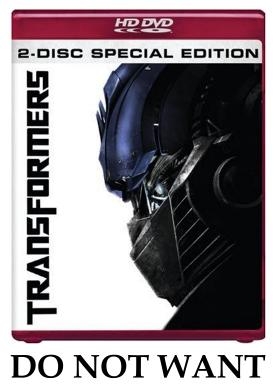