All NewsBusiness, Financial & LegalCases, Cooling & PSUContests & GiveawaysCPU, APU & ChipsetsDealsDisplays & ProjectorsGamingMotherboardsScience, Space & RoboticsStorageVideo CardsVirtual & Augmented Reality
All ReviewsAll ArticlesAudio, Sound & SpeakersCases, Cooling & PSUCPUs, Chipsets & SoCsComputer SystemsDisplays & ProjectorsGamingMotherboardsNetworkingPeripheralsStorageVideo Cards
GuidesGamingAsk the ExpertsNewsletterAboutForums
RTX 4090Windows 11Halo InfiniteBattlefield 2042Elon MuskGTA 6RTX 3080HDMI 2.1
The folks over at Chile Hardware managed to get what they are a calling a real first photo of the upcoming ASUS Eee Box B202. It is the desktop version of the hugely popular Eee PC notebook computer that took the world by storm when it was released last year.

The report suggests that ASUS will announce and release the sub-1kg Eee Box B202 with mass resemblance to the Nintendo Wii at Computex in Taipei early next month. We will be there to get the first shots of the product for you.

Chile Hardware claim that the B202 will pack in an Intel Atom processor, Intel 945 Express chipset based motherboard along with 1GB of DDR2 memory and 80GB hard drive. It is also no surprise that the operating system of choice will be Linux but as with the Eee PC, it will probably be followed with a version that includes Windows XP.

Whoever took the spy shot needs to upgrade from their web camera but here is the first shot of the ASUS Eee Box out in the wild. 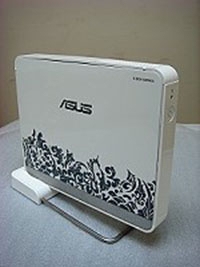 You'll see much more of this and probably other similar products next month from Computex. Stay tuned people!