All NewsBusiness, Financial & LegalCases, Cooling & PSUContests & GiveawaysCPU, APU & ChipsetsDealsDisplays & ProjectorsGamingMotherboardsScience, Space, Health & RoboticsStorageVideo Cards & GPUsVirtual & Augmented Reality
All ReviewsAll ArticlesAudio, Sound & SpeakersCases, Cooling & PSUCPUs, Chipsets & SoCsComputer SystemsDisplays & ProjectorsGamingMotherboardsNetworkingPeripheralsRAMStorageVideo Cards & GPUs
GuidesGamingGPUsSSDsNewsletterAboutPrivacyForums
PlayStation 5 ProRX 7900 XTXAMD Zen 4RTX 4090RTX 4080RTX 4070GTA 6Elon MuskHDMI 2.1
TweakTown was given the opportunity to be the first publication in the world to see and photograph Gigabyte's upcoming motherboard targeting extreme overclockers, the EP45 Extreme. This board will be quite different to the rest of Gigabyte's P45 based motherboard and the board we were shown was the first board off the production line and as such, is a very early sample. The most obvious feature of this motherboard is the humongous heatsink sitting above the first PCI slot. This is based on a similar construction idea to Gigabyte's passive Silent-Pipe 3 and works the natural convection method and draws hot air out of the case without any noise.

In saying that, Gigabyte isn't really intending for this motherboard to go into a case, as there will be a fairly limited run of these boards. The EP45 Extreme is Gigabyte's answer to the Foxconn Black Ops board, although with a different chipset and as such is intended for bench use. This is why Gigabyte is planning to supply a LN2 duct for the CPU and a watercooling module for the chipset. The large heatsink can be removed, as it is secured with four screws on the top of the chipset cooler. This is partly done to make it easier to ship and transport the board, but also to allow for the watercooling module to be attached in an easy way. 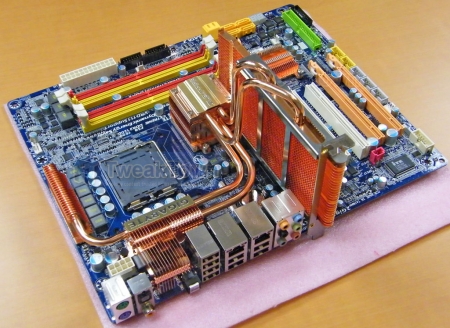 Click to enlarge
As you can see from the picture above, there's an additional part of the heat pipe which has a heatsink that sticks out in the I/O area and this has been done to enhance the cooling of the PWM area. The board has a 12-phase PWM and the memory and northbridge has a two phase PWM design. Again, as you've most likely noticed by now, the rear I/O is different from what Gigabyte normally does and this is the first board we've seen from Gigabyte that has an external clear CMOS button. The final board will also have onboard power and reset switches, but they were missing from this early sample, but if you look at the area close to the Post 80 debug LED you'll notice that there's space for these switches to be installed.

In terms of more general features, the EP45 Extreme has six SATA ports, no extra controllers are included, mostly due to space limitations, a single IDE connector, eight rear USB 2.0 ports with headers for a further two, two PS/2 ports, dual Gigabit Ethernet, 7.1-channel HD audio with optical and coaxial S/PIDF out, three headers for FireWire ports, three PCI slots and three x16 PCIe slots. However, the two light orange x16 slots aren't full x16, as the top slot of the two will work in x8 when the motherboard is set to use CrossFire, while the bottom slot is a permanent x4 slot. Finally the board also has Gigabyte's Dual BIOS and a new revision of DES that we'll cover more later. 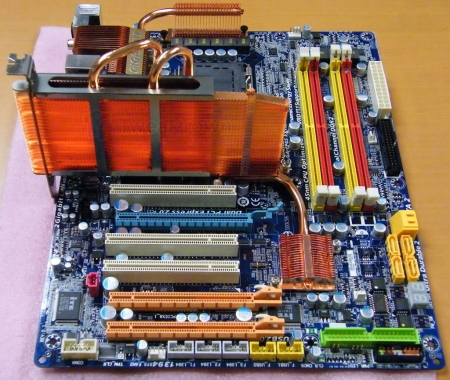 Click to enlarge
Gigabyte is also working on an updated version of the EasyTune software and version 6 looks like a massive improvement over the previous versions. Gone is the fiddly UI and strange looks and instead Gigabyte has gone for a very clean and sleek UI. It's still in beta, but we got a first screenshot of what it'll look like. The main tab provides information much like CPU-Z, although the layout is somewhat different. The memory tab is again similar to the memory information in CPU-Z, while the Tuner tab is where all the action takes place. You can tweak just about any setting from here, including Voltages. The Graphics tab allows you to overclock your graphics card, which could be useful if you don't have a Gigabyte graphics card that supports the new HUD overclocking utility. The Smart tab controls the CIA2settings as well as the fan settings. Finally the HW monitor tab monitors the fan speeds and temperatures and allows you to set alarms etc. 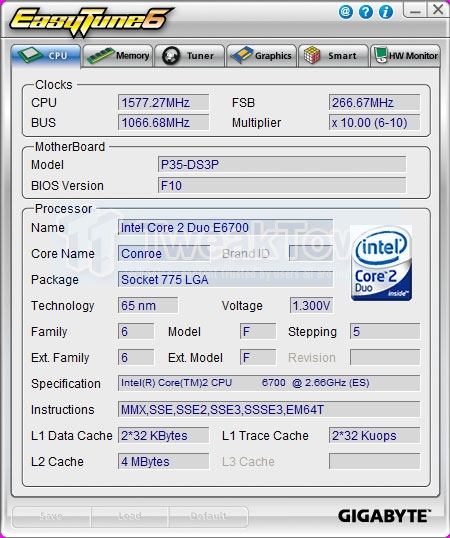 You can also save various profiles and load them as required. We'll bring you more information about EasyTune 6 as Gigabyte brings out a more stable version. Although the good news is that EasyTune 6 will work with all of Gigabyte's P35, X38 and X48 boards as well as its P45 boards.
Newsletter Subscription