G45 3D performance has already been reported to be three times faster than that of the previous Intel G33 Express chipset which is DX9 only. G45 will also have hardware accelerated MPEG2, VC1 and AVC decoding for playback of HD movie content and Blu-ray discs along with built-in HDMI and DisplayPort connectors. It also gets OpenGL 2.0 support along with Windows Vista Premium certification. 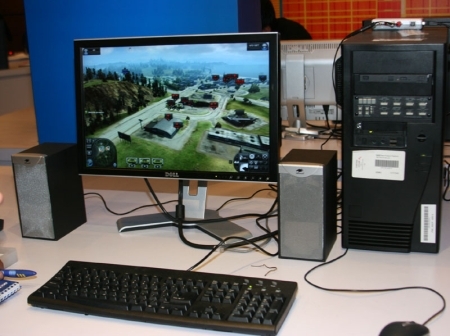 Intel is telling press over in China at IDF that G45 will provide a "smooth" DX10 gaming experience with its 800MHz core clocked X4500HD onboard graphics. It also claims that its DX10 driver will be ready once G45 based motherboards begin shipping. There was a demo of a G45 based system running World in Conflict DX10 and it was said to be running rather well. There was no word on frame rates.

You can read the full article over at PC Watch translated from Japanese to English right here (thanks Google).